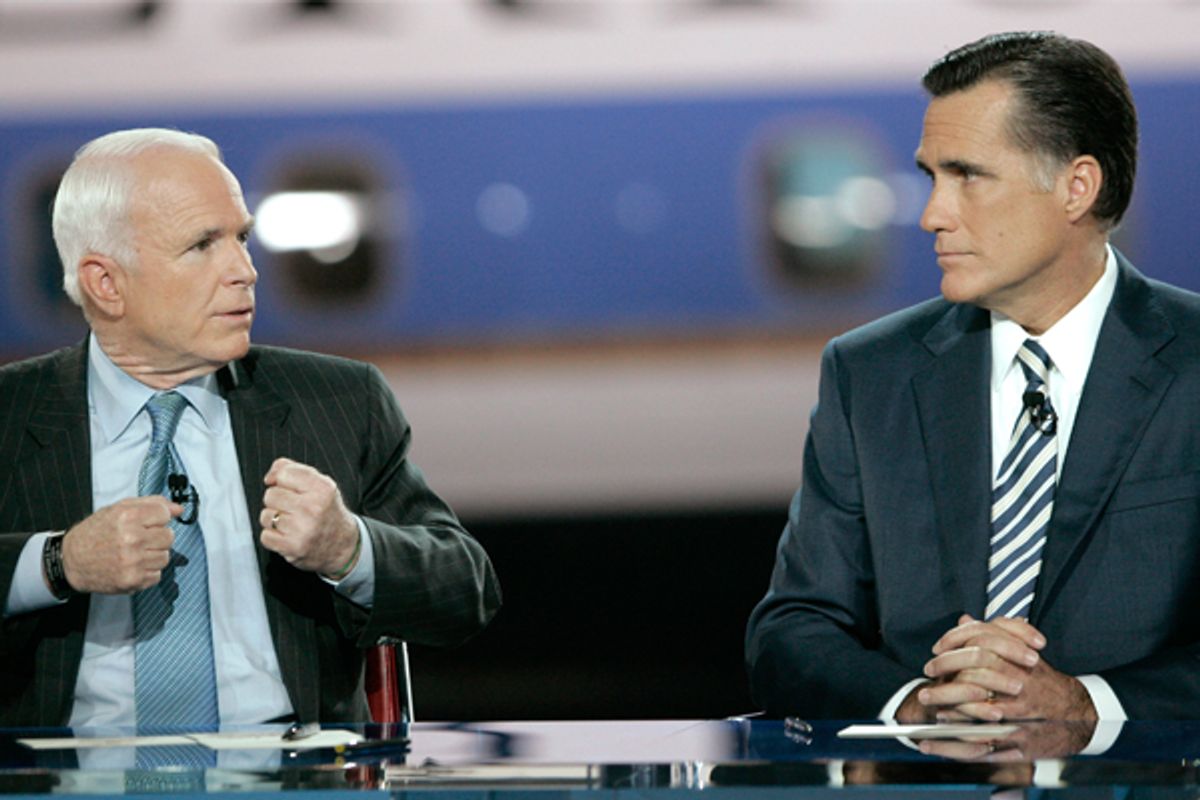 In a recent post titled "So Weird to Remember," TPM's Josh Marshall recycled some video from the February 2008 Conservative Political Action Conference, where Mitt Romney -- fresh off a string of Super Tuesday defeats to John McCain -- officially ended his bid for the GOP nomination. Marshall's headline stems from the outpouring of affection Romney received from the assembled conservative activists and from the gushing introduction that Laura Ingraham provided him.

"He is a national security conservative," she declared. "He is a proud social conservative. And he is a fiscal conservative. In other words, Mitt Romney is the conservative’s conservative." The crowd loved it. Mitt was their candidate -- the "pure" alternative to the man they desperately wanted to keep from winning the nomination, John McCain.

Today, of course, it's Romney who's playing the McCain role in the GOP race, the "moderate" candidate that conservative leaders, activists and voters simply don't trust -- so much that he's at different times this year been outpolled by Donald Trump, Herman Cain, Rick Perry and Newt Gingrich. What's funny about Mitt's evolution from conservative savior to McCain 2.0 is that he really didn't do anything between the last campaign and this one to encourage it.

Sure, conservatives frequently look back to the outspoken cultural liberalism that defined the Massachusetts phase of his political career and ask if his dramatic shift to the right on abortion, gay rights and other issues might have been just a little too conveniently timed. But these doubts are old news; all of the damning Massachusetts Mitt clips were exhumed, analyzed and debated by the right back in 2007 and 2008. Surely, Ingraham and everyone else in that CPAC ballroom was well aware that, for instance, Romney had once promised to be more supportive of gay rights than Ted Kennedy. They seemed to have worked through whatever doubts they had by the end of the '08 campaign and were fully on board. Ditto for Rush Limbaugh, who all but endorsed Romney on his radio show just before Super Tuesday that year:

I think now, based on the way the campaign has shaken out, that there probably is a candidate on our side who does embody all three legs of the conservative stool, and that’s Romney.

Romney immediately began running for 2012 as soon as he ended his '08 campaign. Actually, his red meat-laden CPAC speech, in which he claimed that he'd be aiding "a surrender to terror" by campaigning against McCain (and thus doing Democrats a favor) any longer, essentially functioned as a declaration of candidacy for the next open GOP nomination. Presumably, he and his team believed that the worst of his troubles with the right were behind him; the Massachusetts memories would only become more distant over the next four years, making it easier for the remaining conservative holdouts to come aboard.

So what went wrong?

The right's distrust can't really be tied to much that Romney has said and done since '08. On paper, he's still the same true believer conservative now that he was then. To the extent he's changed, it's by adopting a more restrained public style. Since his odds of winning the nomination are better this time, Romney has been more mindful of avoiding the sort of over-the-top pandering to the right that might come back to haunt him in the fall. But this is nothing new; most front-runners behave this way.

Healthcare seems like a more logical culprit. Romney's record on the issue -- implementing an individual insurance mandate in Massachusetts -- hasn't changed, but the right's perception of it has. Four years ago, the individual mandate was a policy idea with deep conservative roots, once that many Republicans had rallied around in the mid-1990s as an alternative to Bill Clinton's national healthcare plan. There have always been some on the right who genuinely see mandates as freedom-killing abominations, but Romney was on fairly safe ground within the GOP in 2008.

But when Barack Obama pushed a Massachusetts-style program through Congress in 2009 and 2010, the right's attitude changed dramatically. Now mandates were socialism, and Romney was guilty of a crime against conservatism. This may have been the reason that some conservative opinion leaders who might otherwise have warmed up to Romney by now instead turned on him. The problem with this explanation, though, is that there's data showing that a large number of Republican primary voters -- as in nearly 80 percent -- don't have much of an opinion about Romney's healthcare law and whether it's similar to Obama's. So healthcare alone doesn't really explain why Romney has become the new John McCain.

The real answer probably has more to do with the evolution of the GOP since '08, something I wrote about earlier today. The basic idea: Conservative leaders and activists launched a two-front war when Obama was elected, one against the new president (something the right typically does when a Democrat wins the White House) and the other against the Republican Party itself, which the right concluded had sold out conservative principles and enabled Obama's rise. The result was a conservative movement that places an unusual premium on outsider status. There's never been a more dangerous time for a Republican to be associated with the Beltway world or the party "establishment." So Romney's problem may just be that he seems just a little too conventional and a little too familiar -- the well-packaged and obviously ambitious next-in-line guy -- for a party base that doesn't like the idea of playing it safe.

This doesn't mean he can't win the nomination. Just look at McCain. But it does explain how so many of the conservatives who viewed him with admiration four years ago could now have such serious doubts about him, even though he's done little to incite a backlash.