The media and Iran: familiar mindlessness 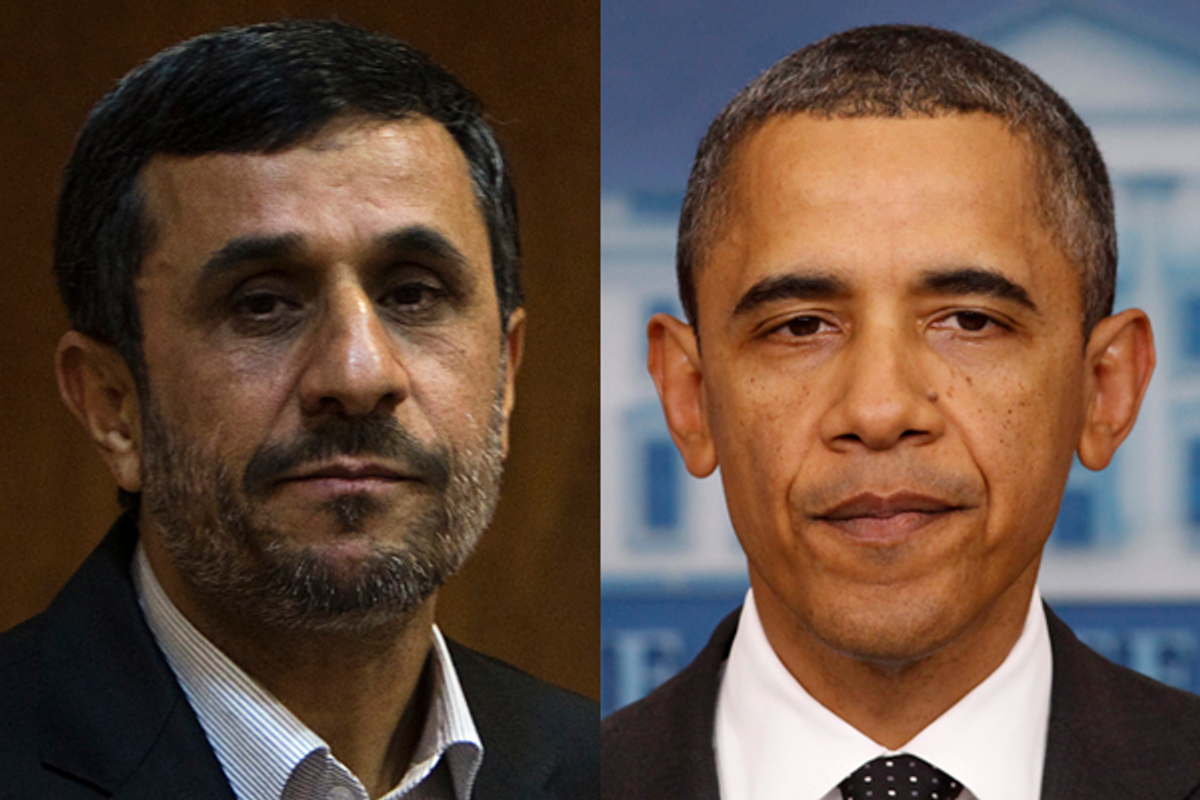 The lesson supposedly learned by the U.S. establishment media from the Iraq debacle was the danger of relying on anonymous government sources to disseminate unverified fear-mongering accusations. Rather obviously, no such lesson has been learned, as this continues to be the primary reporting method for accusing the Supreme Hitlers of the Moment -- Iran -- of anything and everything the U.S. Government can dream up. The latest entry, and one of the most egregious yet, is this Washington Post screed appearing under this headline and hovering scary picture:

Here's the crux of the story, by R. Jeffrey Smith, Joby Warrick and Colum Lynch:

The Obama administration is investigating whether Iran supplied the Libyan government of Moammar Gaddafi with hundreds of special artillery shells for chemical weapons that Libya kept secret for decades, U.S. officials said. . . .The discovery of the shells has prompted a probe, led by U.S. intelligence, into how the Libyans obtained them; several sources said early suspicion had fallen on Iran. “We are pretty sure we know” the shells were custom-designed and produced in Iran for Libya, said a senior U.S. official, one of several who spoke on the condition of anonymity because of the sensitivity of the accusation.

So it isn't merely that the prior Hitler of the Moment -- Moammar Gadaffi -- had Weapons of Mass Destruction, but far more alarming: Iran likely manufactured and gave Gadaffi those WMDs! Is there no Evil behind which these Persian Monsters are not lurking? Here are all of the sources the Post reporters cite for this claim:

The Post's own Ombudsman has repeatedly bashed the paper for its excessive, ill-explained, reckless use of anonymous sources (which violates even the Post's own non-public anonymity rules), and has insisted that the paper's "credibility" -- to the extent such a thing can be said to exist -- is being steadily eroded by this practice. Here, the Post screeches a sensationalized, highly consequential story (it even proudly notes these disclosures "may exacerbate international tensions over the country’s alleged pursuit of weapons of mass destruction") based exclusively on anonymous U.S. official sources, and barely pretends to explain why anonymity is justified (that the accusations are "sensitive" is an added reason to ensure accountability, not protect the government accusers with anonymity).

The most journalistically baseless reason to provide anonymity is to allow U.S. officials to disseminate official government claims with no accountability -- that's called serving as a propaganda vehicle -- and that is exactly what the Post does here. Of course, Iraq-like reporting has long been used to hype every Iranian Threat, but traditionally, it's been David Sanger or Michael Gordon at The New York Times through whom these anonymous government decrees about the Growing Persian Menace have been laundered as intrepid reporting. So congratulations to the Post for scooping the NYT in being gratefully used this way by the U.S. Government. In Washington media circles, being chosen by U.S. officials as the mindless stenographic vessel for the dissemination of anonymous official statements is an honor higher than the Pulitzer. As Seymour Hersh detailed yesterday in an interview on Democracy Now, exactly the same precincts that took the lead in disseminating false claims about Saddam are being used to do so with Iran, and that certainly includes the pro-Iraq-War, supremely neoconservative Washington Post.

I genuinely don't know what the Obama administration's ultimate aim with this Iran-bashing is. Although I obviously could be wrong, I doubt that President Obama desires a military attack. Just on economic grounds -- the likely disruption to the oil market -- it seems contrary to his political interests; it's even possible that all this Iran-is-Hitler propaganda is designed to discourage an Israeli attack by showing the Israelis that aggressive action is being taken to undermine the regime. On the other hand, some combination of the U.S. and Israel is clearly responsible for serious covert acts of war against Iran -- from murdering their nuclear scientists to bombarding them with cyber warfare to supporting domestic Terrorist attacks -- and it's not always possible, once one goes down that dangerous road of aggression, to control the outcome. And I do think the Obama administration craves regime change and is working hard to bring that about.

But what I do know is that there is a concerted campaign underway in Washington to demonize the Iranians and to blame them for almost every world evil, real and imagined (and please spare me the claim that the Egyptian-military-backing, Bahrain-regime-supporting, Saudi-monarchy-loving Obama administration is concerned about Iranían domestic oppression). The laughable, melodramatic accusation that the Quds Forces dispatched a failed used car salesman in Texas to hire Mexican drug cartels to assassinate the Saudi Ambassador on U.S. soil left absolutely no doubt about that. Just yesterday, Secretary of State Clinton and Treasury Secretary Geithner unveiled a slew of new sanctions against that country, with the always-threatening Clinton warning: "We continue actively to consider a range of increasingly aggressive measures . . . until Iran’s leaders live up to their international obligations, they will face increasing consequences."

What is just as clear is that America's vaunted Watchdog Media is no impediment to this continuous chest-beating, fear-mongering and demonization effort. Quite the opposite: just as they did in the run-up to the attack on Iraq, they are (with some rare exceptions) eagerly assuming their actual role as subservient, uncritical amplifiers of government messaging, and will dutifully serve that function wherever this road leads.

UPDATE: Media criticism issues aside, I hope we can all agree that arming a tryannical regime this way is the hallmark of great evil.