We need to reclaim the First Amendment 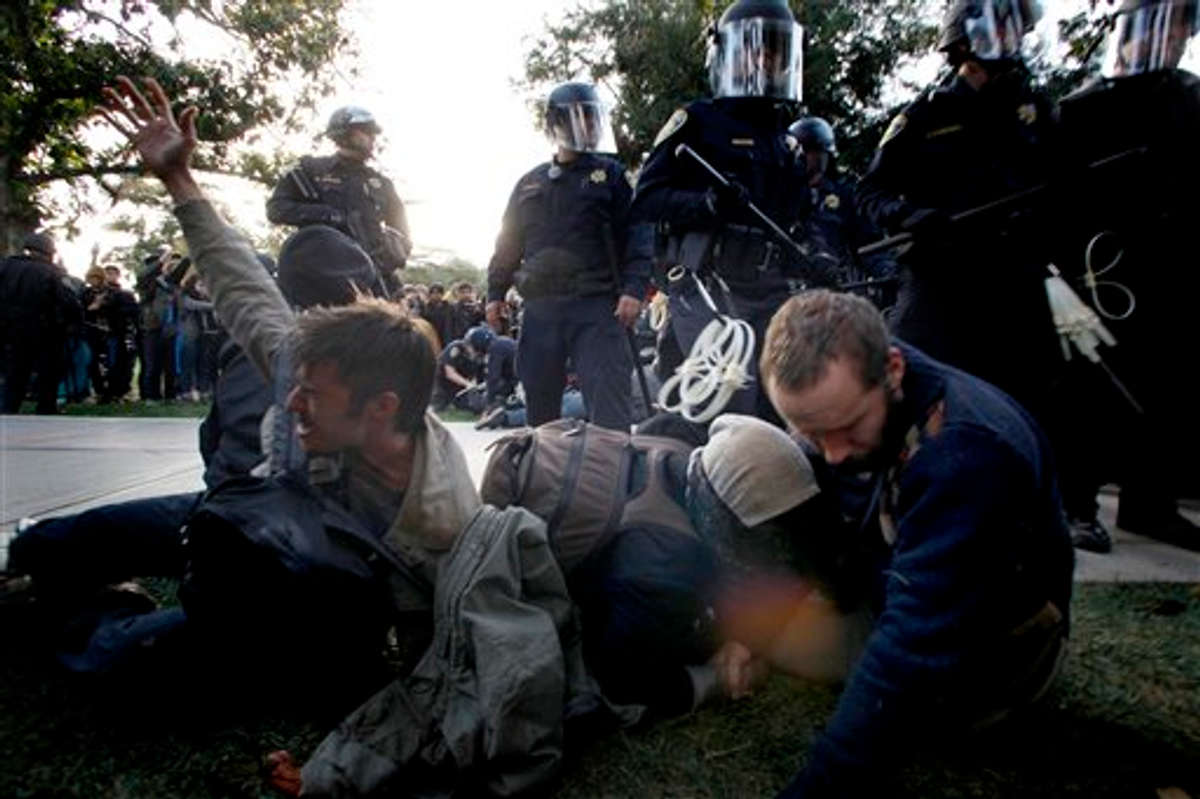 You’ve been seeing this across the country … Americans assaulted, clubbed, dragged, pepper-sprayed … Why? For exercising their right to free speech and assembly — protesting the increasing concentration of income, wealth, and political power at the top.

And what’s Washington’s response? Nothing. In fact, Congress’s so-called “supercommittee” just disbanded because Republicans refuse to raise a penny of taxes on the rich.

Meanwhile, the Supreme Court says money is speech and corporations are people. The Supreme Court’s Citizens United decision last year ended all limits on political spending. Millions of dollars are being funneled to politicians without a trace.

And a revolving door has developed between official Washington and Wall Street – with bank executives becoming public officials who make rules that benefit the banks before heading back to the Street to make money off the rules they created.

Other top officials, including an increasing proportion of former members of congress, are cashing in by joining lobbying power houses and pressuring their former colleagues to do whatever their clients want.

Millionaires and billionaires on Wall Street and in executive suites aren’t contributing all this money out of sheer love of country. Their political spending is analogous to their other investments. Mostly they want low tax rates and friendly regulations.

Why else do you suppose tax rates on the super rich are now lower than they’ve been in three decades, and why – even though the long-term budget deficit is horrendous – those rates aren’t rising? Why else do the 400 richest Americans (whose wealth is larger than the combined wealth of the bottom 150 million Americans) now pay an average tax rate of only 17 percent?

Why do you think Wall Street got bailed without a single string attached – not even being required to help homeowners to whom they sold mortgages, who are now so far under water they’re drowning? And why does the financial reform legislation have loopholes big enough for bankers to drive their Ferrari’s through?

And why else are oil companies, big agribusinesses, military contractors, and the pharmaceutical industry reaping billions of dollars of government subsidies and special tax breaks?

Experts say the 2012 presidential race is likely to be the priciest ever, costing an estimated $6 billion. “It is far worse than it has ever been,” says Republican Senator John McCain.

If there’s a single core message to the Occupier movement it’s that the increasing concentration of income and wealth at the top endangers our democracy. With money comes political power.

Yet when real people without money assemble to express their dissatisfaction with all this, they’re told the First Amendment doesn’t apply. Instead, they’re treated as public nuisances – clubbed, pepper-sprayed, thrown out of public parks and evicted from public spaces.

Across America, public officials are saying Occupiers have to go. Even in universities – where free speech is supposed to be sacrosanct – peaceful assembly is being met with clubs and pepper spray.

The First Amendment is being stood on its head. Money speaks, and an unlimited amount of it can now be spent bribing and cajoling politicians. Yet peaceful assembly is viewed as a public nuisance and removed by force.

This is especially worrisome now that so many Americans are in economic trouble. The jobs recession grinds on, seemingly without end. Homes are being foreclosed upon. Qualified students cannot afford college. Or they’re forced to take on huge debt loads they can’t repay in a jobless economy. Schools are firing teachers. Vital social services are being axed.

How are Americans to be heard about what should be done about any of this if they are not allowed to mobilize and organize?  When the freedom of speech goes to the highest bidder, moneyed interests have a disproportionate say.

Now more than ever, the First Amendment needs to be put right side up. Nothing less than the future of our democracy is at stake.