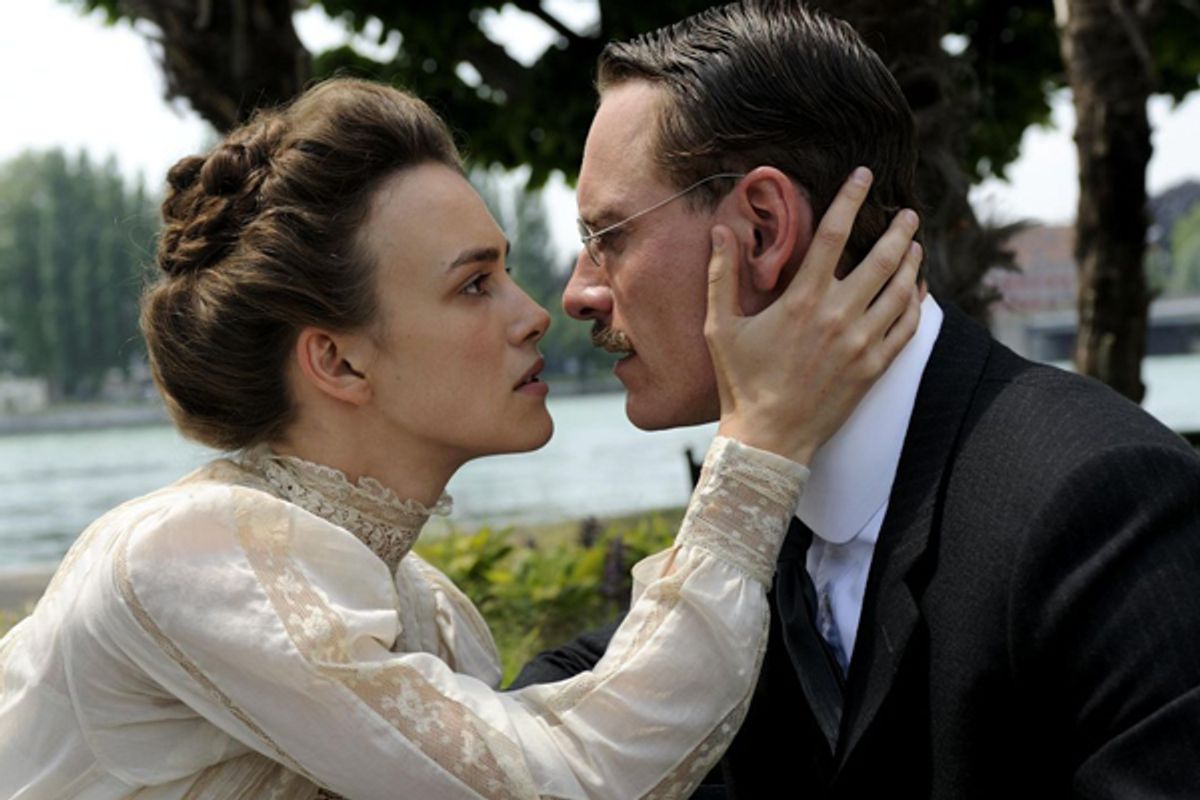 Keira Knightley and Michael Fassbender in "A Dangerous Method"
--

As long as he keeps on working, David Cronenberg will no doubt be dogged by fans of his early work grumbling that he doesn't make David Cronenberg films anymore. He's got plenty to say about his gradual career shift from visionary horror auteur to literary-minded craftsman of psychological drama (I'll get my recent interview with Cronenberg up next week), but here's a tidbit for you longtime fans: He dates the turning point all the way back to 1983. That's when he directed "The Dead Zone," with a script by Jeffrey Boam based on a Stephen King novel, and figured out that it could be satisfying to make movies whose stories hadn't originated in his own head. All but one of his films since then (the exception being "eXistenZ" in 1999) have been written by someone else, and beginning with "M. Butterfly" in 1993 he has moved away from horror and science fiction, perhaps permanently.

None of which is to say that "A Dangerous Method," Cronenberg's new film about the early years of psychiatry in 20th-century Europe, doesn't deal with perversity and sexualized horror. Or that it doesn't have a monster, or maybe two of them. When we first see Keira Knightley as Sabina Spielrein (a historical figure, like everyone else in this movie), she is shrieking and writhing like a woman possessed by the devil, and being dragged bodily from a carriage into a palatial building on the shores of Lake Zurich. This is where she will meet an ambitious, and strikingly handsome, Swiss doctor named Carl Jung (Michael Fassbender), who has become fascinated by the possibilities of a "talking cure" for mental illness, suggested in articles by a Viennese neurologist named ... well, you know his name.

At first glance, and even at second, “A Dangerous Method” (adapted by veteran screenwriter Christopher Hampton from his play "The Talking Cure") is a restrained and elegant costume drama driven by characters, language and ideas, not violence or outré imagery. But given that it's a drama about people confronting the willfulness of sexual desire, and the sadomasochistic tendencies that seem hard-wired into the human species, it dovetails perfectly with themes Cronenberg has been addressing all along. Even his early films, I would argue, are not really about people who grow extra appendages or merge with television sets or give birth to monster-babies. They're more about the ways every love story is also a horror story, and the fact that we all have the potential to turn into monsters.

Sabina Spielrein certainly thought of herself as a monster when she first came to Jung's clinic. A brilliant young woman who herself aspired to a medical career, she suffered from sexual obsessions and masochistic fantasies that she could only assume were grossly abnormal. Of course female sexual desire existed before the 20th century, but it was rarely spoken about. According to Jung's case notes, Spielrein had never even been told about the birds and the bees, let alone discussed her erotic urges -- which today would seem like no big deal -- with anyone. She became first Jung's patient, then his student and peer and collaborator, and finally his lover -- and then the question of which of them was the real monster reached its all too predictable conclusion.

Fassbender and Knightley are both superb as the parties to a literally and figuratively tormented love affair that would have a profound if peculiar effect on cultural and intellectual history. It’s no surprise that Fassbender, the brilliant and highly physical young Irish actor who starred in “Jane Eyre” and “X-Men: First Class” (and appears, often in the altogether, in Steve McQueen's upcoming "Shame") convincingly inhabits Jung’s blend of intellectual ambition, spiritual and metaphysical curiosity and Swiss-German rectitude. But Knightley, who’s always had plenty of detractors amid the chattering classes, is in many ways the real star of this film. When we first see Sabina, she is almost literally aflame with both superior intelligence and repressed sexual desire, not qualities that fit well with standards of femininity circa 1904. Later on, when she first kisses Jung on a park bench, he is taken aback. It’s men who make the first move, he tells her in fine Protestant style. “Don’t you think there is a little man in every woman, and a little woman in every man?” she murmurs.

Since you ask, there are indeed a few brief and undeniably intense scenes of S/M sexuality between Jung and Spielrein. But they come nowhere near NC-17 territory, and Cronenberg and Hampton stay true to the ethos of a period when even married couples rarely disrobed in each other's presence. What's more, Jung's discomfort with Spielrein's obsessions is evident; he's powerfully attracted to her on various levels, but is never quite sure if he digs whipping her or not. It's all rather too much for a Lutheran pastor's son, not to mention one whose livelihood and scientific future largely depend on the goodwill of his wealthy aristocratic wife, Emma (Sarah Gadon). Jung's ethical transgressions when it comes to Sabina Spielrein are almost too numerous to mention, but I'm inclined to agree with Cronenberg that both the affair and Jung's waffle-y attempts to end it are far more forgivable than the way he simply tried to erase her from his personal and scientific history.

Hampton's script follows the Tom Stoppard method of boiling down a significant but poorly understood historical episode into well-made drama. Frankly, I didn’t mind at all that Carl and Sabina’s doomed love story becomes the architecture for a lot of literary and academic talk, but it definitely won’t be everyone’s cup of tea. The other thwarted romance in the movie, you might say, is the one between Jung and his even more famous mentor, that guy in Vienna with the beard. Viggo Mortensen plays Sigmund Freud in supremely understated style — almost too understated — as an unadventurous Jewish bourgeois husband, in sharp contrast to the dashing, Teutonic Jung. When Jung takes Freud boating on Lake Zurich, the father of psychoanalysis sits awkwardly in the bottom of the yacht clutching his cane and homburg, clearly uncomfortable so far from pavement.

In part, Freud valued this younger colleague precisely because of those differences; psychoanalysis was often derided in Vienna as a decadent pseudo-science dominated by Jews, and Freud believed he needed to pass on the burgeoning empire to a Gentile. What you may already know about the story is that Jung sometimes had affairs with his patients — Sabina Spielrein was the first, but not the last — and Freud didn’t, and also that the two men later fell out over a variety of issues, most notably the scientific limits of psychiatric inquiry. Both men have their armies of detractors and defenders to this day, but Hampton is less interested in taking sides than in depicting them as deeply flawed people whose personality quirks would have an outsize influence on Western culture and history many decades into the future.

Freud’s cautious, conservative nature and his single-minded focus on sexual repression as the source of neurosis led to the creation of psychiatry as a legitimate medical and scientific field — one that was often resistant to change and dominated by authoritarian father figures. If anything, Mortensen’s Freud comes off in this movie as both a small-minded bigot and a pompous ass, who refuses to recount a dream to Jung for fear of losing his authority over such matters, and who tells Spielrein that her real mistake lay in sleeping with a non-Jew. On the other hand, Freud credited Spielrein with helping him understand that the sexual impulse and the death wish -- Eros and Thanatos -- were profoundly connected in human psychology, whereas Jung never mentioned her in his writing at all.

Jung’s passionate hunger for knowledge and cross-cultural curiosity, on the other hand, would open up vast new fields of study, some of them utterly bogus. He was clearly the progenitor of alternative and New Age psychology, which has so often blended intriguing insights with outright quackery and half-baked religiosity. As for the affair itself, which Knightley's Sabina steamily depicts as a Wagnerian fantasy, a creative fusion of opposites — doctor and patient, man and woman, dark and light, Jew and Aryan — Hampton and Cronenberg want to complicate that picture too.

Jung was well aware that he was violating the most basic professional standards -- even in that chauvinistic era, screwing one's patients was disapproved of -- and he was ashamed of it. But at least in this telling he was in love with Sabina, and perhaps the greater shame is that he never admitted it. The discoveries they had made together, both in the office and the bedroom, were undeniably intoxicating. From the beginning of the affair, Jung was trapped by ethical and moral considerations as well as pragmatic ones, since he was never likely to leave his affluent wife for a penniless Russian Jewish refugee.

As for Sabina, I think Cronenberg and Hampton are nominating her as a proto-feminist heroine, who had to lose the man she loved in order to advance the sexual and professional freedom of all women. Everyone who enjoys a nice little spanking from time to time, it seems, has her to thank for it. In real life, Spielrein's story led from one tragedy to another. She returned to Russia and became one of the nascent Soviet Union’s leading psychiatrists, before the practice was sharply curtailed under Stalin. Finally she was rounded up and shot by the Nazis after their invasion of Russia. Not because she was a brilliant shrink or a sexual pioneer, of course. Hitler and Goebbels had presumably never heard of her (although they would certainly have been appalled). Just because she was a Jew in the wrong place.

“A Dangerous Method” is a handsome and stimulating film, noteworthy more for its terrific acting and provocative ideas than for any kind of dark Cronenbergundian genius. Partly that comes from the elegant European locations and period costumes, photographed gracefully by Cronenberg’s longtime cinematographer, Peter Suschitzky, and partly that’s the literary-academic-historical nature of the project. Still, this movie has an erotic, psychoactive undertow it wouldn’t have with a by-the-numbers Hollywood dramatist like Clint Eastwood at the controls. See it first for the awkward, powerful coupling of Fassbender and Knightley; see it a second time and let its tentacles wrap themselves around your brain.