Robocops vs. the occupiers 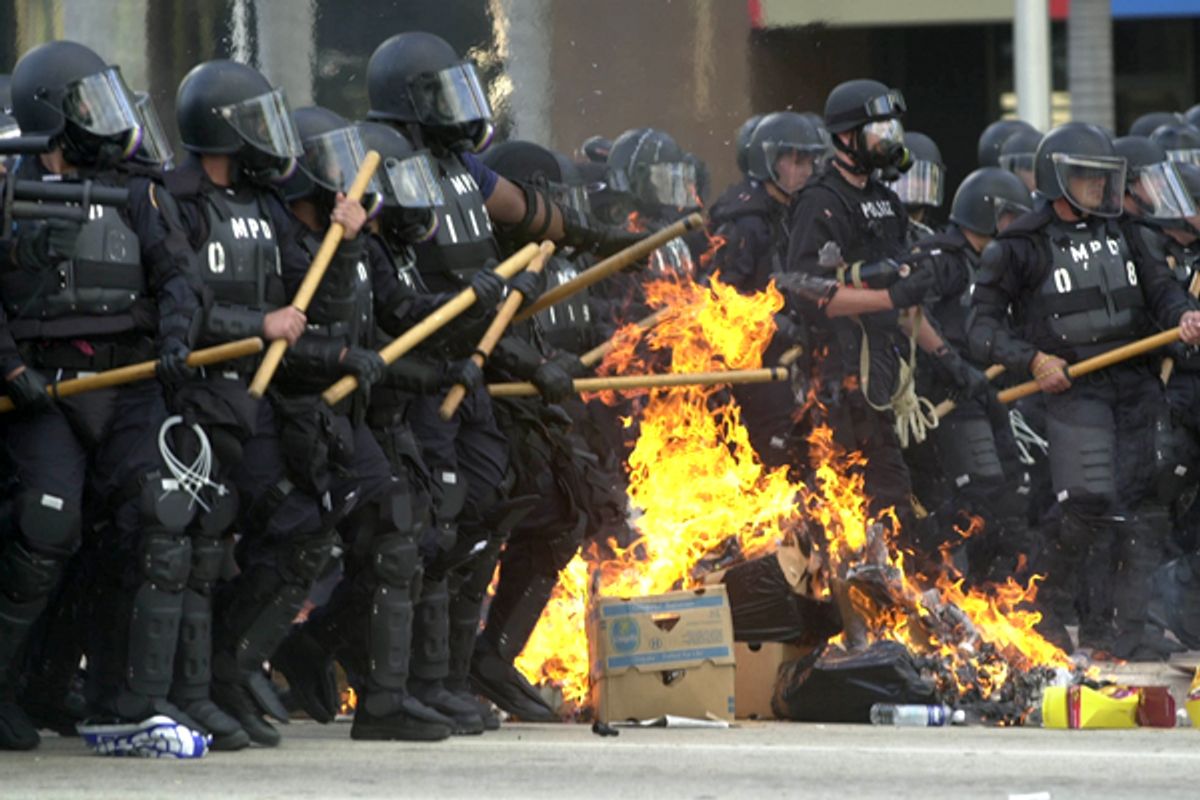 Since the Occupy Wall Street movement began in mid-September, protesters and reporters have been learning the hard way how diverse police departments handle large-scale street demonstrations -- sometimes with rubber bullets, sometimes, as in Davis, Calif., with pepper spray in the face.

While police departments have deployed tear gas in cities including Denver, Seattle and on more than three separate occasions in Oakland, Calif., in response to Occupy street demonstrations, protesters in New York have been met with the sheer force of numbers, pepper spray, kettling nets to hold in crowds, and batons. Dozens have been hospitalized by a variety of crowd control tactics.

The tactics vary from city to city, but the most aggressive policing originates in methods developed by law enforcement agencies in Miami in response to large protests against the proposed Free Trade Area of the Americas (FTAA) agreement in November 2003. Miami's approach, in the words of Miami-Dade State Attorney Kathy Fernandez Rundle, created,  “a model ... for the rest of the world to emulate in the future when these sort of events take place.”

In Miami more than 10,000 demonstrators converged on the downtown area, where a conference of trade ministers from 34 countries met to discuss the FTAA, which many South American nations opposed. Police in riot gear used rubber bullets, projectiles and batons to aggressively clear the streets of protesters. An estimated $8.5 million was spent on security for the FTAA conference and police forces from around the state were pulled in.  The ministers didn't reach any agreement and at least 140 protesters were arrested. Many more were forcibly blocked from assembling.

“Downtown Miami is built on a grid structure, so in terms of city planning it's almost a gift to law enforcement. They kettled protesters, unembedded press, everyone together into giant squares and would push into them and beat people severely with batons. During all this there were helicopters overhead nonstop,” explains Maryam Monalisa Gharavi, who helped produce an Indymedia film about the FTAA protests and their suppression, titled “The Miami Model."

“Miami is where the creeping militarization of police tactics vis-à-vis political protest was congealed," she said in an email. "Not only in numbers but in equipment the Miami police outnumbered us and widely employed militarized strategies to overwhelm people."

The model was partly a response to the events of Seattle '99, according to Alex Vitale, associate professor of criminology and sociology at Brooklyn College. Protesters at the World Trade Organization Ministerial Conference overwhelmed local police, who responded with an abundance of force and tear gas.

The fear of another Seattle was compounded by an alarm about dissent after Sept. 11, according to Vitale. “After 9/11 police forces invested in hardware, body armor and special weapon," he explains. "In the minds of some people in law enforcement, there was an equating of dissent and terrorism."

Many local police departments facing Occupy protests have also not seen dissent like this in their streets in recent decades, and don't know any other approach, Vitale says.

“In places like Dallas and Denver, police are pulling out batons because they don’t know how to deal constructively with dissent," he adds.

Vitale says that the use of rubber-coated bullets and tear gas often signals “handling dissent on the cheap.” Instead of bringing in enough officers to establish control, “a handful of guys are sent in with armor, rubber bullets and flashbang grenades."

“It’s very clear that cities across the country have not learned from our mistakes,” said Norm Stamper, the former police chief of Seattle who resigned after the debacle of 1999 and has since publicly expressed regret for his handling of the situation, especially the use of tear gas.  Stamper is now a critic of the Miami model.

“The message doesn’t seem to go through: Militarized tactics exacerbate situations,” said Stamper, who added he was particularly disturbed by recent footage from the Occupy Oakland protests, which he said resembled "a war zone.”

Gharavi’s mention of “unembedded press”  illustrates one aspect of the Miami Model that is not being used against the occupation movement. At least five independent journalists were arrested covering the 2003 FTAA protests but there were also reporters on the other side of police lines – embedded with Miami Police Department, as war reporters often are with the military.

Unlike their independent counterparts, embedded journalists from the Miami Herald, CNN, Fox News, MSNBC, Reuters and the Associated Press were provided by the police with helmets and gas masks. They were criticized by activist groups and other journalists for focusing coverage on police equipment and organization, while missing some controversial police actions on the streets, according to the American Journalism Review.

Mainstream reporters seem to have learned the lesson and stopped embedding. They now face arrest and police aggression in numerous U.S. cities. Twenty-six journalists -- myself included -- have been arrested in the United States in recent weeks reporting on the protests.

“It's pretty obvious that many police don't recognize their local journalists or their press passes,” said Bernie Lunzer, president of the Newspaper Guild, Communications Workers of America. Like the protesters,  journalists covering occupation actions face the challenge of predicting and responding to police tactics.

Looking back to Miami 2003 is  good place to start.  As Vitale puts it, “The Robocop style of policing we saw there is now the default way.”