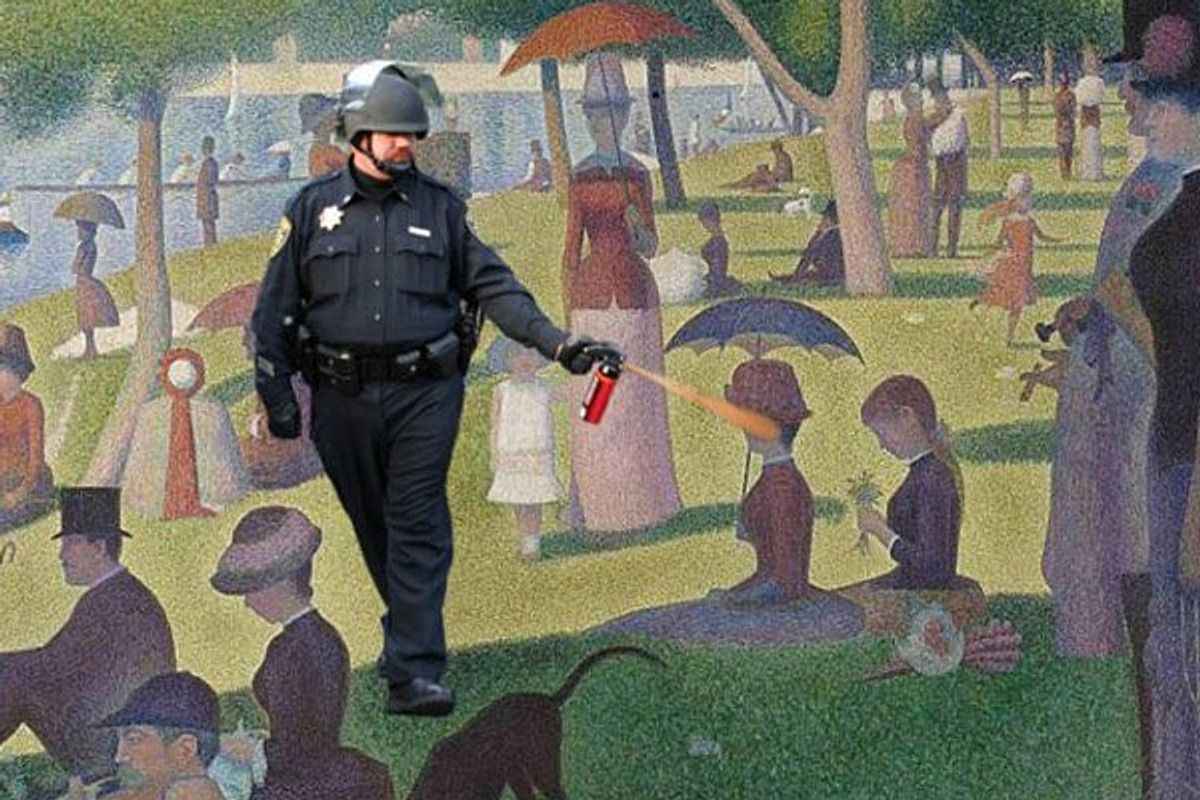 If you want to vanquish the enemy, render him absurd. Most recent case in point? The viral stardom of University of California, Davis, police Lt. John Pike. A week ago, you didn't know his name. Now, he's Pepper Spray Cop. And Pepper Spray Cop is considerably more entertaining than Lt. John Pike.

Lt. John Pike, as the world was made painfully aware last Friday, is the officer who pepper sprayed a phalanx of peacefully linked protesters who refused to move from the university's quad. The gung-ho Pike, it should be noted, was swiftly joined by several of his similarly pepper-spray-happy cohorts. But it was the image of him and his confident, casual, almost bored delivery of a torrent of orange that ignited outrage -- and then, inevitably, parody.

By Monday, Pike was rocking more memes than a Weezer video. Behold @PepperSprayCop, the man who says things like "just sprayed a can of Right Guard in my dog's snout" and "PSSSSSHHHTTTT!" on Twitter. There's also advice columnist Lt. John Pike, currently dispensing wisdom like it was mace on his own blog. The only downside to our latter-day Dear Abby? His repertoire of methods for dealing with a mailman who delivers after 5 p.m., for subduing feral cats, or for deciding what kind of car to buy all tend to run toward the singular theme of "Try pepper spraying him until his eyes bleed."

But easily the most Facebook wall-ready appropriation of Pike's moment of infamy has been his sudden, often hilariously Photoshopped appearance "cracking down on so many famous moments in history." The cleverest have already been neatly gathered on the Pepper Spraying Cop Tumblr, which depicts Pike unleashing his orange rain in the midst of Picasso's "Guernica" and "Washington Crossing the Delaware," upon a noble George Bailey, and, of course, the deeply troubled star of Munch's "The Scream." Sample caption, accompanying an image of Pike going to town on Rosa Parks: "Sitting is a perfectly peaceful form of activism. What are they gonna do about somebody calmly sitting down to make a pointAUUUAHAHAGHAGHAGHGHGHGH."

Why has Pepper Spray Cop become so popular, so quickly? Maybe because like Disaster Girl, Pike is so easy to insert into any situation. Or maybe because there's something inherently so-wrong-it's-right about Cindy Lou Who getting the business end of a can of whup-ass. But there's more to it.

There is nothing at all funny about the nightmare events at U.C. Davis on Nov. 18. One of the protesters allegedly suffered nerve damage and has yet to find out whether the effects will be permanent. Another was reportedly taken to the hospital after the spray triggered an asthma attack. And beyond the physical injuries to a hoard of nonviolent individuals gathering in protest, the shock, disgust and institutional distrust many individuals around the world feel right now will linger long after the eyes of the victims have stopped burning.

But as Megan Garber pointed out Monday for the Nieman Journalism Lab, there's power in the way that instantly iconic image of Pike -- so cool, so brazen -- has become something unto itself. It's something that "demands, in trending topic terms, attention." And whereas once the old maxim used to be that comedy is tragedy plus time, who has time anymore?

Instead, what we have is the meme. And yes, it's dopey and pretty juvenile. But for as long as we've been human, we've had satire. We turn to the Onion after 9/11 to make us laugh at one of the worst human disasters in our nation's history. We cling to Colbert and Stewart, groping to make mockery of the bad news of the day. Even Harry Potter had to learn a "riddikulus" spell to chase away the boggarts. Humor gives us context. It shrinks the monsters down to size. It can't make a guy with an itchy trigger finger and an inflated sense of purpose any less real a threat, but it diminishes his power to scare us. And when we're not afraid, that's when we find the courage to stand up again.

We don't laugh at the Pikes of the world because we are not incensed at their abuses of power, or because we don't take their actions seriously. We do it because we take them very seriously, indeed. But without billy clubs and guns and tear gas, sometimes, laughter is the only weapon we've got.