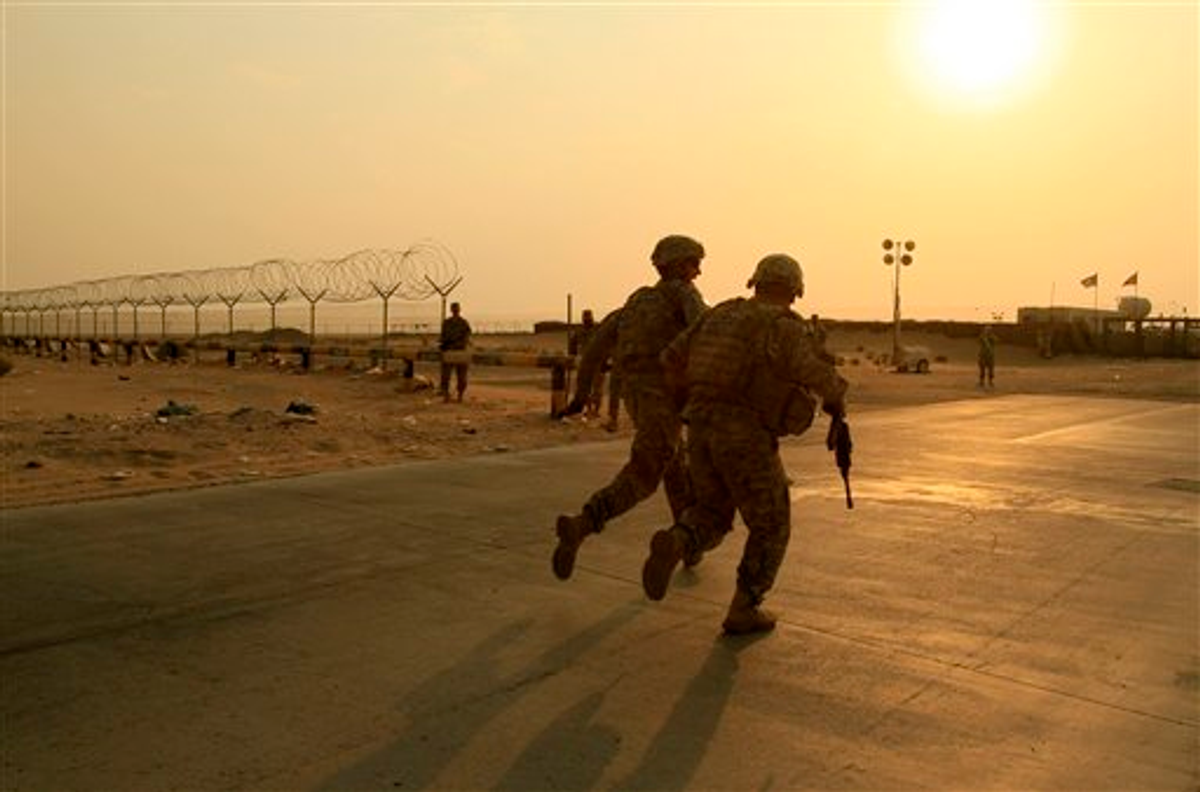 Anonymous U.S. officials this morning are announcing in The Washington Post that they have effectively defeated what they call "the organization that brought us 9/11" -- Al Qaeda -- by rendering it "operationally ineffective." Specifically, "the leadership ranks of the main al-Qaeda terrorist network have been reduced to just two figures whose demise would mean the group’s defeat, U.S. counterterrorism and intelligence officials said." And: "asked what exists of al-Qaeda’s leadership group beyond the top two positions, the official said: 'Not very much'."

You might think this means that the vastly expanded National Security and Surveillance States justified in the name of 9/11, as well as the slew of wars and other aggressive deployments which it spawned, can now be reversed and wound down. After all, the stated purpose of the 2001 Authorization to Use Military Force (AUMF) which provided legal cover to all of this was expressed in the very first line: "To authorize the use of United States Armed Forces against those responsible for the recent attacks launched against the United States." The purpose of this authorized force was equally clear and limited: "to use all necessary and appropriate force against those nations, organizations, or persons [the President] determines planned, authorized, committed, or aided the terrorist attacks that occurred on September 11, 2001, or harbored such organizations or persons."

Now, the group which the U.S. government has always said was the one that "planned, authorized, committed, or aided the terrorist attacks that occurred on September 11, 2001" is, according to this same government, "operationally ineffective." So what does that mean in terms of policy? Absolutely nothing:

U.S. officials stressed that al-Qaeda’s influence extends far beyond its operational reach, meaning that the terrorist group will remain a major security threat for years.

Not just a threat -- but a major security threat -- "for years" to come. In fact, it turns out that the version of Al Qaeda that the U.S. just spent the last decade "defeating" on the ground that it perpetrated 9/11 does not even really matter: "U.S. counterterrorism officials now assess al-Qaeda’s offshoot in Yemen as a significantly greater threat." Even in Pakistan, where the "effectively inoperable" group is based, the CIA refuses even to reduce its activities: "letting up now could allow them to regenerate," an anonymous official decreed. And if that's not enough to keep your fear levels sufficiently high to support (or at least acquiesce to) more militarism, there is always this: "The arrest this week of an alleged al-Qaeda sympathizer in New York underscored the group’s ability to inspire 'lone wolf' attacks."

That last bit about the "lone wolf" refers to the scary Terrorist Super-Villain, Jose Pimental, caught and unveiled at a dramatic Press Conference this week by New York Mayor Michael Bloomberg: a Terrorist even more hapless and inept than the failed Texan used car salesman whose chronic inability to find his keys didn't prevent him from being recruited as a dastardly Terrorist Mastermind by Iran's elite Quds Force. This latest frightening lone wolf menace, according to The New York Times, "had little money to speak of, was unable to pay his cellphone bill and scrounged for money to buy the drill bits that court papers said he required to make his pipe bombs" and, furthermore, "had trouble drilling the small holes that needed to be made in the metal tubes." Also, he "lived with his uncle in the Hamilton Heights neighborhood after his mother threw him out recently, appears to be unstable, according to several of the people briefed on the case, three of whom said he had tried to circumcise himself."

Even the FBI -- which specializes in converting hapless Muslim youth into Terrorists and then providing the planning, funding and training for the attacks, so they can jump in at the last minute and heroically disrupt the plots they themselves created -- refused to get involved in this case out of "concern that the informer might have played too active a role in helping Mr. Pimentel." In other words, even the Supreme Entrapers known as the FBI "were concerned that the case raised some entrapment questions" and "wondered whether Mr. Pimentel had the even small amount of money or technical know-how necessary to produce a pipe bomb on his own, had he not received help from the informer." Also: they're worried because many of Pimental's recorded statements were made as he smoked marijuana with the NYPD's informer as he guided Pimental to attack and instructed him how to do it.

I'm sure we can all agree that we must endure years more of civil liberties assaults, endless war, bulging military budgets, suffocating government secrecy, a sprawling surveillance regime, and the slaughter of countless more Muslim children in order to save ourselves from this existential Lone Wolf threat. And that's to say nothing of the fact that endless war, drone attacks, occupying countries, and engineering regime change is precisely what causes and fuels these threats in the first place. Indeed, NYPD's Police Commission Raymond Kelly claimed that "Pimentel’s talk did not 'turn to action' until recently" when he "clearly 'jacked up his speed after the elimination' of the Yemeni cleric Anwar al-Awlaki, who was killed by an American drone strike in September." In other words, what little Terrorism does exist is caused directly by our own actions -- the very actions justified in the name of stopping Terrorism.

But this is the defining mentality of Endless War. Enemies are never defeated; even when they are "operationally ineffective," they "will remain a major security threat for years." If their capacity to frighten fades, they just get seamlessly replaced by new Villains ("U.S. counterterrorism officials now assess al-Qaeda’s offshoot in Yemen as a significantly greater threat"). When that doesn't work, you just manufacture the Terrorists yourself: by converting, directing and funding them and/or doing exactly that which you know will ensure they continue to emerge. And when all else fails, you just find a brand new war that ensures the process repeats itself in an endless loop: the establishment bellwether Washington Post today expressly demanded "regime change" in Iran ("by now it should be obvious that only regime change will stop the Iranian nuclear program").

The key trick of Endless War is to permanently maintain two contradictory official premises: (1) we're on the verge of Victory!; and (2) the threat is grave and we cannot let up. Without both of those premises, the citizenry will wonder why endless war is necessary or wise. That's been the dual-track propaganda that has sustained the Drug War for four decades and counting (yes, we've been waging this war for 40 years, but we're making real progress, but the threat is still so severe that the war must continue into the foreseeable future), and it has been and continues to be the core propaganda that fuels the Terror War. Hence, (1) we have made Al Qaeda "operationally ineffective" and (2) they "will remain a major security threat for years."

The GOP foreign policy debate last night was really quite a spectacle, not because of what was said -- all the candidates other than Ron Paul and, to a lesser extent, Jon Huntsman, did what they always do: created a long list of countries the U.S. should bomb, invade, occupy, and otherwise subvert -- but because of the cast of characters CNN dragged out as "foreign policy experts" to pose the questions. It was like a carnival of war criminals, warmongers, torturers, and petty tyrants: Reagan Attorney General Ed Meese, best known for his 1980s war on pornography, was dredged up to demand that the government be vested with more Patriot Act powers (because he's a believer in individual liberty and small government); there was long-time supporter of Ahmad Chalabi and a war on Iran, Danielle Pletka; Iraq War propagandist and torture regime architect Paul Wolfowitz; and Fred Kagan of the mighty Kagan warrior family. But remember: as the supremely "objective" CBS' Bob Schieffer made clear in his snickering, scornful interview on Face the Nation this weekend, it is Ron Paul who is crazy and bizarre for suggesting that U.S. aggression played a role in motivating 9/11 and for being worried that bellicose actions against Iran are making things worse and may lead to war.

There are four articles from yesterday relating to Endless War that I highly recommend: (1) This, from The Atlantic's Conor Friedersdorf, about progressives who praise President Obama "as if his civil liberties abuses and executive power excesses never happened"; (2) this, from Eric Lewis in The New York Times, on the various ways Obama has shielded torture crimes from all accountability and the consequences of his doing so; (3) this, from The Guardian, on the latest emerging Obama foreign policy "success" to be soon celebrated by Democrats: his efforts to overturn the global ban on cluster bombs (which I wrote about a couple weeks ago here); and (4) this, from Rolling Stone's Matt Taibbi, linking Endless War and the mentality it spawns to the UC-Davis pepper-spraying incident, eloquently elaborating on a similar point I made over the weekend.