My life as a lab rat 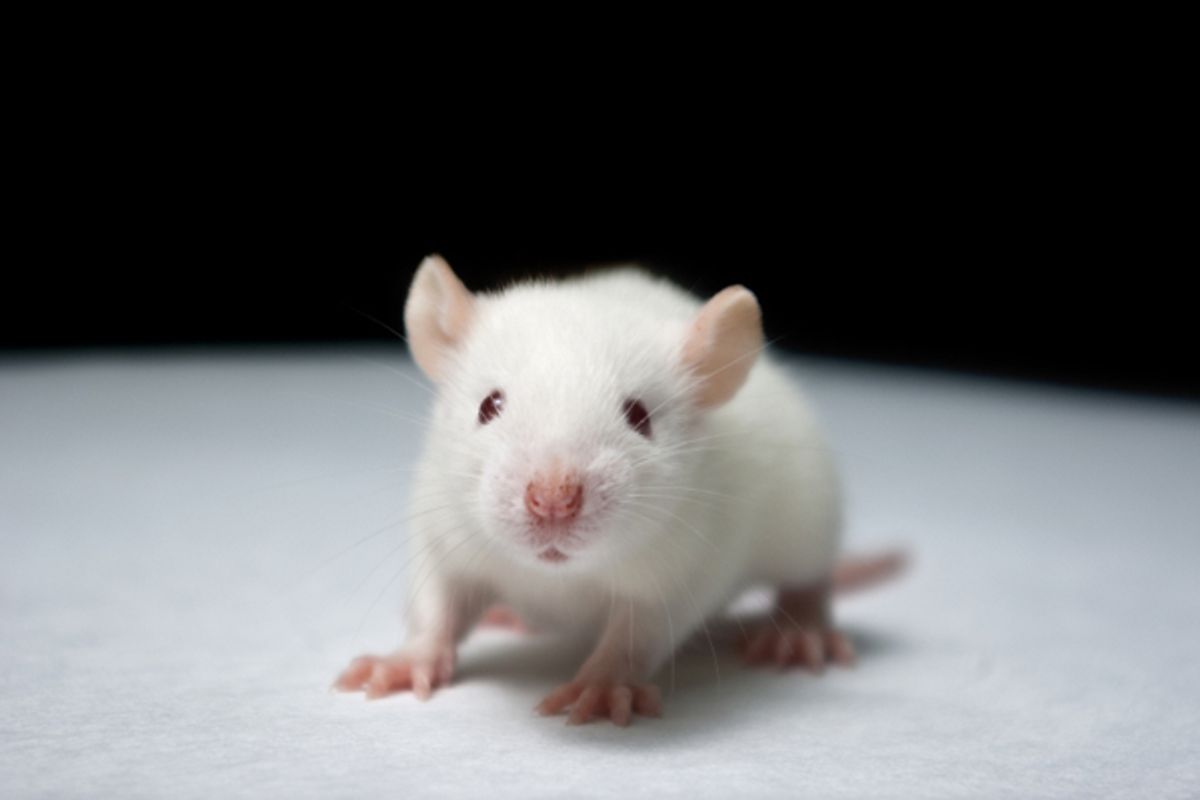 In August, one relatively healthy year after losing five centimeters of my scalp to malignant melanoma, my doctor told me there were some "troubling" new spots on my lungs – and that they were growing. A few weeks later, I awoke from the surgical biopsy, doped up and under an oxygen mask, and had my worst fears confirmed – the spots were malignant. Two weeks later, after I pointed out a peculiar bruise on my back during a routine follow-up, the diagnosis got even worse – that bruise was another malignant tumor.

In the space of days, I'd gone from someone whose friends had hastily branded a "survivor" to a woman with metastatic, Stage 4 cancer. But just as I was  blubbering through the news, my oncologist offered a life raft in a sea of panic. She explained that my immunologist, who'd recently led the clinical trials for Ipilimumab, the first new melanoma drug approved by the FDA in 30 years, was doing a new, Phase 1 clinical trial. It would combine Ipilimumab with another promising experimental drug, MDX-1106, and for a longer course of treatment. As an otherwise young, healthy person, I was a suitable candidate for the sole upcoming spot in the trial.

When Ipilimumab was approved last spring, doctors crowed of its success in extending lives by entire months, and its 30 percent success rate. "In cancer," my oncologist had said, "that's a home run." Those odds feel considerably less bright when you're the one with cancer, but the treatment nonetheless offered hope. And with that, I became one of the fewer than two dozen people with advanced melanoma in America right now lucky enough to be Bristol-Myers Squibb's little lab rodent.

But first, before beginning the trial, I had to submit to a battery of grueling tests and interviews, both to "establish a baseline" and to assure that I qualified as a subject. It was kind of like going for a high-level job, except that I wasn't sure how to ace an MRI and CT scan. For weeks, I dragged my freaked-out ass back and forth to Sloan-Kettering, meekly answering questions and suppressing fits of giggles every time someone tried to check the lymph nodes under my arms.

Though the field is still relatively new, immunotherapy has the potential to be one of the first true game-changers in cancer treatment to come along in ages. Unlike chemotherapy, it works with the body's own defenses to fight off cancer. And unlike chemo, the side effects tend to be more tolerable – and less intimidating to patients. As one of my nurses recently explained, "There are people who avoid treatment because they're afraid of chemo. They see people who've lost their hair and lost weight, people who are throwing up. They don't want to look sick." Aside from its potential effectiveness, immunotherapy is quite literally an opportunity to put a new face on the public perception of treatment -- one that doesn't say to colleagues and strangers on the street,  "As you can see from my bald, fragile countenance, I have some messed up cancer here."

Yet there are risks with every drug -- as you've probably ascertained from those horrifying ads for Abilify. And if you ever really want to feel like you're chemically tempting the fates, I recommend a Phase 1 clinical trial. On the list of subjects on whom my drug combination has been tried, I think I'm right behind that monkey from "28 Days Later."

I realized my life was about to get intense when I was handed a 27-page informed consent form alerting me of my "responsibilities." I was not to get a flu shot. I "must not" get pregnant. As a mother in her mid-40s, that one wasn't a hard sell, but I wondered how that imperative is going over for my fellow subjects. I had to agree that I understand I would run the risk of a battery of side effects from fever, rash and fatigue to "rare but serious" conditions ranging from heart attacks to meningitis.

At one early meeting, a doctor on the study had me sit on the exam table, surrounded by young residents and fellows. He prodded the tumor on my back, pointing out its size and coloration, marveling at its dimensions, seemingly unaware that there was breathing human attached to it.

"My oncologist says she can remove it," I piped up. Unlike the cancer in my lung, the tumor was at least easy to access. He looked momentarily stunned, as if he hadn't expected his research animal to pipe up with an opinion.

"No," he replied firmly. "If you remove the tumor, you can't be in the study. We need it."

I never saw that doctor again, which is fortunate because I told the rest of the team that I never wanted that man to touch me, ever. My immunologist, meanwhile, cleared me to have the back tumor removed if I still wanted. But by then, I'd begun the treatment, and amazing things had already started happening.

"It's smaller," the immunologist said a week after my first infusion. "Look how flat that is. Is this tender to the touch?" he asked. It wasn't. Two weeks after the first treatment, the doctor was already enthusing to his colleagues at a medical gathering in Washington, D.C., about the patient who'd visibly improved after just one treatment. We'll see what's brewing in my lung when I go for my next CT scan in December, but so far, I am considered quite the achiever around the fourth floor. My doctor beams at me like I'm Christmas morning.

Yet it isn't all a happy cakewalk through cancer yet. Though I'm faring well by most standards, the side effects have kicked in – and, I know, may well escalate as I continue treatment. The morning run I used to fly through can now make me cry with exhaustion. Last week, a dash up the stairs of my child's school rendered me so out of breath I couldn't speak. The diarrhea hasn't been too bad, though my doctors could ask me about it all day long. I am beginning to think they suspect the Da Vinci Code is hidden somewhere in my defecatory habits.

And then there is the ongoing fear that the treatment will stop working -- or perhaps more agonizingly -- keep working but become too dangerous to continue. Last summer, a dear friend was thriving on Avastin, until a sudden, harrowing reaction landed her in the hospital. She was pulled off treatment, and just last week the FDA withdrew approval for its use for breast cancer. The scary truth is that many of us in the cancer world -- both doctors and patients -- are winging it here, just hoping that the cure doesn't kill us along the way.

I also still can't get my head around the stunning amount of money this thing is costing. A regular course of four Ipilimumab treatments runs a whopping $120,000. I am getting double that, not including the maintenance phase treatment, in combination with the MDX-1106. Because I'm in a trial, Bristol-Myers Squibb, not my insurer, is paying for the drugs. Yet I couldn't help cringing recently when I couldn't do a treatment because my temperature suddenly spiked. As he readied me to go home, one of my doctors pointed to the fat bags of now useless drugs at my side and the two Tylenol in my hand and joked, "I'd say this was a $25,000 day."

But aside from the free lunch I get every time I go for treatment, there is no free lunch. Whether I have a treatment or not, I am expected to go to Sloan-Kettering every week for monitoring and blood work. They usually take a dozen vials, sometimes squeezing my arms to coax the fluid out of my reluctant veins. I have a six-month initial course of treatment, followed by a nearly two-year, eased-up "maintenance" course, followed by a long-term relationship of follow-up study. Assuming I don't die, I will be, as a nurse told me early on, "working with us for, I guess, forever."

It is costing a lot to keep me alive these days. But I hope I'm contributing something too. I've signed off on giving my blood and tissue and whatever the hell else anybody wants to have for genetic studies, for research into other forms of cancer, for the treatment of other deadly diseases. On my better days, I feel connected to something very big. I feel like my diseased body has a purpose. And then sometimes I feel like a combination of Henrietta Lacks, those kids from "Never Let Me Go" and Michael Palin's doomed brood in "Monty Python's the Meaning of Life."

I am an experiment. And as the experiment continues, I intend to keep sharing it with you, giving you my take on what it's like to both grapple with a potentially fatal illness, and to stand on the front lines of a treatment that just might revolutionize cancer care. Right now, I have a light, speckled rash all over my body, a condition I hope a new steroid cream will correct. My gums sometimes bleed. I have a slick, oily taste in my mouth, one that rendered the birthday cake my family made for me recently all but inedible. Yet when my daughters grandly marched it out from the kitchen, I smiled gamely and posed for pictures. Then I made a wish. Not just for me, but for all of us living here in Stage 4, and for all those yet to someday get that devastating, life-changing phone call. Let all this be worth it, I thought. Let it work. And I blew out the candles.