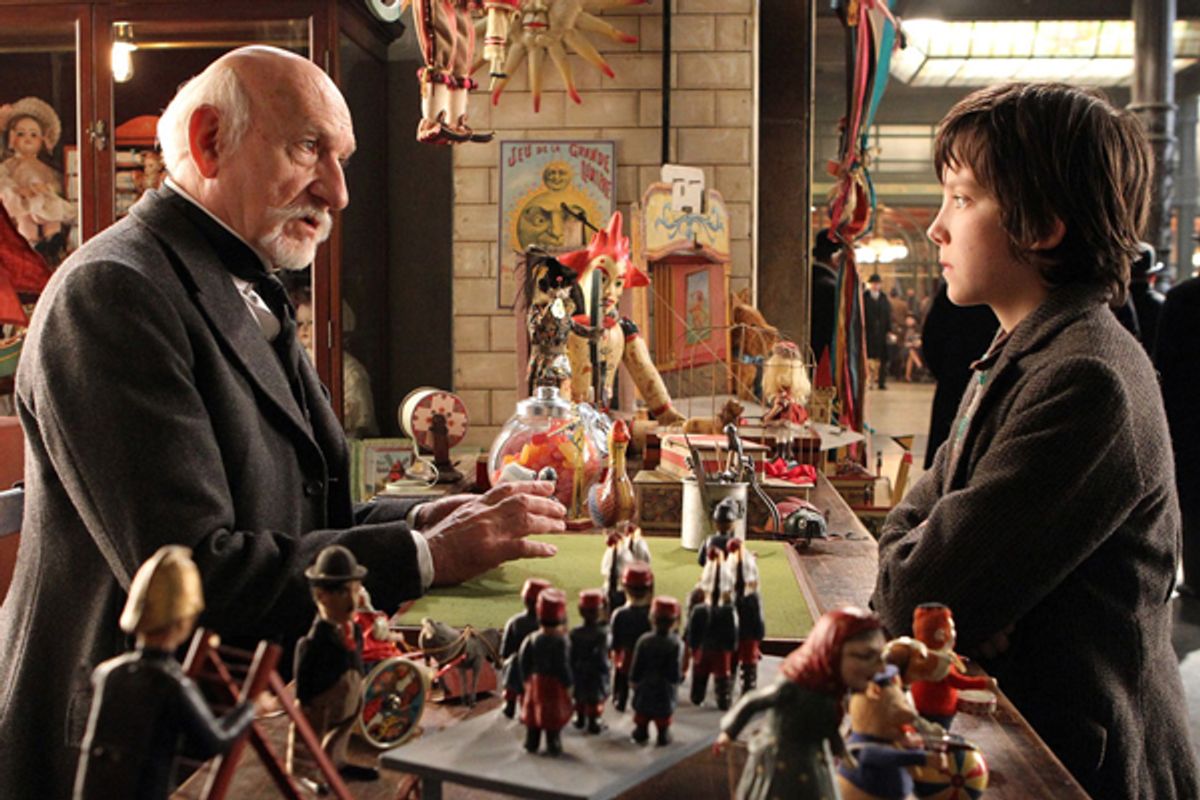 I will repeat what I said after watching an unfinished version of "Hugo" a few weeks ago: I have seen the future of 3-D moviemaking, and it belongs to Martin Scorsese, unlikely as that may sound. In this case, of course, the future may also be the past. I wouldn't be the least bit surprised if "Hugo," Scorsese's gorgeous and meticulous 1930s fantasy re-creating life in a Parisian railway station in extraordinary detail, is the best movie anyone will make in the current post-"Avatar" 3-D wave (which has already ebbed considerably).

If you were bewildered by the news that Scorsese was apparently blundering into Steven Spielberg’s territory and making a 3-D family spectacle for the holidays, wonder no longer. No doubt "Hugo" has enormous potential when it comes to the box office and the upcoming awards season. It's a heartwarming, old-fashioned yarn about an orphan who finds love by giving love, who finds a purpose in life by restoring purpose to a wounded and bitter old man. It's often a breathtaking visual spectacle, full of delightful flights of imagination, large and small: a view of Paris from a railroad clock tower, drawings that come alive, an adorable little clockwork mouse. It offers a rich and varied cast of adult actors -- from Ben Kingsley to Sacha Baron Cohen to Emily Mortimer -- supporting youthful leads Asa Butterfield and Chloë Grace Moretz, as a pair of intrepid orphan adventurers.

But "Hugo" is also clearly a personal film, a film about making films that addresses Scorsese's obsession with the history of cinema and echoes psychological themes found throughout his work. It is without question a work by a major film artist and craftsman, made partly in tribute to another one. "Hugo" was adapted from Brian Selznick's Caldecott Medal children's book, "The Invention of Hugo Cabret," by screenwriter John Logan, but if you set out to design a story for Martin Scorsese you could hardly do better: a lonely boy of the Depression, obsessed with technology and the movies; a forgotten filmmaker and his lost masterpiece; snippets of early films by the Lumière brothers, Buster Keaton, Charlie Chaplin, Harold Lloyd and Georges Méliès, all of them organic to the narrative.

Scorsese and his usual team of technical and design collaborators -- let's mention cinematographer Robert Richardson and production designer Dante Ferretti, for starters -- create a gorgeous storybook vision of Paris, circa 1930, and moves us through it with fluid cinematic ease. Scorsese isn't using 3-D as a stunt or a value-added effect but as a storytelling tool, a method of infusing his tale with humor, humanity and often breathtaking depth. From the opening tracking shot, which plunges from the Parisian sky along the railroad platforms and finally to the station clock, behind which 12-year-old Hugo (played by Butterfield, a British teenager previously in the TV series "Merlin") is hidden, the vision at work in this film is unmistakable. And while that shot is largely a digital creation, most of the film was shot with live actors in physical space, on a full-scale set built at Shepperton Studios outside London. That adds a level of realism to the fairytale that's absolutely crucial. No one but Scorsese, perhaps, would pay attention to the floating motes of dust in a 3-D movie -- and then there's the fact that they're real motes of dust.

If you already know Selznick’s book -- best described as a fusion of novel, graphic novel and picture book -- you’ll understand exactly why its central plot twist appealed to Scorsese so much. (This may be a heretical thing to say, but I think Logan's screenplay is more elegant than the book and improves on some of its awkward and unsatisfactory structural elements.) Bedraggled Hugo has lived alone in the train station for some months, since the death of his father (Jude Law, seen in a flashback) and the disappearance of his drunken uncle (Ray Winstone). He keeps the clocks wound and lives by stealing food and evading the mock-villainous Station Inspector (Baron Cohen, whose enormous head serves as the movie's funniest 3-D effect). Hugo's only companion is literally a mechanical man, a magician's automaton his father was trying to repair before he died. Apparently the automaton can write (such machines indeed existed) and Hugo is determined to continue the repair work and receive the mechanical man's secret message.

But Hugo's attempts to steal tools and clockwork pieces get him in trouble with Georges (Kingsley), the grumpy old toy-seller who runs a booth in the station. Only the intervention of Georges' precocious goddaughter, Isabelle (Moretz), can rescue a precious notebook the old man has confiscated from Hugo. Together these two orphans begin to explore the mechanical man's secret, which of course turns out to link the present and the past and connect Hugo's late father to Isabelle's Papa Georges, who is dead in spirit but not in fact. (I'm about to issue a minor spoiler, but one that's highly relevant and has been widely discussed.) You see, Papa Georges is in fact the aforementioned Georges Méliès, a magician who became a pioneer of imaginative cinema and directed perhaps the first science-fiction film, the 1902 "A Trip to the Moon." Although Méliès made hundreds of movies and was one of the first directors to become famous to the general public, it's true that he was virtually forgotten by the 1920s and had sold off his films to be recycled into shoes. (Despite the best efforts of Scorsese and other restoration mavens, only a small proportion of Méliès' immense output survives today.)

Is the 21st-century public even remotely interested in the mythology surrounding a remote and strange figure like Méliès? Probably not, but I don't think the success or failure of "Hugo" hinges on that. This movie creates a world that is both magical and realistic and invites us to live in it, and it tells a story of a community of damaged people in this fantastical version of interwar Europe who all find some redemption. Georges Méliès was frankly not one-tenth the filmmaker that Martin Scorsese is. As storytelling, his movies are primitive and silly, but he was a visionary showman who understood this newly invented medium as a delivery system for special effects and spectacle -- and in so doing, paved the way toward Hollywood. Still, if Scorsese wants to celebrate the fact that one part of his lineage, so to speak, goes back to the innovations of Méliès, he's of course correct.

Given Scorsese’s superlative command of the technical aspects of cinema, and his career-long commitment to movies as full-on sensual spectacles (although always, or almost always, built around human characters and stories), it shouldn’t really surprise us that he saw potential in 3-D that other filmmakers failed to grasp. Up until now, almost the only post-”Avatar” film made in 3-D that displayed any verve or imagination whatsoever was the summer 2010 animated hit “Despicable Me,” which at least was good fun. (I enjoyed “Cars 2” more than most critics, but you really didn’t miss much of the production design — and you saved several bucks — if you watched it in 2-D projection.) Too much of the time, we’re dealing with postproduction 3-D conversion, which either looks like absolute crap (“The Last Airbender”) or added nothing but a mild headache to the viewing experience (the two-part “Harry Potter” conclusion).

Scorsese's use of 3-D in "Hugo" is both physical and psychological, going inside the outsized clockwork above the train station where Hugo makes his home and also inside the machinery of dreams, the prehistory of the craft and art to which this great American director has devoted his life. It's way too early to know how posterity or film history will view "Hugo," but no doubt to some viewers it will look like an inexplicable tangent in Scorsese's long and prolific career. Then again, plenty of people might describe "The Last Temptation of Christ" or "The Age of Innocence" or "Kundun" that way, in that they don't have guns or gangsters in them and don't resemble his most iconic work, and I'd argue those are three of his best movies. Let's leave it this way: Instead of sticking with the familiar, Scorsese has followed his impulses into something that feels entirely new but is still distinctively his. He has made a potential holiday classic, an exciting, comic and sentimental melodrama that will satisfy children and adults alike and reward repeat viewings for many years to come.