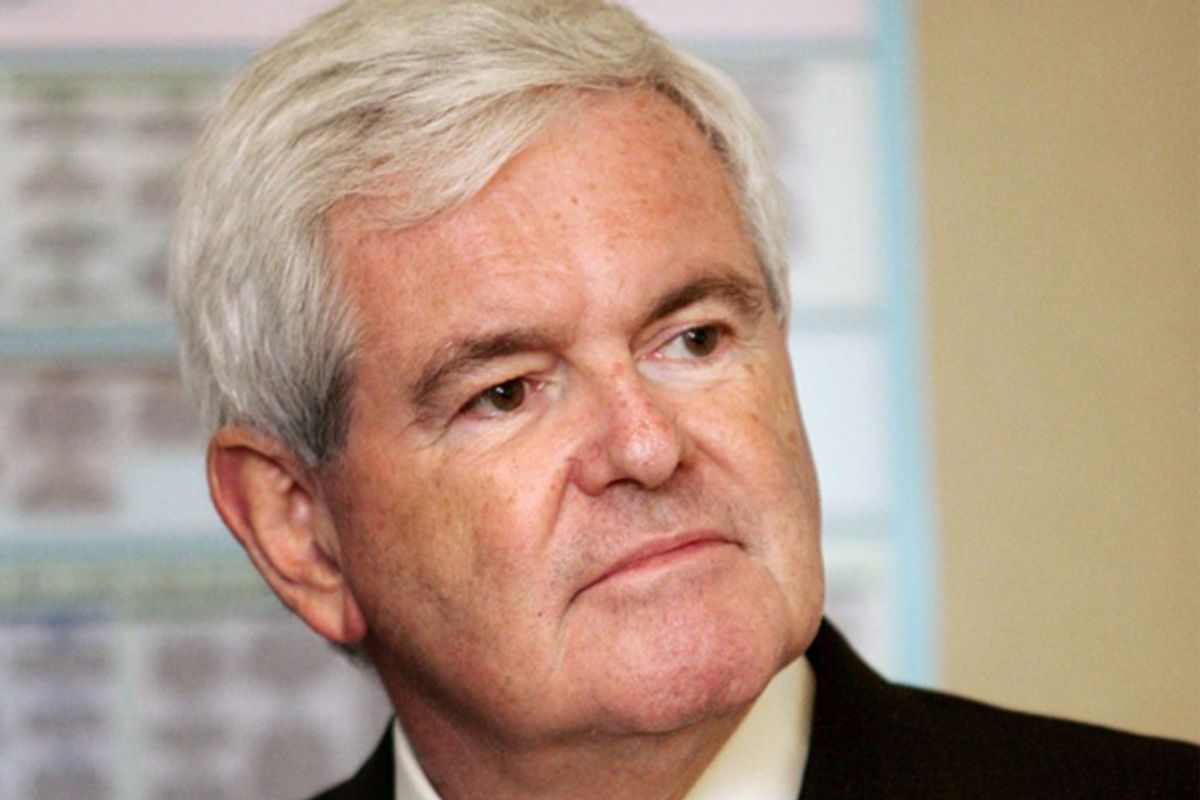 Everyone agrees: Newt Gingrich may be polling strong now, but the man has a lot of "baggage." As our own Joan Walsh put it, even his baggage has baggage. And it's not just us loony leftists who think the former speaker is baggage-beset. Conservative professor John J. Pitney wrote of Newt Gingrich's baggage yesterday at the National Review's The Corner. But there seem to be two very different definitions of what's Newt's baggage.

Here's what Joan Walsh described as his baggage: Newt Gingrich served his first wife with divorce papers while she was recovering from cancer surgery, he left the woman he left his first wife for for another mistress (he then converted to Catholicism in order to ask the church to annul his second marriage), he petulantly shut down the government in 1995 in part because he was upset that President Clinton sat him in the back of Air Force One, he gleefully led the Clinton impeachment drive while cheating on his (second) wife, and he had, for some reason, a $500,000 line of credit at fancy jeweler Tiffany and Co. And he blamed Susan Smith's horrific murder of her children, and the Columbine and Virginia Tech massacres, on Democrats. And he says racist stuff.

Also most of his staff quit last summer because he is shilling books and documentaries and not actually for real running for president. Because Newt is a swindler.

That all seems like "baggage," as traditionally defined by normal people.

But when conservative professor John J. Pitney Jr. weighs in on "Newt's baggage" at The Corner, he seems to be defining it differently. Pitney's "baggage" is a quote in which Gingrich admits to, at one point, having been "a Rockefeller Republican," which is apparently disqualifying. Newt says he supported Rockefeller, in the 1960s, "because he was the most pro-integrationist Republican candidate.” Oh, well! Now he'll never win the nomination, because the GOP hates people who were on the right side of history in the 1960s.

Daniel Foster mentioned Gingrich's baggage earlier this week, too. For him, this baggage includes at one point supporting an individual healthcare mandate. Like Mitt Romney. And the Heritage Foundation. And the Republican Party as a whole, from 1994 through 2008.

Thomas Sowell, too, writes of Newt Gingrich's "baggage," today. And for Sowell, that baggage is Gingrich's endorsement of basic human compassion in dealing with the families of undocumented immigrants.

And let's not forget that Newt Gingrich also used to care to some degree about doing something to avoid catastrophic climate change! That got him booed at CPAC. (George Will, decrying Gingrich's mutability, also attacked him for sitting down with Nancy Pelosi, in support of restricting carbon emissions.)

I think we have enough material here for a comparative list.

Newt Gingrich's baggage, according to the left:

Newt Gingrich's baggage, according to the right: