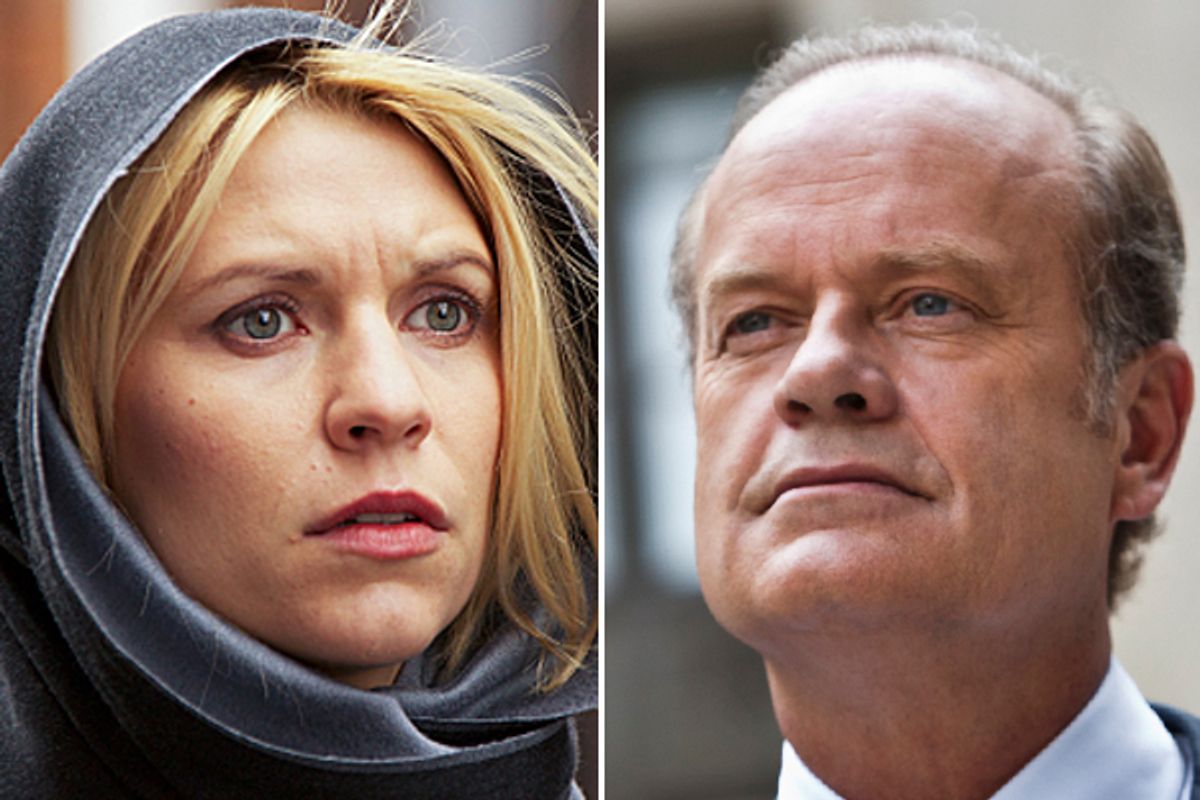 Claire Danes in "Homeland" and Kelsey Grammer in "Boss" (Showtime/Starz)
--

As regular readers know, I sometimes fall head-over-heels in love with promising new shows, and when they deliver a problematic or outright bad episode, it's disillusioning. I tell myself it's the nature of the beast -- that it's hard to make just one great half-hour or hour-long episode, let alone 10 or 12 or 26 in a row. The law of averages has to catch up eventually. But that doesn't change the fact that a show that once seemed to have excellent judgment suddenly made what felt like out-of-character or flat-out stupid choices. A botch-job episode can make you wonder if you were right to like the show in the first place. At its most misjudged and tone-deaf, a bad episode of an otherwise terrific series can emphasize flaws you were previously inclined to overlook. It can even make you second-guess the things you praised in the past.

I'll give you two recent examples, then pose a few questions and open the floor for readers to share their own experiences. I'll place the examples within self-contained sections, so that you can easily skip them if you're afraid of spoilers.

The Starz drama "Boss" was one of the biggest surprises of the new season -- a swaggering, slightly purplish Song of the City, featuring Kelsey Grammer in a career-reinventing performance as Chicago mayor Tom Kane. I praised it the way Chicagoans are supposed to vote: early and often. I still think Grammer is terrific, and I like most of the other recurring players, too -- especially Connie Nielsen as Kane's wife Meredith, and Martin Donovan as his ice-water-veined chief adviser, Ezra Stone. I was all set to write another piece praising it -- specifically a celebration of the fifth episode, "Remembered' (Nov. 18), which deepened and expanded the show's scope. Directed by "Homicide: Life on the Street" cinematographer Jean de Segonzac and written by Angelina Burnett, it was a nearly perfect hour of TV, one that aced the macro as well was micro details of the show's milieu. As I watched Kane and his people try to manage a PR nightmare -- the contamination of a nearby town by toxic waste that Kane himself had buried when he was a sanitation commissioner back in the late 1980s -- I felt certain I was in the hands of people who knew what they hell they were talking about. The dynamics of PR and public perception were brilliantly explored -- especially the way that a master propagandist can redirect a scandal's energy in ways that benefit the person who caused it. (I laughed out loud when the small-town mayor finally called a joint press conference with Kane, the man responsible for his town's awful predicament, and profusely thanked him for his help during the crisis.)

The episode also connected "Boss" to a long tradition of civic tragedies about morality and ethics, invoking both "An Enemy of the People" and "Oedipus Rex." Certain moments even seemed to suggest Kane's degenerative neurological disorder and his mentor's apparent dementia were somehow connected to that toxic waste site -- that the sins of the past were perhaps coming back to haunt the present. (I always chuckle remembering a friend's glib summary of the plot of "Oedipus Rex": "Who is responsible for this accursed plague on Thebes? Oops, hold on a second-- well, whaddaya know, it's me!"

What stopped me from writing a column about this magnificent chapter? It was the next one, "Green," actually, which just happened to be on the same screener disc as "Remembered." Written by Lyn Green and Richard Levine and directed by Mario van Peebles, it was a hot mess of an episode, one that highlighted persistent flaws that have dragged on "Boss" even during its finest hours: specifically, a weirdly brutish and dehumanizing attitude toward women and sex, and a penchant for show-offy sadism and graphic violence that all but screams, "We're on pay cable! We can do anything!" Certain scenes just felt like the R-rated cable version of running out the clock -- particularly the sequence in which Kane's daughter Emma (Hannah Ware) and her drug dealer boyfriend witnessed a savage beating in an alley, then went back to her apartment and had sex against a wall. Then in the final sequence, a troublesome alderman who was making life difficult for Kane got tortured, murdered and buried out at the O'Hare Aiport toxic waste site by the same underling he'd ludicrously mutilated in the premiere. (Right -- as if this could happen and not instantly topple Kane and his administration.) The big twist with Meredith deciding to work against her husband was also stupid; I just didn't believe that a municipal first lady who'd survived so much personal and political adversity - and seemingly made peace with all kinds of moral compromise -- would suddenly decide to foul her own nest like that. A TV show can choose to be a vicious but realistic and fundamentally serious portrait of contemporary urban politics, a la "The Wire," or a David E. Kelley-style naughty cartoon soap opera. It just can't be both. In the immortal words of Henrik Ibsen, cognitive dissonance is a bitch.

Overseen by "24" producers Howard Gordon and Alex Gansa, with heavy input from former "Homicide: Life on the Street" and "Rubicon" writer Henry Bromell, "Homeland" instantly struck me as one of the season's best new dramas. The show's first few episodes built beautifully from a somewhat plausible setup: longtime Iraq POW Nick Brody (Damian Lewis) tries to readjust to life back in the states while being secretly surveilled by CIA agent Carrie Mathison (Claire Danes), a pill-popping psych case who thinks Brody's a domestic terrorist who got turned in captivity. Although the series played Carrie and Brody's cat-and-mouse dynamics subtly and realistically during its early stretch, keeping them mostly apart, the show slowly began to hint that they were headed for a more, um, personal relationship. They made that official in the Nov. 6 and 13 episodes, which saw Carrie and Brody impulsively have sex in the back of a car, then trip off into the woods for a weekend that felt like "Last Tango With the Manchurian Candidate." This all should have played as ridiculous TV contrivance, and in lesser hands it would have. But because the series had paved the way for it so meticulously -- detailing the depth of Brody's alienation from his wife, friends and country, as well as Carrie's emotional instability and penchant for maverick movie hero-style "improvisations" -- we bought it. Better yet, the cabin-in-the-woods subplot paved the way for what felt like a series-redefining revelation: in an informal interrogation on a sunlit porch, Brody told Carrie he was neither a terrorist nor a war hero, just a man who spent eight years in captivity and did whatever he had to do to survive, including converting to Islam and learning to love his jailer, the terrorist Abu Nazir. The episode was capped by another huge revelation: that Tom Walker (Chris Chalk), the Marine sniper whom Brody thought he'd been forced to murder in captivity, was alive, and being positioned to take a shot at the president's helicopter.

This all seemed to set the stage for "Homeland" to become a different show than the one we'd originally been promised -- a series in which a wrongly-accused former Marine joins forces with a CIA agent to capture a real menace. The next episode, however, pulled a sort of double-reverse fake-out, ending with a scene that implied that Brody really was a terrorist agent all along. It was a revelation too far, or so I thought. I wrote a piece about this episode wondering if it signaled a de-evolution into plot twists for their own sake, a tendency that made AMC's once-promising "The Killing" grow more ludicrous and stupid by the week. I had other concerns as well -- they're detailed in this piece -- but suffice to say they all came back to my suspicion that this series might prove more expedient than intelligent, more opportunistic than realistic, and that it was about to sacrifice all of its good qualities on the altar of "surprise." Last Sunday's episode seemed to set things back on track; I especially liked the explanation of why Tom Walker instinctively sought refuge in the mosque, Carrie's expert detective work ending with that secret conversation in the clothing store, and the flashbacks to Brody's captivity, during which he tutored Abu Nazir's son, a darling boy who was ultimately killed along with dozens of other Iraqi children in a U.S. bombing run. The show's exceptional performances -- especially Lewis', which grows deeper and more sympathetic by the week -- have gone a long way toward quelling my concerns, or at least making me inclined to accept what common sense tells me is horse manure.

But several things still don't sit right. One is the Brody-as-sleeper-agent thing. The more we learn about Brody personally, the less he seems like somebody who's capable of sustaining a long-term deception, part of which must occur in the public eye. He radiates an everyday sort of pained decency, and when he told Carrie that he wasn't a war hero-type -- that in fact he was not all that brave of a person -- I believed him. To pull off a long-term public-private performance like the one that Brody is supposedly engaged in, you have to be either very brazen or wired all wrong emotionally (maybe a bit of both). Brody just doesn't read like that sort of person -- not in his interactions with other characters, but more importantly in his quiet moments when he's alone and nobody but the audience is watching him. And the politicization of Brody's character -- he's been ordered to get close to the vice president, the man who ordered the airstrike that killed Nazir's son -- feels way too "Manchurian Candidate" for me, not compatible with his established personality, and probably unworkable in real-world terms. Also: political campaigns always miss things during vetting, but I am having a hard time believing that the vice president's people would seriously consider letting their man get close to a former POW who once freaked out and shot a deer with a handgun during a house party, is under investigation as a possible terrorist by the CIA, and was once best buddies with a presumed-dead sniper who's currently the subject of an FBI manhunt. (And come on, wasn't Brody's final conversation with his wife Jessica just dumb? What kind of wife would hear a story that her husband got mugged, didn't go the extra mile to tell her about it, and disappeared for most of the day -- and just accept it?)

And now back to our regularly scheduled column: The problem is, even when a show recovers from an off-key or outright bad episode, the memory of that episode stays with you, and you have to reconcile it (or excuse it, or forget it) as you continue to watch. Obviously I'll wait until the end of the season to render a final verdict, but right now I'm thinking there was less to "Boss" and "Homeland" than I originally hoped -- that what we're seeing are, respectively, a more purplish and less disciplined Chicago cousin of "The Wire," and a slowed-down, more depressed "24." If I'm proved correct in my suspicions, it doesn't mean that either show is not worth your time; there are still plenty of compensations, some of them extraordinary. I'll continue to watch both of these series, just more skeptically, with a guilty-until-proven-innocent attitude. That's how I watch most TV, because the nature of series TV almost guarantees drastic fluctuations in quality.

Are there any shows that won your heart early on, then made you re-evaluate your enthusiasm? What were the shows? What made you take a step back? And did you ever reconcile your objections and decide to keep watching? Has there ever been a TV series that in your opinion produced no bad episodes? Or does the nature of TV make such a scenario impossible?