A viral video turns a bullied teen into a star

It got better for one gay teen after Lady Gaga and millions of others tuned in. Then the name-calling started again 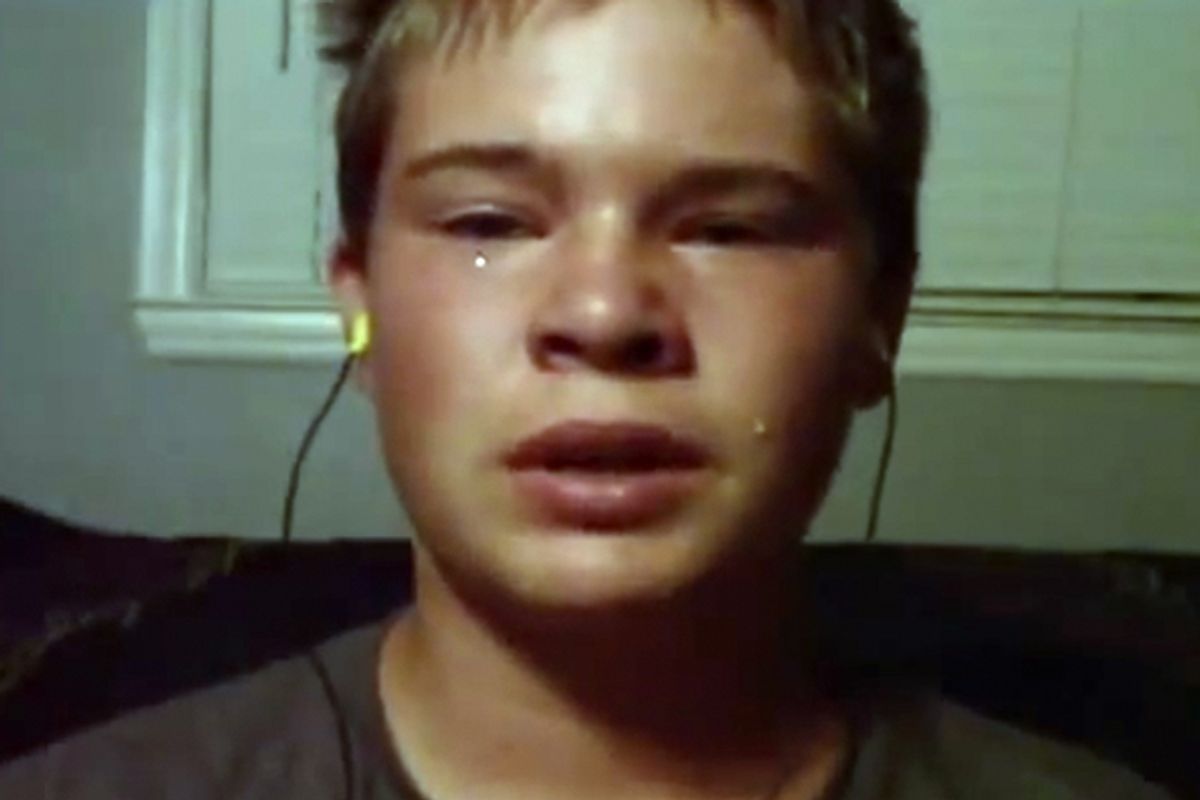 If you want to get a sense of everything that is wonderful and terrible about the Internet, look no further than the saga of Jonah Mowry. In August, shortly before the start of a new school year, he was a nervous and despairing gay 13-year-old who poured his heart out on YouTube. To the strains of Sia's "Breathe Me" and via a series of wrenching, confessional index cards, Mowry revealed the bullying he'd endured since first grade -- and his determination not to let it get him down. "I've cut … a lot. I have scars. Suicide was an option … many times." But, he added, "I'm not going anywhere, because I'm stronger than that."

The video sat largely unnoticed until last week, when, Mowry says, friends encouraged him to link to it from his Facebook page. And overnight, an instant viral sensation – and a controversy – ensued. Mowry's emotional stand has now attracted over 5 million views on YouTube, and garnered supportive tweets from Nick Jonas, Paula Abdul, Ricky Martin and Rosie O'Donnell. Lady Gaga tweeted, "Thank you Jonah for being brave enough to share your story + showing us strength. You matter to millions." Perez Hilton singled out his story, noting Mowry "has given the world a great gift with this poignant video" and noting, "Life is not fun every single day. But it is a great gift and you are special! Know that!" An outpouring of supportive comments likewise flourished on his YouTube channel. "You just taught me one thing," wrote one visitor, "that we all have a million reasons to be here." There were a devastating number of posts from people who said they'd been bullied as well. "I've been through the same kind of thoughts as well," wrote one, while another admitted, "I tried several times to commit suicide only to remember all the people I had in my life that would miss me. Life does get better. I'm 23 now and I'm out."

Yet the Internet edition of Newton's third law is that for every poignant, beautiful supportive thing that happens online, there is an equal amount of jerkwaddery. Aside from committing the unpardonable offense of being young and unapologetic about his sexual orientation, Mowry really raised hackles by posting a new video this weekend, one in which he appeared neither tearful nor lonely.

In the clip, a raucously gum-chewing Mowry sits next to a young female friend and defiantly says, "To the people who think that nobody likes me -- almost my entire school loves me. I don't want to sound stupid or conceited or anything, but the video was made almost four months ago." Then, to silence the haters who questioned whether he'd truly been cutting himself, he shows off the scars on his arm. He ends by thanking "the people who are being nice" and adding, "To the people who are being mean and calling me gay, thank you for stating the obvious."

It was a bold, direct volley at the bullies. And that was all it took for the bottom feeders to decide the pain of his initial video was "fake." They branded Mowry "such a little fag" and worse. "Enjoying your FAIL and AIDS, I see," went one all-too-typical response.

Mowry says on his YouTube channel now that that the original video was made during "a very emotionally dark time in my life," when he was "dreading going back to school and … had not come out to my family yet." In his clips, Mowry comes across as a typical recent teen – awkward, genuine, a mediocre speller. (Note to Jonah: This is a mom speaking. Lose the gum.) But his lack of polish, and his audacity in having his own "it gets better" moment, aren't reason for the irrationally scathing responses. No, they're just your typical cowardly homophobia, combined with a perverse disappointment that the weeping kid of August has become the cocky high schooler of December.

Though a series of heartbreaking suicides have brought the horrifying scourge of bullying to light of late and made it the focus of school initiatives and media campaigns, the fact remains that in school halls and on Facebook walls, we are a long way from stamping out cruelty and stupidity in our time. Last year, gay teen Jamey Rodemeyer killed himself after enduring multiple bullying incidents at school. This week, his tormenters received their punishment: They were simply suspended from school. Mowry's story -- the outrage he's provoked, but more significantly, in the poignant chords of compassion he's inspired -- proves how powerful one kid with a webcam can be. These days, you can make a difference by showing your wounds and shedding tears. But most of all, if you really want to piss off the enemy, the best thing you can do is go on living.