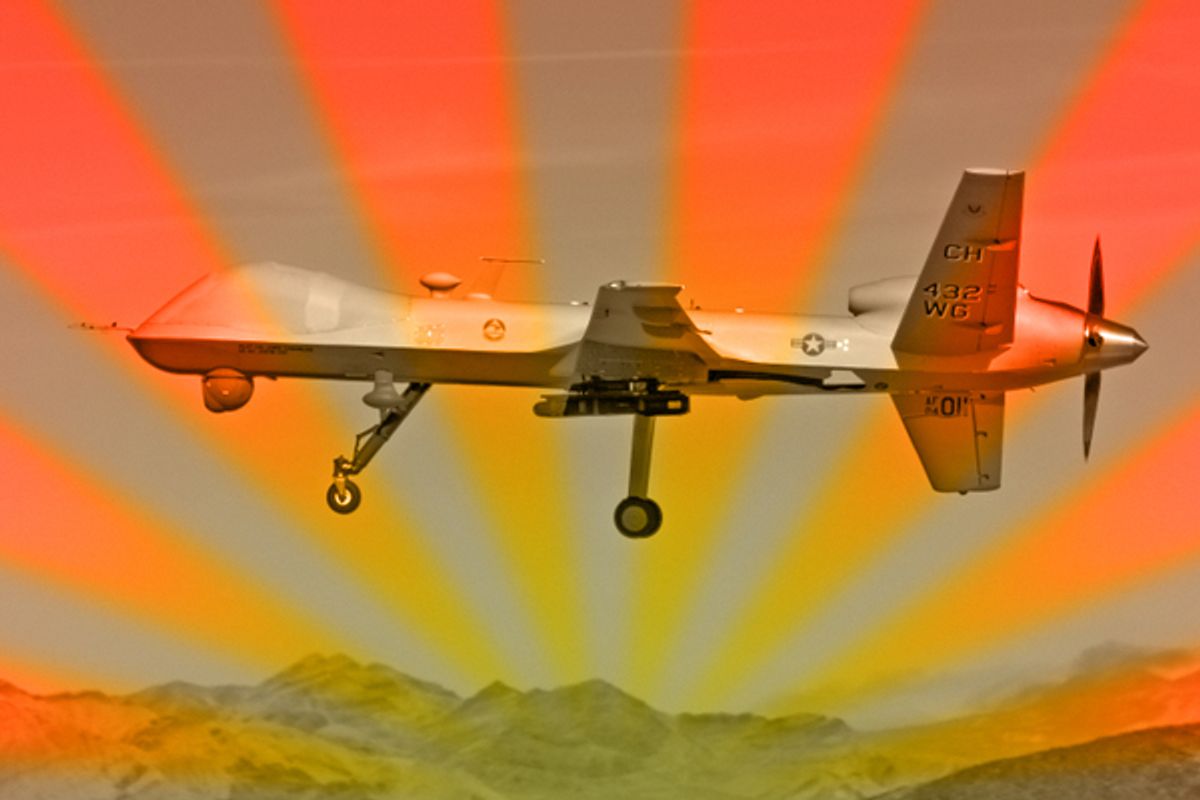 Excitement over America's use of drones in multiple Muslim countries is, predictably, causing those weapons to be imported onto U.S. soil. Federal law enforcement agencies and local police forces are buying more and more of them and putting them to increasingly diverse domestic uses, as well as patrolling the border, and even private corporations are now considering how to use them. One U.S. drone manufacturer advertises its product as ideal for "urban monitoring." Orlando's police department originally requested two drones to use for security at next year's GOP convention, only to change their minds for budgetary reasons. One new type of drone already in use by the U.S. military in Afghanistan -- the Gorgon Stare, named after the "mythical Greek creature whose unblinking eyes turned to stone those who beheld them" -- is "able to scan an area the size of a small town" and "the most sophisticated robotics use artificial intelligence that [can] seek out and record certain kinds of suspicious activity"; boasted one U.S. General: "Gorgon Stare will be looking at a whole city, so there will be no way for the adversary to know what we're looking at, and we can see everything."

As of the 2010 year-end report from the Federal Aviation Administration (FAA), there were already "more than 270 active authorizations for the use of dozens of kinds of drones" (35% held by the Pentagon, 5% by Homeland Security and others by the FBI). Employing them for domestic police actions is following the model quickly being implemented in surveillance-happy Britain, where drones are used for "the ­'routine' monitoring of antisocial motorists, ­protesters, agricultural thieves and fly-tippers, in a significant expansion of covert state surveillance."

Even leaving aside the issue of weaponization (police officials now openly talk about equipping drones with "nonlethal weapons such as Tasers or a bean-bag gun"), the use of drones for domestic surveillance raises all sorts of extremely serious privacy concerns and other issues of potential abuse. Their ability to hover in the air undetected for long periods of time along with their comparatively cheap cost enables a type of broad, sustained societal surveillance that is now impractical, while equipping them with infra-red or heat-seeking detectors and high-powered cameras can provide extremely invasive imagery. The holes eaten into the Fourth Amendment's search and seizure protections by the Drug War and the War on Terror means there are few Constitutional limits on how this technology can be used, and there are no real statutory or regulatory restrictions limiting their use. In sum, the potential for abuse is vast, the escalation in surveillance they ensure is substantial, and the effect they have on the culture of personal privacy -- having the state employ hovering, high-tech, stealth video cameras that invade homes and other private spaces -- is simply creepy.

But listeners of NPR would know about virtually none of that. On its All Things Considered program yesterday, NPR broadcast a five-minute report (audio below) from Brian Naylor that purported to be a news story on the domestic use of drones but was, in fact, much more akin to a commercial for the drone industry. Naylor began by describing a video on the website of a drone manufacturer, AeroVironment, which names its drone "the Qube"; the video, gushed Naylor, shows police officers chasing a criminal who hides, only for the police to pull a drone out of their trunk, launch it airborne, receive images of where the criminal is hiding on their iPad, and then find and arrest the suspect, who was armed and dangerous. NPR listeners then heard from that corporation's Vice President touting how much the Qube will help "public safety professionals like law enforcement, search and rescue, and first responders."

Naylor then told NPR listeners that drones "have been a success with the military" -- though he didn't mention things like this, this or this -- and then moved on to talk to an official in a Sheriff's office in Colorado who uses the Dragonfly X6; in Naylor's words, that police official explained how the drone product has "been especially useful in search operations." The Sheriff official then hailed the drone's low cost, light weight, and fantastic safety record.  Next up in NPR's report was -- seriously -- an official with the Association for Unmanned Vehicle Systems International, which Naylor called "an industry trade group." That's the organization that represents the drone manufacturing industry, and NPR decided that this, too, was an important source for its story examining the domestic use of drones. That official touted all the fantastic private-sector uses for drones, including "Utility companies - so oil and gas - using a UAS to do surveillance over a pipeline; electrical companies that want to do surveillance over some of their electrical wires; the agriculture market. So, you can use UAS for crop testing. You could use UAS for tracking livestock. "

With about 20 seconds left in the report, it came time to tack on a brief, cursory note about privacy and abuse issues. Said Naylor: "All that flying around of unmanned aircraft has some people a little wary." A "privacy advocate" was put on the air for about ten seconds to note that "drones can easily be equipped with facial recognition cameras, infrared cameras, or open WiFi sniffers" and could also be used by "paparazzi, your homeowners' association, your neighbor." Naylor then noted that the FAA is working now on safety regulations, and with that, the report ended. So NPR listeners heard for 4 1/2 minutes about the wonderful, exciting uses of drones from an executive of a drone corporation, an official with the drone industry, and a sheriff's spokesman using drones, and then for about 10 seconds at the end from someone who is "a little wary." If the drone industry had purchased commercial time on NPR, how would this report have been any different?  (An industry commercial might have given more prominent play to the privacy advocate just to make it seem less one-sided).

There is no question that domestic political unrest is a major concern of law enforcement officials at every level. A new report released today by the Organization for Economic Cooperation and Development documents that "the gap between rich and poor in OECD countries has reached its highest level for over 30 years," and, as an OECD official said, "the social contract is starting to unravel in many countries. . . Without a comprehensive strategy for inclusive growth, inequality will continue to rise." As The Washington Post said today: the report "comes as rising dissatisfaction with economic inequality has spilled over into street protests in dozens of cities around the world." Moreover, "the United States, Turkey and Israel have among the largest ratios between the incomes of those at the top and the bottom, roughly 14 to 1."

Drone technology is but the latest War on Terror weapon to be imported onto U.S. soil, and the dangers should be manifest. One article prominently touted on AeroVironment's website hails the "Switchblade," which the author excitingly describes as "an ingenious, miniature unmanned aerial vehicle (UAV) that is also a weapon" and "the leading edge of what is likely to be the broader, even wholesale, weaponization of unmanned systems. " The Switchblade drone is "a very short-range, low-altitude, lightweight, tube-fired UAV that is carried and deployed by individual warfighters." It's ideal for killing a person "behind barriers, around the corner of a building or in a cave." Because of how small, light and easily deployable it is -- it is meant to be used by a single individual on the ground, at the scene of the target -- the article dubs this new product "the ultimate assassin bug." I found that article because it was touted on the same website of the same drone company featured by NPR; that might have been an informative fact to include in the story.

As I've written about before, a prime aim of the sprawling Surveillance State -- justified in the name of Terrorism -- is to empower the government domestically. Indeed, the War on Terror now has a decidedly domestic flavor: with bin Laden dead and Al Qaeda in Afghanistan/Pakistan virtually nonexistent (i.e., with the original War on Terror justifications now gone), U.S. officials have been emphasizing that the leading threat is "homegrown Terrorists," and the latest new War on Terror bill passed by the Senate focused on domestic powers and U.S. citizens as much as anything else. And, of course, the Obama administration has infamously asserted the power to target even U.S. citizens for assassination without a shred of due process. While one can certainly envision how drones could perform legitimate police functions, the importation of instruments like drone technology into domestic police activities raises a slew of profound questions, and there is one thing we can be certain of: establishment media outlets like NPR will do their best to obscure and belittle those questions while glorifying these weapons. That's what it means to be the "establishment media."

UPDATE: The Los Angeles Times reported yesterday that the head of the drone program for Homeland Security, Tom Faller, is being investigated for possible ethics violations because he joined the Board of the above-referenced drone industry association while overseeing the drone program for that agency. As is true with virtually all of this militarization and War on Terror abuse, the motive is not merely power but also profit, and the almost complete erosion of the wall between the public and private sector is a key instrument for how policy justified in the name of security is exploited for private gain (as one commenter put it here the other day: every time the U.S. Government gets to explode something, more money is transferred from the 99% to the 1%).

Meanwhile, below is a 30-second Air Force recruitment TV ad (h/t SuperBowlXX); how can anyone, after seeing this, not swoon over the greatness of drones? It's precisely because of their constant glorification in the War on Terror that their use is virtually inevitable on U.S. soil: if they're such fantastic weapons for stopping Bad Guys over there, why wouldn't they be used over here?