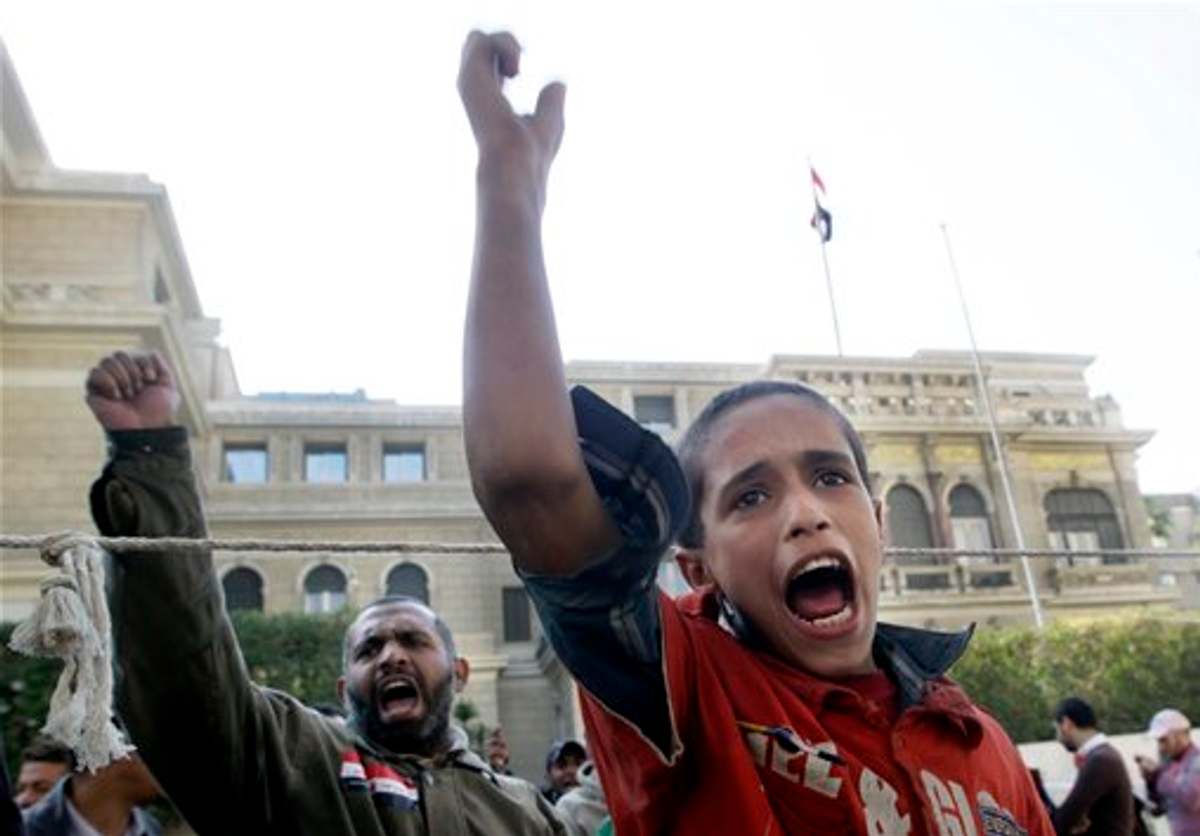 An Egyptian boy shouts slogans during a protest demanding the ruling military council to step down in front of the cabinet office in Cairo, Egypt, Sunday, Dec. 4, 2011. (AP Photo/Amr Nabil)
--

When the Center for American Progress' Think Progress blog recently compiled all of the inspiring foreign policy successes of our nation's strong and resolute Commander-in-Chief, they listed -- alongside the assassination of a U.S. citizen without due process and increased deference to Israel -- what they hailed as the President's having "supported democratic transition in Egypt." President Obama apparently deserves credit for this notwithstanding the fact that his administration supported President Mubarak up to the very last minute; Secretary of State Hillary Clinton, in 2009, proclaimed: “I really consider President and Mrs. Mubarak to be friends of my family”; and Obama, once Mubarak’s fall became inevitable, tried to engineer the empowerment of Omar Suleiman, Mubarak’s long-time trusted lieutenant most responsible for its torture, brutality and domestic repression. If that's supporting democracy in Egypt, I would hate to see what opposition entails.

Over the past several weeks, the Egyptian government has used brutal and indiscriminate violence against citizen protesters. On November 21, The Wall Street Journal reported that "Military police used rubber bullets, truncheons and tear gas in a failed attempt to expel protesters from" Tahrir Square and that "at least eight people were killed . . . and 192 people were injured." The same day, The New York Times reported that "the Health Ministry said at least 23 people had died, and several doctors treating patients at a field clinic and nearby hospital said several had been killed by live ammunition, contrary to denials by the Interior Ministry." That day, White House spokesman Jay Carney issued a bizarrely neutral statement which called for "restraint on all sides" -- a statement that triggered predictable and justifiable anger among Egyptians:

The US attempt to reposition itself as a supporter of democracy and human rights in the Middle East is being undermined by a growing Egyptian perception that Washington will back Egypt's military junta unreservedly despite its increasing repressiveness.

That perception was reinforced yesterday, when a White House statement on the clashes between protesters and security forces appeared to place the blame equally on both sides for violence that has killed at least 29 protesters since Saturday. . . .

That call for restraint on "all sides," in the face of days of excessive use of force by police and soldiers, was met with incredulity in Cairo. Security forces have shot not only tear gas and rubber bullets, but bird shot and live ammunition at protesters throwing rocks and Molotov cocktails. "Should we stop dying? Is that how we should show restraint?" scoffed protester Salma Ahmed as heavy gunfire echoed through Tahrir Square.

That's standard fare for the U.S.: when a government it dislikes uses violence against its own citizens, it vehemently denounces that government and depicts itself as the guardians of democracy and protest rights; but when an allied government does exactly the same thing, it simply calls for "restraint on all sides" -- as though the protesters being killed by U.S.-backed regimes are on equal moral footing with the regimes doing the killing -- or, at best, condemns the deaths while refusing to blame the government. In the case of Egypt, all of this is part and parcel with the Obama administration's conspicuous support for the regime despite ongoing abuses; as the Christian Science Monitor explained two weeks ago:

In recent months, Egypt’s military rulers have become increasingly repressive – torturing with impunity, jailing bloggers, sending more than 12,000 civilians to military tribunals, and using excessive force against protesters, killing dozens. Yet as the abuses have stacked up, the US has mostly refrained from public criticism of Egypt’s military, whose $1.3 billion in US aid could come under review if critics in Congress prevail. Washington's relative silence has created the appearance that the US has returned to its Mubarak-era policy of turning a blind eye to its ally’s abuses to preserve the relationship.

Unsurprisingly in light of these facts, the actual Egyptian people don't share CAP's view that President Obama deserves credit for supporting their transition to democracy, as multiple polls over the last 18 months show that the U.S. is viewed even more unfavorably in that country than it was during the Bush years. That's particularly disappointing given that Obama's April, 2009 speech in Cairo was one of the more impressive things he's done: standing in the middle of the Muslim world, in front of President Mubarak, and eloquently arguing for the imperatives of democratic reform. But Egyptians obviously have come to realize, as many Americans have as well, that President's Obama's pretty, pretty speeches are often not backed up -- or are even aggressively negated -- by his subsequent actions.

All of this is likely to get worse as a result of yesterday's disclosures by Amnesty International that, even as the Egyptian military brutally attacked protesters, the U.S. continued to arm them with crowd-control weaponry:

Data obtained by Amnesty International shows that the US has repeatedly transferred ammunition to Egypt despite security forces' violent crackdown on protesters.

A shipment for the Egyptian Ministry of Interior arrived from the US on 26 November carrying at least seven tons of "ammunition smoke" - which includes chemical irritants and riot control agents such as tear gas.

It was one of at least three arms deliveries to Egypt by the US company Combined Systems, Inc. since the brutal crackdown on the "25 January Revolution" protesters.

It's been reported on several occasions both before Mubarak's departure and since that tear gas used against Egyptian protesters bore the "Made in the USA" label -- why do they hate us? -- but the referenced shipment here arrived less than a week after the Egyptian military killed at least two dozen protesters in Tahrir Square and injured dozens more (though it left a port in North Carolina several weeks earlier). The other two shipments Amnesty documents contained a combined total of 38 tons of ammunition. As Amnesty details, these shipments were made with the express permission of the U.S. Government:

On 1 December, a US State Department spokesperson confirmed that “export licences were approved to two US companies for the export of tear gas and other non-lethal riot control agents to the Egyptian Government. And the most recent export license approval occurred in July”.

"These licences were authorized during a period where the Egyptian government responded to protests by using excessive and often lethal force. It is inconceivable that the US authorities did not know of evidence of widely documented abuses by the Egyptian security forces. These licences should not have been granted," said [Amnesty's] Brian Wood.

Amnesty has called on the U.S. to cease arming the Egyptian military unless and until there is a cessation to the violent crackdowns. One can debate whether the U.S. for pragmatic reasons should continue to arm and fund the Egyptian regime -- that's at least an honest debate to have -- but pretending that the Obama administration has been and is on the side of protesters is not an example of that kind of debate. Proving yet again how the people of the Muslim world are often better informed about the actions of the U.S. in their part of the world than Americans themselves, the people of Egypt are obviously well aware of these facts.

A writer for the television program Family Guy and a long-time commenter here, Patrick Meighan, was arrested very early Wednesday morning (1:00 am) for participating in Occupy Los Angeles and refusing to leave when ordered to do so; I highly recommend reading his harrowing account of how he was treated during and after his arrest. The news site Arabist reported that, on Egyptian state television during the latest violence in Tahrir Square, one official, obviously referring to the Occupy movement, said: "In the West they suppress protests, so why can't we do it here?" The lethal attacks on Egyptian protesters are not comparable in magnitude to the abuse of Occupy protesters, though they do stem from the same mentality; but what is true is that it is impossible for the U.S. to demand that other governments respect the right of peaceful protest if that right is not respected on U.S. soil. Of course, that will only matter if the U.S. ever does decide to genuinely defend that right rather than using it as an opportunistic club to beat those regimes its dislikes while overlooking (and even fueling) the same abuses from its client states.

UPDATE: It's at least just as difficult for the U.S. to advocate credibly for more openness and transparency around the world when it itself is so obsessed with secrecy that it even refuses -- on secrecy grounds -- to disclose documents that the entire world can easily read. But that kind of blatant contradiction is no impediment to their trying: Hillary Clinton, for instance, will be attending a conference tomorrow defending Internet freedom around the world (it "will make a stand for freedom of expression on the internet, especially on behalf of cyber dissidents and bloggers") at the very same time that the administration of which she is a part continues its attempt to prosecute and destroy WikiLeaks and to harass its supporters.