There are many people who can credibly claim to defend Internet Freedom; Obama officials are not among them 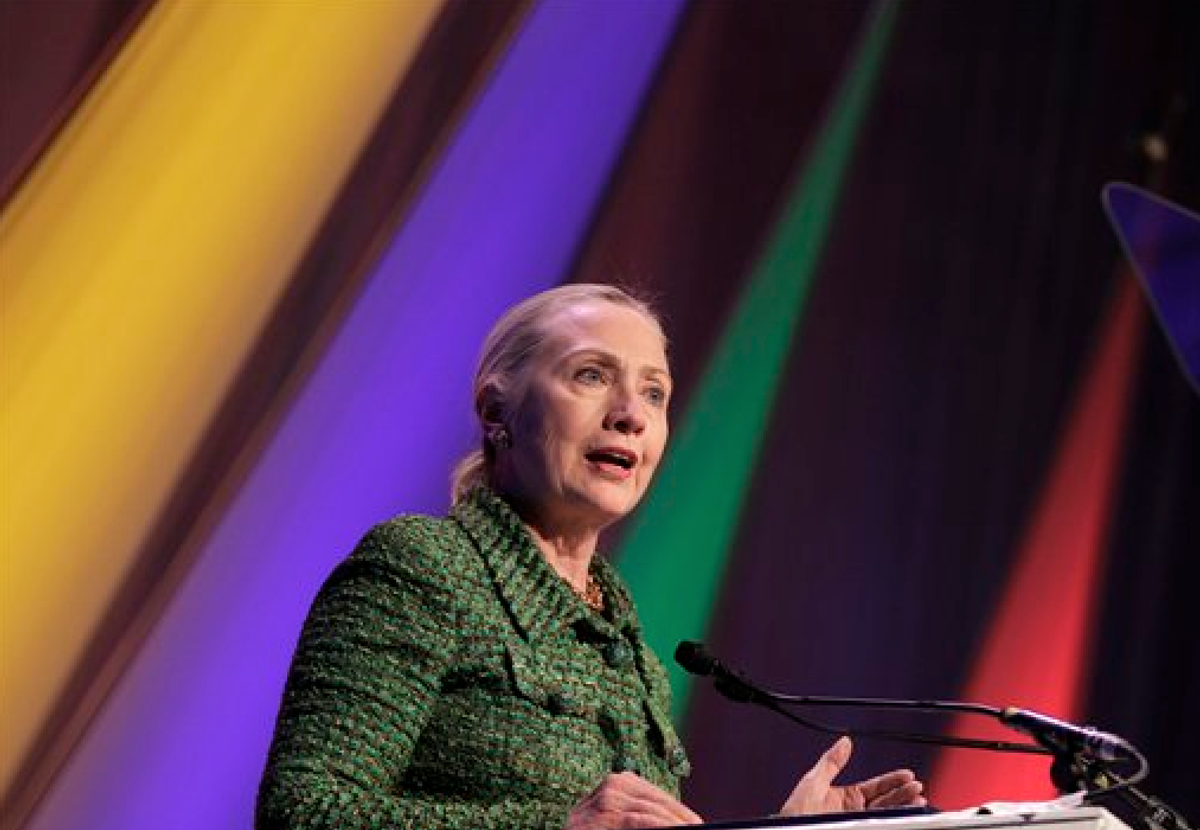 Hypocrisy from the U.S. Government -- having U.S. officials self-righteously impose standards on other countries which they routinely violate -- is so common and continuous that the vast majority of examples do not even merit notice. But sometimes, it is so egregious and shameless -- and sufficiently consequential -- that it should not go unobserved. Such is the case with the speech delivered by Secretary of State Hillary Clinton yesterday at a Conference on Internet Freedom held at the Hague, a conference devoted to making "a stand for freedom of expression on the internet, especially on behalf of cyber dissidents and bloggers." Clinton has been flamboyantly parading around for awhile now as the planet's leading protector of Internet freedom; yesterday she condemned multiple countries for assaulting this freedom and along the way actually managed to keep a straight face as she said things like this:

[T]he right to express one’s views, practice one’s faith, peacefully assemble with others to pursue political or social change – these are all rights to which all human beings are entitled, whether they choose to exercise them in a city square or an internet chat room. . . . This is an urgent task. It is most urgent, of course, for those around the world whose words are now censored, who are imprisoned because of what they or others have written online, who are blocked from accessing entire categories of internet content, or who are being tracked by governments seeking to keep them from connecting with one another. . . .

[T]he more people that are online and contributing ideas, the more valuable the entire network becomes to all the other users. In this way, all users, through the billions of individual choices we make about what information to seek or share, fuel innovation, enliven public debates, quench a thirst for knowledge, and connect people in ways that distance and cost made impossible just a generation ago.

But when ideas are blocked, information deleted, conversations stifled, and people constrained in their choices, the internet is diminished for all of us. What we do today to preserve fundamental freedoms online will have a profound effect on the next generation of users. . . .

The United States wants the internet to remain a space where economic, political, and social exchanges flourish. To do that, we need to protect people who exercise their rights online, and we also need to protect the internet itself from plans that would undermine its fundamental characteristics.

She astutely observed that "those who push these plans often do so in the name of security." She added that "the first challenge is for the private sector to embrace its role in protecting internet freedom," which -- she lamented -- has not always happened: "A few years ago, the headlines were about companies turning over sensitive information about political dissidents. Earlier this year, they were about a company shutting down the social networking accounts of activists in the midst of a political debate." She concluded with a real flourish: "Our government will continue to work very hard to get around every barrier that repressive governments put up" even though such governments will try to maintain those barriers "by resorting to greater oppression."

What Hillary Clinton is condemning here is exactly that which not only the administration in which she serves, but also she herself, has done in one of the most important Internet freedom cases of the last decade: WikiLeaks. And beyond that case, both Clinton specifically and the Obama administration generally have waged a multi-front war on Internet freedom.

First, let us recall that many of WikiLeaks' disclosures over the last 18 months have directly involved improprieties, bad acts and even illegalities on the part of Clinton's own State Department. As part of WikiLeaks' disclosures, she was caught ordering her diplomats at the U.N. to engage in extensive espionage on other diplomats and U.N. officials; in a classified memo, she demanded "forensic technical details about the communications systems used by top UN officials, including passwords and personal encryption keys used in private and commercial networks for official communications" as well as "credit card numbers, email addresses, phone, fax and pager numbers and even frequent-flyer account numbers" for a whole slew of diplomats, actions previously condemned by the U.S. as illegal. WikiLeaks also revealed that the State Department -- very early on in the Obama administration -- oversaw a joint effort between its diplomats and GOP officials to pressure and coerce Spain to block independent judicial investigations into the torture policies of Bush officials: a direct violation of then-candidate Obama's pledge to allow investigations to proceed as well being at odds with the White House's dismissal of questions about the Spanish investigation as merely "hypothetical." WikiLeaks disclosures also revealed that public denials from Clinton's State Department about the U.S. role in Yemen were at best deeply misleading. And, of course, those disclosures revealed a litany of other truly bad acts by the U.S. Government generally.

What has the U.S. Government done in response to these newsworthy Internet revelations? It launched what The Sydney Morning Herald this week -- citing classified Australian diplomatic cables -- described as "an 'unprecedented' US government criminal investigation": "'unprecedented both in its scale and nature." It has convened a Grand Jury to criminally investigate WikiLeaks -- for nothing more than doing what newspapers routinely do: publishing newsworthy classified information received from sources. It stood passively by -- if it did not actively participate in -- highly sophisticated cyberattacks that prevented WikiLeaks from being hosted any longer on a U.S. site. It secretly sought from Twitter a slew of records showing the online activities of WikiLeaks supporters, including a sitting member of Icleand's Parliament. It has serially harassed American supporters of WikiLeaks by repeatedly detaining them at the airport and seizing their electronic goods such as their laptops, all without any warrants. And Senate Democrats demanded Julian Assange's prosecution for espionage while bullying private corporations to cut off all of WikiLeaks' funding sources.

Meanwhile, Clinton's State Department warned international relations students that they had better not discuss, link to or even read the cables -- which were making news all over the world -- or else they would be jeopardizing their ability to work in government. The White House warned government employees not to even look at those documents online -- even though the world's largest newspapers were publishing them -- and threatened that they would be breaking the law if they did. The State Department instructed its employees that all of those documents, published all over the world, must still be treated as secret. The Obama administration then blocked Internet access to those documents for hundreds of thousands of federal employees, even having the Library of Congress -- one of the world's largest libraries -- install blocks to ensure that nobody could use library computers to read those documents. Those are the acts of a government and a State Department seeking to block access to and discussion of evidence of their own wrongdoing and to punish as criminals those who reported it.

Beyond WikiLeaks, the Obama administration (following in the footsteps of Saudi Arabia) is seeking "a new federal law forcing Internet e-mail, instant-messaging, and other communication providers offering encryption to build in backdoors for law enforcement surveillance." The Obama DOJ has insisted that it has the right to read opened emails with no warrants from a court. The Chairwoman of the Democratic Party, Rep. Debbie Wasserman-Schultz, is sponsoring a bill under which "Internet providers would be forced to keep logs of their customers' activities for one year." The Washington Post‘s Dana Priest and William Arkin reported in their “Top Secret America” series last year: "Every day, collection systems at the National Security Agency intercept and store 1.7 billion e-mails, phone calls and other types of communications."

Perhaps worst of all, many of the administration's key allies in the Senate are now pushing a bill -- in the name of stopping online piracy (SOPA) -- that would vest the U.S. government and the largest corporations with draconian powers literally to shut down or otherwise disable Internet sites without due process. Hillary Clinton personally "taciticly endorsed that bill," enabling the bill's key Democratic Congressional supporters to tout State Department support for it. As EFF's Trevor Timm recently wrote: "Ironically, we know from the WikiLeaks cables that the State Department has also aggressively lobbied many other countries for strict new laws similar to SOPA. They have even offered to fund enforcement and literally draft the laws that sacrifice free speech for greater copyright protection for Hollywood."

So let's review Secretary Clinton's list of grave threats to Internet freedom and see how it applies to her actions and those of the Obama administration. "Those around the world whose words are now censored . . . who are blocked from accessing entire categories of internet content" - check. Attempting to undermine the Internet's ability to "enliven public debates, quench a thirst for knowledge" - check. "Ideas are blocked, information deleted, conversations stifled, and people constrained in their choices" - check. "Companies turning over sensitive information about political dissidents" and "a company shutting down the social networking accounts of activists in the midst of a political debate" -- check. "Those who push these plans often do so in the name of security" - big check.

Internet freedom -- preventing government and corporate control of the Internet -- is indeed one of the most vital political fights of this generation, perhaps the most vital. There are many people in a position credibly to lead and support that fight. Hillary Clinton and the government in which she serves is most definitely not among them; more often than not, they are among the enemies of those freedoms.

Last night, I was on Cenk Uygur's new program on CurrentTV discussing SOPA as well as the pending detention bill; a brief excerpt of that segment can be seen here.