The 10 best movies of 2011: Brilliant movies for a bleak year 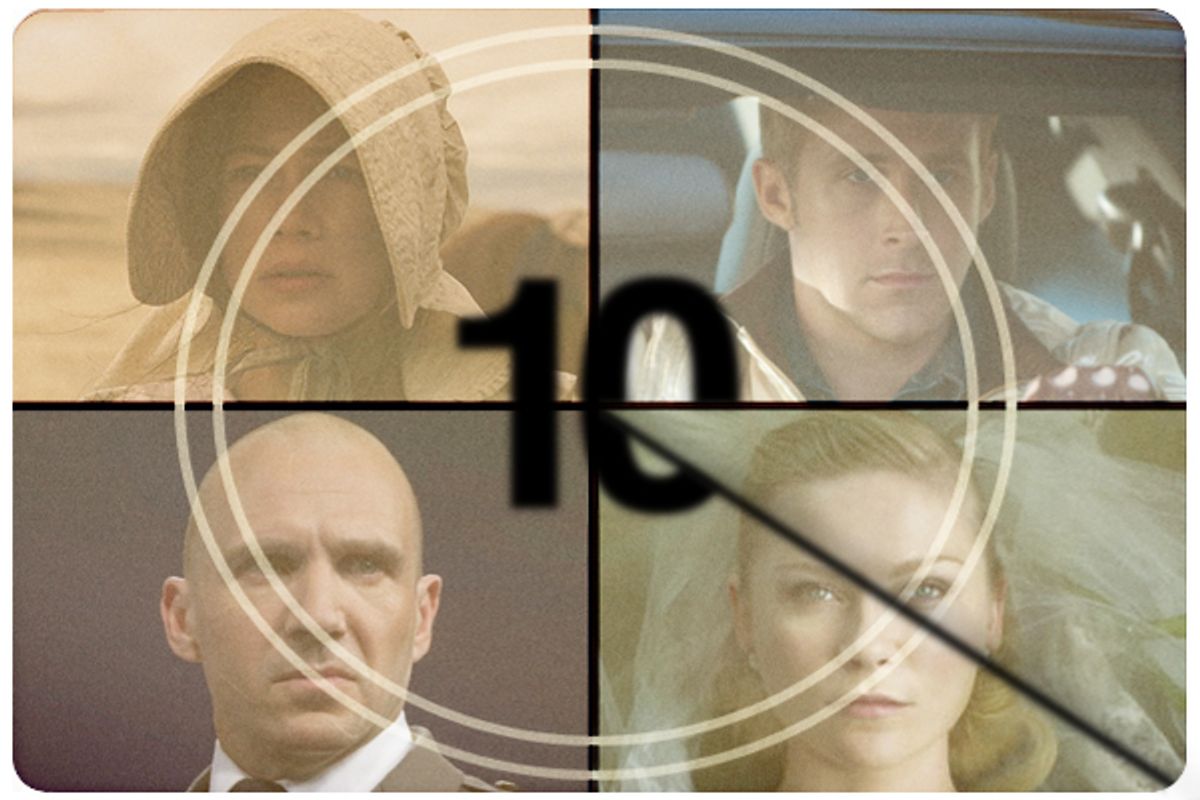 Crafting an annual top-10 list is no doubt a ludicrous exercise, and I'm not promising I'd have given you the same answers a month ago, or will give you the same ones a month from now. But over the years I've grown to appreciate the fact that it forces critics to stop hiding behind relativistic weasel words and high-flown rhetoric, and forces me to defend the murky and individual question of taste. The fact that I -- ever so slightly -- prefer "Coriolanus" to "Drive," and "Mysteries of Lisbon" to "Uncle Boonmee Who Can Recall His Past Lives," definitely tells you something about me as a person and a movie critic.

So does the fact that such prominent 2011 films as "The Girl With the Dragon Tattoo," "Harry Potter and the Deathly Hallows: Part 2," "War Horse" and "The Tree of Life" do not appear in my top 20. Which isn't the same thing, of course, as saying I didn't like them or would not recommend them. Those are all pretty good movies! If you're sufficiently interested, you can now read my 2011 Movie List -- ranking virtually every movie I have seen all the way through this year. There are a handful of major 2011 releases I haven't caught yet and hence are not considered either here or on the crazy-complete list, including "The Iron Lady," "Mission: Impossible -- Ghost Protocol," "Sherlock Holmes: Game of Shadows" and "Extremely Loud and Incredibly Close." (As you'll see below, one film that made this list hasn't yet been released; I've been assured it will open on schedule before the end of the year.)

This was a bad year at the box office after the big commercial successes of 2010, and if you subtracted the "Harry Potter" and "Twilight" franchises, it would've been an unmitigated disaster. I don't assume any connection between that fact and the fact that it was one of the best years I can remember for moving, exciting, ambitious, adventurous cinema, but it does make you wonder. In a time of heightened anxiety and economic downturn, the movies typically do well, but Hollywood largely failed to provide rousing distractions this year, and art-house fare that engaged the tense national mood didn't find much of an audience.

I'm informally declaring a tie at the top of my list between "Poetry" and "Melancholia," which I think are both genuine masterpieces, with "Coriolanus" and "Take Shelter" just a smidgen of a smidgen behind. But ties are for wussies (well, OK, and for professional soccer, and for the NFL and NHL back when they were worth a damn), so I've ranked them -- and if my No. 1 choice seems eccentric, I swear to Pete that wasn't the point. I look forward to your scathing comebacks and lists vastly superior to my own (because they are yours). See you in the comments.

1. Poetry
Yes, it's a foreign-language film from a country unfamiliar to most Americans, released last winter in a handful of cities, but there's nothing perverse or elitist about this choice, as anyone who's seen Korean director Lee Chang-dong's beautiful and tragic masterpiece will attest. An elderly woman facing early-stage dementia (played by longtime Korean star Yun Jung-hee), her brooding and resentful grandson, a dead girl found floating in the river and, yes, a poetry workshop -- these are the elements of this elegant, compact tale of life and death, told with the command of Bergman or Tolstoy or Chekhov.

2. Melancholia
Wedding farce meets apocalyptic science fiction in Lars von Trier's witty, wrenching and spectacular fable of depression, a film so terrific von Trier himself tried to sabotage it by talking about Hitler. Kirsten Dunst and Charlotte Gainsbourg are the central odd couple, as a light-and-dark pair of sisters, who threaten to destroy each other just as the eponymous hidden planet threatens to destroy ours. A tremendously rich supporting cast, prodigious cinematography (by Manuel Alberto Claro) infused with German Romanticism and a depth of human compassion previously unsuspected in von Trier. A profoundly eccentric film, to be sure (and one not overly concerned with naturalism), but an absolutely great one.

3. Take Shelter
Sadly, Michael Shannon's massive, almost demonic performance as a working-class Ohio man possessed by apocalyptic visions will be overlooked by the Oscars, as will writer-director Jeff Nichols' terrifying Weather Channel-meets-"The Omen" horror movie. But no other American film released in 2011 captured the desperate national mood the way this low-budget indie did. And don't miss superb supporting turns from Jessica Chastain and Shea Whigham.

4. Coriolanus
Shakespeare's bleakest tragedy is restaged in the media age by star and director Ralph Fiennes and screenwriter John Logan, with devastating results. (Notice a certain downward aspect in my choices this year?) Fiennes gives his greatest screen performance as the turncoat Roman general who can't play politics, scorns an Occupy-style public uprising, and joins forces with archrival Gerard Butler to make war on his own hometown. Fiennes is matched, if not outdone, by Vanessa Redgrave's blistering performance as Volumnia, Coriolanus' ruthless and bloodthirsty mom.

5. Mysteries of Lisbon
If you miss the fancy-dress, densely plotted 19th-century soap operas that European cinema used to do so well, then this one's for you. In the hands of Raúl Ruiz, a vastly underappreciated Chilean director who's spent most of his career in France, a legendary Portuguese novel by Camilo Castelo Branco about an orphan's search for his patrimony becomes a dense and intoxicating weave of nested narratives, after the fashion of Dickens or Balzac (or, for that matter, the Mexican telenovela). Terrific cast, terrific cinematography, agreeably elliptical storytelling.

6. A Separation (not yet reviewed)
Iranian director Asghar Farhadi's complex and compelling social melodrama offers a fascinating look at daily life inside the Islamic Republic, where a quarreling couple discuss their potential divorce with a bored mullah, and a seemingly minor domestic mishap opens the door to a collision of class, money, religion, morality and all the contradictions of Iranian existence. More than that, "A Separation" is a magnificent, mature and marvelously humane film with a great ensemble cast, proof that the cruelties of the Iranian regime have not crushed that nation's artists. (Limited release will begin Dec. 30 in New York and Los Angeles, with wider release to follow in 2012.)

7. Drive
Doggone it, I can't quite make my mind up about "Drive," but that's mostly a good thing -- and if you feel any love whatever toward the American movie tradition, I think it's got to make your list. Did star Ryan Gosling and hot Danish director Nicolas Winding Refn get overexposed after their Cannes triumph? Did the movie underwhelm audiences who wanted something a little less arch and film-history-related, and a little more fast and furious? Absolutely, but that doesn't change the fact that this ultra-violent, ultra-stylish film is a sneaky, brilliant genre exercise, and a Euro-American collaboration movie geeks will study for years.

8. Uncle Boonmee Who Can Recall His Past Lives
More mixed feelings: Thai art-house god Apichatpong Weerasethakul's moody, mysterious, meditative picture about a provincial farmer facing mortality is closer to avant-garde experimental film than to the narrative tradition of almost everything else on this list. A Cannes colleague dubbed it "a Buddhist tone-poem about death," and while he was being snarky, that's right on the money. And it's a gorgeous, loopy experience unlike any other, if you've got the patience for it. A recalcitrant water buffalo, human-catfish sex, a guy in a silly monkey-ghost costume, alternate-universe paradoxes and some very straightforward human emotion. Just don't expect it to "make sense."

9. Meek's Cutoff
Along with "Drive," director Kelly Reichardt's pioneer-era drama starring Michelle Williams as a covered-wagon wife lost on the Oregon Trail, circa 1845, is the most divisive entry on this list. Some viewers hate it and want to flee with the first long-long-shot of people walking and not talking, while others are mesmerized by this intimate epic of racial and gender conflict among 19th-century cross-country emigrants. I see "Meek's Cutoff" as a masterful use of cinematic space and time, after the fashion of early Terrence Malick, and also (probably) an allegory about America today. But I've gotten more angry WTF letters from readers on this one than about anything else I reviewed all year.

10. Putty Hill
After a long-planned film fell through, young director Matt Porterfield made this semi-improvised docudrama in the ramshackle urban-meets-rural Baltimore neighborhood where he grew up, and the result is one of the most original American indies in many years. A mixture of Robert Altman social realism and Godardian abstraction, "Putty Hill" explores the ripple effects of a young drug addict's death, and culminates with a knockout karaoke performance of "My Heart Must Go On." Along the way, Porterfield captures the beauty and mystery of this rugged, semi-suburban social and physical landscape with affection but without sentimentality; the list of American movies that depict working-class life with this much understanding is short indeed.