The U.S. is increasingly relying on the brutal dictator of Uzbekistan to get military supplies into Afghanistan 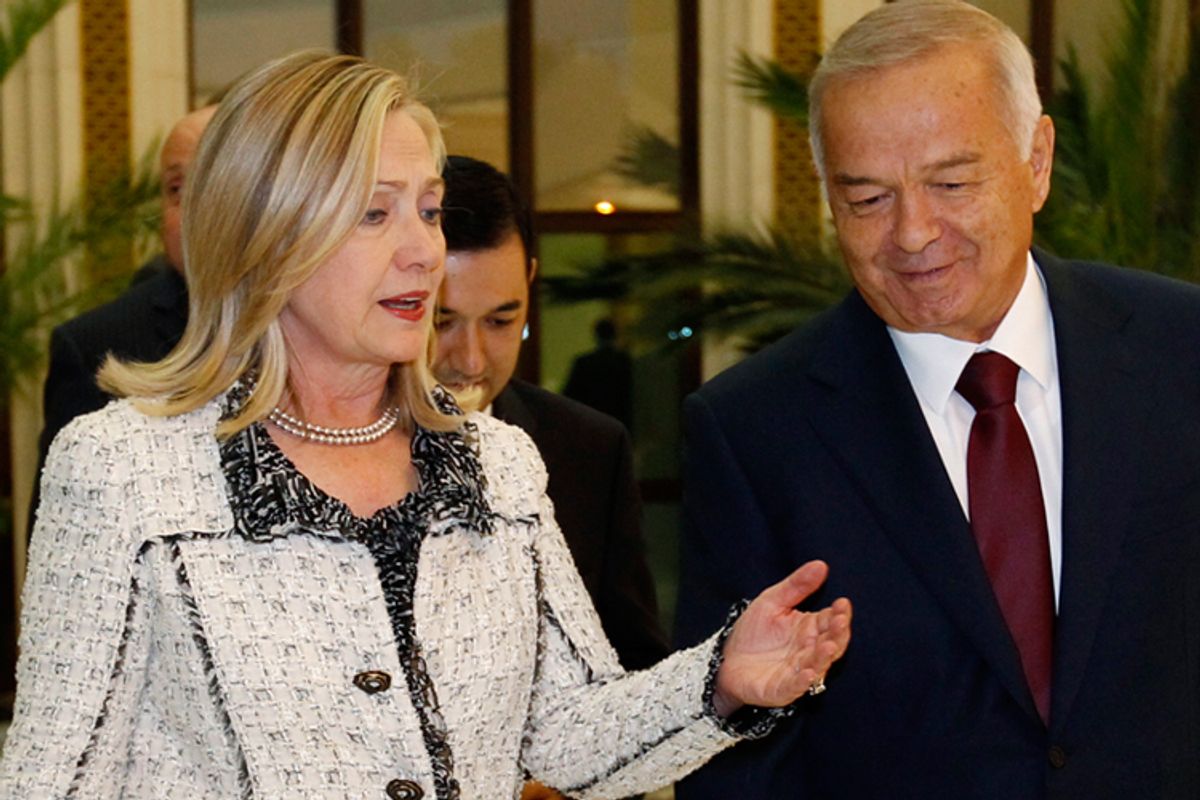 It's been flying largely below the media radar, but the human rights situation in Uzbekistan is getting worse just as the Obama administration is strengthening ties with the Central Asian nation because of its strategic importance to the war in Afghanistan.

A new Human Rights Watch report finds that torture by police and security forces is widespread and used with impunity.

The report "documents the use of various forms of torture and ill-treatment in pre-trial detention since habeas corpus and other reforms were adopted [in 2008], such as beatings with rubber truncheons and water-filled bottles, electric shock, hanging by wrists and ankles, rape and sexual humiliation, asphyxiation with plastic bags and gas masks, and threats of physical harm to loved ones."

And there's this: "[T]he report documents the authorities’ crackdown on Uzbekistan’s fledgling legal profession, particularly against criminal defense lawyers who have dared to raise allegations of torture and take on politically sensitive cases."

But because of tensions in the US-Pakistan relationship, the Obama administration has been cultivating a relationship with the longtime dictator of Uzbekistan, Islam Karimov. The U.S. increasingly relies on the so-called Northern Distribution Network to get supplies into Afghanistan, which borders Uzbekistan to the south. Obama has personally talked to Karimov on the phone and Hillary Clinton traveled to Uzbekistan in October to shore up the relationship. And the administration has been pushing Congress to resume military aid to Uzbekistan, which had been subject to restrictions because of the Karimov regime's rotten human rights record.

On this point, Human Rights Watch is scathing.

"[T]his policy of 'engagement without strings' is a short-term strategy that has compounded Uzbekistan’s deepening human rights crisis," the report argues. "Indeed, such undue praise for hollow reform combined with increasingly quiet diplomacy has allowed the country’s torture epidemic to worsen and has further imperiled Uzbekistan’s embattled human rights activists and lawyers, sending an unmistakable signal to the Uzbek government that brutalizing the population and stonewalling civil society are cost-free."

Asked to comment on that accusation, a State Department official sent over this statement that stresses "positive developments" in Uzbekistan:

In the last year Uzbekistan has taken some steps on Trafficking in Persons, including efforts to combat sex and illegal labor trafficking. Uzbekistan has also recently released some imprisoned political activists. We do not want to overstate Uzbekistan’s progress on human rights issues, but it is appropriate to note positive developments just as we discuss setbacks.

We continue to urge the government of Uzbekistan to make progress on human rights issues, including civil and political rights and fundamental freedoms of religion, expression, assembly, and association.

There's a larger takeaway from the HRW report. It highlights the fact that the ongoing debate about the human rights implications of leaving Afghanistan has rarely considered the secondary effects of the status quo, like the propping up of the Karimov regime in service of the war effort.