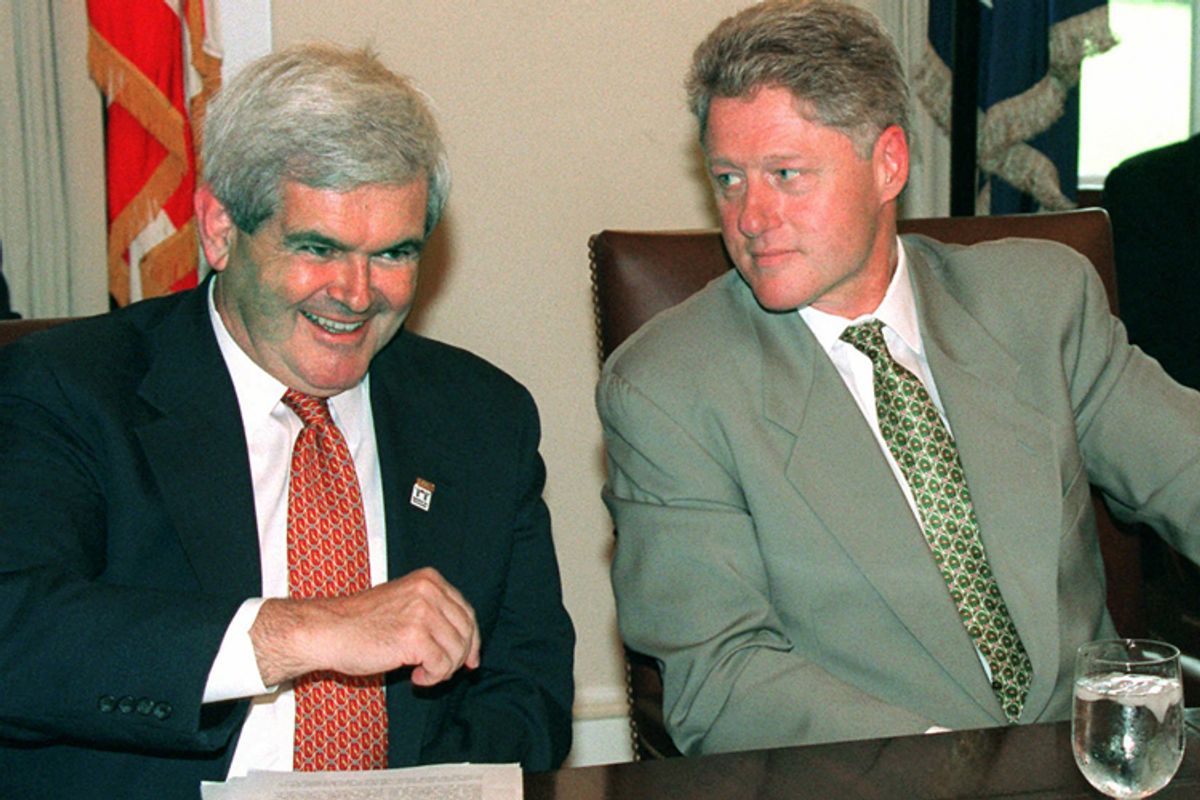 It wasn't long ago that the mere hint of an association with Bill Clinton was the kiss of death in Republican politics. Maybe you remember the run-up to the pivotal South Carolina primary in 2000, when John McCain, stung by a barrage of negative attacks from his opponent's campaign, declared in an ad that George W. Bush "twists the truth like Clinton." So stinging was that charge that Bush brought it up at the start of their next debate, accusing McCain of the lowest form of politics.

"You can disagree on issues," Bush said. "We'll debate issues. But whatever you do, don't equate my integrity and trustworthiness to Bill Clinton."

Contempt for all things Clinton was the animating force on the right for more than a decade, from the moment Bill was elected in 1992 until well after he left the White House, with the prospect of a Clinton restoration hovering over American politics for most of the aughts. But when Barack Obama unexpectedly beat out Hillary in 2008 and became the face of national Democratic politics, it gave the right a new all-purpose villain -- and an incentive to embrace a revised, more Clinton-friendly version on the 1990s.

Nowhere is this shift more evident than in the presidential campaign of Newt Gingrich, whose own career arc neatly reflects both the right's pre- and post-Obama consensus about Bill Clinton. When the Gingrich of today speaks of the Clinton-era, he tends to portray it as a period of productive, bipartisan cooperation between the Republican House that he led and a moderate Democratic White House. Asked, for instance, in last Saturday's debate how he'd create jobs as president, he pointed to the prosperity of the Clinton years:

Well, I think that there's a clear record, I worked with Ronald Reagan in the early '80s and his recovery program translated into today's population of about 25 million new jobs in a seven-year period. As Speaker of the House, I worked with-- President Clinton and he followed with a very similar plan. And we ended up with about 11 million new jobs in a four-year period. Went down to 4.2% unemployment.

And in an interview with the Nashua Telegraph on Tuesday, Gingrich claimed that the spirit that brought about welfare reform in 1996 and the Balanced Budget Act in 1997 is now missing from Washington: “This is really pathetic. How blindly partisan they are and how unwilling they are to really relax and get to know each other."

Of course, if you remember much about the 1990s, then you recognize the absurdity of what Gingrich is saying. During the first two years of Clinton's presidency, Republicans -- led by Gingrich -- resisted him just as unanimously and just as hysterically as they've resisted Obama. When Clinton proposed a deficit-fighting budget that would raise taxes on the top 1.2 percent of income-earners, every single Republican in Congress voted against it. Gingrich himself predicted that it would plunge the country back into a recession and cost millions of jobs.

And when Gingrich and the GOP rode the midterm backlash of 1994 to their first House majority in 40 years, they quickly forced a showdown with Clinton over their demands to cut Medicare by $270 billion, which ended in a government shutdown that drained Gingrich's popularity to near-record lows. Only when it was clear that Clinton had reestablished his political strength were Republicans willing to deal with him, and even then they still managed to impeach him before his second term ended.

The reality of the 1990s is that the conservative movement that drives the modern Republican Party regarded Clinton with the same suspicion and animosity that it has regarded every Democratic president of the modern era. He was the enemy, he'd won office through less than honorable means, and he was to be fought every step of the way. Feeding and channeling this mindset was key to the rise of Gingrich, who served as the face of the congressional GOP's assault on the Clinton White House. "Counterculture McGoverniks" is how he referred to the first couple back in those days, and he also led the charge in hyping the supposed Whitewater scandal.

Against that backdrop, it makes sense that McCain saw linking Bush to Clinton as a killer GOP primary strategy in 2000, just as it's understandable why Bush took such strong exception to the charge. And if Hillary Clinton had somehow won in '08, then rest assured the right would still be at war with the Clintons today, with Gingrich reminding GOP primary voters of all of the gallant fight he'd led against them. But Obama won, and his election instantly altered the right's psychology.

It's hard to remember now, but just four years ago, when everyone still assumed that Hillary would fend him off in the Democratic primaries, Obama was generally treated as a sympathetic figure by the right -- the likable well-meaning idealist who was about to get chewed up by the vicious Clinton Machine. But when Obama knocked her off, the roles were reversed, and the Obama-as-dangerous-radical meme took hold, while Hillary was celebrated as a martyr to white, working-class voters. In this same spirit, it no longer made sense for the right to vilify Bill Clinton, whose presidency could now be presented as an example of the kind of sensible, centrist Democratic leadership that Obama and his far-left comrades were thumbing their noses at.

So just like he was back then, Gingrich is once again channeling his party's basic attitude toward the Clinton years. Except now he's saying: Actually, they were pretty good.