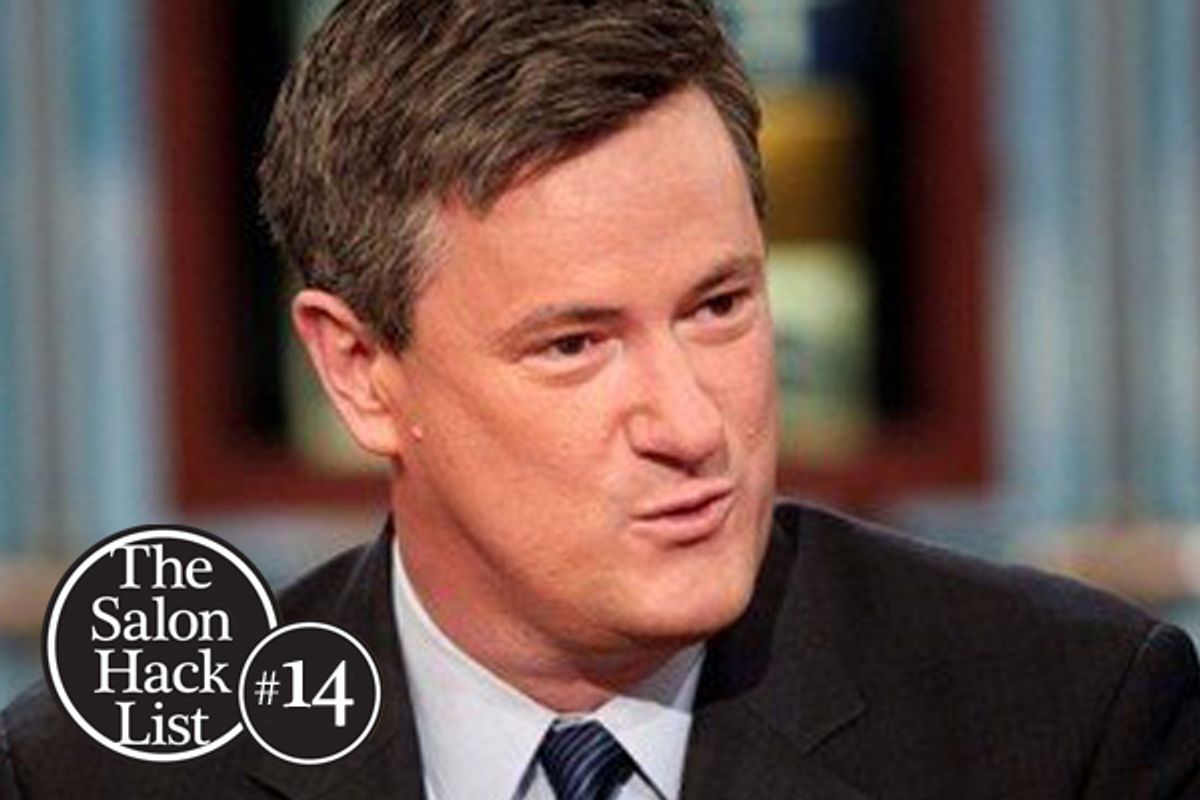 Nothing sums up everything hatable about cable news and politics and possibly America itself better than "Morning Joe," MSNBC's daily extended advertisement for Starbucks products and Joe Scarborough's odd belief that he is funny and charming.

The former Florida congressman and possibly attorney of some kind followed up his unremarkable political career by becoming a wildly successful moderate TV talker. ("Wildly successful" in terms of monetary compensation and publicity -- his show is watched by less than half the number of people who watch Fox's daily televised morning train wreck "Fox & Friends.") Joe's supposed to be some sort of maverick because he's not a doctrinaire Republican (anymore), but what he is is a totally doctrinaire member of the moderate Beltway political establishment.

So every morning he and Mika Brzezinski -- who either pretends to be a weak-willed flighty moron because she thinks it's necessary for her continued professional success as Joe's oft-belittled second banana/screwball love interest or who is actually tragically stupid -- perform the world's most self-satisfied kaffeeklatsch (along with Willie Geist, the former Tucker Carlson sidekick and a man born to play the guy who dies first in a war movie). Their rotating cast of regular guests includes some of the biggest superstars in political hackery, from Jon Meacham to Mark Halperin to Whitey Bulger-defender/plagiarist Mike Barnicle, but what people who are far too easily entertained love most is the "banter," that nonstop juvenile japery that I guess passes for wit when it's 6:30 a.m. and you're a tragically dull Washington, D.C., lifer. Joe can't stop cracking up at the word "sodomized" during a discussion of ... rape charges against Dominique Strauss-Kahn! Hysterical stuff.

(Let's pause here to remember Scarborough's long history of being a sanctimonious "decency" crusader, demanding tough FCC penalties for fleeting obscenities on television, which seems to have ended after he said "fuck you" on air one morning, at which point his show instituted a somewhat glitchy seven-second delay.)

It's Mr. Scarborough's jocular chauvinism that is the most immediately repellent thing about him and his program, but what may be even hackier is his utterly unself-aware devotion to the "civility" myth. The civility crowd consists of a bunch of rich elites who've convinced themselves that all of America's problems (their list of America's problems basically consists of the federal deficit and "incivility") would be solved if Republicans and Democrats sat down in a room and all agreed to basically become Rockefeller Republicans. This weird fantasy animates most of Scarborough's political analysis, which is especially rich coming from an actual former Republican congressman who rode into Congress not based on a nationwide yearning for civility but rather run-of-the-mill right-wing anger, and who eventually voted to impeach a president for nakedly partisan reasons.

As an official political media elite professional, Joe rails against the "media elite" in columns written for Politico, the D.C. newspaper and website that used to publish Scarborough alongside a liberal counterpart until the liberal counterpart left and wasn't replaced. These columns, amateurishly written and barely edited, show just how easy it is to become an important political power player if you have the requisite Bloombergian opinions and the correctly sized head for television.