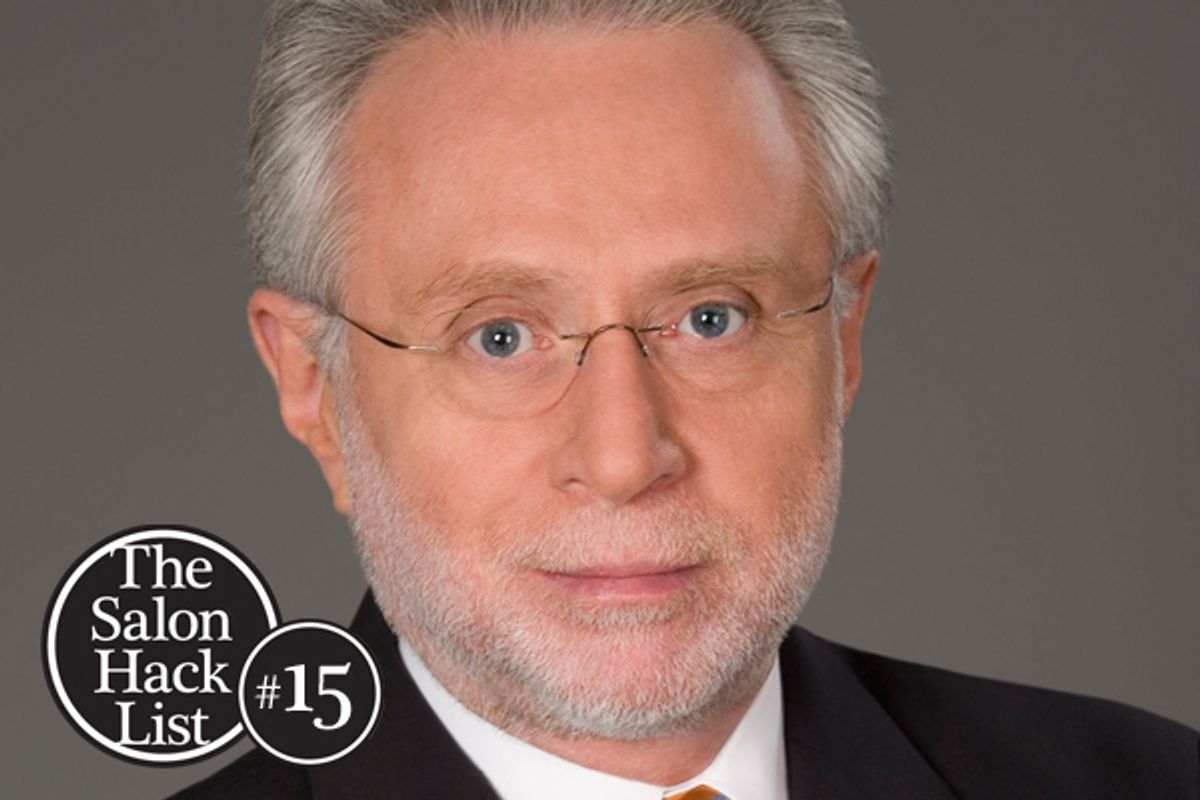 Wolf Blitzer might be the single dumbest person on television. You can tell, listening to his verbal diarrhea-style of breaking news narration, that he's paid to fill airtime with talk, not communicate ideas. The confirmation for me was his epically awful appearance on "Celebrity Jeopardy," in which he didn't just lose, he lost spectacularly. And "Celebrity Jeopardy" is not hard. And he kept buzzing in, even when he clearly had no clue. And the "Tonight Show" aired clips of Wolf being just as awful in rehearsal.

Not that a newsreader needs to be brilliant, or even to have a decent grasp of general information. But Blitzer's dimness is all-too-evident on "The Situation Room," CNN's seemingly 16-hour-long daytime showcase for its biggest video screen, which is gamely stood in front of by a gibbering goateed moron.

Jack Shafer demonstrated how once Wolf gets a cliché stuck in his head, he can't stop repeating it, like a baby learning English.

But the only thing worse than Blitzer's monosyllabic idiocy is his obvious sense of himself as a very serious and important person. When he does reveal an opinion -- and he's careful not to, because he works for opinion-allergic CNN, and also he's probably too dumb to have many opinions on the things he reads aloud -- it's the opinion of a longtime member in good standing of the very serious Washington establishment. So, for example, it is abhorrent to him that government secrets ended up in the hands of... the press. Wolf Blitzer cannot believe that journalists can just go read these secret government documents!

And let's not even get into his decades as a paid propagandist for the conservative Israel lobbying group AIPAC. (Well, OK, let's just link to another video of him being impossibly intellectually outmatched, in public.)

HACKIEST 2011 MOMENT:
His every interview is a master class in not managing to get anything interesting out of a subject. He often seems to be barely paying attention, as he showed when he completely muffed the famous "balloon boy" interview in 2009. But just go through his many, many Donald Trump interviews this recent campaign season for the absolute worst that cable news has to offer: A buffoon flattering a narcissistic clown with attention.
- - - - - - - - - -