The pretentious historian may have failed spectacularly at Newsweek, but he still won\'t go away 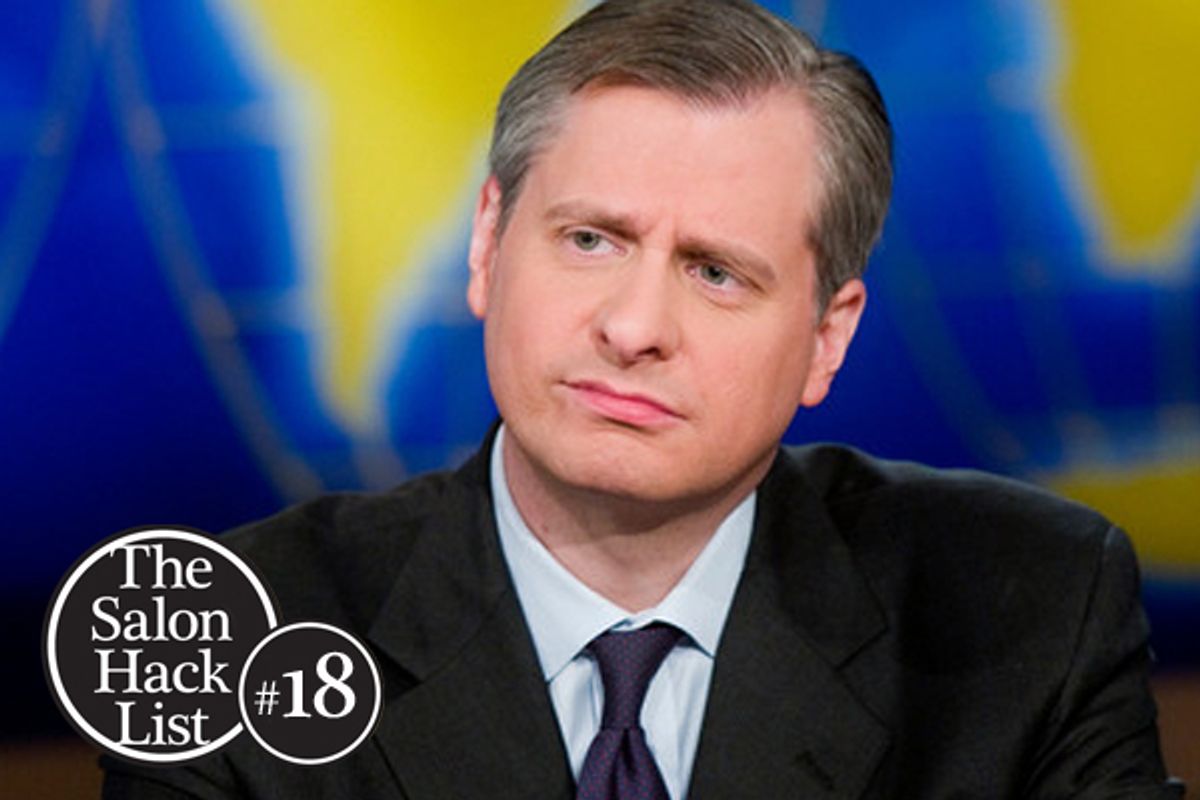 Charles Pierce tackled Meacham earlier this month, asking if the failed Newsweek editor is "the most insufferable human in Washington." I'd say he very well could be, except for when he's in New York lunching at Michael's with Roger Ailes.

Meacham, a famous public intellectual (with the six honorary degrees and the Pulitzer Prize-winning biography of Andrew Jackson that go along with that title), undertook a mission to save print journalism by redesigning Newsweek and telling everyone it was going to be more like The Economist, which meant "for smart people," and after losing $500,000 a week for a few years while not attracting tens of thousands of new, smart readers, the Kaplan Washington Post Co. finally gave up on owning Newsweek altogether, leaving Meacham out of work, which does give him a lot more time to appear on "Morning Joe."

So, journalism was not saved by regurgitations of the foreign policy conventional wisdom by Fareed Zakaria or "controversial" covers like "LINCOLN VS. DARWIN," and Economist readers were perfectly happy with The Economist, thank you.

Meacham was called "bizarrely incurious about the world" by one former staffer, and he does seem to care only about politics and how current politicians are like or not like politicians of the past. There are few political analysis clichés less edifying or useful than the old "an historian on how this candidate is just like Lincoln/Jackson/Adams/Henry Clay" bit. But for a political aficionado, he's remarkably dim on politics. This classic 2009 editor's letter arguing that Dick Cheney not only should but probably will run for president in 2012 is either link-bait trolling (very possible!) or evidence that Meacham is simply dumb.

He was the sort of magazine editor who kills a tough, critical introduction to an interview with Joe Scarborough when an unnamed "member of Scarborough's team" calls him to complain, and who was unwilling to take responsibility for a sexist cover package on Sarah Palin that annoyed even us Palin-hating leftists.

He is now a Time columnist, where he bangs out 400 words weekly on how Occupy Wall Street reminded us of something to do with William Jennings Bryan and "What Jane Austen Could Teach Washington." All of this is in the "Time Ideas" section, natch.

HACKIEST 2011 MOMENT:
His stirring defense, on "Morning Joe," of President George W. Bush against the entirely factually accurate charge that he lied in order to justify launching a war of choice in Iraq: “To say someone lied adds a corrosive element to the public dialogue that we just don’t need,” Meacham said. Oh, heaven forfend. However will the Republic survive people claiming a president lied? I mean, it's entirely possible that Bush launched a preemptive war based on cooked intelligence merely because he was moron surrounded by craven ideologues, which would I guess count as honest intentions.
- - - - - - - - - -