Don't count out the star or the franchise! The latest "Mission: Impossible" is a terrific holiday surprise 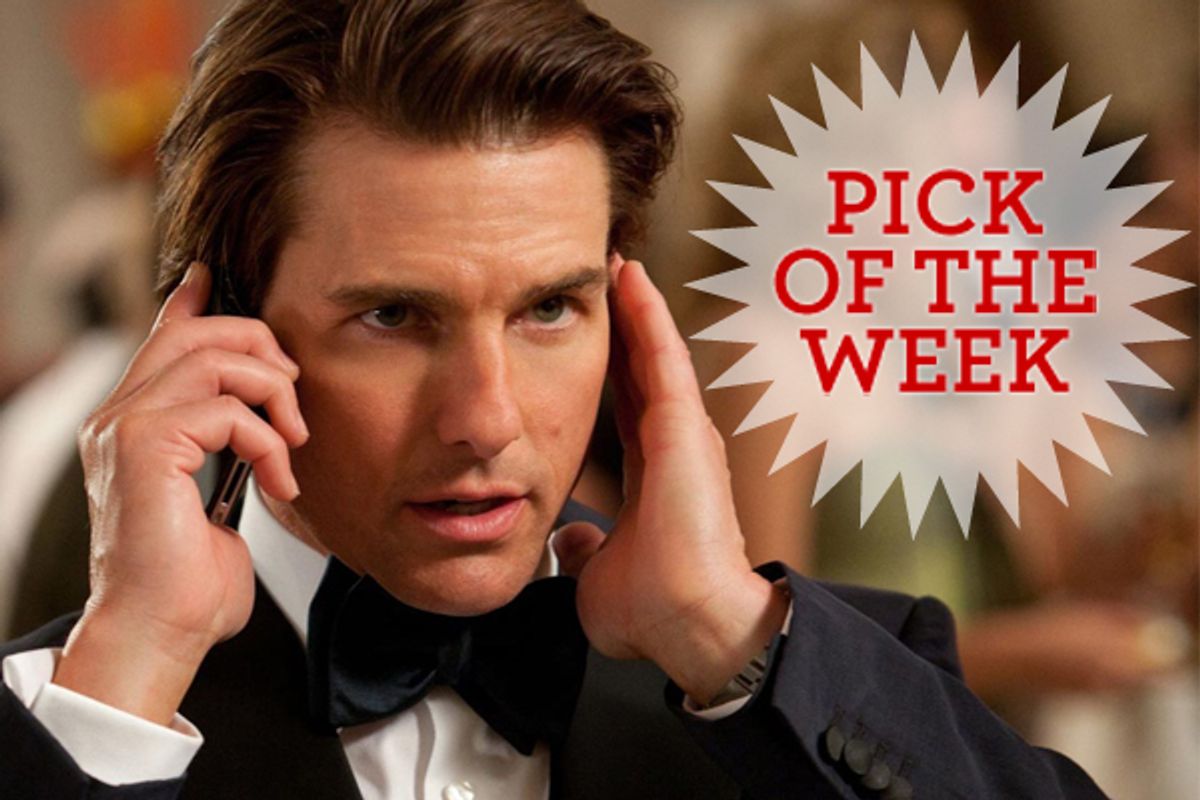 Take an aging star often viewed as a weirdo, a director who's never made a live-action film and the fourth installment of a 15-year-old movie franchise whose roots go back to 1960s television. What do you get? Well, it certainly could have been a total disaster, or an awkward nostalgia exercise, but instead "Mission: Impossible -- Ghost Protocol" is something even more unlikely: the most exciting action flick of the year, by a huge margin. Director Brad Bird brings all the wit, style and imagination of his animated films ("Ratatouille," "The Incredibles" and "The Iron Giant") to this slick secret-agent techno-fantasy. As for 49-year-old Tom Cruise, he's surely ready for a comeback after weathering the worst publicity of his celebrity career. He's back in his comfort zone here as renegade super-spy Ethan Hunt, who is exactly the kind of charismatic, overamped control freak we all believe (rightly or wrongly) that Cruise is too.

I'm not going to claim any degree of redeeming social value or trenchant political critique in "Mission: Impossible -- Ghost Protocol." It reflects a 21st-century climate of profound paranoia, high-tech espionage and renewed superpower tension between Russia and the United States, and that's all accurate enough. But Cruise, as the executive producer who controls this franchise, is crafty enough to avoid anything that smacks of ideology; the bad guy here isn't an Arab jihadi or a Moscow crime lord or a deranged American general or anything like that. Indeed, he's almost a standard-issue Bond-style supervillain: Hendricks, aka Cobalt (Michael Nyqvist, of the Swedish "Dragon Tattoo" trilogy), is a Scandinavian scientist gone nutso, who has decided that the only way to save civilization is to erase it with nuclear war and start over again. (I find myself strangely willing to entertain this argument, on the intellectual plane -- but the surgery required does seem radical.)

As the story begins, Cruise's Agent Hunt is out of the picture, moldering in a Russian prison on unknown charges. (Remember, any IMF agent who gets caught is disavowed by the U.S. government: "Who, him? No idea; total bad apple. Go ahead and lock him up.") Another team of agents, headed by newcomer Jane Carter (Paula Patton) and Anglo tech-geek and comic relief Benjy Dunn (Simon Pegg), run a mission that goes badly wrong in Budapest, thanks to an ice-blond French assassin (Léa Seydoux). Then they're sent to Russia to spring Hunt from prison, in the first of several terrific action set pieces, whereupon they pick up their next assignment, a self-destructing video message (of course) in a decrepit Soviet-era phone booth (of course). It's a simple mission: Break into a high-security archive inside the Kremlin and extract some important records before Cobalt gets them.

I shouldn't give away much more, except to say that however ingenious and delightful the IMF's plots and schemes are in this part of the movie, Cobalt is a step ahead of them the whole time. He sabotages their Kremlin break-in in spectacular fashion, not merely staging a headline-grabbing terrorist attack but making it bear the fingerprints of Ethan and friends and pushing the Russians and Americans right to the brink of war. This initiates "Ghost Protocol," as Tom Wilkinson helpfully explains during a brief appearance as "the Secretary," a shadowy U.S. government official in charge of the superspooks. Instead of pretending to be unauthorized, now the IMF team really is unauthorized. They're supposed to stop Cobalt from blowing up the world, but without any government support or sanction or information, covert or otherwise.

Bird's direction has such brio, and Cruise's performance as the unkempt, long-haired version of Ethan is so relaxed and charming, that even when "Ghost Protocol" resorts to empty showmanship it feels like good fun rather than pure pandering. (The impressive cinematography, much of it in huge-format IMAX, is by Robert Elswit.) Oh, I could explain how and why Ethan winds up climbing the outside of the Burj Khalifa in Dubai, currently the world's tallest building, using only magnetic "gecko gloves" that don't quite work as well as advertised. But does it really matter? It's a dazzling sequence with a smashing conclusion, that left the audience of cynical Manhattanites, at the preview screening I attended, first breathless and then cheering. (Cruise is such a madman that much of what we see in the film is really him stuck to the windows of the 2,700-foot skyscraper, although I'm not saying that stunt work and digital trickery aren't also involved.)

First of all, Hunt, Carter and Dunn -- joined by Jeremy Renner as Brandt, a CIA analyst with a troubled past -- try to run a complicated sting on Cobalt, who is meeting the French killer-babe assassin in Dubai to haggle over stolen Russian nuclear codes he needs to launch his yearned-for Armageddon. Then there's a pulse-pounding chase, on foot and by sports car, through a zero-visibility sandstorm. And then -- what the hell? -- the tour of nefarious night spots of the developing world moves on to Mumbai, where a lecherous Indian tycoon (Anil Kapoor) hosts a lavish party, Renner's character dons magnetic chain-mail underwear, and Cobalt hopes to use a second-string telecom satellite to launch a Russian nuclear strike on San Francisco. (I wouldn't call Josh Appelbaum and André Nemec's screenplay profound drama, but it conceals its twists artfully.)

My only questions about Brad Bird as a director are: 1) Why the hell has he only made three movies in 12 years; and 2) If Tom Cruise saw that he could do this, why didn't anybody else? Given Bird's excellent animated features, you'd expect him to be adept with humor, character byplay and rapid-fire storytelling, and you'd be right. (He does especially well using Pegg's character as the foil who continually punctures the hardass atmosphere.) But this movie has not just one or two but four or five of the most coherent and exciting action sequences in recent history, culminating with a beautifully choreographed final face-off between Cobalt and Ethan in a vertical Mumbai parking garage. Looking back at the "Mission: Impossible" franchise, each of the films has had a strong directorial signature, beginning with Brian De Palma's 1999 original and continuing with subsequent entries by John Woo and J.J. Abrams. Whether "Ghost Protocol" is the best in that expensive series of helicopter shots and exploding speedboats is up for debate, naturally, but it's pretty doggone close. This is pure escapist cinema at its best, without morality or apology or guilt.