Three myths about the detention bill 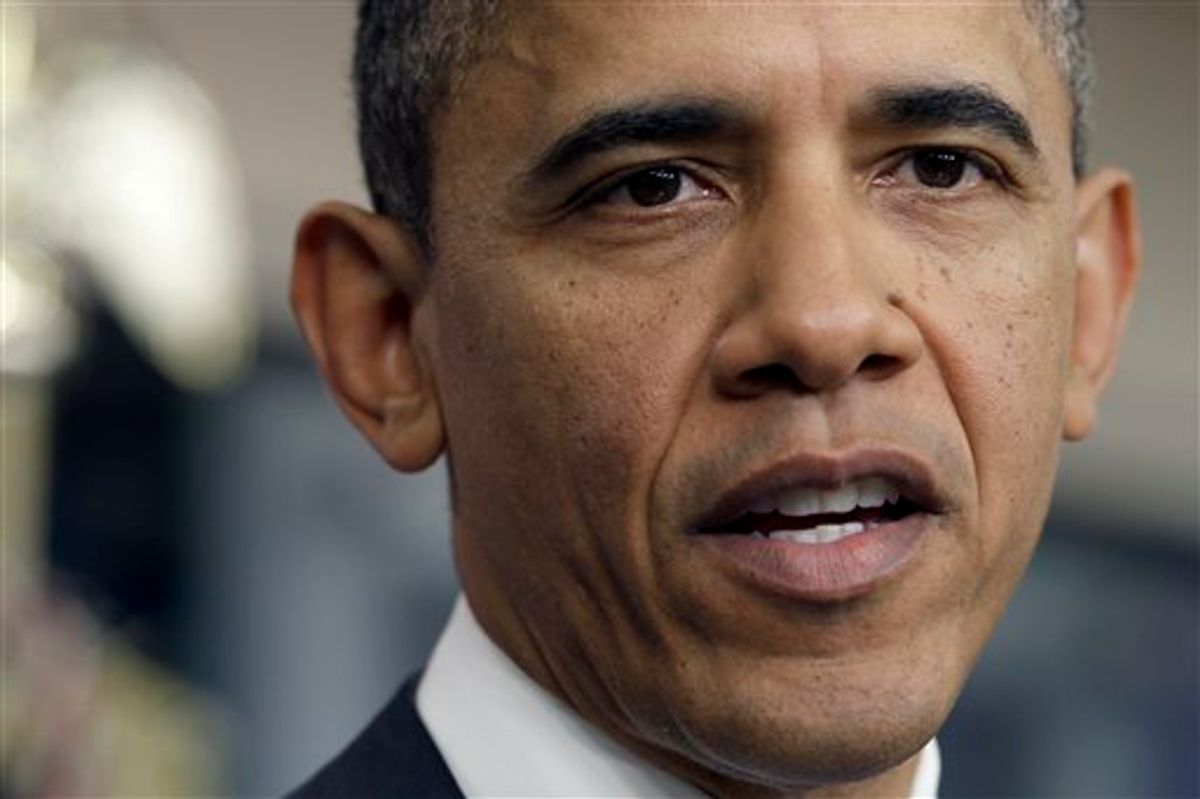 Condemnation of President Obama is intense, and growing, as a result of his announced intent to sign into law the indefinite detention bill embedded in the 2012 National Defense Authorization Act (NDAA). These denunciations come not only from the nation's leading civil liberties and human rights groups, but also from the pro-Obama New York Times Editorial Page, which today has a scathing Editorial describing Obama's stance as "a complete political cave-in, one that reinforces the impression of a fumbling presidency" and lamenting that "the bill has so many other objectionable aspects that we can’t go into them all," as well as from vocal Obama supporters such as Andrew Sullivan, who wrote yesterday that this episode is "another sign that his campaign pledge to be vigilant about civil liberties in the war on terror was a lie." In damage control mode, White-House-allied groups are now trying to ride to the rescue with attacks on the ACLU and dismissive belittling of the bill's dangers.

For that reason, it is very worthwhile to briefly examine -- and debunk -- the three principal myths being spread by supporters of this bill, and to do so very simply: by citing the relevant provisions of the bill, as well as the relevant passages of the original 2001 Authorization to Use Military Force (AUMF), so that everyone can judge for themselves what this bill actually includes (this is all above and beyond the evidence I assembled in writing about this bill yesterday):

Myth # 1: This bill does not codify indefinite detention

Section 1021 of the NDAA governs, as its title says, "Authority of the Armed Forces to Detain Covered Persons Pursuant to the AUMF."  The first provision -- section (a) -- explicitly "affirms that the authority of the President" under the AUMF  "includes the authority for the Armed Forces of the United States to detain covered persons." The next section, (b), defines "covered persons" -- i.e., those who can be detained by the U.S. military -- as "a person who was a part of or substantially supported al-Qaeda, the Taliban, or associated forces that are engaged in hostilities against the United States or its coalition partners." With regard to those "covered individuals," this is the power vested in the President by the next section, (c):

It simply cannot be any clearer within the confines of the English language that this bill codifies the power of indefinite detention. It expressly empowers the President -- with regard to anyone accused of the acts in section (b) -- to detain them "without trial until the end of the hostilities." That is the very definition of "indefinite detention," and the statute could not be clearer that it vests this power. Anyone claiming this bill does not codify indefinite detention should be forced to explain how they can claim that in light of this crystal clear provision.

It is true, as I've pointed out repeatedly, that both the Bush and Obama administrations have argued that the 2001 AUMF implicitly (i.e., silently) already vests the power of indefinite detention in the President, and post-9/11 deferential courts have largely accepted that view (just as the Bush DOJ argued that the 2001 AUMF implicitly (i.e., silently) allowed them to eavesdrop on Americans without the warrants required by law). That's why the NDAA can state that nothing is intended to expand the 2001 AUMF while achieving exactly that: because the Executive and judicial interpretation being given to the 20o1 AUMF is already so much broader than its language provides.

But this is the first time this power of indefinite detention is being expressly codified by statute (there's not a word about detention powers in the 2001 AUMF). Indeed, as the ACLU and HRW both pointed out, it's the first time such powers are being codified in a statute since the McCarthy era Internal Security Act of 1950, about which I wrote yesterday.

Myth #2: The bill does not expand the scope of the War on Terror as defined by the 2001 AUMF

This myth is very easily dispensed with. The scope of the war as defined by the original 2001 AUMF was, at least relative to this new bill, quite specific and narrow. Here's the full extent of the power the original AUMF granted:

Under the clear language of the 2001 AUMF, the President's authorization to use force was explicitly confined to those who (a) helped perpetrate the 9/11 attack or (b) harbored the perpetrators. That's it. Now look at how much broader the NDAA is with regard to who can be targeted:

Section (1) is basically a re-statement of the 2001 AUMF. But Section (2) is a brand new addition. It allows the President to target not only those who helped perpetrate the 9/11 attacks or those who harbored them, but also: anyone who "substantially supports" such groups and/or "associated forces." Those are extremely vague terms subject to wild and obvious levels of abuse (see what Law Professor Jonathan Hafetz told me in an interview last week about the dangers of those terms). This is a substantial statutory escalation of the War on Terror and the President's powers under it, and it occurs more than ten years after 9/11, with Osama bin Laden dead, and with the U.S. Government boasting that virtually all Al Qaeda leaders have been eliminated and the original organization (the one accused of perpetrating 9/11 attack) rendered inoperable.

It is true that both the Bush and Obama administration have long been arguing that the original AUMF should be broadly "interpreted" so as to authorize force against this much larger scope of individuals, despite the complete absence of such language in that original AUMF. That's how the Obama administration justifies its ongoing bombing of Yemen and Somalia and its killing of people based on the claim that they support groups that did not even exist at the time of 9/11 -- i.e., they argue: these new post-9/11 groups we're targeting are "associated forces" of Al Qaeda and the individuals we're killing "substantially support" those groups. But this is the first time that Congress has codified that wildly expanded definition of the Enemy in the War on Terror. And all anyone has to do to see that is compare the old AUMF with the new one in the NDAA.

Myth #3: U.S. citizens are exempted from this new bill

This is simply false, at least when expressed so definitively and without caveats. The bill is purposely muddled on this issue which is what is enabling the falsehood.

There are two separate indefinite military detention provisions in this bill. The first, Section 1021, authorizes indefinite detention for the broad definition of "covered persons" discussed above in the prior point. And that section does provide that "Nothing in this section shall be construed to affect existing law or authorities relating to the detention of United States citizens, lawful resident aliens of the United States, or any other persons who are captured or arrested in the United States." So that section contains a disclaimer regarding an intention to expand detention powers for U.S. citizens, but does so only for the powers vested by that specific section. More important, the exclusion appears to extend only to U.S. citizens "captured or arrested in the United States" -- meaning that the powers of indefinite detention vested by that section apply to U.S. citizens captured anywhere abroad (there is some grammatical vagueness on this point, but at the very least, there is a viable argument that the detention power in this section applies to U.S. citizens captured abroad).

But the next section, Section 1022, is a different story. That section specifically deals with a smaller category of people than the broad group covered by 1021: namely, anyone whom the President determines is "a member of, or part of, al-Qaeda or an associated force" and "participated in the course of planning or carrying out an attack or attempted attack against the United States or its coalition partners." For those persons, section (a) not only authorizes, but requires (absent a Presidential waiver), that they be held "in military custody pending disposition under the law of war." The section title is "Military Custody for Foreign Al Qaeda Terrorists," but the definition of who it covers does not exclude U.S. citizens or include any requirement of foreignness.

That section -- 1022 -- does not contain the broad disclaimer regarding U.S. citizens that 1021 contains. Instead, it simply says that the requirement of military detention does not apply to U.S. citizens, but it does not exclude U.S. citizens from the authority, the option, to hold them in military custody. Here is what it says:

The most important point on this issue is the same as underscored in the prior two points: the "compromise" reached by  Congress includes language preserving the status quo. That's because the Obama administration already argues that the original 2001 AUMF authorizes them to act against U.S. citizens (obviously, if they believe they have the power to target U.S. citizens for assassination, then they believe they have the power to detain U.S. citizens as enemy combatants). The proof that this bill does not expressly exempt U.S. citizens or those captured on U.S. soil is that amendments offered by Sen. Feinstein providing expressly for those exemptions were rejected. The "compromise" was to preserve the status quo by including the provision that the bill is not intended to alter it with regard to American citizens, but that's because proponents of broad detention powers are confident that the status quo already permits such detention.

In sum, there is simply no question that this bill codifies indefinite detention without trial (Myth 1). There is no question that it significantly expands the statutory definitions of the War on Terror and those who can be targeted as part of it (Myth 2). The issue of application to U.S. citizens (Myth 3) is purposely muddled -- that's why Feinstein's amendments were rejected -- and there is consequently no doubt this bill can and will be used by the U.S. Government (under this President or a future one)  to bolster its argument that it is empowered to indefinitely detain even U.S. citizens without a trial (NYT Editorial: "The legislation could also give future presidents the authority to throw American citizens into prison for life without charges or a trial"; Sen. Bernie Sanders: "This bill also contains misguided provisions that in the name of fighting terrorism essentially authorize the indefinite imprisonment of American citizens without charges").

Even if it were true that this bill changes nothing when compared to how the Executive Branch has been interpreting and exercising the powers of the old AUMF, there are serious dangers and harms from having Congress -- with bipartisan sponsors, a Democratic Senate and a GOP House -- put its institutional, statutory weight behind powers previously claimed and seized by the President alone. That codification entrenches these powers. As the New York Times Editorial today put it: the bill contains "terrible new measures that will make indefinite detention and military trials a permanent part of American law."

What's particularly ironic (and revealing) about all of this is that former White House counsel Greg Craig assured The New Yorker's Jane Mayer back in February, 2009 that it's "hard to imagine Barack Obama as the first President of the United States to introduce a preventive-detention law." Four months later, President Obama proposed exactly such a law -- one that The New York Times described as "a departure from the way this country sees itself, as a place where people in the grip of the government either face criminal charges or walk free" -- and now he will sign such a scheme into law.

UPDATE: There's an interview with me in Harper's today regarding American justice and With Liberty and Justice for Some.