I knew Christopher Hitchens better than you

Every writer who had a drink with Hitch has now told his story. But even Rushdie and Amis didn't know him like this 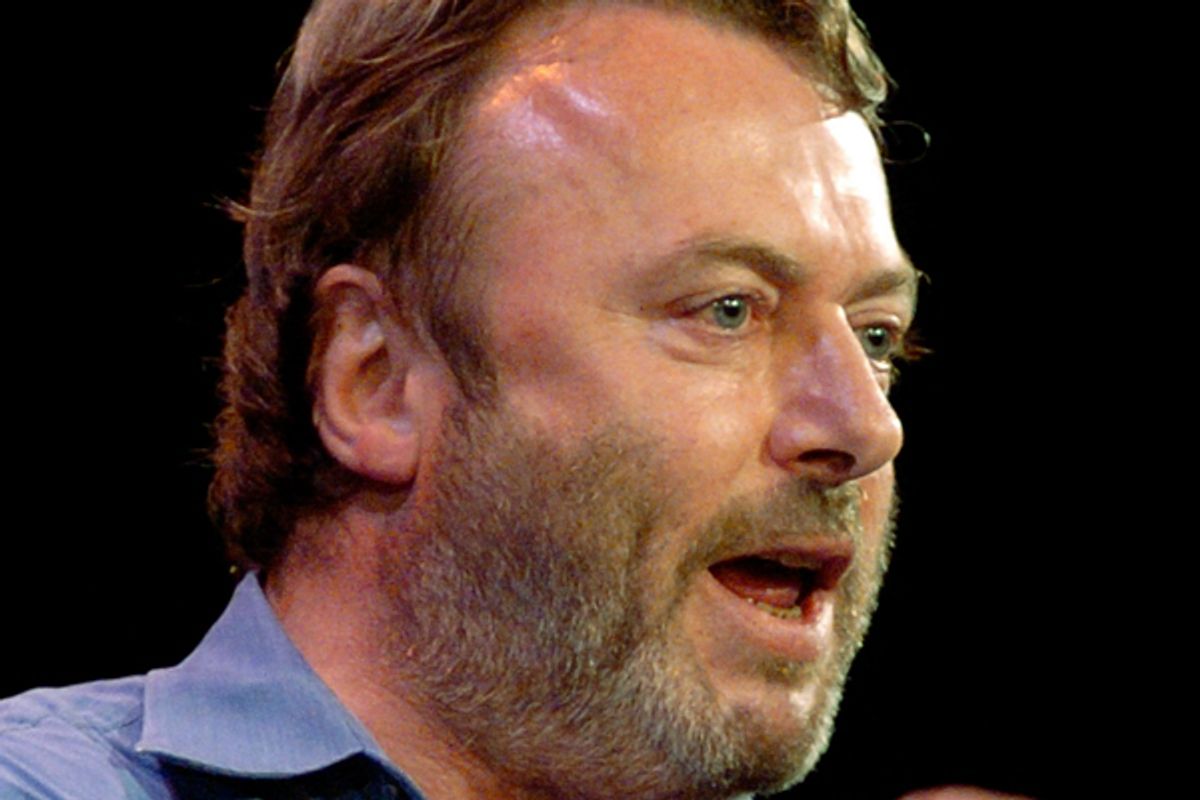 Christopher Hitchens and I were friends for 40 years, plus another five when we were enemies. He took ideas so seriously that if he disagreed with you on a matter that he deemed important, he’d literally throw you in a ditch. It was 1972, the height of our mutual virility. He and I went to a pub to celebrate his most recent intellectual victory over the establishment press. I intimated that sometimes women could be funny on purpose. Even back then, the thought enraged him. Hitchens threw a drink in my face, pressed a lit cigarette into my neck, and hit me over the head with a barstool. The next thing I knew, it was two days later and I was lying hogtied and naked beside the M5. Hitch had already severely damaged my reputation in a vicious essay in the Guardian. But that’s how he operated, and that’s why we loved him.

University, as you know, is the only time in one’s life when anything really worthwhile happens. I met Hitch there. The first time I saw him, he had a bird on each arm and a woman by his side. She beamed as he read aloud passages from "Homage to Catalonia." He looked up.

“Are you in favor of the war in Vietnam?”

Hitch put down the book and took a swig of cheap Scotch.

“Good,” he said. “Because I refuse to fraternize with men who are afraid to be intellectual heroes.”

In the annals of history, only Orwell, Voltaire and maybe a half-dozen other guys could match’s Hitch ideological bravery and breadth of political knowledge. In 1977, after I’d returned to his graces by aiding him in a plot to assassinate Henry Kissinger’s character, Hitch and I visited Borges’ library in Buenos Aires. At the time, Hitch was working for the KGB while pretending to work for the BBC, and I was working for the Mossad while pretending to work for Burger King. But our many identities were merely covers for our lives as political writers at low-paying magazines.

Borges invited Hitch and me into his home, fed us tea and empanadas, and launched into a seamlessly brilliant discourse on surrealism in Latin American history. He talked for 30 minutes without stopping, during which time Hitch smoked six-dozen cigarettes. When Borges finished, Hitchens paused, spat in his ashcan, and said,

“Of course, you know, you’re wrong about everything.”

He then proceeded to refute Borges, point for point, until he reduced the blind scribe of Buenos Aires to tears.

No one loved ideas more than Hitch.

Much ink has been spilled, of course, about the legendary friendships Christopher forged with other writers throughout his life. For a time in the 1980s, he, Martin Amis, Salman Rushdie and I lived together in London. Hitchens rented us a six-story flat so we could swap partners more easily. Many was the time we passed the bottle until dawn, bemoaning Thatcher’s England, Reagan’s America, and also some stuff about the Middle East. Sometimes Hitchens would bring over a dissident writer who was fleeing oppression in his native country, and we’d all make fun of Mother Teresa and Princess Diana, then remove our pants to compare our manhoods. We were so middle-aged and foolish then, so committed to the struggle.

Hitchens spoke out against war, and also for war. In a span of five years, he bore witness to the fall of the Berlin Wall, the explosion of the Eiffel Tower, and the construction of the new holographic Eiffel Tower. He had acid in his pocket, acid in his pen and acid in his veins. Then Darkness fell, on Sept. 11, 2001. We’d all moved to America and gotten totally rich.

Hitchens changed that day. For months, he’d wander the streets at night, looking to drunkenly berate someone who disagreed with him about the evils of Islamofascism. Occasionally he’d attempt to strangle young journalists, who admired him unquestioningly, with their own neckties. But he was right. He was always right. Even when he was wrong.

The night they killed Osama bin Laden, he showed up at my apartment, drunk but lucid, quoting T.S. Eliot, Longfellow and, of course, himself. We stayed up watching CNN, which was actually pretty boring. In the morning, over a breakfast of corn flakes and whiskey, I said, “Well, I guess that’s the end of Islamofascism. Good job!”

Hitchens went into my kitchen, took a cutting board off the counter, and threw it into my forehead, drawing blood.

“Don’t be an imbecile,” he said. “The struggle never ends. Also, you must remember that there is no God.”

I needed four stitches that day. Hitch put them in himself, with his teeth. What a friend he was.