A exciting animated adventure tries to update the classic tale of the Belgian boy reporter. Should Americans care? 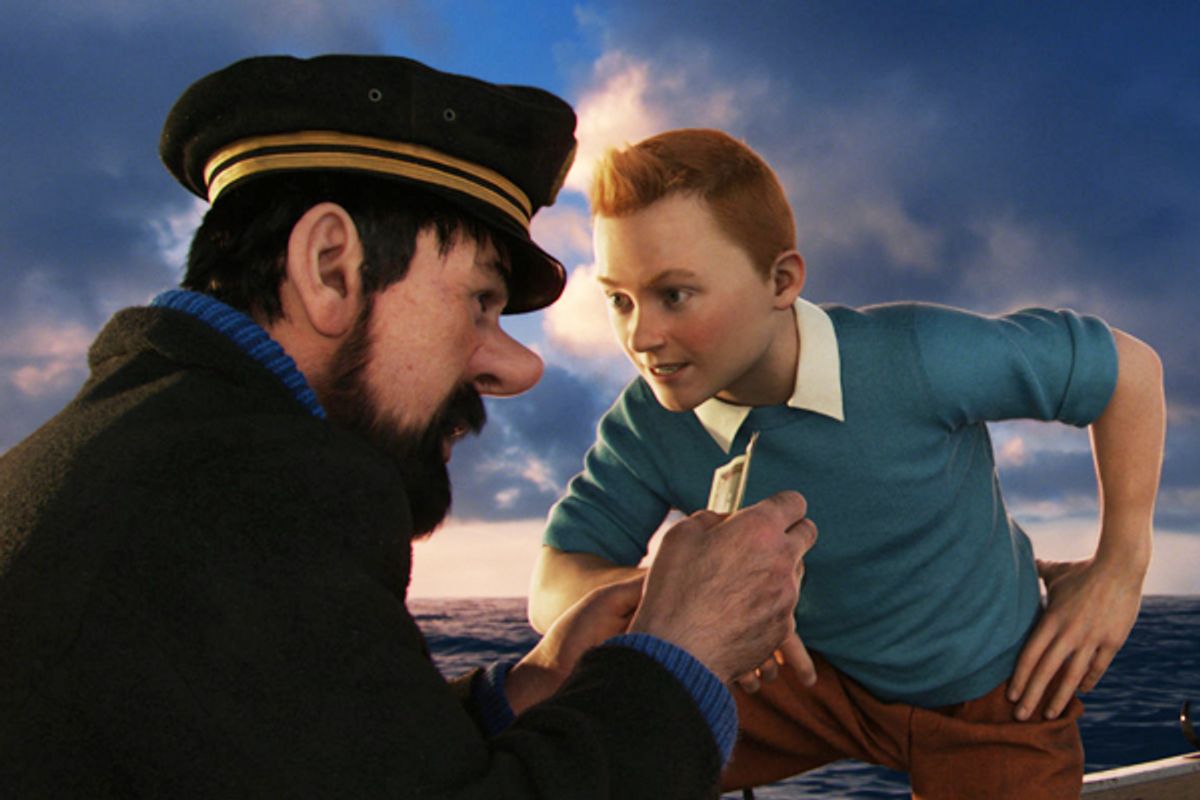 A still from "The Adventures of Tintin"
--

Frankly, the life and work of Belgian comics artist and writer Georges Remi, better known to the world as Hergé, is much more interesting than Steven Spielberg's "The Adventures of Tintin," an expensive, ambitious and relentless animated film that struggles to drag Hergé's aesthetics and worldview into the 21st century. (It's also, bizarrely, the first of two Spielberg films to open this Christmas, just before "War Horse.") I'm not saying the movie isn't worth seeing for Tintin fans, animation buffs and other interested parties; far from it. A collaboration between Spielberg and Peter Jackson (who serves as producer) with a reported $130 million budget, this first installment of a proposed Tintin trilogy breaks new ground in 3-D performance capture animation, in an effort to split the difference between live-action filmmaking and Hergé's clean and colorful "ligne claire" cartooning. Although I personally still find the rubber-faced, pseudo-human figures produced by this technique unsettling, the work done by Spielberg and Jackson's animation teams here is exquisite.

As you'd expect, Spielberg's characterization is lively, with Jamie Bell voicing the intrepid, if almost personality-free boy reporter Tintin (who never actually seems to write anything) and Andy Serkis, aka The Man With No Face, as his alcoholic sidekick Captain Haddock. Simon Pegg and Nick Frost are perfectly cast as the comic-relief duo of Thomson and Thompson, a pair of inept but indistinguishable bowler-hatted detectives. (Sadly, Prof. Cuthbert Calculus, along with his hearing impediment and his ludicrous inventions, do not appear in this chapter.) Some of the numerous action set-pieces are absolutely spectacular, such as a memorable chase through the streets of a Middle Eastern port city (pre-modern Dubai or Bahrain, perhaps) involving a motorcycle, a grenade launcher, a jeep, a rushing canal, a falcon, a tank, a moving hotel and a clothesline.

That scene, mind you, does not appear in any of the three Tintin graphic novels from the 1940s -- "The Crab With the Golden Claws," "The Secret of the Unicorn" and "Red Rackham's Treasure" -- from which screenwriters Steven Moffat, Edgar Wright and Joe Cornish (along with uncredited collaborators, one suspects) have cobbled together this film's story. Perhaps understandably, Spielberg has sought to translate the naïve, idealistic and distinctively European colonial-era worldview of Hergé's hero into a more familiar idiom -- pretty much that of Indiana Jones. How well that works for viewers around the world is very much an open question, but it's certainly no accident that "The Adventures of Tintin" opened more than a month ago in Europe, and is only now reaching American theaters. Hergé's books are enormous cultural landmarks both on the Continent and in Britain, but have never been more than a marginal, Europhile eccentricity in the United States. If the movie succeeds here, it'll be in spite of its source material, not because of it.

Charles de Gaulle supposedly once said that Tintin was his only rival for supremacy in the French-speaking world, and the more you know about the history of those two, the funnier that is. There's considerable debate over how to interpret the Tintin books in social and political terms, but let's start with the fact that Hergé began as an illustrator for Belgian Boy Scout manuals and a right-wing Catholic magazine, and those origins are clearly encoded in the fearless boy reporter and his globetrotting adventures. If Hergé wasn't quite a Nazi collaborator during the occupation of Belgium, he certainly wasn't a resister either. All three of the books incorporated into Spielberg's film were deliberately apolitical works originally published in a pro-German newspaper. Early Tintin books contain both grotesque racist stereotypes and disturbing anti-Semitic caricatures, which Hergé later disavowed and/or redrew. In the original version of "Tintin in the Congo," we see our hero at the blackboard, delivering a lecture to a class of benighted natives: "My dear friends, today I'm going to talk to you about your country: Belgium!" (I've never read Hergé's overtly propagandistic "Tintin in the Land of the Soviets," in which the boy reporter discovers Lenin and Trotsky's secret cave of stolen treasure, but that one turned out to be ahead of its time.)

What point am I making about Spielberg's movie? I don't know, maybe none, except that I think the original Tintin adventures, in all their Hardy Boys Go to Fascist Europe sinister innocence, strongly resist contemporary translation. For good or ill, they remain defiantly themselves. Furthermore, as impressive as the Spielberg-Jackson motion-capture technology is, it's only a vague approximation of the blinding color palette and richly detailed cartoon panels of Hergé, who pioneered the graphic novel before the term was invented and became a major influence on Roy Lichtenstein and Andy Warhol. (Warhol said he thought Hergé was as important as Walt Disney.)

"The Adventures of Tintin" takes us from an unnamed European capital -- it isn't quite Brussels and isn't quite London -- to rip-roaring shootouts on the high seas and a small-plane crash in the sands of the Arabian peninsula, as Tintin and Captain Haddock strive to beat a sinister collector named Sakharine (voiced by Daniel Craig) to a treasure hidden by Haddock's 17th-century ancestor after his defeat of the legendary pirate Red Rackham. Taken on its own terms, the movie offers plenty of excitement -- but the thing is, I'm not quite sure about those terms. Serkis gives a terrific performance, but do we really need a disturbing, quasi-naturalistic portrait of Haddock as a sweaty, red-faced loser battling a lifelong addiction? (In the books, his drinking is strictly played for laughs, "Thin Man" style, and I recognize that you can't and shouldn't get away with that today.)

I'm a lifelong fan of Hergé's work (within certain obvious limits) and I've now seen the movie twice, the second time in the company of a seven-year-old who's inherited my Tintin collection. We found it alternately thrilling, baffling and eventually exhausting; it's as if Spielberg gets frustrated with his inability to capture Tintin's true spirit, or worried that viewers are getting bored. He keeps ramping up the violence, speed and pace of the action sequences, which are plenty of fun at first but conclude with a chaotic dockland duel between Haddock and Sakharine, using giant cranes, which my son found terrifying and incomprehensible. (Again, it's an invention not found in Hergé.) I recognize that "The Adventures of Tintin" is a labor of love, a work by two important filmmakers in tribute to a unique and peculiar artist. That doesn't mean it was worth doing, in the end, or that it rises above the level of intriguing technical curiosity.