John Ford meets Kubrick -- with a side of \"Black Beauty\" -- in the gorgeous, overwrought \"War Horse\" 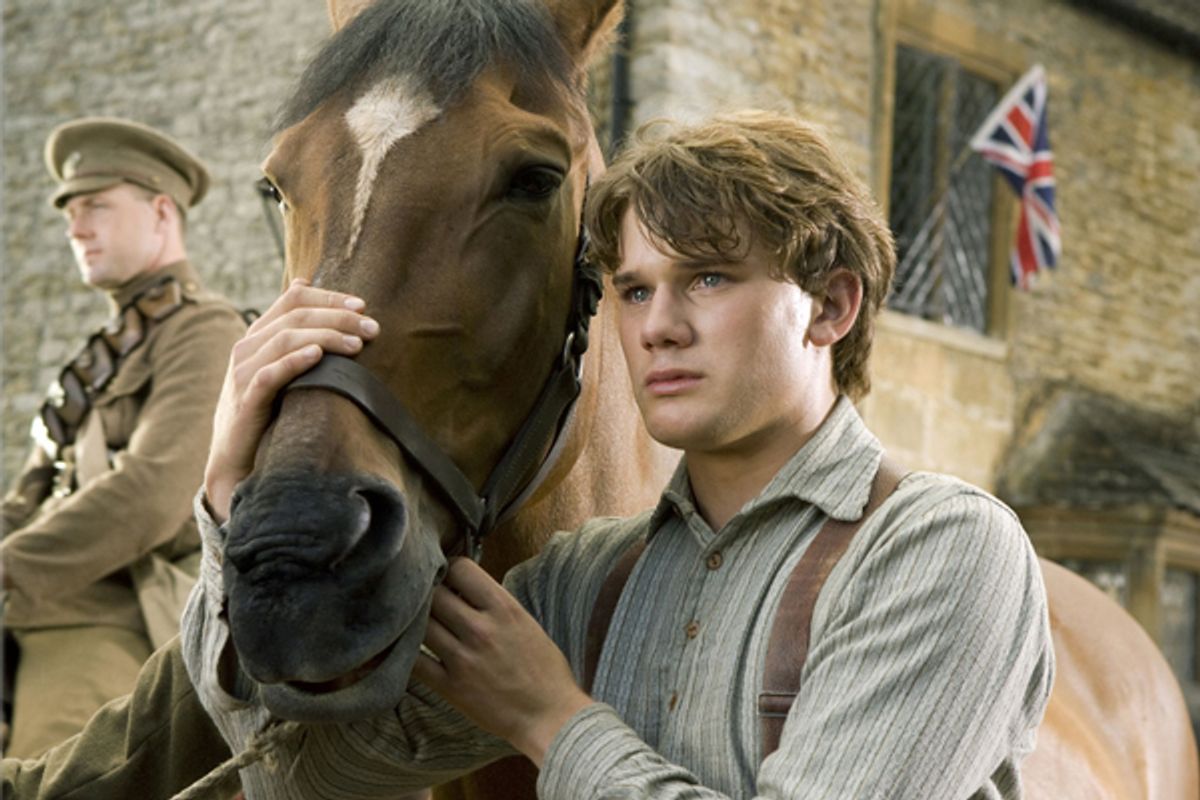 It's difficult to say who Steven Spielberg's "War Horse" was made for -- I suppose the most plausible and most honorable answer is that he made it for himself. This two-and-a-half-hour Great War saga with an equine hero is partly John Ford-style British Isles claptrap and partly a grueling tale of man's inhumanity to man (and also horse). It's likely to seem too dark for family audiences -- I certainly would not suggest bringing children younger than 10 or 11 -- and too treacly for many grown-ups. "War Horse" is certainly a movie for Spielberg's fans, for those who are enraptured by the blend of childhood yearning and adult grief that characterizes his mature work, and also by his film-school-on-steroids effort to re-create the look, mood and feeling of bygone cinematic eras.

Of course, one could also offer a more cynical interpretation, and read this boy-meets-horse allegory as middle-of-the-road Oscar bait of the highest order, a picturesque period weeper designed to reduce 70-something, Beverly Hills-dwelling Academy voters to tears. Listen, I have gravely mixed feelings about Spielberg, but I'm not going there. I'm sure he still welcomes awards and good reviews and all that, but at this point in his career Spielberg is pursuing personal goals, and everything that's terrific and overly flat and tooth-rottingly sweet about "War Horse" reflects that. It's almost a great war movie in one direction, and almost a piece of irredeemable cheese in the other, and there you have it. Steven Spielberg, ladies and gentlemen -- the director of "Jaws" and "The Color Purple" and "Saving Private Ryan" and "Munich" and "The Adventures of Tintin" (which is competing with "War Horse" right now for the Christmas weekend box office) and a forthcoming biopic starring Daniel Day-Lewis as Abraham Lincoln. We aren't gonna change the guy now.

"War Horse" officially begins in the early 20th century in Devon, a rural county in southwestern England, where a drunken and obstinate tenant farmer named Ted Narracott (the terrific Scottish actor Peter Mullan) buys a beautiful thoroughbred at auction, largely to spite his flinty landlord (David Thewlis). But any resemblance to the real Britain circa 1910 is accidental; this part of "War Horse" is really set in the imaginary version of places like Devon as mythologized by Hollywood, notably in John Ford classics like "How Green Was My Valley" and "The Quiet Man." (I am aware that those movies are set in Wales and Ireland, respectively; those distinctions are lost on most American viewers, and in the cinematic context they don't much matter.)

Janusz Kaminski's photography of the storybook settings -- "War Horse" was shot entirely in England, both on location and in two different studios -- is predictably gorgeous, and depending on your taste the archetypal characters will either charm you to pieces or make your fillings pop out. In addition to Mullan's boozy dad, a Boer War veteran who refuses to talk about his past, and Thewlis' mustachioed, frock-coated Mr. Moneybags, we have Emily Watson as the nagging, loving Mum, perennially on her knees scrubbing things, and young Jeremy Irvine as Albert, their ambitious only son, who sees the handsome horse as a symbol of the family's brighter future. (Officially, the screenplay by Lee Hall and Richard Curtis is based on Michael Morpurgo's original 1982 novel, although it clearly borrows its narrative approach from Nick Stafford's Broadway show.)

It's Albert who temporarily saves the Narracott family from eviction by harnessing Joey -- that's the noble thoroughbred's name -- and training him to be a plow horse during a drenching rainstorm, and if that seems like an utterly ridiculous notion to anybody who knows anything about farming and horses, well, it's just that kind of story. It's not like the other stuff that happens in this section of "War Horse" is less comic and picturesque and improbable, not to mention (to my taste) vastly irritating. But war is coming in faraway Europe, and while everyone keeps insisting that the Hun will soon be driven out of Belgium and it'll all be over in no time, we know better. Despite Albert's heartfelt pleas, Joey is sold to Capt. Nicholls (Tom Hiddleston, who played Scott Fitzgerald in "Midnight in Paris" and Loki in "Thor"), a handsome cavalry officer who assures Albert, "man to man," that he'll take good care of Joey and bring him home if he possibly can.

This is the moment when "War Horse" makes an abrupt shift from one kind of old-fashioned movie to another, leaving behind "How Green Was My Quiet Darby O'Gill" and turning into "All Quiet on the Western Front" or even "Paths of Glory." It's also the moment when I should warn you that talking about the rest of the movie involves giving away certain plot developments -- and it's the moment when unprepared families who haven't read reviews like this one will find out that "War Horse" definitely isn't suitable for most young children. Nicholls is an admirable and likable character, an old-school English officer who believes in honor and duty and has no idea that the world order he represents is about to come crashing down. He won't be able to keep his promise to Albert because he isn't coming home himself, with or without Joey. When Nicholls and his cavalrymen realize that they're riding toward a line of German machine-gunners, it's one of the most terrifying sequences in all of Spielberg's oeuvre, and even more so because the director avoids any explicit bloodshed.

I suppose the sudden shift in mode and mood is precisely the point of "War Horse." Rural characters like Albert and Joey, seemingly locked into their lives in an unchanging Britain, are suddenly uprooted and thrown into a broiling chaos where survival is largely a matter of good luck. Joey goes from Nicholls to a pair of young German soldiers who try to desert, and then to a French farm where an ailing grandpa (Niels Arestrup) is trying to keep his treasured granddaughter (Celine Buckens) safe at a place and time when lovely teenage girls were at terrible risk. He is confiscated once again and thrust into service hauling artillery, a task few horses could stand for more than a month or two.

In a vivid, nightmarish sequence that unfortunately isn't a dream, Joey careens among the trenches, exploding shells and corpses (human and equine alike) of the German front lines, at one point coming face to face with a primitive tank, the animal power of old Europe facing a mechanized monster of the new one. In the film's moral and visual centerpiece, Joey gets entangled in barbed wire smack in the middle of No Man's Land, between the German and British front lines, and a couple of soldiers -- distracted from their task of murdering each other by the plight of an injured animal -- emerge from the trenches to see if they can rescue him. It's magnificently staged and powerfully affecting, and in true Spielberg fashion, it's all rather too much. Too much allegorical and symbolic weight, too much emotion projected onto a handsome animal who cannot in fact express it, and too much prefiguring of the miraculous reunion we all know is coming, but which (for better and for worse) cannot undo everything that has happened.