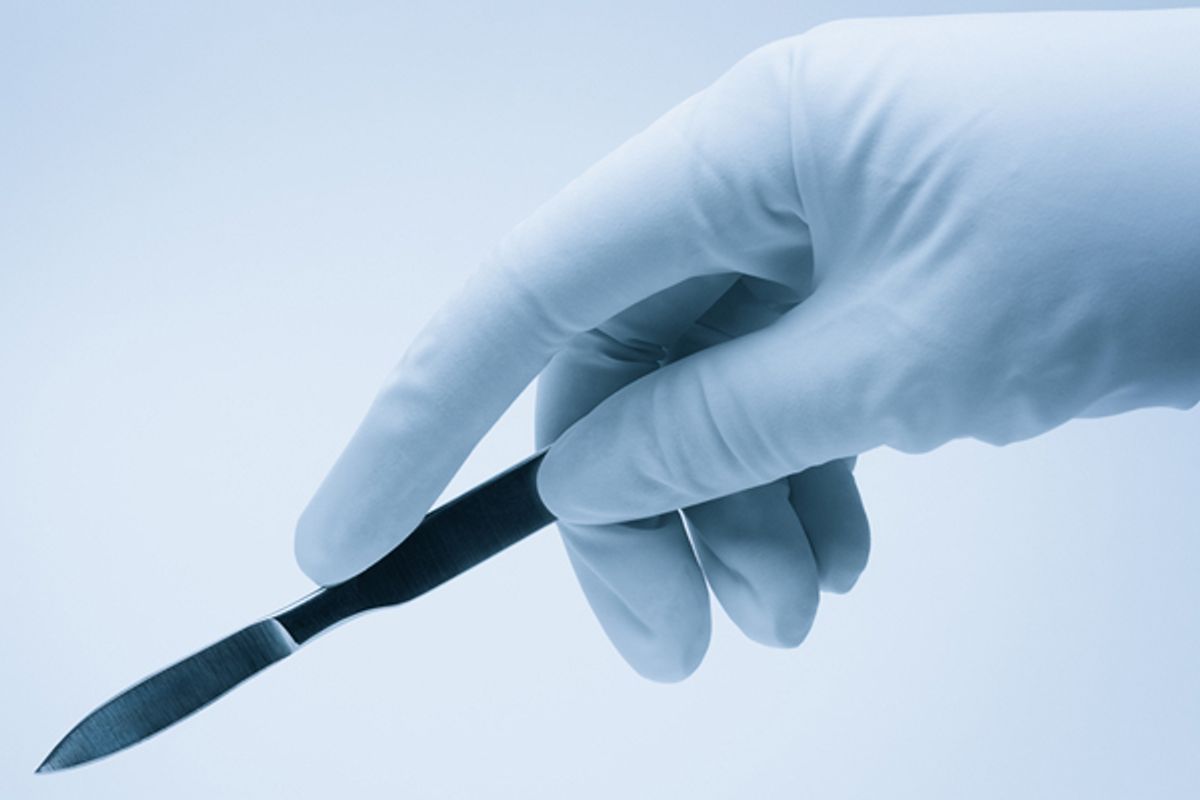 We stood together in the bedroom, he and I. It was a week after the operation, and it was time for the bandages to come off. He gently peeled off the first one, under my left breast, where the surgeon had gone in and excised a small tumor from my lung. He peeled off the second one, where the camera that had found the tumor had gone in. He peeled off the final one, where the drain had been. When he was finished, I turned to look at myself in the mirror, at the triangle of wounds around my chest, and started to cry. "I'm angry," he said. "I'm angry they did this to you." And so was I.

When you go in for surgery, your doctors will tell you not to eat after midnight. They'll tell you what kind of narcotics and ointments and stool softeners you will need afterward, and when you can eat solid food or lift heavy packages. What they probably won't mention is that you might feel surprisingly traumatized.

Before my first cancer surgery in 2010, when my doctors removed five centimeters from my scalp, several lymph nodes, and a patch of skin from my thigh, I was considerably more freaked out by the aggressive malignancy in my body than the prospect of going under the knife. Afterward, I wrestled in predictable ways with the pain of recuperation and the grief over my lost hair and flesh. Yet when I faced a second surgery a year later, I was shocked to realize that amid all the new health fears, I was terrified by the prospect of the procedure itself. The whole process, from the long, cold walk into the operating theater through the groggy feeling of waking up in post-op, filled me with anxiety. But it was the part in the middle – the knowledge that strange hands would be cutting into me and exploring my insides, taking little pieces of me, that seemed most harrowing. Why, I wondered, didn't any of my doctors mention anxiety and anger as a potential aftereffect? The spirometer they handed me when I left the hospital wasn't going to help with that.

A patient's fears about a condition that requires surgery and the physical aftershocks of recovery are difficult enough. Factor in the foggy, often unpredictable reactions to anesthesia, the intensity of the surgical experience, and the body's natural stress responses, and it's not exactly surprising that many of us will find ourselves shaken up. The Center for Integrative Medicine compares surgery's potential for trauma with that of assault, accidents and combat. A stunning one in five patients reports depression after heart surgery. It's so common that it's got its own name – cardiac depression. And the journal Primary Psychiatry notes that surgery can not only exacerbate preexisting conditions like anxiety disorders and bipolarism, it can bring on PTSD, especially when the surgery is for a traumatic event or the recovery process is complicated.

As it happened, just as I was preparing for my operation, a close friend with ovarian cancer found herself in the hospital for a complicated emergency surgery. When we spoke afterward to compare notes, I confessed that the process had left me feeling alarmingly invaded. "They just keep cutting off pieces of me, bit by bit," I said. "I feel robbed." She answered with a weary assent and an admission that has haunted me ever since. "I just don't know," she replied, "how many more times I can get back on that table."

Not everybody goes through the emotional wringer after an operation. My pal Chez says that after his brain surgery, "I was just happy to have survived." And in the days after her surgery for thyroid cancer, my neighbor Stacey says she felt little more than "exhaustion and helplessness." But my friend Meera had a different experience. "I felt as if something had been taken away from me," she says. "It was nice not to be in pain anymore, but damn, surgery is violent. No one warned me of that. "

So when an acquaintance said last week that he was facing the prospect of an upcoming operation with an overwhelming sense of "violation," I understood exactly what he meant. Because I've felt it too. A lot of us have. Of course, we're immensely grateful for the procedures that mend our bodies and save our lives. Few of us get out of this world unscathed, and if we need to surrender a few pieces of ourselves to stick around with less pain and for a longer time, that's a fair tradeoff. But maybe if our surgeons mentioned that we might feel very mad at them, we wouldn't wind up quite so mad at them. Maybe if we knew, going in, that there was a possibility we'd come out traumatized, we'd be better equipped for the psychological storms ahead.

My little triangle of gashes – like that red rectangle on my thigh -- is pretty damn cool. But sometimes when I step out of the shower and catch a glimpse of myself in the mirror, I can't help  a sudden flare of rage. They cut me, I think. And it scares me and it pisses me off. I would rather have my life than a pristine expanse of skin. Anyone who's been through a similar experience would say the same. But the scars of surgery aren't just on the body -- and sometimes the cure can be almost as devastating as the sickness. That's what nobody ever told me.