The year in viral videos

Cats! Babies! Honey Badger! And that day of the week you can't get out of your head 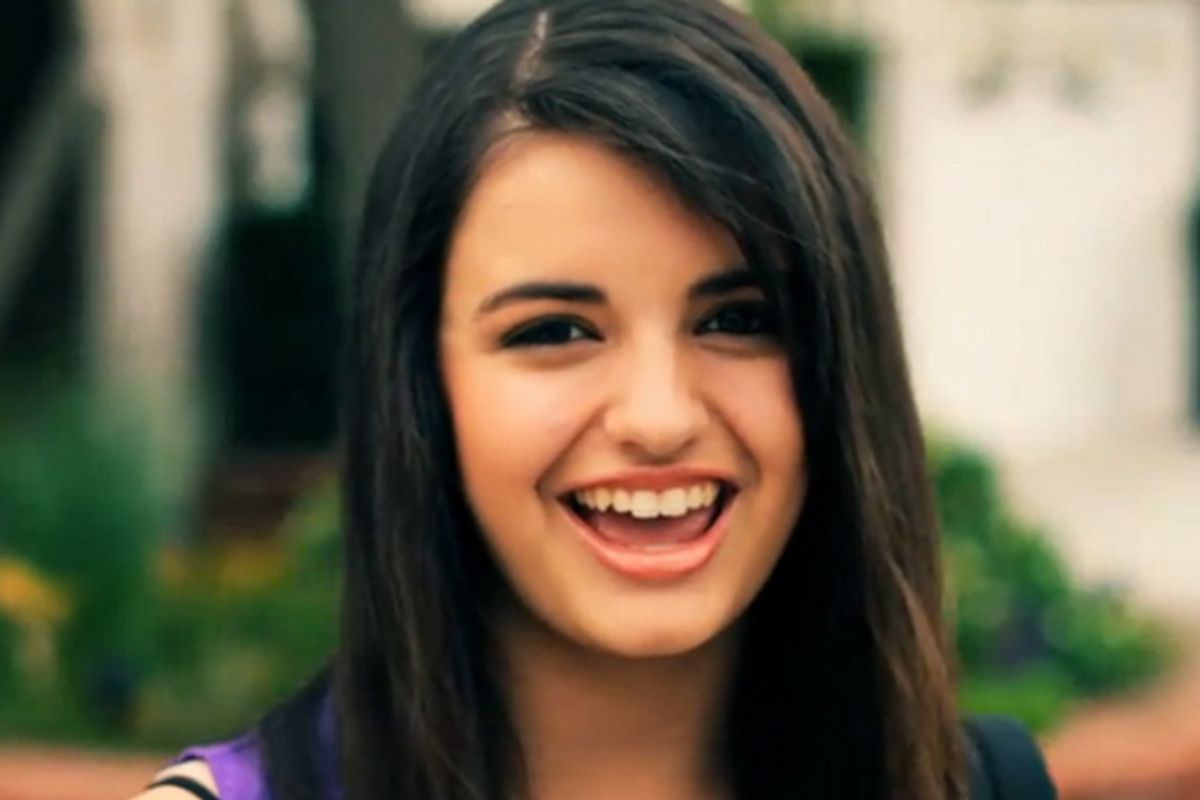 Another year gone by. And with it, all those precious hours that might otherwise have been spent writing novels and training for marathons, sacrificed at the altar of talking dogs and people ripping up paper. Thanks, YouTube! So with heavy hearts and glassy eyes, we bid adieu to the videos that this year made us laugh, sparked our outrage, touched our hearts and made us feel like partyin' partyin'.

As if to answer the question, "Is there anything more hypnotically odd than Rebecca Black's 'Friday'?" along came the glorious, three-and-a-half-minute endurance test known as Nyan cat. With its inspiring "Nyanyanyanyanyanyanya!" lyrics and its gif of a smiling half-kitty, half-Pop Tart with a rainbow soaring out its butt, Nyan cat made absolutely zero sense. It has been viewed nearly 55 million times. Peanut Butter Jelly Time and Ooga Chaka Baby, make room on the dance floor.

Exactly what it says it says. It's pretty simple. And if this doesn't make you squee at the 33-second mark, you're dead inside. I'm sorry your mother didn't love you.

OK, so "Debbie" wasn't real. The fact that she openly posts on YouTube and Twitter as Cara Hartmann was kind of a tipoff. The fact eHarmony itself got into the act after she went viral, noting that they don't even do video personals, was another. But there was something about the crazy cat lady's two-and-a-half-minute monologue – the way it went from shy and flirty to a tearful, "I know I can't hug every cat!" confession that rang familiar alarm bells with every person who's ever had the spooky realization, "I am trapped on a date with a lunatic." Which is every person. Oh, Debbie, we want to be on a rainbow with you, too.

When Lt. John Pike cavalierly aimed his can of pepper spray at a peaceful chain of protesters at the University of California, Davis, back in November, his image became an instantly appropriated meme. But though there's plenty of room for parody to be found in a still photograph, it was the video of Pike and his cohorts, dousing students over the howls of the crowd, that became a turning point in the Occupy movement -- and a stunning reminder of what abuse of power looks like.

Telling my dad that I am gay - LIVE

In the year's most riveting coming-out story, 21-year-old Randy Phillips placed a late-night call to his father from his Air Force base in Germany. "I'm as nervous as I can ever remember being," Phillips said. "He has no clue." And then, after insisting his father confirm his love for him, Phillips told him he's gay. And when his father, half a world away, replied, "I still love you, son ... It doesn’t change our relationship, you hear me?" it was a tear-jerking testament to the bonds of family, and the beauty of acceptance.

In an impossibly cute clip, a cheerful pair of brothers show off their mismatched socks, trade flailing hand gestures, and, amazingly, babble back and forth in what looks more like a more meaningful conversation than any episode of "Fox and Friends" that has ever aired. In addition to being shamelessly delightful, the video lent itself easily to colorful translations of their conversation and reimaginings of the boys in their later years. Anything that can get Michael Chiklis is a diaper wins.

There were many cute babies this year. But only one channeled the Jessie Spano "I'm so excited, I'm so scared" gamut of emotions like little scene-stealer Emerson. Watch as he goes from terror to hilarity, again and again, as mom blows her nose. One minute of compelling evidence for why people keep having babies – because they're so goddamn funny.

"This," our narrator explains flamboyantly, "is the honey badger." And in a clip from the kind of nature special that might get people to actually watch PBS, the "pretty bad-ass" creature goes on to demonstrate his aptitude for not "giving a shit." Sure, it's all as ridiculous as turning down the volume and providing your own commentary for any National Geographic opus, but Honey Badger and his sassy narrator Randall nevertheless became heroes of our time. Charlie Sheen only wishes he was such a "nasty crazy-ass."

Marcel the shell with shoes on

What's cuter than Zooey Deschanel, but without the side effect of making you want to punch a wall? Marcel, we missed you so. Voiced again by the pitch-perfect Jenny Slate, the world-weary yet hopeful Marcel expounded on the merits of a piece of bread as a bed, the hazards of traveling by bug ("You're only going to go where the bug wants to go") -- and somehow managed to be winsome without being all Brooklyn about it. Why do we love Marcel? Uh, 'cause it's worth it.

He was a panhandler on an Ohio freeway, brandishing a sign that read, "I have a God given gift of voice." And when the Columbus Dispatch's Doral Chenoweth III pulled over one day to ask for his story, an unlikely, golden-throated viral star emerged. Instantly, the former voice-over artist – who'd fallen in recent years into "alcohol and drugs and other things" – was fielding lucrative job offers. It was an apparent feel-good redemption story, sullied only by the reality that Williams was not quite prepared for sudden fame and success. He went in and out of different rehab clinics. The Cavaliers withdrew their offer to be their announcer. But today, Williams is the voice of New England Cable News and says he's been sober since May. It's not quite as spectacular as the morning he opened the "Today" show, but it's still a long way from the streets he roamed just a year ago.

Appalling. Amateurish. And God help us, inescapable. When 13-year-old Rebecca Black's parents granted her wish to make a music video, little could they have imagined it would become the most watched clip in YouTube history. (Trololo man is still getting over the defeat.)  It launched a gazillion parodies, secured Black the patronage of Katy Perry, cleared up any confusion over where Thursday and Saturday fit in the scheme of things, and most of all, became the end of the week anthem that will never die. When someday your grandchildren are singing of "fun, fun," tell them where you were the moment you followed a fateful link from a friend that said, "WTF is this?"