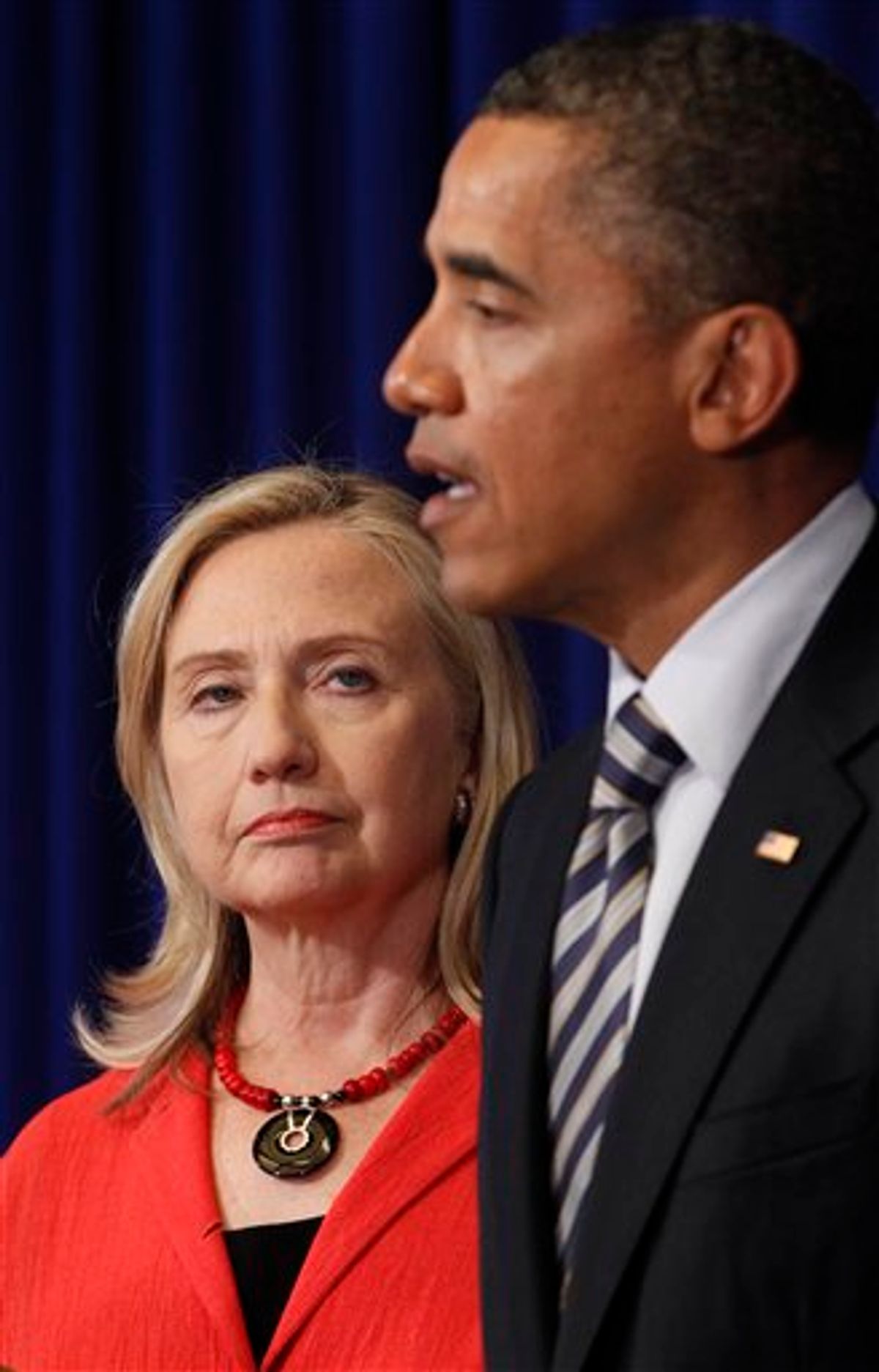 There are all sorts of uncertainties about how the political world will evolve in 2012, but we can say with confidence that an awful lot of the media’s oxygen will be sucked up by red herrings – seemingly big and exciting stories that are rooted in possibilities that have virtually no chance of coming to fruition. Here are the five biggest red herrings to watch out for in the year ahead:

The idea: Hillary Clinton will replace Joe Biden on the Democratic ticket in 2012 in an effort to motivate the party’s base. The move would also be a way to anoint Hillary as Obama’s successor for 2016.

Why we’ll hear about it: Because it’s an easy and irresistible, personality-based story for the media, which kicks the speculation into overdrive every time an even remotely credible political figure advances the idea.

Why it won’t happen: The reasons are many. Start with the reality that Biden hasn’t committed any fireable offenses as vice president and isn’t an electoral drag in any way. We’re not talking about Spiro Agnew or Dan Quayle here.

There’s also the fact that vice-presidential candidates, even when they’re popular and generate lots of buzz, don’t move voters in November. Just remember: The biggest V.P. mismatch of all time, between Lloyd Bentsen and Quayle in 1988, ended up being worth nothing to Michael Dukakis.

Plus, if Obama did make the switch, wouldn’t the media portray it as a desperate move – an embattled president panicking at meager poll numbers? That would only reinforce Republican efforts to caricature the Obama White House as a flailing, chaotic operation. And why would Hillary even want the job? It wouldn’t improve her positioning for 2016, if that’s what she’s interested in; she’s already the Democratic Party’s biggest star not named Obama. But if she did take Biden’s place, the general election would (unfairly) be portrayed as a referendum on her popularity. A defeat would be blamed on her and would hurt her positioning for ’16.

The idea: He’s the breakout Republican star of the past two years, an unusually compelling communicator who’s won in a big blue state and who could have been the party’s presidential nominee if he’d decided to run – and he passes the right’s abortion litmus test. Sounds like a dream addition to the national ticket for the GOP.

Why we’ll hear about it: Because the political media loves talking about Christie almost as much as it loves veepstakes stories – and because in many ways, Christie really does make sense as a V.P. prospect. Plus, if Mitt Romney wraps up the nomination early, what else will we talk about in the run-up to the August GOP convention?

Why it won’t happen: Because Christie is not a good match for the most likely nominee, Mitt Romney, who must contend with a conservative base that is deeply suspicious of him. Thus will Romney, if he is the nominee, be under enormous pressure to use his running-mate pick to prove to the right that he’s really one of them and that his will be a fundamentally conservative administration. And Christie, who has strayed from Obama-era conservative orthodoxy on immigration, guns and Muslims, is too closely associated with the moderate/Northeast sensibility that Romney (in the eyes of the right) embodies.  There’d also be the risk that Christie would overshadow Romney with his charisma – and cause headaches with his penchant for unpredictable antics.

Christie might make more sense as a No. 2 for a different GOP nominee – Rick Perry, say. But the odds of someone besides Romney winning the nomination seem to be dimming. And if a non-Romney candidate does prevail, it will decrease the GOP’s odds of winning in the fall, making the No. 2 slot that much less attractive to Christie, who already enjoys being governor of New Jersey and who risks losing his 2013 reelection campaign there the more he focuses on national politics.

The idea: Donald Trump, who flirted with a bid for the Republican nomination earlier this year, will mount a third-party bid for president in 2012.

Why we’ll hear about it: You might have noticed that the media likes to pay attention to Donald Trump, who just changed his registration to independent and who has been intermittently threatening to run. Plus, a group called Americans Elect has secured 50-state ballot access for a candidate who will be chosen through an online convention in the spring, guaranteeing that there will be all sorts of speculation about independent candidates in early ’12.

Why it won’t happen: In lieu of a detailed explanation, I simply refer you to the $184.27 Donald J. Trump Challenge – the contest I ran earlier this year when Trump was last pretending to be interested in running for president.

4. The unmotivated conservative base

The idea: Tea Party Republicans, dejected by their party’s selection of Mitt Romney as its presidential nominee, end up sitting out the general election, allowing Barack Obama to win a second term.

Why we’ll hear about it: When Obama was elected, the GOP base recommitted itself to “pure” conservatism based on a belief that the apostasies of Bush-era Republican leaders had given the ideology a bad name and enabled Obama’s rise. And the right’s suspicion that Romney is at heart a “big government” Republican is real; it’s no accident that he hasn’t been able to push past 30 percent in GOP polls all year, despite numerous meltdowns by his rivals.

Why it won’t happen: Because no matter how real conservatives’ reservations about Romney are, they’re nothing compared to their animosity toward Obama. After all, what the Tea Party movement really represents is the right’s hysterical overreaction to the emergence of a Democratic president – something we’ve seen before in modern history. So while the average conservative may prefer that the GOP nominate someone besides Romney, the chance to rid the White House of a radical socialist usurper will provide more than sufficient motivation to turn out in November. It’s also worth keeping in mind that Romney is actually very well-liked by Republican voters, even if they haven’t all flocked to his campaign. At the end of the day, they’ll be there for him if he’s the nominee.

The idea: The president will finally endorse same-sex marriage.

Why we’ll hear about it: Because it seems like only a matter of time before he does. In fact, he already did once before, back in 1996 when he was running for the state Senate in a solidly liberal Chicago district, and he’s been doing everything he can short of actually saying it to send the message that, deep down inside, he’s fine with gay marriage.

Why it won’t happen: 2012 is an election year, Obama’s political position is tenuous, and while gay marriage is steadily gaining acceptance among voters, endorsing it could still cause problems in key swing states like Ohio. The White House has apparently settled on a strategy of letting other administration figures speak out more forcefully and seems dedicated to making the ’12 campaign about Republican extremism and obstructionism and (assuming he’s the nominee) Romney’s status as a top 1 percenter. Gay marriage very much feels like something that President (or former President) Obama will get around to endorsing in 2013.