The right spins the Santorum surge

Sure, no one liked him when he was down and out, but now he's not-Romney No. 1! 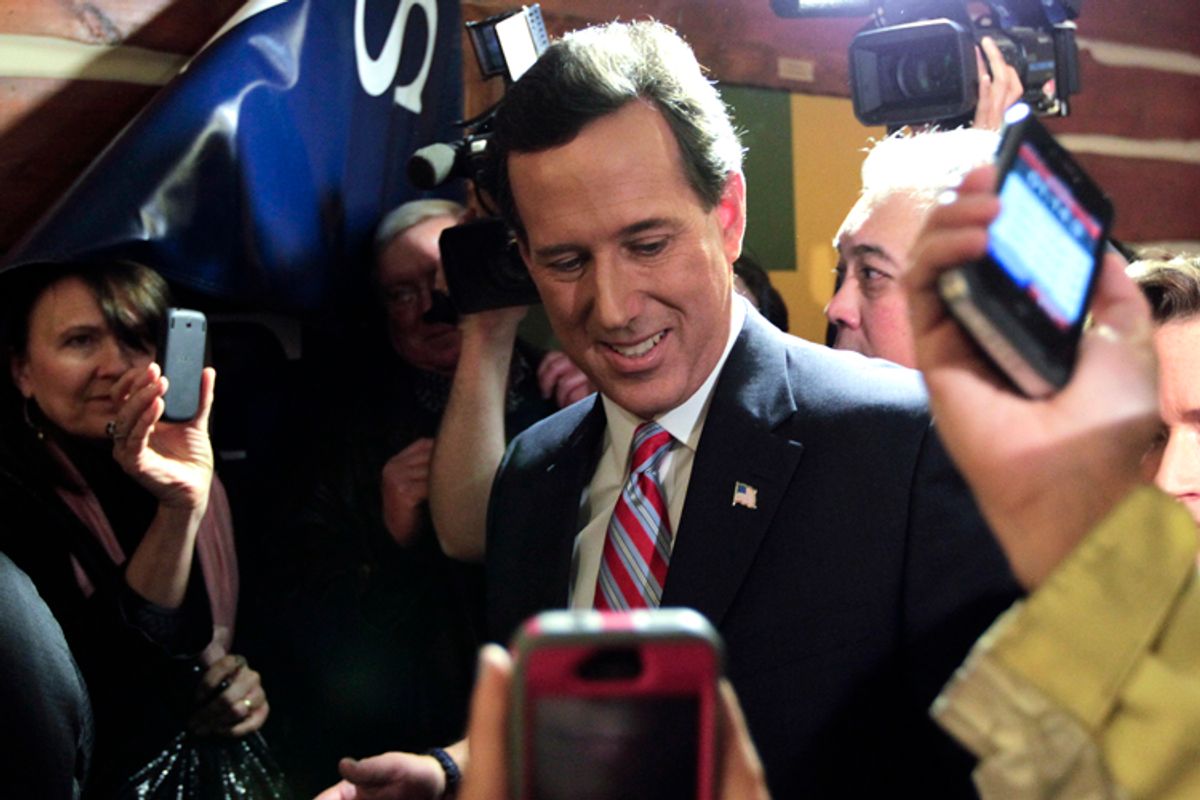 Rick Santorum's not-quite-victory in Iowa last night was unlikely but also sort of inevitable -- he was "next in line," and Ron Paul was doomed by the portions of his platform that aren't horrible -- and now we get to watch the anti-Romney conservatives pretend they've always liked ol' Rick, the True Conservative, the only credible standard-bearer, an electable, decent man who isn't a Washington insider.

(If Glenn Beck, for example, could trust "the reins of power" in any current GOP candidate, it would apparently be Rick Santorum.)

Some are wise enough to bemoan the entire remaining slate, though they of course blame outsiders, and not the actual rank-and-file of their own movement. Jim Geraghty hates Iowa, and says the kooky results (Ron Paul!!!) can be blamed on the lack of a Democratic primary sending unreliable "independents" -- presumably baked out of their minds -- to GOP caucuses to spoil the entire campaign.

Erick Erickson -- a longtime Santorum hater and one of the few pundits brave enough to label the culture warrior a false conservative, because Erickson declares everyone he dislikes for any reason to be Not a True Conservative -- was so dispirited that he literally blamed Bush. (Well, Bush and those damned Paul-voting independents: "If you take out the non-Republicans who came into the caucuses last night for Ron Paul, the Republican turnout was less than 2008 — even considering the ratio of independents to Republicans who turned out in 2008." And if you take out the votes for Santorum, Romney, Paul and Gingrich, Rick Perry won!)

The problem, per Erickson, is that Bush picked Cheney instead of a likable young president-in-waiting. The GOP, he has heard, likes "orderly processes" of succession. If only Bush had shown the foresight to select Marco Rubio as his running mate! In Erickson's eyes, Bush's failure to appoint an heir is what led to the John McCain campaign and Mitt Romney's painful stumble toward the nomination. There is still hope, we're told, for someone else (unnamed!) to enter the race and build momentum for the really important contests, which are now apparently scheduled for April.

If I were Perry, I’d wake up tomorrow, say I refuse to surrender the Republican Party into the hands of big government conservatives after all the gains the tea party has made, and then announce I’m firing all my political staffers and communications staffers and ask South Carolina to help me reboot to victory. Make it an Alamo stand and, if like at the Alamo Perry goes down, perhaps there’ll at least be a rallying cry for small government conservatism left over.

I can't for the life of me figure out what makes Rick Perry "more conservative" than Rick Santorum but something something Alamo guns a-blazin' cowboy Custer etc., etc. (Erickson then promoted a blog from a diarist making the case that perhaps Mitt Romney isn't such an unmitigated socialistic big government evil.)

Kathryn Jean Lopez, of course, truly has always liked Rick, because they share a religion and a twisted puritanical revulsion for the whole of modernity.

As Roy Edroso noted, Jennifer Rubin's been a Santorum fan since about August, so with the race now down to her two favorites, I imagine she's thrilled. She certainly seems pleased -- in her usual dyspeptic loathsome way -- to stick it to those liberals who hoped vaguely for a Ron Paul victory. (She knows liberals like Paul because of his "bizarre views on Iran" and they hate Santorum for "his robust foreign policy." She used the word "robust" again later, because it is code for "wants to bomb Muslims.")

That post was just a warmup to her true defense of Santorum, whom she defends from Ericksonian charges of secret man-on-big government love. The case boils down to the facts that Santorum -- like everyone else in the Republican Party -- promises to repeal Obamacare and slash taxes yet further on our put-upon 1 percenters. (And let's be honest -- Santorum got into politics solely to be a soldier in God's war on gays and abortionists. On every other issue he always has and always will just do whatever the think tanks and well-connected interest groups say, making his "record" on something like Medicare Part D entirely beside the point. If the party doesn't like Medicare anymore, he doesn't either!)

Ira Stoll makes the entirely unconvincing case that Santorum's slight victory over Ron Paul was because voters were hungering for "a candidate who was willing to take on Ron Paul on foreign policy," which, last I checked, was all of them. Those who vote Republican solely on "foreign policy" issues (bomb Iran) will likely continue pretending that the race from here on out will come down to which man can sound the hawkiest, even as the candidates themselves run on which one promises to ban the most abortions and deport the most immigrants.

There is, in other words, plenty for "establishment conservatives" to talk themselves into liking about Mr. Santorum as he takes his Iowa victory lap. Those who consider him an unlikable and decidedly unelectable boob will probably just keep quiet until he begins fading.