Rick Santorum flip-flops on his comments about "black people." What if we take him at his word? 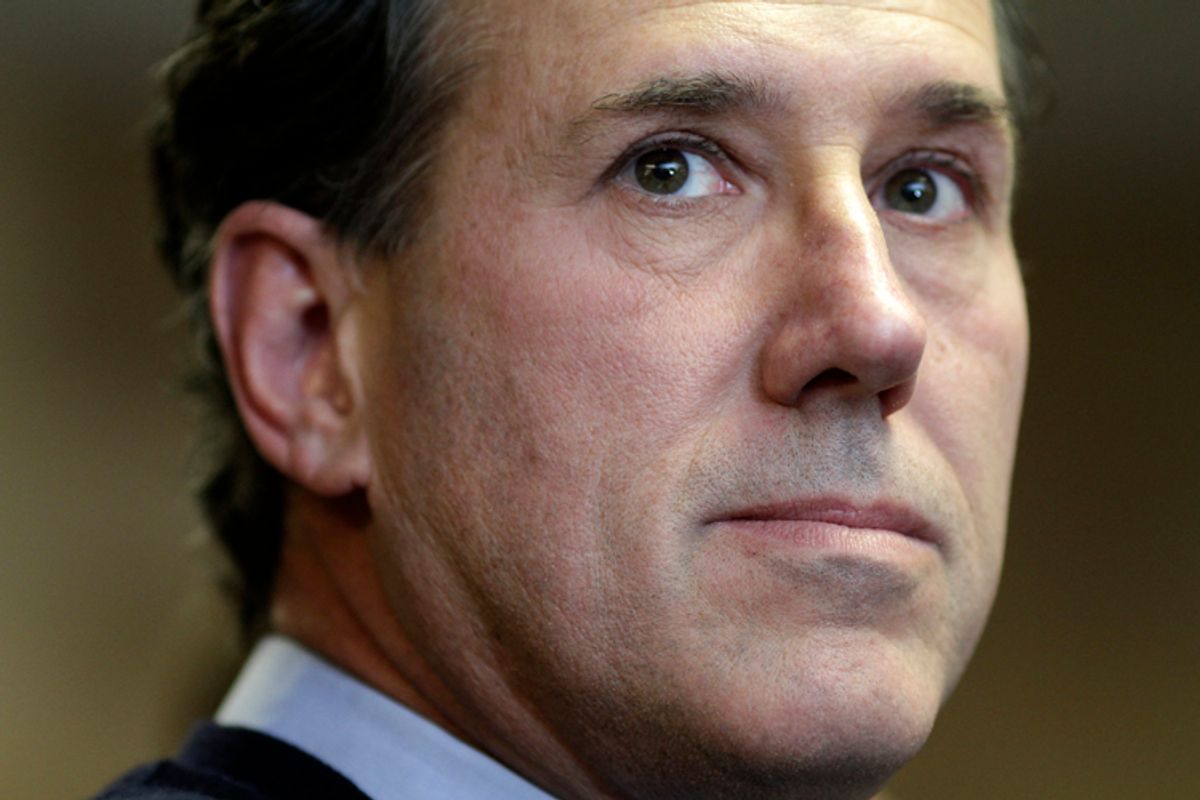 Formerly surging GOP presidential candidate Rick Santorum, now struggling, is trying to deny ever saying, "I don’t want to make black people’s lives better by giving them somebody else’s money. I want to give them the opportunity to go out and earn the money.” Even though the day after he appeared to make that familiar old GOP argument, he didn't deny it. What gives?

Let me try to give Santorum the benefit of the doubt, for a minute. Even on Monday, I noted that his "black people" comment seemed like a strange non sequitur, because no one was talking about race. The former Pennsylvania senator was in the middle of a typical rant about welfare, specifically Medicare, when he made the remark. On the other hand, I watched and listened to the CBS News video repeatedly, and I had no doubt he said "black people."

And on Monday, when Santorum was asked about his strange racial comment by CBS's Scott Pelley, he didn't deny making it, and seemed to justify it with a reference to the movie "Waiting for Superman," the controversial pro-charter school documentary that depicts black families struggling to get into good schools. "I've seen that quote, I haven't seen the context in which that was made," Santorum told Pelley. "Yesterday I talked, for example, about a movie called, um, what was it? 'Waiting for Superman,' which was about black children and so I don't know whether it was in response and I was talking about that." Santorum went on to say: "If you look at what I’ve been saying, I’ve been pretty clear about my concern for dependency in this country and concern for people not being more dependent on our government, whatever their race or ethnicity is."

But now he's telling CNN and Fox News, "I didn't say black." Think Progress tracks his changing story. He told John King Wednesday night: "I’ve looked at that quote, in fact I looked at the video. In fact, I’m pretty confident I didn’t say black. I started to say is a word and then sort of changed and it sort of — blah — mumbled it and sort of changed my thought."

That's interesting. It's even possible. On Tuesday, No More Mister Nice Blog, which regularly skewers Santorum and the right, argued that it wasn't clear Santorum said the word "black," and that, in fact, Santorum's larger point was that government programs are out to enslave all of us, not merely black people. Mediaite reporter Tommy Christopher made the same point in a post arguing that Santorum had made a garbled sound, something like "blargh," rather than saying "black." I listened closely to the tape again, and I continued to hear "black," but I acknowledge there's room to disagree.

Still, no one likes to be accused of racism, not even the vast majority of Republicans. So why wouldn't Santorum immediately tell Pelley he didn't say it – especially if he didn't? Most people who hadn't made the comment would have said something like, "I'm sorry, you must have heard me wrong. There's no way I'd ever say anything like that." But here, let me give Santorum a little bit of credit: He didn't say that to Pelley, because in fact, it's not true. It's quite possible he would say something like that.

As I wrote on Monday, when the CBS story broke, Santorum's comment about black people is straight from the GOP playbook that created the "Reagan Democrats" to whom Santorum supposedly appeals. That playbook helped convince the white working class that the government is taking their money and giving it to undeserving black people. When pollster Stan Greenberg did his groundbreaking 1985 study on Macomb County, Mich., the original home of Reagan Democrats, he found that its voters saw the federal government "as a black domain where whites cannot expect reasonable treatment" – a view Republicans had been encouraging at least since Richard Nixon.

But lately, as No More Mr. Nice Blog argues, the GOP has actually updated its argument, to make clear that all of us are potential "takers," not just black people. The sympathetic way to frame that is to say, as Santorum does, that President Obama and Democrats want all of us to be "dependent." The not so sympathetic way is to attack vast swaths of the public – cops, firefighters, teachers; Social Security and Medicare recipients, people receiving unemployment insurance – as the new welfare cheats. That's been the tack of Republicans in Wisconsin, Ohio and Indiana, which may now be backfiring.

So, in fact, it's possible Santorum didn't say "black people." (Although I still have to ask, if he admits he said "blah" people, what was he really trying to say? Blond people? Bloggers? Bland people?) But normally, if you're accused of racism, you're horrified and deny it immediately. You don't wait days, until you see it's a political liability, and then deny it. Unless you're a Republican, where you know it can benefit you with some folks and not with others. That's a classic example of dog-whistle politics. Santorum may just be trying to have it both ways.

It's a little bit like Ron Paul's evolving story on his newsletters. Confronted about their racism when he campaigned to return to Congress in 1996, Paul first tried to defend the remarks. It wasn't until 2001 that he floated the notion that someone else had written the newsletters, and it's only recently that he completely deplored their racism and claimed he had absolutely no idea what was in them.

In Santorum's case, it's only taken days, not years, for him to deny making the remarks. Maybe that's progress. I think it's also a symbol of his not ready for the big time campaign. Santorum was the last candidate to get the front-runner treatment from a GOP base that hates Mitt Romney, just in time to almost beat Romney in Iowa. Now it looks like he's going to do what his predecessors did and melt under the spotlight.

But it's still worth paying attention to the way Santorum talks about race and social welfare.  To Republicans, we're all stereotypical "black people" today, lazy slackers who have only ourselves to blame if we're not making it. It was appalling and inaccurate when they said it – or dog-whistled it – about African-Americans.  It's appalling when they say it about any of us.