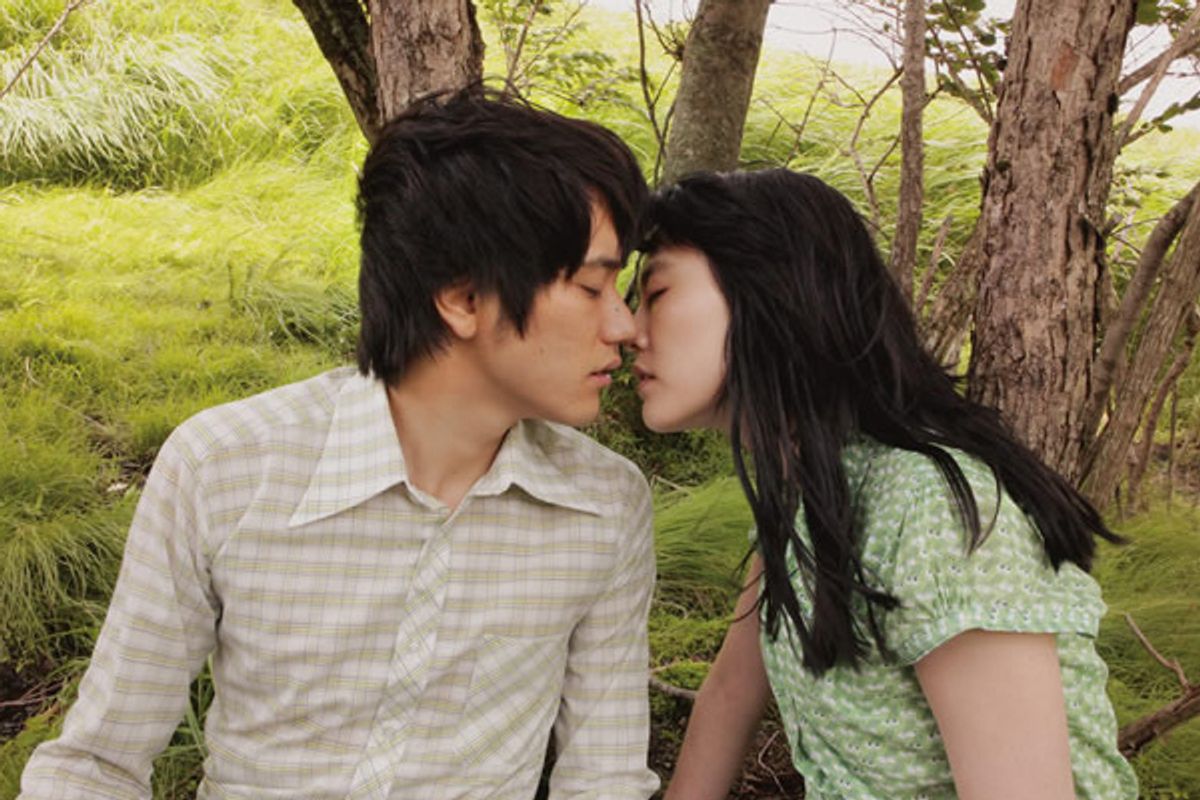 Young love in all its agonies is something we've all experienced, and I'm pretty sure it's something we all remember at a visceral level, whether we're 14 or 95 or somewhere in between. Yet it's a notoriously difficult set of emotions and sensations to capture in novels or plays or films, at least not without resorting to the worst kinds of clichés. (I'm looking at you through my Magic Mirror, Stephenie Meyer! Not that the "Twilight" books and movies are the worst offenders -- not by a long shot.) What's so great about writer-director Tran Anh Hung's slow-building, gorgeous adaptation of Japanese novelist Haruki Murakami's "Norwegian Wood" is that by the time it was over I felt completely transported into a rapturous, swoony state of early-20s romance, that condition where you feel right at the edge of heartbreak and insanity, your brain and skin and nerve endings possessed by the yearning for another person. (And yes, you get to hear the title song twice, once in a sweetly hilarious Anglo-Japanese acoustic version, and once for real.)

First published in 1987, and subsequently translated into 30-odd languages, Murakami's "Norwegian Wood" is about a death-haunted love triangle amid the campus strife of Tokyo's universities in the late '60s. An enormous sensation in Japan -- it was embraced by many younger readers and rejected by the country's conservative literary establishment -- the book also established Murakami as a superstar in world literature, paving the way for acclaimed later works like "The Wind-Up Bird Chronicle" and the recent "1Q84." There are any number of reasons why Tran, a Vietnamese-born one-time Oscar nominee who lives in France, seems like a strange choice to adapt this hugely popular novel. He isn't Japanese and doesn't speak the language, and his films, including "The Scent of Green Papaya" (1993) and "Vertical Ray of the Sun" (2000), are more concerned with lavish settings and languid sensuality than with storytelling.

But maybe this was the project Tran has been waiting for. I rate this the best film of his non-prolific career by far, and while of course Murakami buffs will have their complaints, this "Norwegian Wood" ultimately develops the right blend of spooky, sexy, pulpy intensity. For the first few minutes, the stylish young cast, spectacular Japanese settings and wide-screen digital images of cinematographer Lee Ping-bin are almost disconcertingly beautiful, and I was worried about sitting through two hours of picture postcards. But by the time teenage Kizuki (Kengo Kora) asphyxiates himself in the family car, leaving his girlfriend Naoko (onetime Oscar nominee Rinko Kikuchi) and best friend Watanabe (Kenichi Matsuyama) to muddle along without him, I was utterly hooked on Tran's long, languorous takes and startling shifts of focus.

Kizuki is the first character in "Norwegian Wood" to die by his own hand, but not the last; through Lee's photography and Jonny Greenwood of Radiohead's insistent, hypnotic score, Tran powerfully captures Murakami's notion that young love is an irresistible and universally destructive force, akin to drug addiction or mental illness. After Kizuki's death, Watanabe's new best friend becomes the caddish, drop-dead-handsome Nagasawa (Tetsuji Tamayama), who strings along his upper-crust girlfriend while grabbing as much side action as possible. When Watanabe asks whether it's true that he's slept with 100 women, Nagasawa tells him not to exaggerate: "It's more like 70, at most." Watanabe is far too much of a gentleman to emulate this example, and once he reconnects with the bereaved (and remarkably beautiful) Naoko, his fate is sealed. But one could argue that Nagasawa's cynical attitude toward women and romance is the path of survival.

Tran's Vietnamese-set films have been tremendously atmospheric, and this one captures the angry, turbulent, trashed surroundings of Tokyo's campus uprisings in wonderful detail, even though Watanabe and his friends are more concerned with affairs of the heart. Watanabe falls hard for Naoko, but she's clearly still suffering in the wake of Kizuki's death, and retreats to a hospital in the mountains, a richly symbolic setting that suggests both Thomas Mann's "Magic Mountain" and Japanese director Naomi Kawase's little-known masterpiece "The Mourning Forest." While she recuperates under the care of a mysterious fellow patient named Reiko (Reika Kirishima), Watanabe meets an adorable gamine named Midori (Kiko Mizuhara), who already has a boyfriend but makes it clear that she'd pick Watanabe -- but if, and only if, he picks her above Naoko and all other contenders.

It's a classic torn-between-two-lovers predicament, of the sort in which we've all been implicated at some point -- and if there's one thing we know for sure, it's that all three people are going to get hurt. Murakami has an unusual ability to make such mundane romantic affairs seem urgent and dreadful and momentous, and even though I pretty much knew what was going to happen, I watched the crucial scenes of Tran's "Norwegian Wood" holding my breath and perched on the edge of my seat. This is a wonderful, passionate, well-nigh unforgettable adaptation of a great novel about the horrors of love, and the wonderful fact that at least some of us live through it and come back for more.

"Norwegian Wood" is now playing at the IFC Center in New York and the West End Cinema in Washington, D.C. It opens Jan. 20 in Chicago and San Francisco; Jan. 27 in Los Angeles, Seattle and Wilmington, Del., and March 2 in Portland, Ore., with more cities and dates to follow.