Pick of the week: Take the Robert Bresson challenge

Pick of the week: Exploring the spiritual vision and radical technique of an often-overlooked French genius 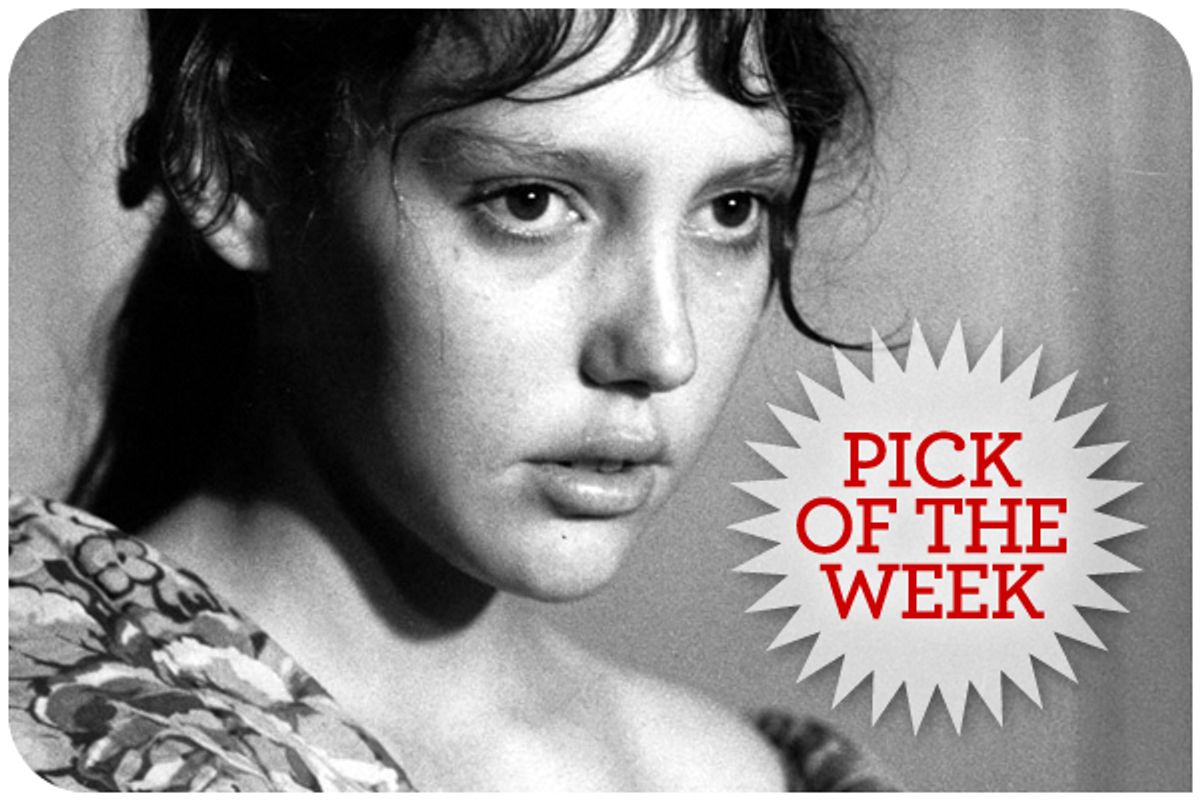 Watching any movie always involves getting used to a particular director's narrative rhythms -- that is, how he or she is telling the story, as well as what kind of story it is. Watching the films of Robert Bresson, the ascetic French director who made only 13 features in a 40-year career, reminds us that most of the movies we watch, from Steven Spielberg to the Coen brothers to Pedro Almodóvar, share an essentially similar set of narrative principles. Bresson's best-known pictures simply don't. This winter and spring, North American viewers get an exceedingly rare opportunity to see Bresson's films projected on the big screen, in a near-complete retrospective that opens this week in New York and will move on to many other cities. (For more details, see below.)

Bresson moves the camera rarely and only when necessary, uses only the crudest special effects and minimal musical motifs (or none at all, in later films), and never relies on editing tricks to heighten the drama, which never amounts to much by the standards of post-D.W. Griffith action-oriented cinema. Most famously, he has no interest in conventional drama or characterization, compelling his nonprofessional actors -- or "models," as he called them -- to do repeated takes, in an effort to strip all "performance" from their line readings. (Bresson was apparently displeased when Anne Wiazemsky, the teenage star of his 1966 "Au Hasard Balthazar," went on to become a professional actress.) His scenes are direct, clear and concise, with little visible emotion or inflection. Faces are often expressionless and eyes downcast. He frequently depicts action or motion by means of synecdoche, showing feet walking, hands turning doorknobs and so on.

Viewers accustomed to the pace and style of Hollywood movies can sometimes find themselves alienated by the seemingly obscure or symbolic mode of European-style art-house cinema -- What am I missing? Why don't I get this? -- but Bresson presents almost the opposite problem. There are no 12-minute shots of people driving cars; his movies are brief and tell simple stories that aren't difficult to follow in the slightest. "Au Hasard Balthazar," which I take to be his masterpiece (it's a pretty conventional opinion), is exactly what it seems to be, a fable about the parallel lives of two suffering innocents, an abused donkey and an abused girl. "Pickpocket," from 1959, is an even more compact tale about a petty criminal who begins to imagine a different way of life, and half-intentionally allows himself to be captured and imprisoned.

In those cases and others, the austerity and simplicity of the film can be disorienting on its own terms; you cast about for some familiar emotional or psychological foothold and don't find one. It takes a while to relax into what critic Kent Jones has called Bresson's "perfect rhythmic clarity," a "profound sense of harmony between images and sounds" that appears artless but is in fact exquisitely controlled. The mysteries of films like "Au Hasard Balthazar" and "Pickpocket" and "Mouchette" (probably his three most highly regarded works) lie entirely in how you interpret them and what you take away from them, in how and whether the spiritual or transcendental lessons Bresson tries to impart work on you.

Bresson is almost certainly the most important Christian, and specifically Roman Catholic, filmmaker in cinema history. (We can have the debate about Martin Scorsese some other time, but he'd be happy to concede the point.) Yet it's not clear how much comfort the faithful have ever found in his work, which is rooted in the severe strain of French Catholicism known as Jansenism, and in the demanding, uncompromising Jesus Christ of the Sermon on the Mount. Bresson's influence, which has never been wide, is largely found among semi-experimental filmmakers who tend toward atheistic or agnostic worldviews, from the French New Wave to Jim Jarmusch and Michael Haneke. It was Jean-Luc Godard, no friend of the Church, who described "Au Hasard Balthazar" as containing "the world in an hour and a half." Belgian filmmaking brothers Jean-Pierre and Luc Dardenne, of "The Son," "L'Enfant" and the forthcoming "Kid With a Bike," are the most obvious Bresson acolytes in contemporary cinema, and perhaps the most sympathetic to his faith.

That said, Bresson's rarely seen color films of the 1970s appear to render an increasingly ambiguous verdict on the relationship between man, God and the world. It's often startling to encounter motorbikes or transistor radios or rock music in Bresson -- he seems to belong to a pre-technological era -- but it's safe to say he generally views such things in a baleful light. If anything, as the settings and themes grow more modern in pictures like the Dostoyevsky-inspired "Four Nights of a Dreamer" (1971), the teen-suicide drama "The Devil Probably" (1977) and the Tolstoy adaptation "L'Argent" (his final film, made in 1983), Bresson's rejection of modernity grows more forceful. In Kent Jones' wonderful phrase, it's as if he has "drifted to the edge of his 'Christian universe' and measured the void beyond on behalf of his defeated protagonists."

If you're already an admirer of Bresson's most famous films, this retrospective allows you to see them again, in full-screen projection and often gorgeous new prints, and also to catch other works you've likely never seen at all. "Four Nights of a Dreamer" has been unavailable in North America for many years (except in a squashed, scratched-up and illicit bit-torrent version), and I had never previously seen the 1974 medieval mashup "Lancelot of the Lake" or Bresson's 1943 debut feature, the convent melodrama "Les Anges du Péché" (also known as "Angels of the Streets").

If you're a newcomer to Bresson, I can't promise that you'll fall in love with these movies passionately and immediately. A famous French academic supposedly once quipped that Bresson's films were more interesting to read about than to see, and while I don't quite agree, I get what he meant. There's an adjustment process in dealing with Bresson's sui-generis version of cinema; not everybody can make it, and there's no shame in that. His films do demand an open, contemplative cast of mind, but on the other hand they never waste your time and I personally find them almost addictive: The more of his aesthetic and worldview you absorb, the more of it you want to see.

Here are my five favorites, with the proviso that "A Man Escaped," Bresson's marvelous drama based on his experiences as a World War II POW, and his most commercially successful film, will play a separate theatrical run in most locations. (One Bresson film, "Une Femme Douce" from 1969, is apparently not included in this retrospective.)

Diary of a Country Priest (1951) After making his first two films in the familiar costume-drama style of the 1940s French industry (often called the "tradition de qualité"), Bresson struck out in a revolutionary new direction with this intimate and memorable adaptation of Georges Bernanos' novel about an idealistic young curate battling apathetic parishioners and a debilitating illness. At 115 minutes, "Country Priest" is much longer than most Bresson movies, but the narrative simplicity and direct, non-actorly performances he would refine in later works first come into focus here. One of Martin Scorsese's favorite films, this is arguably Bresson's most straightforward declaration of faith -- but even the most skeptical viewer will find its emotion powerful and its depiction of human suffering free of cant or sentimentality.

Pickpocket (1959) Both an ingeniously choreographed crime film and a moral drama influenced by Dostoyevsky's "Crime and Punishment," "Pickpocket" marks the apotheosis of Bresson's stripped-down style. There's little or no psychological realism or conventional drama at work in Martin La Salle's portrayal of a master thief who plies his trade at the Gare de Lyon and easily outwits the cops who seek to ensnare him. See it once to appreciate the spare elegance of the pickpocketing scenes, and then a second time to appreciate how subtly Bresson accomplishes the story of a man's self-willed corruption, his liberation through imprisonment and his redemption through love, all in less than 80 minutes.

The Trial of Joan of Arc (1962) Largely based on transcripts and eyewitness accounts of the 15th-century trial and execution of France's patron saint, this quasi-journalistic account is almost the opposite of Carl Theodor Dreyer's far more famous "Passion of Joan of Arc." With its memorably straightforward performance by Parisian college student Florence Carrez, this rarely screened film may be the most extreme example of Bresson's form of reverse sympathetic magic. In stripping the story of this legendary heroine down to a legalistic procedural -- focusing entirely on what was said and done -- he forcefully makes a case for Joan as an uncompromised (and possibly divine) martyr to moronic bureaucracy and petty politics.

Au Hasard Balthazar (1966) Probably the film best loved by Bresson adherents, and almost certainly his most heartbreaking. Teenage Anne Wiazemsky (Jean-Luc Godard's future wife) plays the rural teenage girl who is betrayed and abused, partly or arguably due to choices she herself has made. But it's her fuzzy-nosed co-star, the long-suffering eponymous donkey, who steals the show, bearing his burdens and accepting an animal version of martyrdom without complaint. Beneath the deceptively simple story lies a complex and tangled portrait of rural life defined by pride, greed, cruelty and human sin of all varieties. (Animal lovers: While the actual donkey used in the film may have been harassed and irritated during the shoot, he was not actually beaten or substantively harmed.)

The Devil Probably (1977) Shot in color among the disillusioned, long-haired youth of post-'60s Paris, Bresson's next-to-last film remains controversial, viewed by some critics as a classic study of postmodern alienation and by others as an aging filmmaker's desperate grasp at hipness. (Bresson himself was 75 when this was made.) As usual, the acting is affectless, the camera largely static and the story is deliberately "de-dramatized." We already know that androgynous 20-something drifter Charles (Antoine Monnier) will die after his explorations of religion, revolutionary politics and psychoanalysis; what we don't know is exactly why or how. Both a visually ravishing work and a supremely unforgiving one, "The Devil Probably" has the feeling of a stern farewell to youth, movies and the modern world. Bresson would indeed retire from filmmaking after "L'Argent," his next film, although he would live on for many years, dying in 1999 at age 98.

The Bresson retrospective opens this week at Film Forum in New York; Jan. 19 at the Pacific Film Archive in Berkeley, Calif.; Jan. 20 at the Harvard Film Archive in Cambridge, Mass.; Jan. 21 at the Gene Siskel Film Center in Chicago; Jan. 31 at Bard College in Annandale-on-Hudson, N.Y.; Feb. 9 at the TIFF Cinematheque in Toronto; March 1 at the Los Angeles County Museum of Art; March 3 at the Cleveland Cinematheque and the National Gallery of Art in Washington, D.C.; March 6 at the George Eastman House in Rochester, N.Y.; March 9 at the Belcourt Theatre in Nashville; April 4 at the Pacific Cinémathèque in Vancouver, Canada; April 13 at BAM in Brooklyn, N.Y.; May 1 at Northwest Film Forum in Seattle; and May 10 at the American Cinematheque in Los Angeles. (Further venues and dates may follow.)