Michael Moore and the Oscars get it right

The Academy's documentary category has been a horrible mess for years. The controversial new rules can only help 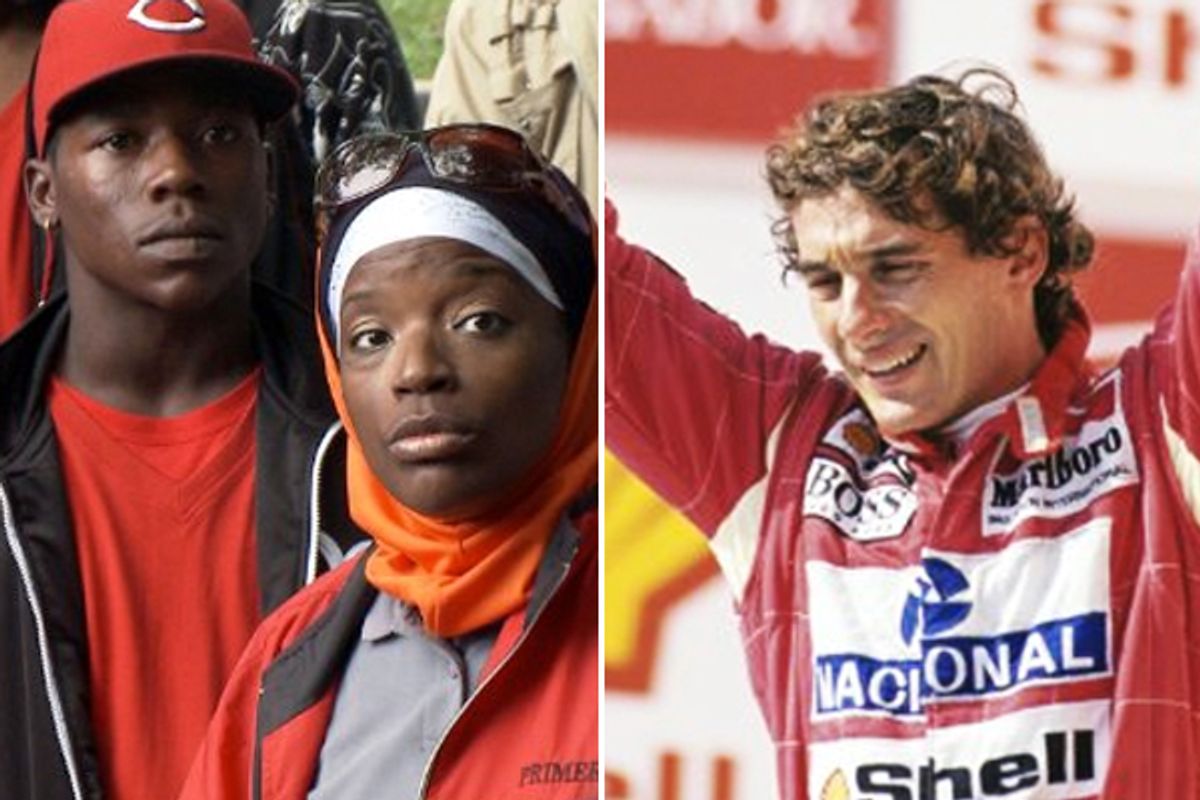 Stills from "The Interrupters" and "Senna"
--

As multiple media sources have reported over the last two days, under proposed new Academy rules, only films that have been reviewed by the New York Times or the Los Angeles Times will be eligible for the best documentary Oscar. But that's not the real story, and it's not nearly as dumb as it sounds.

"Everybody's getting excited about something that's not the real headline," explains filmmaker and blogger AJ Schnack, a co-founder of the documentary-centric Cinema Eye Honors awards. "The headline is that the Academy is making big changes to the way it selects and nominates documentary films, and based on what I know so far, those changes are overwhelmingly positive."

Perhaps the first thing to understand is that the new docu-Oscar rules, which go much further than eligibility issues, were largely pushed through by Michael Moore, who sits on the Academy's governing board. The intention behind the changes, including the bizarre-sounding NYT/LAT requirement, is to streamline a notoriously clunky and cliquey nominating process, and to ensure that the Oscar-winning documentary is "truly a theatrical motion picture, because that's what these awards are for," as Moore told indieWIRE.

Furthermore, the new rules are meant to minimize the possibility that major, well-reviewed documentaries will be shut out of the Oscar nominations for mysterious reasons, as has happened repeatedly in the past. As Roger Ebert wrote more than 15 years ago, the list of non-nominated documentaries is like an honor roll of classics, from Errol Morris' "The Thin Blue Line" to Moore's "Roger & Me," from Michael Apted's "28 Up" to Steve James' "Hoop Dreams." In recent years, you could add "Fahrenheit 9/11," "Grizzly Man" and "Waiting for 'Superman'" to that list. Two of 2011's best-reviewed docs, James' "The Interrupters" and Asif Kapadia's "Senna," have already been eliminated from consideration this year.

Under the current system, secret committees of 10 or fewer volunteers from the Academy's documentary branch view groups of films and vote on them, creating the possibility that some tiny knot of dissenters -- perhaps one or two voters -- can sabotage a film's Oscar hopes by giving it low marks. "That first round of voting, to go through all the eligible films and get to the short list, just seems really weird," says Schnack. "You have small groups of people, each of which only views a small portion of the films. Instead of voting for their passions, they can end up voting against what they dislike. I think it's pretty much true that one person can sabotage a film."

Under Moore's proposed new rules -- at least as summarized in an admirable explainer by Dana Harris of indieWIRE -- the documentary "shortlist," and later the list of five nominees, will be selected in a vote by the Academy's entire documentary branch, which reportedly has 157 members. "That restructuring, where the entire branch gets to vote and not just a small committee, strikes me as an incredibly good thing," says Schnack. "That might be the single biggest change."

Veteran documentary producer and programmer Thom Powers, who runs the prestigious Stranger Than Fiction series in New York, notes that there are legitimate concerns about exactly who's in the documentary branch and how they will vote. "That membership remains secret, although if you've been paying attention over the years, you can figure out a few dozen of the names," he says. "It's valid to wonder whether all 157 members will really dive into the 100-plus films that will qualify. Is this system going to favor the top 15 films that are most talked about and most prominent? One unfortunate thing about that secrecy is that it does favor filmmakers with deeper pockets or more powerful distributors."

In another major departure from established procedure, the five nominees will then be submitted to the entire Academy membership of 6,000 or so Hollywood professionals for final voting, not just to the specialists of the documentary branch. Under the current system, as Michael Moore puts it, "When people get the award for best documentary and they go on stage and thank the Academy, it's not really the Academy, is it? It's 5 percent of the Academy."

While the decision to use the stodgy warhorses of print journalism as an Oscar-eligibility filter may seem arbitrary and retrograde, it's an attempt to restore some order to an unwieldy system. The New York Times' editorial policy is to review every film that plays at least a one-week engagement at a theater in New York City, which nearly matches the current Oscar eligibility rules requiring a New York or Los Angeles theatrical run. (If the Times revises that policy, then the Academy promises to revisit the new rule.) Those films likely to be eliminated under the new rule, like this year's acclaimed Marine Corps documentary "Semper Fi," are those that lack commercial distribution or are bound for TV, and play as part of the International Documentary Association's DocuWeeks festival.

"I'm not that concerned with the eligibility rules," says Schnack. "They've tinkered with those six or seven times in the last 10 years, and somehow roughly the same number of films manage to become eligible." He points out that while a film like "Semper Fi" would indeed be ineligible for 2011 under the new rules, if it were to find theatrical distribution in 2012 it would receive the required Times review and become eligible next time around. Exactly the same thing applies to another shortlisted film for 2011, the Harry Belafonte documentary "Sing Your Song." It has played to enthusiastic audiences at film festivals, and will open commercially in New York this week, so it would certainly have become eligible for 2012 under the new rules.

There's a long tradition of films that are primarily or exclusively intended for television getting Oscar nominations, after meeting the letter but perhaps not the spirit of the eligibility rules. That may well change; I'm not sure, for instance, that Marshall Curry's "Street Fight," an Oscar-nominated 2005 film about an infamously dirty Newark, N.J., mayoral election, would meet the new requirements. But that's an issue in a much broader debate, and the Academy has clearly decided that it wants to honor theatrical films, not TV films. After all, as Michael Moore observes, the television industry gives out its own awards, and if they don't quite carry the cachet of an Oscar, so be it.

Some voices on the Internet, including respected indie-film blogger Anthony Kaufman, have suggested that letting all Academy members -- actors, costume designers, cinematographers and so on -- vote for the best documentary will push the awards in an ever more tepid and mainstream direction. Neither Powers nor Schnack sees it in those terms. "It's called the Academy Awards," says Powers. "Academy members should get to vote."

"Look, we love the Oscars because it's a big, glitzy ceremony with a big gold statue," says Schnack. "It's part of Hollywood history and part of documentary film history. Over the years, the winners [in the documentary category] have included Walt Disney and Jacques Cousteau and the Department of the Navy. It's a crazy, big award, and if we want to be part of it our movies should be judged as movies, by the same standards that apply to narrative films."