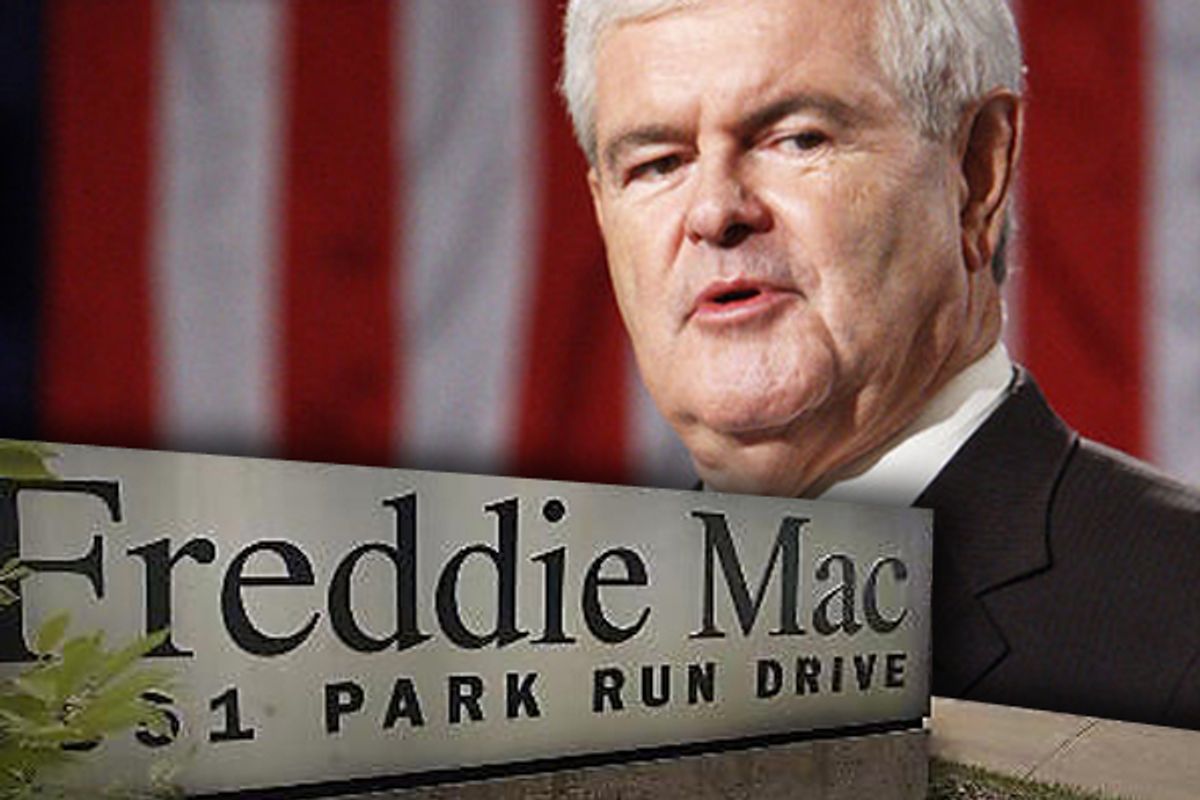 I bet, when he launched his presidential campaign in what I still assume was primarily an attempt to embarrass those who said he'd never actually do it, that Newt Gingrich did not think his greatest liability would be consulting for the Federal Home Loan Mortgage Corp. No, he surely assumed it'd be the marriages, adulteries and divorces. Or even the climate change ad with Nancy Pelosi. But the one attack he has not been able to talk his way out of has turned out to be that he took a great deal of money from Freddie Mac, which, according to Republican lore, caused the financial crisis.

Freddie Mac paid Gingrich's consulting firm at least $1.6 million for his time. Exactly how much -- and how much went to Gingrich -- is still unknown, because reporters haven't seen the contract between Freddie Mac and Gingrich's Center for Health Transformation. Gingrich initially said Freddie Mac refused to waive a confidentiality agreement that would allow him to release the contract. But:

Freddie Mac officials said last week that Gingrich was “welcome” to release the contract, under which his consulting firm was paid at least $1.6 million over eight years for his services.

So Gingrich said it's up to his partners at his former firm to release it. For some reason, a lawyer for Center for Health Transformation is still blocking the release. He wrote to Bloomberg News:

Even though Freddie Mac is willing to allow the document to be made public, allowing a release of the documents in this case might put the confidentiality of other Center for Health Transformation clients at risk, said Stefan Passantino, an attorney representing the firm.

“The risks of any kind of confidentiality waiver, even if the company tried to limit it to one client or one document, are too great to be feasible,” Passantino said in an e-mail yesterday. “A limited waiver is not possible and I am unable to authorize such a release.”

It's just too risky! Other clients may accidentally waive their own confidentiality agreements and the world will learn how much Newt Gingrich bilked them for. Releasing just one specific document relating to one specific client could put the entire world at risk of an EMP strike, too. You can't be too careful.

Gingrich is in the midst of his spite-driven campaign death spiral at the moment but he's still loudly defending himself against the charge that he actually did what Freddie paid him to do, because that would, in the GOP interpretation of history, make him responsible for the entire recession.

Fannie and Freddie by no means "caused" the crisis -- they entered the subprime game extremely late, the worst loans were made by the private sector, and the securitization of bad mortgages was the work of wholly Wall Street wizards -- but the right-wing line against them has a grain of truth to it. Democratic insiders controlled Fannie and Freddie, and Fannie in particular threw money and favors at politicians in order to avoid facing or complying with tougher regulations (just like wholly private corporations do every day).

But the Gingrich role in this rankles the GOP in particular because it means they can't simply blame Barney Frank and Barney Frank alone for the financial crisis. Gingrich was on the payroll to perform outreach to Republican lawmakers. The point of the influence-buying game is that it works best when it's bipartisan.

Gingrich's job was to get Republicans on board with the profit-maximizing strategies of the GSEs, and his own former chief of staff was Fannie's senior vice president for regulatory policy (i.e., lobbying for looser regulations). No one could've predicted that they'd need the GSEs to be a handy scapegoat a few short years later.