The new WH Chief of Staff and Citigroup 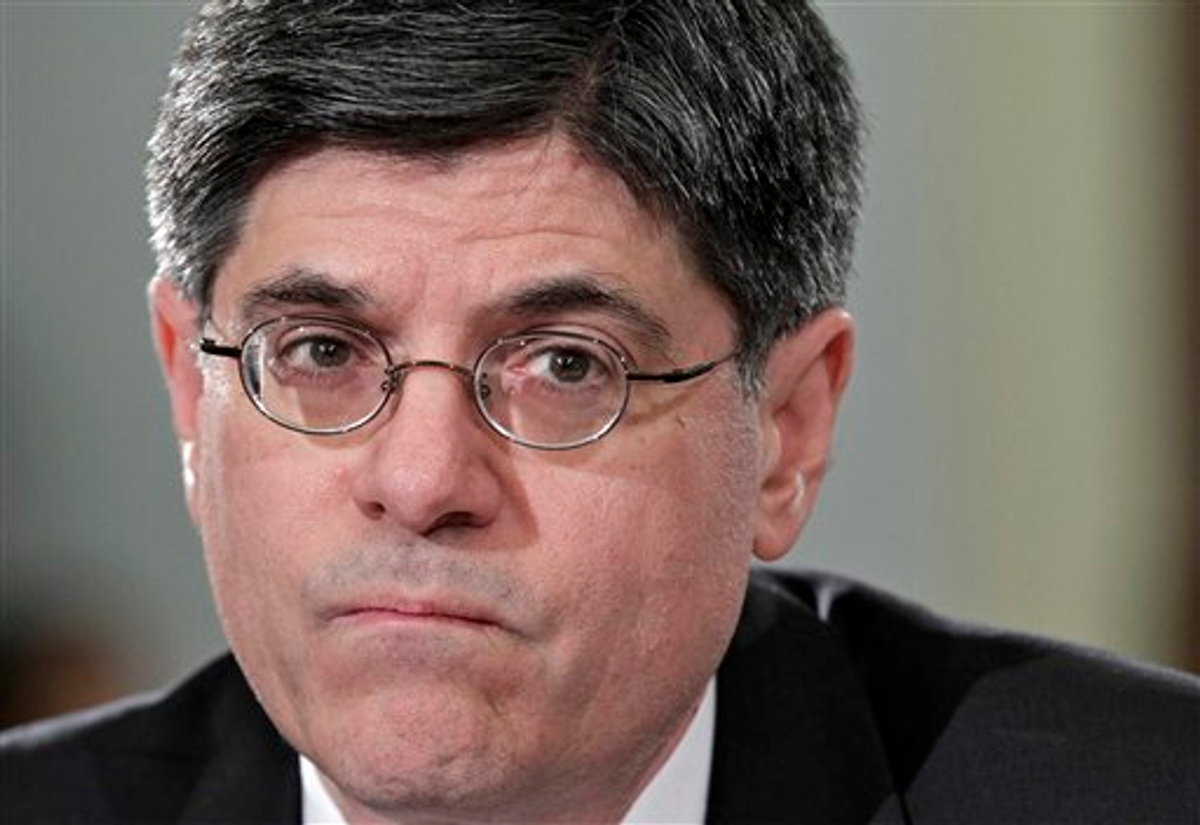 When President Obama last January announced the departure of Rahm Emanuel as White House Chief of Staff, many liberals were furious that his replacement was the Midwest Chairman of JP Morgan and Boeing Director William Daley, who was also an opponent of the Consumer Financial Protection Bureau and a critic of Obama's health care bill as too leftist. As but one example, Rachel Maddow harshly condemned the choice, noting Daley was a hedge fund manager and "business lobbyist" and "is known for pushing Democrats toward business interests"; said "liberals are banging their heads against the wall as they try to comprehend this choice"; and then sardonically observed: "mmm - a banker and a lobbyist: smells like change."

Yesterday, the White House announced Daley's departure -- he will now co-chair Obama's re-election campaign, which basically means raising huge amounts of money from his Wall Street friends -- and unveiled his replacement as Chief of Staff: Jacob Lew. In 2010, Lew became head of the Office of Management and Budget when Peter Orszag left and then, a couple months later, accepted a multi-million dollar position as a high-level Citigroup official. Lew has spent many years in various government positions, but he has his own substantial ties to Citigroup. Here is what Lew was doing in 2008 at the time the financial crisis exploded, as detailed by an excellent Huffington Post report from last year:

[Lew] oversaw a Citigroup unit that profited off the housing collapse and financial crisis by investing in a hedge fund king who correctly predicted the eventual subprime meltdown and now finds himself involved in the center of the U.S. government's fraud case against Goldman Sachs. . . .

[I]t is his few years at Citi -- in particular the one year he spent at its then-$54 billion proprietary trading, hedge fund and private equity unit -- that's likely to raise the most eyebrows in the coming weeks as Lew faces a Senate confirmation hearing.

Especially his unit's investments in a hedge fund that bet on the housing market to collapse -- a reality suffered by millions of American homeowners.

In particular, the Citigroup fund run by Lew, Citi's Alternative Investments, invested heavily in the hedge fund of John Paulson, "who made billions off the deterioration of the housing industry by making bearish bets on securities tied to home mortgages -- particularly subprime home mortgages." One of Paulson's largest bets at the time involved Goldman Sachs, which the SEC has now charged with "defrauding investors by creating and selling exotic securities tied to subprime home mortgages in 2007 without disclosing that they were handpicked by a hedge fund [Paulson] that was betting on them to fail."

Although these bets turned a profit for Citigroup as the housing market collapsed -- a collapse that led to the foreclosures of millions of Americans' homes -- Lew's unit "lost as much as billions of dollars in 2008 as its bets turned sour. In the first quarter of 2008 alone the unit lost $509 million; the company stopped publicly disclosing the unit's individual numbers soon thereafter, but the part of the company that absorbed Alternative Investments lost $20.1 billion in 2008, according to the bank's filings with the Securities and Exchange Commission." As a result of that and other losses, Citigroup received $45 billion as part of the Wall Street bailout, and also used a crisis-created FDIC program to issue another $64.6 billion in taxpayer-backed debt. All of that led to these comments when Lew was chosen last year to replace Orszag as OMB Director:

Lew's role at the fund is raising some eyebrows among good government groups.

"That sounds pretty nasty, doesn't it?" said Gary Bass, executive director of OMB Watch, a group that monitors the budget office. "Any activity and any player that contributed to the economic calamity needs to be looked at.

"We already got enough players in this administration that certainly were key players in the economic malaise that we currently have," Bass continued. "Why shouldn't we have another one?" he said with a slight chuckle.

For his work at Citigroup, work that included betting on the housing collapse, Lew received a salary of $1.1 million. After Citigroup received its $45 billion taxpayer bailout, Lew -- two weeks before joining the Obama administration -- received another $900,000 from Citigroup as a bonus. This was revealed only in 2010; in 2009, when Lew first joined the administration as a State Department official, both he and the administration refused to say if he had received a post-bailout bonus from Citigroup (at the time, there was a huge political scandal over Wall Street executives receiving large bonuses despite needing taxpayer bailouts). There's certainly nothing illegal about betting on a housing market collapse, but it's quite symbolic that those who made millions of dollars from the crisis are now running government policy.

Lew (like so many key Obama officials) also participated in the orgy of Wall Street de-regulation that took place in the 1990s when he served as Clinton's OMB head; after leaving Citigroup to join the Obama administration, he unsurprisingly said in response to questioning from Sen. Bernie Sanders that he does not believe deregulation contributed to the financial crisis.  The New York Times today says that Lew "has built a reputation as a pragmatic liberal who believes Democrats must compromise with Republicans on long-term deficits in order to forestall draconian cuts to entitlement programs like Medicare and Social Security." The Washington Post's Ezra Klein was a bit more blunt: Lew "has emerged as one of the members of the Obama administration Republicans prefer working with." Whatever else one might want to say, Lew, a fairly standard-issue Democrat with less of a "centrist" reputation than Daley, is a perfect fit for this administration.

So the first White House Chief of Staff, Emanuel, not only built a Democratic majority in the House by supporting corporatist Blue Dogs over progressive challengers, but himself got rich when he left the Clinton White House to join a Chicago investment bank and made "more than $18 million in just two-and-a-half years, turning many of his contacts in his substantial political Rolodex into paying clients"; thereafter, Emanuel worked hard in the House on behalf of the hedge fund industry and -- unsurprisingly -- "was the top recipient in the House of Representatives of campaign contributions from hedge funds, private equity firms and the wider securities and investment industry during the 2008 election cycle." The second Chief of Staff was JP Morgan's Daley. And now the third is Lew.

All of this reflects what Matt Taibbi meant when he wrote last week that "once the primaries are finished, we’re going to be left with one 1%-approved stooge taking on another" and that the election will present "a choice between two different versions of the status quo." Moreover, the 2008 financial crisis is the new Iraq War: it does not matter how prominent a role someone played in enabling it, or how much they profited from it, or how centrally they were part of the corrupted machinery that brought it about. If they have the right ideology and good standing in Washington circles, all is forgiven and they do not suffer any consequences at all, even reputationally. Indeed, not only is it no impediment to their advancement, but it's actually an asset.

The General Accounting Government Accountability Office this week issued a report criticizing the Treasury Department for incomplete and misleading press releases designed to make the results of the TARP program look better than reality warrants. In particular, "GAO’s analysis of Treasury press releases about specific programs indicate that information about estimated lifetime costs and income are included only when programs are expected to result in lifetime income"; "however, press releases for investments in AIG, a program that is anticipated to result in a lifetime cost to Treasury, did not include program-specific cost information." In other words, Treasury loudly touts in its Press Releases when it makes money from TARP, but excludes the losses. For more on the now-ossified claim that TARP was a profit-generating success, see the always indispensable Dean Baker.

On a different note: Falguni Sheth is a Professor of Philosophy and Political Theory at Hampshire College. She has written a comprehensive response to Katha Pollitt's Nation piece on progressives and Ron Paul that, among many things, wildly distorted what I wrote. But addressing Pollitt's distortion is the least important and interesting point in Professor Sheth's essay, which I really encourage everyone to read.

UPDATE: The History Professor and cartoonist James MacLeod summarizes this development this way: