Attacks on Romney's Bain career backfire with Limbaugh and party leaders, but they could still resonate with voters 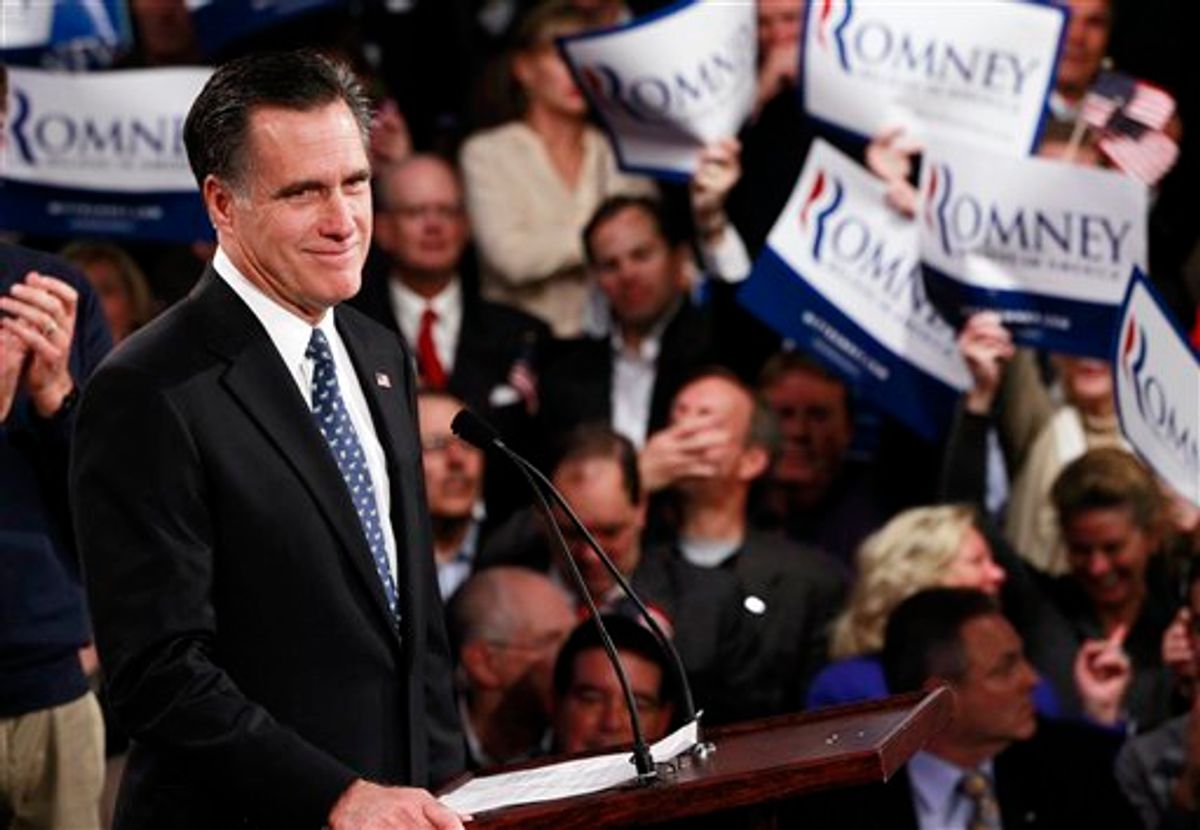 I've got to admit it: Liberals are at a disadvantage when it comes to judging where the GOP primary is headed. Last week I was sure that conservatives were settling on Rick Santorum, and his supposed blue-collar family values, as the official not-Mitt Romney candidate after his strong Iowa showing. Not quite yet. Sunday I was sure Newt Gingrich's slashing "King of Bain" ad, attacking Romney as a looter and a job destroyer for his Bain Capital record, would be devastating in a country where the economy is the top issue and unemployment remains high.

It was devastating, all right. To Gingrich. The former House speaker got a beatdown from fellow conservatives this week, with Rush Limbaugh mocking him as an Occupy Wall Street supporter and the National Review harrumphing at the notion that Gingrich targeted Romney's Bain success because he "apparently expect(s) Republican voters to regard that as a liability." By the time he made his "I'm tied for fourth place!" speech in New Hampshire Tuesday night, Gingrich looked broken. He abandoned his slashing attacks on Romney's career and stuck to decrying the "years of decay" under President Obama, recounting his alleged successes as House speaker in the '90s, and rambling wearily about "innovation." A few minutes later, over on Fox, a disapproving Sean Hannity smacked sixth-place loser Rick Perry for his attacks on Romney, and echoed Limbaugh's sneering comparison with Occupy Wall Street ideology.

It's an interesting moment. Multiple news organizations reported that even close allies are telling Gingrich to cut out the attacks on Romney, but he's already purchased an estimated $1.5 million in South Carolina airtime for his "House of Bain" spots, plus a nasty ad claiming Romney had "governed pro-abortion" in Massachusetts. What's Gingrich going to do? He hates Romney, but he loves predatory capitalism as much as Limbaugh does. He doesn't believe his own Bain Capital attacks. Can he continue to hurt Romney without damaging his own chances to return to the right-wing gravy train when he goes down to defeat? Trust me, the monied interests are not interested in hiring anti-capitalist "historians" to not-lobby for them. Gingrich is torn between vengeance and greed. Sucks to be him. Fun to watch.

It's also fun to watch conservative Republicans rally around Romney not because they like him but because he's become the face of the hallowed free market.  As he headed to conservative South Carolina, hotbed of Tea Party radicalism, Romney got a boost from its extremist Sen. Jim DeMint, who predicted the former Massachusetts governor would win the Jan. 21 primary. DeMint is staying neutral, he told radio host Mark Steyn Tuesday night, "because Republicans are not yet united and I want to focus on the Senate." But he praised Romney's victory speech for "hitting a lot of the hot buttons for me about balancing the budget," adding "Frankly, I’m a little concerned about the few Republicans who have criticized some of what I consider free market principles here." He went on: "Some of the others who might have had an advantage here have really crossed paths, crossed ways with some Republicans as they have criticized free enterprise concepts.” DeMint's remarks could give other Tea Party leaders an excuse to back Romney, though they don't trust him, in the name of defending capitalism.

I still think there's a possibility the Bain attacks will resonate with some Republican voters, and maybe in South Carolina, which has a 9.9 percent unemployment rate, compared to under 6 percent in Iowa and New Hampshire. It's possible Gingrich and Perry's attacks will open up political space for Santorum, who's been careful not to attack capitalism as he sticks to his blue-collar platitudes and culture-war campaign. It was great to see New Hampshire voters chasten Santorum by repeatedly challenging his homophobia in public forums and giving him a fifth place finish. But his campaign told the Huffington Post he'll spend at least $1 million on advertising in South Carolina. Maybe he's still got a chance.

It's a tiny one. Super PACs connected to Romney are set to spend $6 million in South Carolina and Florida in the next three weeks. Meanwhile, as every non-Romney candidate vows to head to South Carolina, they split the conservative vote and increase the chances that Romney gets the victory. Perry claimed he's soldiering on. So did Jon Huntsman, despite a third-place showing that wasn't enough to make him a serious candidate, since he bet everything on New Hampshire. "Third place is a ticket to ride, ladies and gentlemen," Huntsman told the crowd, but nobody believes that. Late Tuesday night, Huntsman's father and financier reportedly hadn't decided whether to keep bankrolling his son's bid. (And people mock Romney for his wealth.)

If it weren't for Ron Paul's foreign policy views, we might be talking about whether conservatives could coalesce around his candidacy. He underperformed expectations in Iowa but he came in a strong second Tuesday night. As much as I loathe his domestic politics, I enjoyed hearing the crowd chanting "Bring them home" when he promised to get troops out of Afghanistan. Paul will stay in the race and, given his caucus strategy, he could rack up delegates. I don't know where that will take him – is he dreaming of Vice President Rand Paul? – but it's great to think about the Ron Paul crowd heckling Mitt Romney when he doubles down on his hawkish, expansionist foreign policy promises in Tampa.

Romney's heading into a scorched-earth South Carolina primary, but he's got to be feeling pretty good about his first two outings. In New Hampshire, he won the ultra-rich, of course, but he also got Tea Party members and evangelicals, according to exit polls. He gave a much better victory speech than he did a week ago, because this time he used his teleprompter. He hit not only Obama but his Republican rivals for practicing "the bitter politics of envy," which has more zing than the standard GOP class warfare line.

The private equity mogul can't understand that criticism of his Bain career -- "restructuring" companies, cutting their workforce and forcing almost a quarter into bankruptcy -- isn't about jealousy, but justice. People are starting to understand that finance capitalism works for the top 1 percent, but not the rest of us. So while Gingrich's attacks aren't likely to help his candidacy, they're a boost to the man he presumably wants to defeat more than Romney. President Obama has to look forward to running against a guy his GOP rivals called a looter and a vulture capitalist. The fact that all of those rivals are fighting on after New Hampshire helps Romney win the nomination, but it could also help the Democrats hold the White House.