The hell that now awaits Mitt

Romney's prize for winning New Hampshire: A lavishly funded assault in the capital of the Tea Party 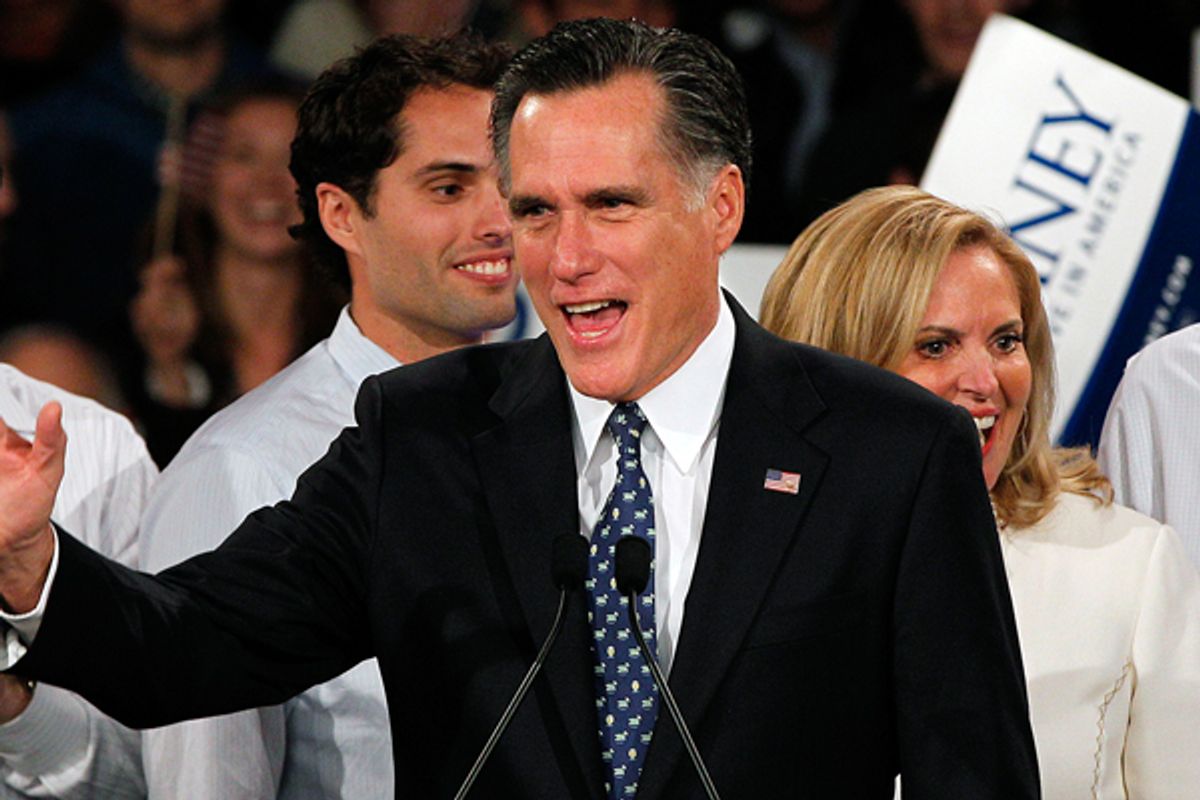 MANCHESTER, N.H. -- Mitt Romney got everything he could have hoped for out of New Hampshire on Tuesday night.

He won decisively, improved on his 2008 showing in the state, and was declared the winner very early in the night, allowing him to deliver a triumphant, Obama-bashing speech in front of the largest possible television audience. He also neutralized a potential threat, Jon Huntsman, who failed to post the breakout performance he was counting on and who may not be long for the race now, and saw the two candidates vying to serve as the right's default anti-Romney candidate -- Newt Gingrich and Rick Santorum -- finish in a virtual tie for a distant, meaningless fourth place. Oh, and he can also now boast of an achievement that has eluded every other Republican presidential candidate in the modern campaign era, including Ronald Reagan: the Iowa/New Hampshire one-two punch.

Romney's reward for all of this: 11 days of political hell, starting first thing tomorrow morning and lasting until the polls close in South Carolina two Saturdays from now. The Palmetto State's primary is the test that the former Massachusetts governor's nomination ambitions have been building toward for years.

On paper, the state embodies all of the demographic realities and intraparty dynamics that have made him such a tough sell to the party base. If Romney's Mormonism really is a deal-breaker with the religious right, we will find out. About 60 percent of the state's GOP primary universe is composed of evangelical Christians, a group that Romney has struggled with in both of his presidential campaigns. The state is also the unofficial capital of Tea Party Republicanism, with its emphasis on ideological purity and intense suspicion of the party establishment. Romney, with his economically moderate past and reputation as the "next in line" guy, reeks of the type of Republican South Carolina conservatives turned on in 2010. His Yankee roots surely don't help, either. No wonder Romney won just 15 percent in the state in 2008 -- by far his worst showing in any early contest that year.

The bigger problem for Romney, though, is that the candidates who will oppose him in South Carolina are desperate -- and at least one of them will be aided by an avalanche of cash.

That would be Newt Gingrich, who it should also be noted is on a personal mission to destroy Romney, payback for the barrage of negative ads that a pro-Romney Super PAC dumped on the former House speaker in Iowa (and that Romney pretended, unconvincingly, to know nothing about). Gingrich will head to South Carolina intent on exploiting every one of Romney's vulnerabilities in the state, and he'll be aided by at least $5 million from a casino magnate, Sheldon Adelson, who is bankrolling a Super PAC that aims to do to Romney what Romney did to Gingrich in Iowa.

Gingrich is now billing the race as a contest between a "Reagan conservative" and a "Massachusetts moderate," but the heart of his assault (and the Super PAC's assault) will involve Romney's business record. In the past few days, Gingrich has begun blasting Romney as a corporate "raider" who "looted" companies, fired workers and lined his own pockets. The volume of this will now increase radically. It echoes the case that Mike Huckabee, who nearly won South Carolina in 2008, made against Romney back then, when he said that Romney tends to remind people of "the guy who laid you off." It also mirrors the case that Democrats are already making against Romney.

And the Gingrich attacks are just the tip of the iceberg. Rick Perry, who barely registered in New Hampshire, is attempting to make a campaign-saving stand in South Carolina. He won't, of course, but he has plenty of money to burn and he's already using the same script as Gingrich to go after Romney. Huntsman, too, has no chance of winning the nomination, but if he does press on to South Carolina, he and his allies could potentially toss a few million more dollars into the anti-Mitt pot. And while Santorum is vowing not to join the Bain pile-on, he's just as desperate as Gingrich and the others to stop the Romney train, meaning that he can be counted on to play up any potential vulnerability that Romney has with the Christian right (and there are many of them).

Romney enters South Carolina as the favorite. A poll last week, just after Iowa, put him at 37 percent, his best showing of the entire campaign and nearly 20 points ahead of the next candidate. The numbers showed that Romney is very capable of winning the state, especially if the rest of the field remains split (Santorum finished second in the poll with 19 percent, while Gingrich was at 18 -- meaning that together they accounted for the same share of the vote as Romney). But the numbers also came with a giant asterisk: Millions and millions of dollars in vicious attack ads aimed at reminding South Carolinians of all of the many reasons they have to be suspicious of Romney had not yet run.

Those ads will hit the airwaves tomorrow and won't stop until the 21st. Romney may still emerge with a victory, and thus the nomination. But it's not going to be pretty.