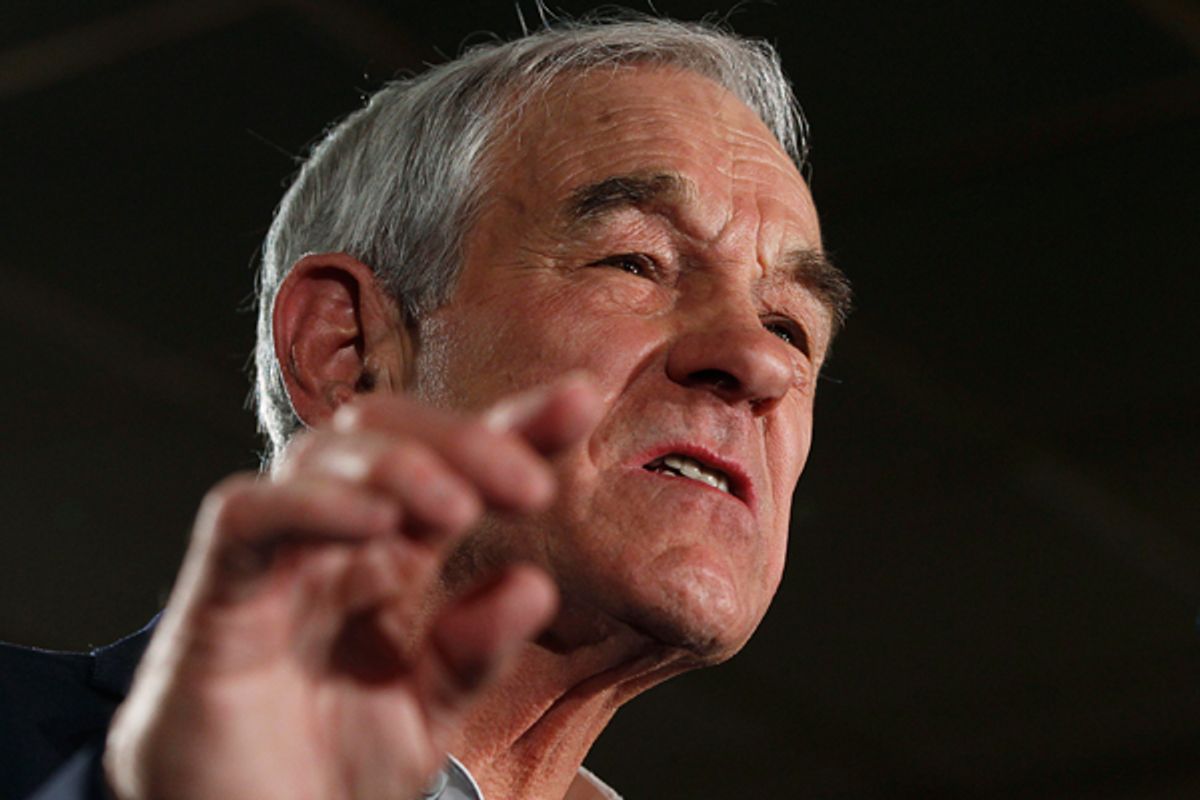 Hey, sailor, just how strange a political bedfellow have you got in mind?

That’s the question raised by the suggestion in certain quarters that the real progressive in the 2012 presidential contest may be Texas Rep. Ron Paul. Democrats who fail to acknowledge this brilliant insight are alleged to be either blinded by partisanship or actively in league with that warmonger and baby-killer President Obama.

The latest rationalization by Salon’s David Sirota involves distinguishing between the powers of the president as commander in chief and those requiring the cooperation of Congress. That President Paul would move to abolish Social Security and Medicare and repeal the Civil Rights Act of 1964 isn’t supposed to matter because he couldn’t do so unilaterally, while President Obama could presumably ignore the War Powers Act (as some allege he did in Libya) plunging the nation into war “with the stroke of a pen.”

Of course, so can any president. But hold that thought.

Meanwhile, anybody who questions the character and judgment of a politician who until fairly recently peddled “The Original Famous Ron Paul Survival Kit” in his eponymous newsletter isn’t playing fair.

How it worked was you sent them a check or money order in (doomed) U.S. currency, and they sent you a WWII Army ammo box filled with silver coins for "hand-to-hand" commerce after U.N. troops have seized control of the United States. Back when I was a lad, you could only get bargains like that from tiny ads in the back pages of DC Comics.

But I digress. Hasn’t the Great Man renounced the race baiting and conspiracy mongering in the newsletter he supposedly never read?

But at least one aspect of the pro-Paul argument is worth unpacking further if only to show why embracing his candidacy is such a terrible idea. I take Glenn Greenwald’s point that nobody ever gets exactly what they want in a political candidate. To anybody not completely blinded by partisanship, there are always tradeoffs to be made, tactical silences to be observed, and fools to be suffered, if not gladly, at least without rancor.

To me, at least, the futile and destructive Drug War is one such. It’s like Roaring Twenties all over again, only worse. Alas, no Democrat, and certainly no black or Latino Democrat, can afford to touch it. So Obama gets a pass.

Anybody who tries can probably come up with a dozen examples of his own. Sometimes, you’ve just got to hold your nose and vote.

But let’s talk war and peace, as Paul boosters insist.

Recently, I wrote about Paul’s apostasy regarding Iran. In a GOP debate, Paul aptly compared election-year bombast about the alleged Iranian nuclear threat to the 2003 propaganda campaign that drove the U.S. to invade Iraq.

Numerous Paul loyalists angrily seconded the motion. “Have you ever questioned,” one wrote, “why Jews pop up in every major national swindle and tragedy:  9/11, TARP, Wall Street swindles, AIPAC, illegal wars, Goldman Sachs, The FED, ADAA, financial crises, etc?  It is not a real conspiracy because they are doing it in plain sight … I think you are either a traitor or just another dumb American.”

Nice, huh? While he’s often cagey about how he expresses it, Ron Paul’s whole history as a conspiracy theorist is right out of the “Protocols of the Elders of Zion” -- the 19th century forgery that’s kept anti-Semites buzzing for generations.

Here’s a second thinker in the Paul tradition: “Zionists dominate many of the world's centers of power, wealth, and media … plundering the wealth and assets of nations … depriving peoples of their freedoms and destroying their cultures and human values by spreading their nexus of corruption.”

Reader Mel Birge of Portland, Ore., argues that’s precisely why Paul makes such a terrible spokesman. Complaining of “sitting in synagogue for the last dozen years listening to pseudo Middle East experts give the same frantic talk about the danger of Iran nukes and how the U.S. must stop it,” he believes such a war “is no way in the United States' interest.”

But he also thinks Paul’s “anti-Semitic paranoia allows AIPAC, the neocons and their fellow travelers to paint the entire Iran war opposition with the Ron Paul brush. That's the danger of Ron Paul that you should speak of:  He snuffs out substantive discussions on Iran.  The media feasts on him and the neocons love it because he's his own straw man.”

However, Birge also wonders, “Where's Obama saying, ‘I was elected on getting us out of Middle East wars. I'm not starting another’?”