The Oscar nominations we're hoping for

As the first round of voting closes, a final push for Kirsten Dunst, Vanessa Redgrave and other deserving nominees 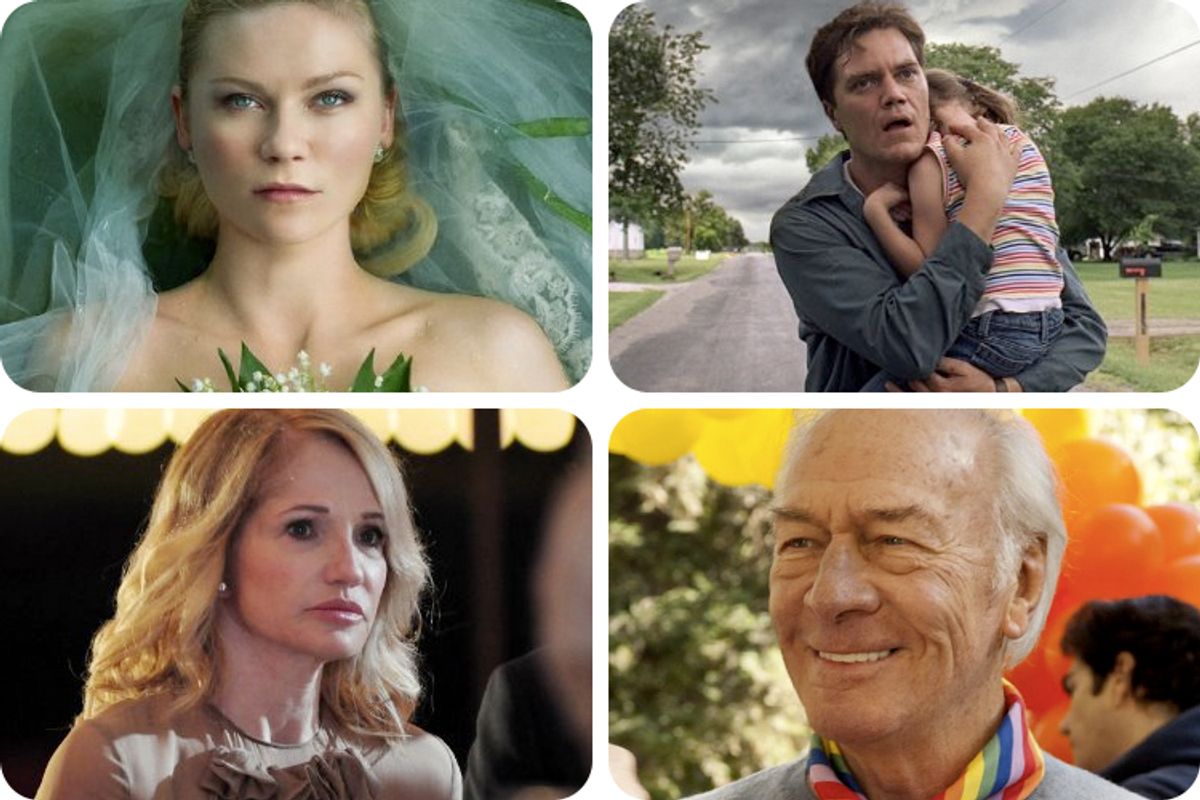 With the first round of Oscar voting about to close, and the announcement of this year's Academy Award nominees set for the morning of Jan. 24, those of us who follow this circus -- in spite of our better judgment, perhaps -- are still hoping for miracles. Now, it's one thing for me to offer a whole bunch of subjective blather about what I think the best films of the year are (and, let's face it, I've spent the whole year doing that). It's quite another to suggest things that lie within the penumbra of plausibility -- award candidates Academy voters might just consider, should their leathery souls be touched by the better angels of their nature.

That's the assignment for today: Films, filmmakers and actors who clearly deserve awards consideration, who would definitely receive it in a universe superior to this one, and who still have some kind of shot even in the cold, hard world of reality. If you're warming up your comment-writing fingers to accuse me of elitist snobbery, please note that we are not discussing films or actors that probably or certainly will be nominated, no matter how deserving they may be. I'll be as happy as a Pismo clam dressed in lemon butter to see George Clooney and Brad Pitt get their best-actor nominations this year; they were both terrific. But I won't pretend to be surprised. (Ditto for Meryl Streep, Michelle Williams, Albert Brooks, Terrence Malick, Martin Scorsese, and so on.)

If anything, these are the potential nominations I once thought were likely, and now seem to be slipping away with the melting sands of pop-culture time. It's like that scene on the Great Beach of the Hereafter at the end of "Tree of Life"! Allow me to treasure these possibilities a few days longer -- and please, share your own lists and castigate me for the unforgivable omissions.

Ellen Barkin, "Another Happy Day" This mean-spirited family comedy from writer-director Sam Levinson (son of Barry) was a classic 'tweener, too indie for mainstream audiences and too conventional for the art-house crowd. I, for one, really liked it -- and thought it was the ideal comeback vehicle for the 55-year-old Barkin, who gives a blistering, hilarious and profoundly compassionate performance as the screwed-up mom at the story's center. Apparently no one else cared. But this is Oscar-worthy acting if I've ever seen it, daring, risky, vulnerable, free of shame or fear. If I can't win over the Academy, maybe I'll convince you to check out the movie (and also Barkin's awesome Twitter feed).

Kirsten Dunst, "Melancholia" I get why the Academy is never really going to honor Lars von Trier for anything (even bracketing his ill-advised attempt at Nazi-related humor), and I'm pretty much OK with that. Hollywood cinema and von Trier's brand of confrontational art-house fare are really different categories, like pickles and peanut butter, and they don't belong together. But "Melancholia" is A) a spectacular achievement, and B) as close to a mainstream crossover as he's likely to come. It also features a major Hollywood star in a luminous, courageous performance where she pees on a golf course, has sex with a stranger, suffers a terrible nervous breakdown and protects a child from the end of the world. Dunst already won the best-actress prize at Cannes, and an Oscar nomination -- nobody expects her to win -- would be wonderful recognition for this amazing movie. Do the right thing, Hollywood!

Michael Shannon, "Take Shelter" I recognize that Shannon, a 37-year-old character actor with dozens of film and TV roles on his résumé, is not to everybody's taste. He often plays unstable villains or heavies, and while I almost always find him enjoyable, he has a reputation for chewing the scenery. In both "Shotgun Stories" and the apocalyptic Middle American weather thriller "Take Shelter," indie director Jeff Nichols has found a way to harness Shannon's immense power, and this titanic, slow-burning performance as an Ohio construction worker battling troubling visions and a possible psychotic breakdown is the best work of his career. For my money, in fact, "Take Shelter" was the American film of the year, but Shannon (wonderfully supported by Jessica Chastain, who plays his wife) is its face, its heart and soul.

Vanessa Redgrave, "Coriolanus" On this one, Academy members, I'm drawing a line in the sand. Did you actually watch Ralph Fiennes' terrific adaptation of Shakespeare's bleakest tragedy all the way through? If you fell asleep with a glass of sherry, start over again! If you did, and you saw 74-year-old Vanessa Redgrave as the terrifying Volumnia, the mother who would rather see her son come back dead from the war than not go at all, and you did not realize that this was one of the greatest Shakespeare performances ever committed to film, then I don't know what to say. Mail me your card so I can publicly humiliate you, and perhaps God will forgive you. I can feel, dammit, that the Academy's going to ignore Redgrave -- because she's a notorious commie who might say something inappropriate, because it's Shakespeare but the depressing kind, not the funny, sexy, dress-up kind -- and it makes me feel like the guy in "Office Space" with the stapler problem. I'm going to burn all your houses down. Metaphorically, of course.

Christopher Plummer, "Beginners" In fairness, this one is still pretty likely. The supporting-actor category doesn't feel overcrowded this year, and while Albert Brooks' creepy-hilarious turn as the sinister Jewish gangster in "Drive" is getting most of the love, Plummer is a well-respected figure who has never won an Oscar (and only got his first nomination two years ago, for playing Tolstoy in "The Last Station"). His funny, relaxed and irresistible performance here as Ewan McGregor's 70-something gay dad, who comes out and embraces his new identity with awkward but endearing enthusiasm, demonstrates how much better the great Canadian thespian has become on-screen in his senior-citizen years. (As a younger man, he had the Olivier-Burton hambone syndrome.) This is also the easiest way for the Academy to honor Mike Mills' magical "Beginners," which is both a sweet-tempered love story and also the most loving and generous film about homosexuality ever made by a straight person.

Ralph Fiennes, "Coriolanus" You can see my remarks above about Vanessa Redgrave's performance, which is only the most conspicuously great element about the blistering contemporary spin Fiennes and screenwriter John Logan put on the Bard's dark-hearted tragedy about political authority, the war between the masses and the elites, citizenship and betrayal, mothers and sons. Fiennes himself plays the inscrutable Roman general at the heart of the story, but allows himself to be upstaged by a brilliant cast that features Gerard Butler, Brian Cox and Jessica Chastain -- and by the haunting sense that the discord Shakespeare saw in the early 17th century is still with us today.

Nicolas Winding Refn, "Drive" I'm prepared to debate many aspects of the Euro-American crime-movie meets art-film hybrid "Drive," from its performances to its morality or lack thereof. But in terms of its economical and beautiful construction, it might be the best directed picture of the year. Watch the blend of light and sound, choreography and camera movement, in that romantic-violent elevator scene, the one that encapsulates all the film's themes into a few seconds, with no dialogue. And then tell me that Nicolas Refn -- who, yes, needs to dial back the coolness quotient a little -- doesn't deserve his genius reputation. I'm almost sure this one won't happen; the critical hype for "Drive" really did damage to both its box-office returns and its awards potential. But the movie's still great!

Manuel Alberto Claro, "Melancholia" This category can offer the Academy a way to honor arty-flavored films it really doesn't know how to address, and in this case that's fully appropriate. Shooting with cutting-edge digital cameras, Claro managed wildly disparate moods and textures in "Melancholia," from the hand-held, wedding-video first half to the spectacular, CGI-enriched images of its apocalyptic conclusion. (And then there's the special camera used to shoot the slow-motion images of the movie's memorable prelude.) Collaborations between directors and cinematographers are difficult to judge from the outside, but I think von Trier's decision to shoot with Claro instead of longtime crony Anthony Dod Mantle was a key factor in the aesthetic shift that produced this masterpiece. (Emmanuel Lubezki also deserves a nomination in this category for Malick's "Tree of Life," but that's considerably more likely.)

"Miss Bala," directed by Gerardo Naranjo (Mexico) The Academy's foreign-film awards have a long and dreary history of rewarding feel-good pictures that almost no one wants to see, and ignoring what's actually going on in world cinema. (Mind you, I'm not dissing this year's presumed front-runner, the Iranian drama "A Separation," which is one of 2011's best films.) That problem is much larger than we can address here, and has a lot to do with the Academy's idiotic rules, but never mind. American-educated hotshot Gerardo Naranjo's relentless action film, about a Tijuana beauty queen caught up in a gang war, offers a chance to make amends. You can watch "Miss Bala" purely as a brilliantly engineered crime thriller, but it's hard to avoid the portrait it paints of a profoundly dysfunctional Mexican society, where ordinary people's lives are subject to the whims of drug lords, corrupt cops and American drug-enforcement cowboys who cross the border with impunity.