The recipe for security 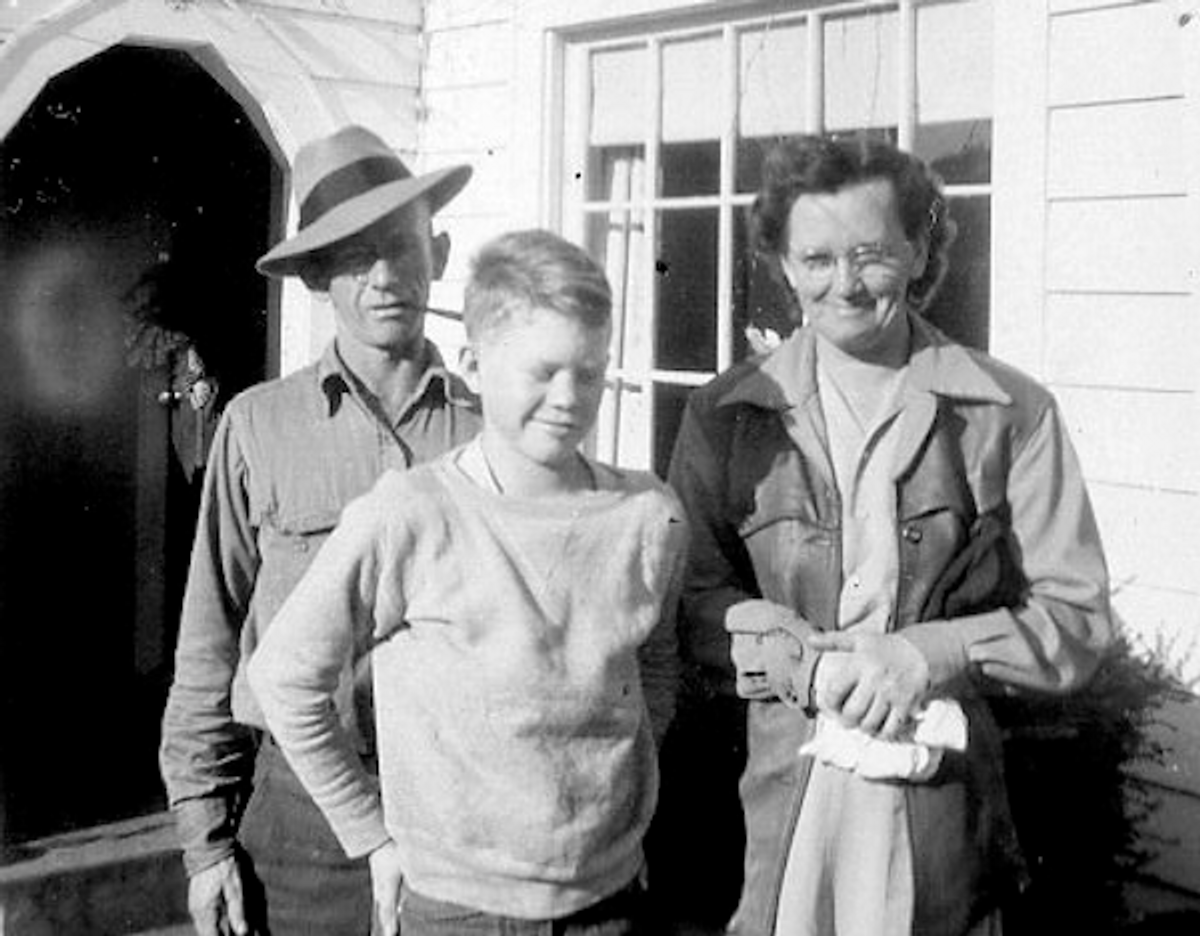 Jan's grandparents, Opal and Paul, with her father, Jerry (Courtesy of Jan Kinney)
--

The house is big and heavy-timbered, with log supports and ceiling beams hewn from trees that once grew nearby. Inside, there is chatter and light and the hiss of boiling grease; outside skeins of cloud settle over a dark winter forest.

Jan stands at the wooden kitchen island. She cuts neat circles from a rectangle of flattened dough. She is thin, with short graying hair and blue eyes that are at once friendly and shrewd. Her three granddaughters run screaming loops through the kitchen, and guests cluster around the bar inspecting the cocktail selection, but Jan seems unflustered by the crowd. She passes a platter of uncooked doughnuts to her son-in-law Lou, who mans a stock pot of bubbling oil.

As a general rule, I do not like doughnuts, but I make an exception once a winter. I’ve been attending the annual Kinney doughnut party since I was a kid. But it’s not just nostalgia that compels me to eat Kinney doughnuts -- the powdered confections are piping hot, with a texture that is at once pillowy and chewy. I wash down a chocolate-filled doughnut hole with a French75, and the winter months ahead seem to promise cozy cheer instead of dreary gloom. As Jan’s granddaughter Opal chases past me, I think of parties in this house when I was little, of eating doughnuts till I was sick, and of the year it actually snowed and a fantastic wooden toboggan materialized. I remember, as I often do, Jan’s son Japhy, who was two months older than me and a hero of my childhood.

A few days after the party, Jan and I meet so that she can tell me more about the doughnut recipe’s background, about her grandparents, who migrated west in a Model T Ford loaded with all their earthly possessions. The plan is to walk while we talk. We drive to Jan’s favorite hiking spot in my car, a decrepit ’92 Honda Civic with no exhaust system to speak of. I’m a little embarrassed because Jan is a neat and orderly and extremely functional person, and the car is anything but. I’ve cleaned it up a little in her honor, but it’s beyond hope -- the floor is covered in a thick layer of pine needles and dust. Jan is not surprised, of course. She’s known me all my life and views my foibles with a wry and expectant eye.

We park at the foot of a logging road. As expected, Jan exclaims about my inappropriate shoes and my hatlessness. Her concern is not unfounded -- rain smatters the steep gravel road. As we ascend into a windy forest of giant firs, Jan recalls her grandparents’ relocation from Kansas to Oregon. 1931 was a hard year for the family: Jan’s grandfather Paul was out of work and his wife, Opal, had just lost a child. “An 18-month old girl,” Jan remembers with a precision that hurts. Opal didn’t want to leave their tight-knit German community, but Paul decided to go west. He’d heard there was work in Oregon. Opal acquiesced.

“There were two kids and two adults and she was massively pregnant with a third kid,” Jan says. “They packed the family and all their stuff into a Model T Ford, and they did not have a trailer. When they came to the mountains they just couldn’t make it up the roads. They had to offload stuff. But even then, the carburetor didn’t work going at a slant and there were areas when they had to put the car in reverse and go up the mountain in backwards. It was just epic. They were like the Joads -- you know, from 'The Grapes of Wrath.'”

Jan remembers her grandmother as neither severe nor especially sweet. “I always look at Grandma as someone who had so much to give to the world. And how could she do that within the constraints of the society at that time is really interesting to me,” Jan says. When I ask her about the basic tenets of Opal’s character, she answers right off the bat: “Opal? Safety, security, order. She was a classic German housefrau in that her house was always clean and orderly and it was important to her that it be that way ... But at the same time she was very creative, which I think is why she was a good cook,” Jan muses. Opal made a point of bringing the kids together for an annual winter doughnut party, an old family tradition. “Always my grandmother’s kitchen,” Jan muses. “For me it was always about safety and security and warmth and acceptance. She liked cooking. She loved the presentation -- the doughnuts were always about presentation, and that came through in how they were cooked. It wasn’t a chaotic scene when we were making doughnuts at her house.”

Jan’s own parents were young and eccentric, sometimes chaotic. Jan was an orderly little girl with a heavy sense of responsibility for her younger siblings. She saw her grandmother Opal as a haven. Although she is thankful that her artistic mother gifted her with an abiding curiosity and a love for reading, Jan looked to Opal for security. She remembers her grandmother bringing the family together through food: making sauerkraut, baking bread, fixing summer dinners bright with garden vegetables, frying perfect doughnuts.

The wind picks up and roils the branches of the great firs. Somewhere in the woods, a branch cracks. A blur crosses our path with the sound of wings beating air. Jan pauses in her story. “For the record,” Jan says, “that was a grouse.” A native of western Oregon, Jan has lived in the Oregon Coast Range for most of her life. She married at age 17 and she and her husband, Ray, moved out to the woods to start a family.

“You know, we moved to Deadwood with the intent of creating and being part of a larger community,” Jan says. She sees parallels between her rural community in Oregon and the community Opal left behind in Kansas. This surprises me because Deadwood, Ore., is an infamous enclave of hippies and rednecks, and Opal came from solid German Lutheran stock. As the forest opens up for a view of the adjacent mountains, Jan illuminates the similarities: Although her grandparents were Lutheran, Jan thinks that to them church was really about community, a gathering spot much like Deadwood’s community center and fire hall. “Their kids grew up with a neighborhood,” Jan says. “The parents remained lifelong friends. Cooking and eating was always at the center of social events. You knew people’s foibles and strengths. You accepted them for whatever, loved them even. There were no secrets, which keeps us accountable ...” Jan now sees Deadwood as an extension of her own family, which is why she includes the community in the doughnut tradition that was once intended for the immediate family.

After Opal moved to Oregon from Kansas, she managed to get a job at the cannery in Eugene. After that she worked as a housekeeper until she was well into her 60s. Even though she was always busy, she took the time to cook and bake from scratch.  From Opal, Jan learned to see cooking as a manifestation of love. She thinks Opal’s fixation with maintaining culinary traditions stems in equal measures from the security of her Kansas community and the uncertainty of her childhood home life.

“She had an insecurity,” Jan says. “When she was 4 or 5, her mother was five months pregnant with her second child, and she developed encephalitis and she died. So grandma lost her mother. Her father couldn’t cope with his wife’s death or with his little daughter, and he farmed her out to his parents. He remarried and eventually took Opal back, but as the much older sibling, she became a caregiver to her father and stepmother’s nine children.” Jan remembers Opal saying that her family never emphasized that she was the half-sister and not her stepmother’s biological daughter.

“So she wasn’t made to feel different?” I ask.

“I think she was, because she said she wasn’t,” Jan says definitely. “Why did she even talk about it if it wasn’t an issue?”

Opal’s story makes me think how our positive aspects are so often shaped in reaction to loss and hardship. In order to survive the vagaries of life, we mimic the people and activities that represent islands of solace. “I think one of the reasons that our family really centered on her traditions was that she was always determined to be the secure, safe person -- and nobody was going to feel left out or abandoned,” Jan says. Opal created the sense of family and security she missed as a child, and Jan continued the tradition.

Jan’s family has now weathered the death of her son Japhy, her own battle with cancer, her husband Ray’s back problems and the rewarding but tumultuous experience of generational cohabitation: Jan and Ray now share their home with their grown daughter Mizu, her husband, Lou, their three little girls, and Jan’s mother, Margie. Food is still an important part of family life. Margie is a master gardener, so they are able to maintain Opal’s tradition of garden vegetables. Jan believes in making things from scratch, and every weekend, she bakes enough bread for the entire family. Like Opal, she struggles to find time for everything:  After starting out as a young general assistant at a local clinic, she has worked her way up from the bottom to become Director of Quality at a hospital, a job that requires a two-hour commute daily. “Director of Quality” is a pretty apt title for Jan.

When I ask Jan her secret for surviving the long hours and the tumult of a large family, she says that her tongue is calloused from biting it, but then admits that her son-in-law probably feels the same way. This year they argued over the doughnut party. Lou wanted to serve cocktails and other types of fried food such as deep-fried cheese curds and calamari. Jan was resistant to modifying her family tradition. Now she concedes that Lou’s idea wasn’t so bad. “Isn’t that how traditions always are? Don’t they always change? For me the nucleus of the doughnuts is the family. And what that family looks like and when it happens ... that’s where all the change happens.”