The end of Tebow! The resurrection of Alex Smith! And more amazing-yet-true tales from the NFL division playoffs 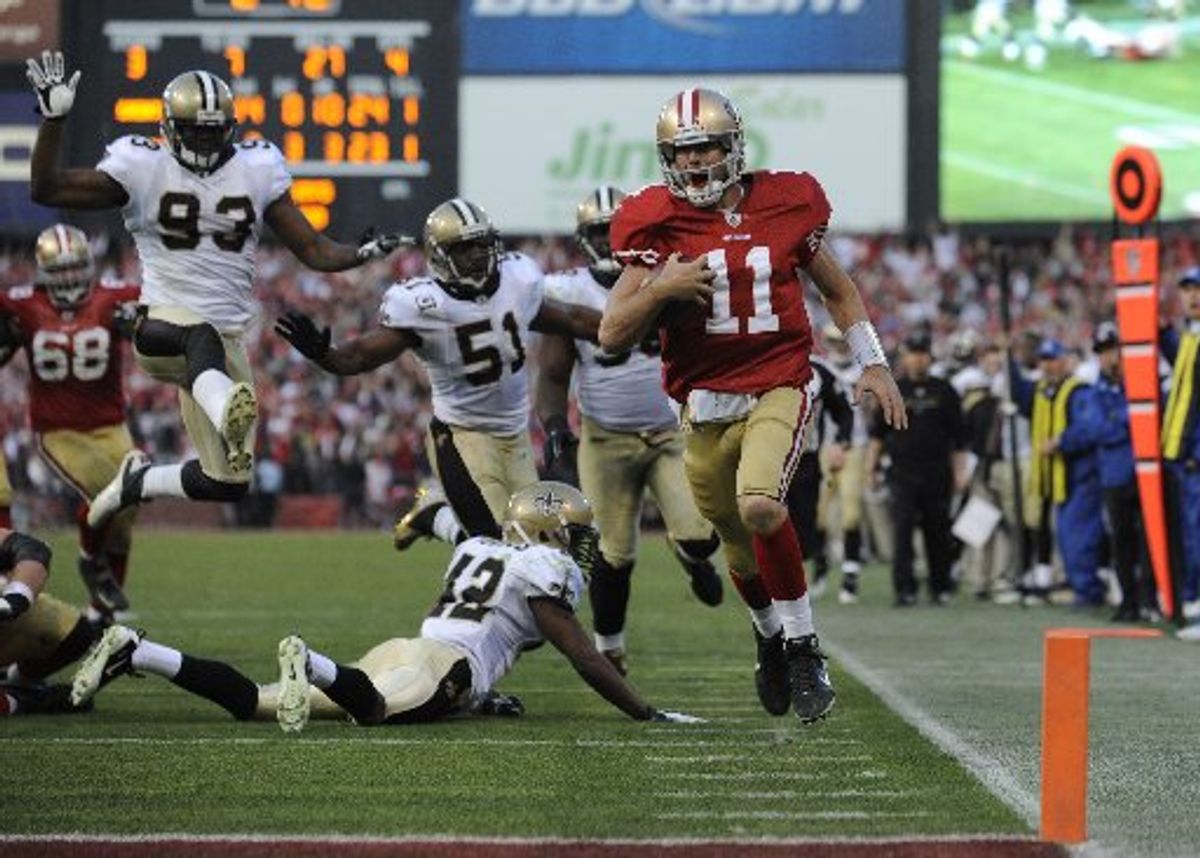 Like campaigning as a right-wing loon in Iowa or taking hallucinatory drugs in preparation for the Bar exam, playoff football is all about peaking at the right time. And after this weekend’s division-round games, all four of the remaining teams in the NFL playoffs can legitimately feel that they have the best shot at winning Super Bowl 46. (Not “XLVI”: I refuse to honor the NFL’s grandiose insistence on using Roman numerals to denote its championship game for the same reason that I refuse to call a small Starbucks coffee a “tall.”)

My team, the San Francisco 49ers, are channeling the ghosts of Joe Montana and Dwight Clark after coming back not once but twice in the last four minutes to beat the unstoppable New Orleans Saints in one of the most thrilling playoff games ever played. (Gloating and hubristic reminder: in my previous piece I called the 49ers to win 30-28. The final score: 49ers 36, Saints 32.)

The New England Patriots have the confident glow of an omnipotent serial killer with a medical degree after they surgically carved up the corpse of the 1958 Nebraska Cornhuskers, aka the Denver Broncos. The contrast between Tom Brady’s laser-like passes and Tim Tebow’s wishful heaves was excruciating, but there could be an upside to Tebow’s abysmal showing: It might switch Tebowmania from Christian triumphalism to Christian humility. (Slightly less gloating but still disturbingly hubristic reminder: I called it 31-17 for New England. The final score: Patriots 45, Broncos10.)

The Baltimore Ravens are feeling like the guy who went to Vegas with a $10 stake and came back with a million bucks after Houston Texans’ punt returner Jacoby Jones suffered the biggest brain-freeze since Jim Marshall’s wrong-way run in 1964, snatching clumsily at an erratically bouncing ball as two large, malevolent, and heavily muscled men approached him at full speed. Jones’ brain fart heard ‘round the world was the difference in the Nevermores’ triumph over the most balanced and dangerous team in the AFC. (Most gloating and hubristic reminder yet: I called it 24-14 Baltimore. The final score: Ravens 20, Texans 13.)

And the New York Giants can light up the most expensive Cohiba in the playoff humidor. Continuing their month-long hot streak, the boys in blue rolled up the defending champion Green Bay Packers as if they were an old, moth-eaten rug and placed them thoughtfully in cold storage for the winter. The Giants were helped by the fact that the Green Bay receivers appeared to mistake the football for an incoming hand grenade, but they would have whupped on the flat, stale and unprofitable Pack anyway. Besides, any team that cannot knock down a Hail Mary pass does not deserve to repeat as champions. (Spoiler alert: Do not read the next sentence unless you want this column’s shocking and dramatic ending, namely that I have no idea what I’m talking about, prematurely revealed. I called Packers 28-21. Final score: 37-20, Giants. Hey, that’s why they call it hubris!)

The NFC championship game looks more compelling than the AFC game. The Ravens-Patriots game is another one of those irresistible force vs. immovable object matchups that the NBA, I mean the NFL, is filled with this year, now that thanks to insanely great quarterback play, superb receivers and the best crop of tight ends in league history, playing D is no longer necessary to win. The Patriots’ defense is so bad that the Ravens have a chance, but Baltimore’s offense looked so constipated against Houston – although to be fair, Houston’s tough defense had a lot to do with that – and Brady and gang looked so sharp, that it is hard to imagine Baltimore going into Foxboro and coming away with a win.

No team in the league can match up with the Patriots’ tight ends, Gronkowski and Hernandez, and there’s no reason to think the Ravens can. To win, the Ravens are going to have to put a lot more pressure on Brady than they did on Houston rookie QB T.J. Yates -- who would actually have played quite well if someone had told him that there is a position in football called “free safety.” Ferocious Baltimore linebacker Terrell Suggs, who was mostly invisible during the game, will have to materialize against the Patriots. The Ravens’ less-than-dynamic offense should be able to put up points against the feeble New England defense, but not enough.

The NFC championship game should be a classic. The Giants are on top of their game right now. They had a great defensive scheme against Green Bay; even though they didn’t generate much pressure from their defensive line, their coverage downfield was so good that Aaron Rodgers couldn’t get into one of his insane rhythms. In that way, the Giants resemble the 49ers, who make opposing teams earn every yard, although the 49ers have a better run defense and a slightly better defense overall.

On offense, the edge goes to the Giants, with Eli Manning playing like his big brother and the scary wide receiver trio of Manningham, Hicks and Cruz. By contrast, the 49ers are thin at wideouts. But as the Saints found out, blazingly-fast tight end Vernon Davis poses a severe matchup problem, and running back Frank Gore, even though he seems to be playing hurt, is a bigger threat than Ahmad Bradshaw or Brandon Jacobs. And although it may seem like a ridiculous thing to say after they gave up 462 yards to Drew Brees, the 49ers secondary is playing lights out.

Part of the reason I like the 49ers is their defense and their kicking game, and of course home-field advantage. But the real reason is Alex Smith.

I know, that’s weird, verging on commitable. Taking Smith over Manning? No one could seriously argue that Smith has achieved even a fraction of what Manning has. But Smith is an X-factor. He is poised to confound his doubters and shock the world. Like he just did.

Saturday’s game, which I attended, etched itself into 49ers lore for a whole bunch of reasons. There was the performance of the defense, holding the potent Saints at bay for those agonizingly long stretches when the 49ers offense struggled. There was Vernon Davis, weeping without shame in the arms of coach Jim Harbaugh after catching the winning pass, a strong man reduced by relief and gratitude and utter emotional exhaustion to his naked human essence, his dissolving face one of the most moving things I’ve ever seen in sports. But what made this game the stuff of legends was the performance of Alex Smith.

Smith has been reviled ever since he put on a 49er uniform. Virtually no one in the Bay Area, including the fans and the so-called “experts,” ever believed in him. The fans have come around some now, but the bandwagon is still not exactly crowded. I saw thousands of Montana and Willis and Young and Lott jerseys in the stadium Saturday. If there were any Alex Smith jerseys, I missed them. As for the rest of the country, fuggedaboutit. New York Post football writer Mark Cannizzaro’s appraisal of Smith (issued just before Smith and the 49ers beat the Giants this year) is typical: “Alex Smith cannot beat you…Here’s the reality about Smith: He is who he has always been since he came into the league as the 49ers’ first-round draft pick in 2005 -- a mediocre quarterback.” My own friends derided me for standing up for the guy.

Finally given a real coach and a consistent system, Smith had a remarkable renaissance this year. And then, on Saturday, at the biggest moment in his career, with everything on the line, he came through – and he did it not once but twice. To hang in there for six years, working hard every day, tuning out the doubters, with no one except the guys in the locker room believing you can succeed, takes more than talent. It takes character.

When Smith threw that last perfect pass and Davis caught it just before Roman Harper leveled him just over the goal line, and he held on to the football and got to his feet, Candlestick Park went crazy. Amid all the shouting and screaming, I looked over to a young woman sitting to my left. She was weeping, her head bent, tears running down her face. At that moment I realized that she, like many of the fans in the stadium, like my 23-year-old son who called me up in breathless, disbelieving joy after the game, had not even been alive when Joe Montana and Dwight Clark launched the 49er dynasty 30 years ago.

For her, the memories I had of The Catch, of Young and Lott and Craig and all the rest of the great players and teams of the past, of five Super Bowls and years of happiness, were only legends, replays on TV. Alex Smith and Vernon Davis had given her a priceless gift: her own memories. I think that’s why she was crying. And whether the 49ers win next week or not, they can’t take that away from her.