Paula Deen cashes in on diabetes 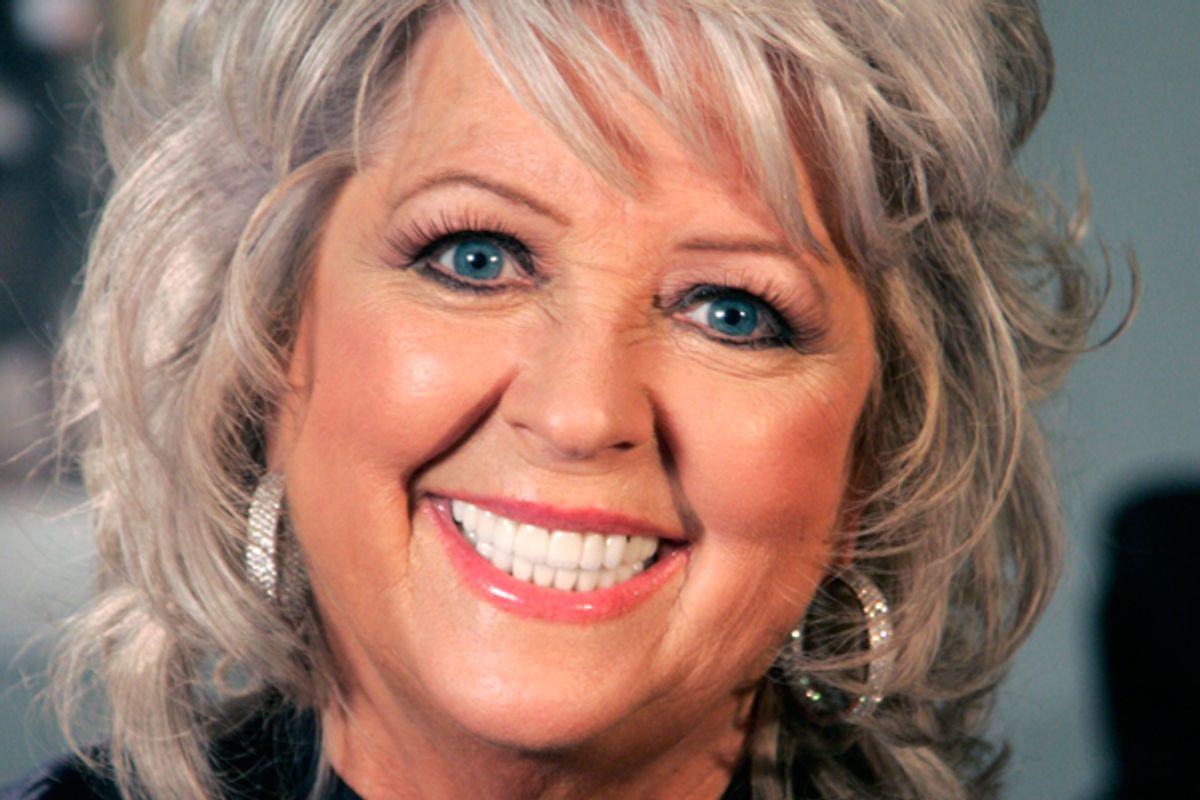 It may have been an occupational hazard, but Paula Deen insists it's not a "death sentence." Deen, the good times-lovin' queen of Southern cuisine, took to the "Today" show Tuesday to discuss her life with Type II diabetes and how it would affect her "wonderfully Southern, fattening dishes."

It was Deen's first televised interview since going public with her condition, which was diagnosed three years ago. And for some, the news that a Food Network star who built her brand with cheeseburger meatloaf and Krispy Kreme bread pudding now has diabetes was a rich gloating opportunity. Commenters on the New York Times noted her career-long "fat and sugar orgy" and declared that "Paula, if anyone had it coming, it's you." And though Deen's arch-nemesis Anthony Bourdain told Eater.com that "I take no pleasure in it. There ain't nothing funny about diabetes," he also couldn't resist noting that "when your signature dish is a hamburger in between a doughnut, and you've been cheerfully selling this stuff knowing all along that you've got Type II diabetes ... It's in bad taste if nothing else." Bourdain, demonstrating some restraint, failed to mention that Deen's signature burger also features bacon and a fried egg.

Diabetes is a disease more and more of us will face. According to the CDC, there are nearly 19 million people who've been diagnosed with diabetes in this country -- and another 7 million who don't know they have it. Between 90 and 95 percent of those cases represent Type II, a disease with complications that can include heart disease, vision problems and nerve damage. It's the seventh-leading cause of death in the United States, and it's most commonly found in individuals who are older, overweight and/or have high cholesterol levels.

Deen meets the criteria for a perfect storm of risk factors. She turns 65 on Thursday; she admitted last fall she smoked a pack and a half a day. She will also deep fry anything, and I mean anything: macaroni and cheese, stuffing, even butter itself.  For years, she's existed as the Keith Richards of cholesterol, seeming to survive solely on pork fat, powdered sugar and rum. Yet Deen told Al Roker Tuesday, "I have always encouraged moderation. I share with you all these yummy, fattening recipes, but I tell people, in moderation ... it's entertainment. People have to be responsible." Of course, what makes for an artery-seizing episode of television is not necessarily a lifestyle endorsement. As Deen likes to say, "I'm your cook, not your doctor. "

But here's where the story takes a turn more distasteful than a cheesy ham and banana casserole. Now Deen is jumping on board the health-advice bandwagon. Three batter-dipped years after her diagnosis -- and after three years of silence about her condition -- she's teamed with diabetes drug maker Novo Nordisk to promote the company. She and her two sons, Bobby and Jamie, are appearing in a new campaign that includes "diabetes-friendly meals" and Deen's genteel admissions that she's walking more and cutting back on sweet tea. Deen told USA Today  that "I made the choice at the time to keep it close to me, to keep it close to my chest. I felt like I had nothing to offer anybody other than the announcement. I wasn't armed with enough knowledge. I knew when it was time, it would be in God's time."

God's time? Or the time when she had an endorsement deal? And wait a minute – a woman who cooks for a living didn't have anything to offer people with diabetes? The same woman whom Bourdain warned years ago "revels in her unholy connections with evil corporations"? Sure, Deen's new gig is one way of turning lemons into unsweetened lemonade. It's also true that Deen never promised to be anybody's version of the food police -- as long as there is oil, someone will be there to heat it up and throw candy bars into it. Likewise, the smug morality of commenters who act like diseases – especially ones that have genetic and age components -- are somehow deserved is just small-minded and cruel.

But Deen knew she had diabetes for three years and still pushed doughnut burgers on her fans. Then she waited to tell people until she had an endorsement deal with a drug company. It's hard to see that choice as anything but shabby. Deen could have spent three years talking about "moderation" without making any money off a pharmaceutical company. Like Bill Clinton, who slimmed down on a mostly vegan regimen, she had the potential as a Southerner and a food lover to teach her fans new strategies for eating and living -- and she could have done it without shilling for the pharmaceutical industry. She looks like a calculated opportunist today -- when, she could have, for those millions of fellow Americans with diabetes, been simply sweet.