Chris Dodd, 3-decade senator who vowed not to lobby, is now the top paid advocate for an Internet censorship bill 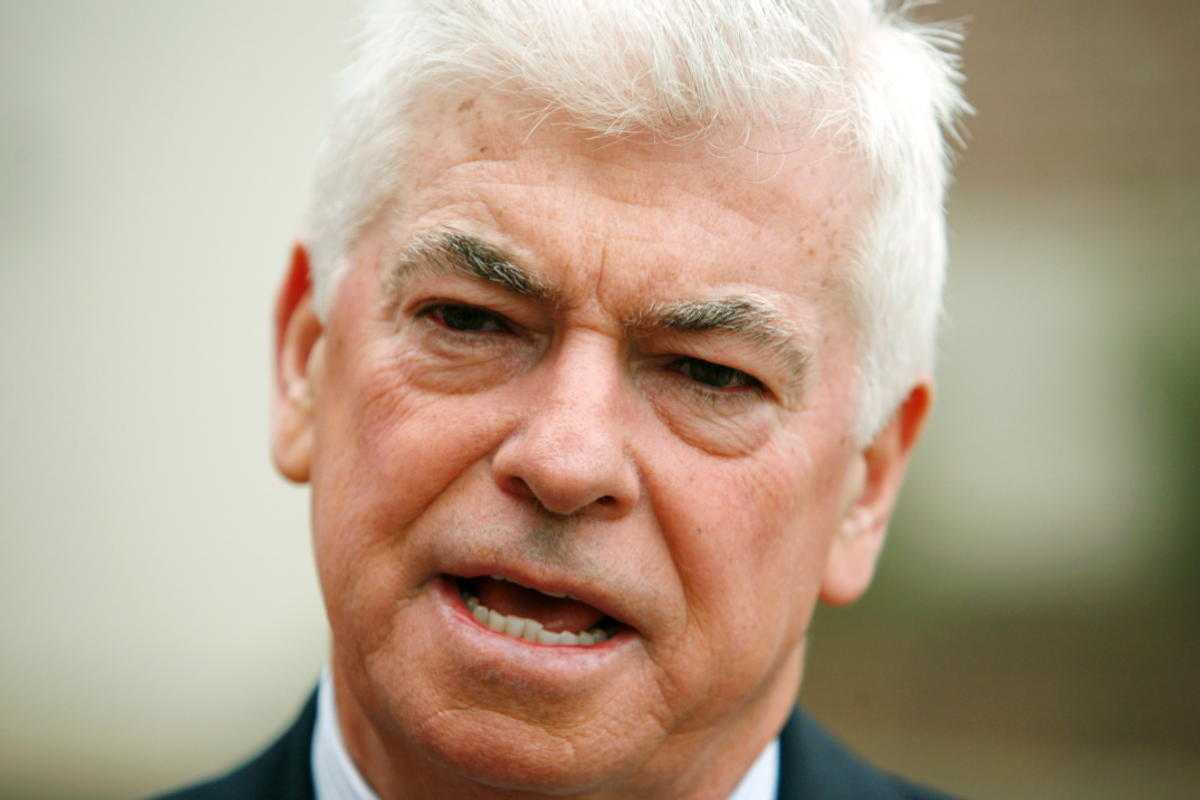 WASHINGTON -- Sen. Chris Dodd says he still doesn't know what he'll do come January 2011, when, for the first time in 36 years, he will no longer be a member of Congress. But he has ruled out one option.

"No lobbying, no lobbying," Dodd said in a recent interview. That Dodd would forgo a trip through Washington's "revolving door," using his policy and political expertise--and a thick Rolodex--to launch a new career in the influence industry, may come as a surprise.

"It is an irresponsible response and a disservice to people who rely on them for information and who use their services,'' Dodd said in a statement. "It is also an abuse of power given the freedoms these companies enjoy in the marketplace today."

Chris Dodd's emphatic 2010 pledge not to lobby once he finally left the Senate was prompted by widespread speculation that he spent the last two years in office blatantly shilling for corporate interests in order to ensure a prosperous post-Congress career. Particularly during the 2010 financial reform debate -- when it became increasingly apparent that allegations of improper benefits from Countrywide Financial would make his re-election close to impossible — Dodd served on multiple occasions as chief spokesman for, and defender of, the interests of Wall Street and corporate America. Though sleazy and grotesque, it was therefore entirely unsurprising when it was announced last March that Dodd would "be Hollywood’s leading man in Washington, taking the most prestigious job on K Street": Chairman and CEO of the Motion Picture Association of America (MPAA), "whose perks include a $1.2 million-a-year salary and getting to attend the Academy Awards ceremony."

It is in that capacity that Dodd has become the leading public spokesman and private lobbyist for the truly dangerous PROTECT IP Act (PIPA) in the Senate and Stop Online Piracy Act (SOPA) in the House, bills craved by the industry that pays him. These bills, which vest the power in large corporations and the government to seize and shutdown websites with little or no due process in the name of stopping piracy, pose the greatest dangers to Internet freedom of any bill in the last decade, at least. So serious are these threats that they have prompted a rare -- and inspiring -- protest movement from numerous large Internet companies and blogs in the form of an Internet "blackout" today.

In his SOPA advocacy, Dodd has resorted to holding up Chinese censorship as the desired model, mouthing the slogans of despots, and even outright lying. Like virtually all extremist, oppressive bills backed by large industry, SOPA and PIPA have full bipartisan support; among its co-sponsors are Democratic Sen. Patrick Leahy and GOP Rep. Lamar Smith, with many Senators from both parties in support and Harry Reid pushing it forward (to its credit, the White House expressed opposition to several of the worst provisions, though has not yet issued a veto threat).

It's behavior like Chris Dodd's that makes it rational not only to be cynical about our political culture, but outright jaded. What makes Dodd's shilling for this censorship law so galling is that, during the 2008 presidential campaign, he postured as the candidate who would devote himself first and foremost to defending core Constitutional freedoms and civil liberties. When Dodd led the 2007 fight against warrantless surveillance and amnesty for lawbreaking telecoms as part of the FISA debate, I, along with several other blogs and MoveOn.org, helped raise close to $250,000 in a few days from small donors for his flagging presidential campaign. Several months earlier -- in August, 2007 -- I interviewed Dodd about the prominence of Constitutional issues, civil liberties and the rule of law in his presidential campaign, and this is what he told me:

A campaign for president allows you to have a megaphone here on a national scale to talk about these things, at a time when this crowd, if it continues, can enable you to stop them, do even more than raise the issues. But secondly, if I don’t win this thing, I want everyone else to be talking about these issues. . . .

I carry every day, and have for 26 years, a copy of the U.S. Constitution given to me by Robert Byrd [takes Constitution out of his back pocket]. And to me, what could be more fundamental? With all due respect, I care about health care, education, global warming. But if you get this wrong — what do you got? A trade association. Who wants to be president of a trade association?

And this [holding the Constitution] is the spark, the illumination, it is, if I may so say, the envy of many around the world.

Apparently, the person Chris Dodd scorned back then as someone "who wants to be president of a trade association" was . . . Chris Dodd, who is now President of Hollywood's trade association. Back then, Dodd was running around inducing large numbers of people (including me) to cheer on his presidential campaign by venerating Constitutional freedoms as the supreme value. Now, a mere three years later, he is peddling his influence in Washington -- assembled during his 35 years in Congress -- on behalf of a bill that, as several law professors in The Stanford Law Review recently wrote, "not only violates basic principles of due process by depriving persons of property without a fair hearing and a reasonable opportunity to be heard, it also constitutes an unconstitutional abridgment of the freedom of speech protected by the First Amendment" (Constitutional law professor Laurence Tribe has argued the same).

Furthermore, one of the bill's chief Senate sponsors is a liberal Democrat from Vermont, Pat Leahy, who during the Bush years flamboyantly depicted himself as a stalwart defender of Constitutional liberties -- and whose "top 3 campaign contribution sources [are] lawyers, entertainment industry, lobbyists." Those industries are, of course, also major donors to Leahy's House GOP counterpart. It's all redolent of how Howard Dean quickly converted himself from a righteous presidential candidate who inspired large numbers of young Americans into little more than a paid shill who exploits his political celebrity by reciting the script of whichever political interests are paying him the most.

In the face of pervasive, sleazy conduct like this, it's not only tempting to be jaded about partisan activism: it's rational. Watching Chris Dodd and Pat Leahy join equally compromised Republicans in crusading for an Internet censorship bill -- not even out of sincerely held authoritarian impulses but just base, corrupted subservience to industry -- reveals most of what one needs to know about how the political class functions and who owns and controls it.

The backlash against these bills has caused its sponsors to put them on hold (and it's notable that it takes the opposition of a large industry -- in this case, Silicon Valley -- to achieve that outcome). In many circles, this delay is being interpreted as a lethal, final defeat, but as we've repeatedly seen, industry-backed measures do not die even when they prompt massive public opposition that appears to prevent them. They simply slink away to retool and return when the opportunity is right. That will definitely happen with SOPA. Vigorous, ongoing opposition is therefore vital; EFF offers a couple of ways to participate here.

The Atlantic's Conor Friedersdorf has a truly superb response to the latest in a long line of Obama-Is-Awesome-and-His-Critics-Are-Confused-or-Worse articles, this one appearing as this week's cover story in Newsweek by Andrew Sullivan.