Facing a Republican-imposed deadline, he rejects approval -- for now 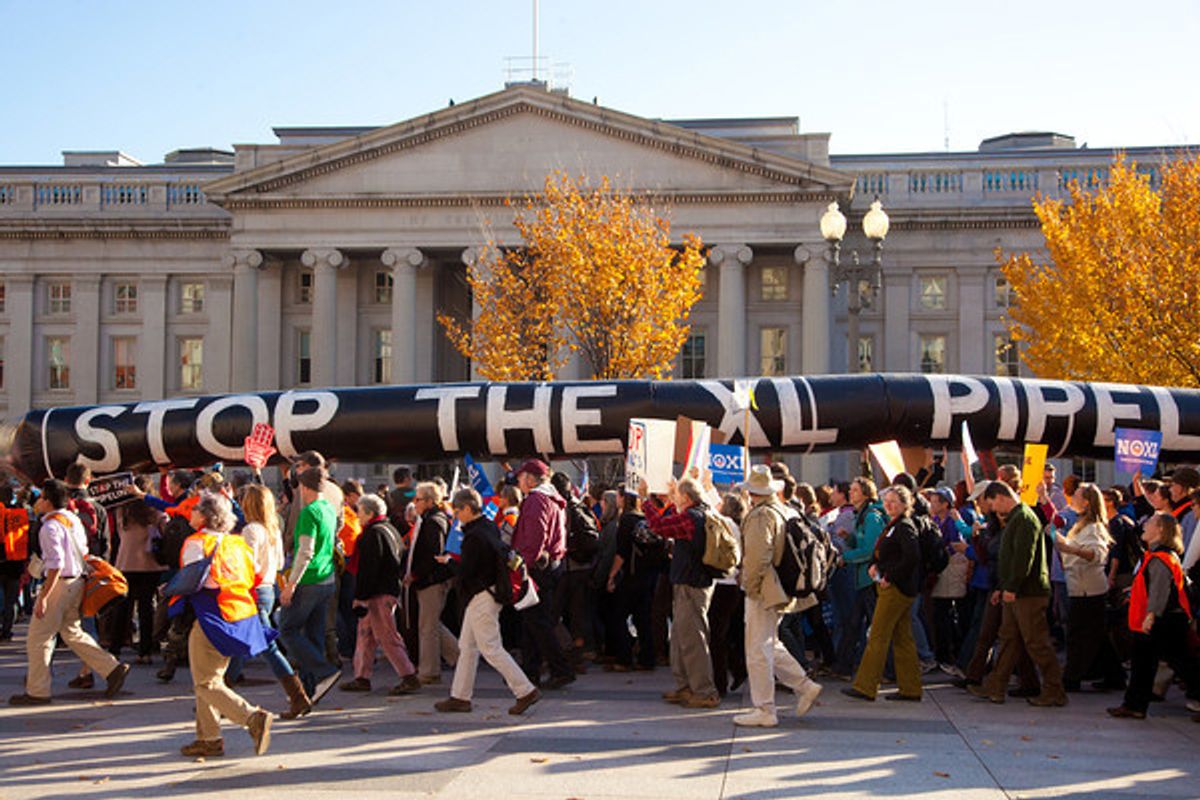 Dead or alive, the Keystone XL pipeline now runs through the heartland of American politics.

The Obama administration announced today that it has rejected the proposed 1,700-mile pipeline that would link the tar sands of Alberta, where crude oil is extracted, with U.S. refineries along the Gulf. Republicans are promising to step up their efforts to build the pipeline, which was largely unknown to the public just six months ago.

The decision isn't exactly a surprise. Obama has repeatedly made clear that he would not approve any attempts to force the pipeline through without an adequate environmental review. The State Department had also stated that it would not approve the pipeline if the time frame for the review was rushed, warning in December that the deadline imposed by Congress would “compromise the process.” Nevertheless, House Republicans inserted a provision into the payroll bill passed last month requiring the administration to reach a decision on the pipeline by Feb. 21.

This rejection does not kill the pipeline. According to the Washington Post, the administration will allow TransCanada to propose an alternative route through Nebraska that avoids the sensitive Ogallala aquifer. Nebraska and TransCanada have already reached a tentative agreement to reroute the pipeline, so it seems likely that the corporation will proceed with this option.

Republicans in Congress have already begun to explore ways of advancing the pipeline even in the case of an Obama rejection. Sen. John Hoeven of North Dakota is reportedly drafting legislation that would allow Congress to approve the provision without presidential approval.

Still, environmentalists greeted the news with cautious celebration, cheering the decision while recognizing that the fight isn’t over. In a message to supporters, Bill McKibben praised the president for standing up to Big Oil, and called the decision a “victory for Americans who testified in record numbers” while acknowledging that “the fossil fuel lobby won't give up easily.” Indeed, the fact that the pipeline was debated at all is due to pressure from McKibben's army of activists. Last August, shortly after sit-ins against the pipeline began, a former State Department official said approval was “likely.”

House Speaker John Boehner, on the other hand, insisted the president should approve the project, noting that it would “create 100,000 new jobs” — a statistic taken from a widely quoted but oft-criticized study conducted by TransCanada. (Independent analysis by Cornell University suggests the pipeline would create between 2,500 and 4,650 temporary construction jobs, while the State Department projects 5,000-6,000.) Boehner went on to say that Obama was seeking to delay the Keystone project “until it’s convenient for him to make a decision,” asking, “Where are the jobs?”

Boehner’s statement reflected attempts by Republicans to spin the Keystone decision as a capitulation to “radical environmentalists.” Democrats, on the other hand, will try to place blame with the Republican House, arguing that they invited the pipeline’s demise by including the Keystone provision in an unrelated bill despite warnings that it would be rejected.

The oil industry has indicated that it will try to make the pipeline into an election year issue. The president of the American Petroleum Institute, the industry’s top lobbying group, warned two weeks ago that "Anything less than approval or acquiescence in allowing the pipeline to go forward would be inconsistent with the vast majority of Americans."

David Roberts at Grist points out that Republicans will try to paint Obama as “a job-killing pinko who hates energy,” no matter what he does with regard to Keystone.