Is grease good? His hairstyle reminds us of Gordon Gekko, film's top vulture capitalist, but goes back further 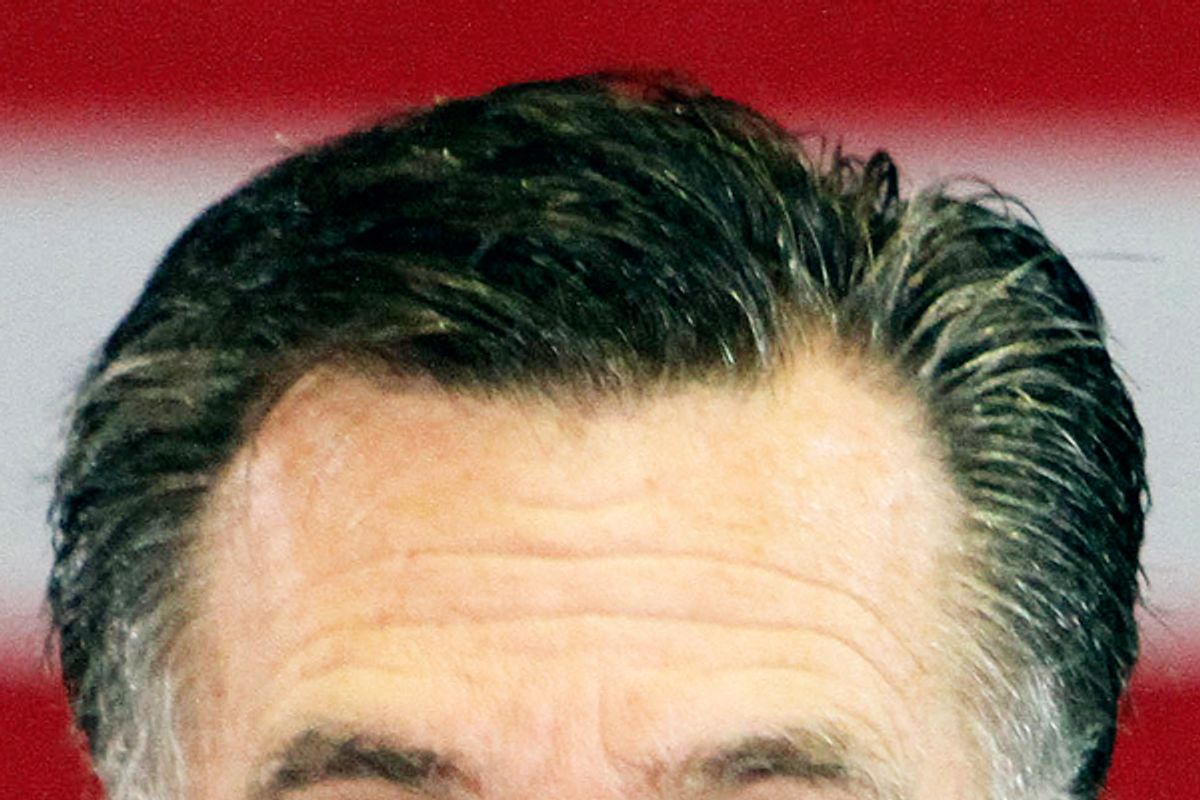 For businessman-turned-politician Mitt Romney, "looking the part" isn't necessarily a good thing. At a time when the presidential candidate is being pilloried as a vulture capitalist by rivals from both parties -- yesterday's revelation about his low income-tax rate is just more fodder for an already healthy fire -- he also sports the hair of a vulture capitalist. It recalls the slicked-back style of "Wall Street's" infamous Gordon Gekko.

When slicked-back hair is associated with the likes of a corporate raider like Gekko -- Maureen Dowd wrote just last week that Republicans in New Hampshire were "painting Romney as a ruthless Gekko, complete with a 1980s-era slicked-back mane" -- it's safe to say the signals that it sends are negative. That's particularly the case in the current, Wall Street-wary climate. But where did the slicked-back style originate? What other cultural connotations does it command?

Slicked-back hair has gone in and out of fashion since at least the 18th century, when a more dramatic iteration of the style was popularized by Madame de Pompadour, mistress of France’s King Louis XV. In her "Encyclopedia of Hair," Victoria Sherrow says the ancien regime socialite "set a trend among women by wearing tall hairstyles built around a wire frame,” explaining that “pomade was used to set the style." The male version of the look “is combed back off the face without a part, forming a mound of hair above the forehead ... Elvis Presley wore a version of this hairdo during the 1950s, as did movie idols, including Marlon Brando and James Dean."

A similar history is rehearsed by Ellen Mirojnick, the costume designer for 1987's "Wall Street,” when she explains the inspiration for Gordon Gekko's style. Mirojnick has often said that Gekko's overall look sprang more from her own romantic impulses than from the realities of late-1980s Wall Street -- and that, as a result, the character looked more like a movie star than a genuine high financier (elements of Gekko's style have since been adopted by real-life Wall Street money-men).

"[In past centuries,] men slicked back their hair to accommodate the wigs they wore," Mirojnick notes. "After the wigs went away, slicked-back hair was really associated mostly -- before gangsters -- with a general category of movie stars and actors; it goes back to the '20s, with Rudolph Valentino,” who often wore his hair slicked straight back or parted on the left.

"The inspiration for [Gekko's] hair came from Michael Douglas, and that inspiration was sparked by Pat Riley," who then coached the NBA's Los Angeles Lakers. "[Michael Douglas] brought that idea to the table, and I brought this romanticized, glamorous, movie-star kind of Duke of Windsor/Gene Kelly combination of the golden age of Hollywood. That was my inspiration, truthfully ... I didn't look to anything but how movie stars dressed elegantly in the '40s."

Where Mirojnick is concerned, the Romney-Gekko comparison is a hard sell. "The difference in Romney's hair and Gordon Gekko's hair is that Romney's has a part," she says; Gekko’s hair, on the other hand, is swept straight back. In her eyes, much can be gleaned about both characters from this disparity. Romney's style is more "specific," "manicured" and "meticulous,” whereas “if you look at [Gordon Gekko's] slicked-back hair, sometimes it looks messy ... It doesn't look perfect; it just looks like he put stuff in his hands, put it through his hair, and combed his hair. It doesn't look polished like Romney's does."

“Gordon had a fluidity; Gordon had a swagger,” Mirojnick elaborates. “You didn't see him armored, I don't think. I just think [Romney] is so put-together and so specific that it appears to be all armored. There's nothing relaxed about him. Whereas Gordon ... allowed you to come in.”

The suggestion of fastidiousness certainly fits with Romney’s public image; whole "Saturday Night Live" sketches have already been devoted to the candidate's perceived stiffness. A New York Times piece on the eve of the Iowa caucuses even suggested that precise organization is characteristic not only of Romney himself, but his entire campaign.

Image consultant and political style blogger Christina Logothetis says she doesn't think Romney’s look necessarily channels Gordon Gekko -- or even other familiar slicked-back characters such as "Mad Men's" Don Draper. It does, however, radiate executive polish: "I think it does generally place him in the category that he gets placed in anyway, which is of this very polished businessman ... That being said, it’s also just very functional for him; it keeps his hair very neat."

Would Logothetis advise a male client running for office in 2012 to try the slicked-back look? She says it could pose problems. "I would definitely flag it as something that starts to associate a person with images of wealth ... It also calls attention to the fact that this man is using styling products, and that isn't usually perceived well. We all remember the trouble that candidates have had in the past when how much they pay for a haircut comes out in the press." As a rule, it’s better for a candidate to look natural and minimally styled, no matter how much work has actually gone into his or her appearance.

Glenn O'Brien, a style writer for GQ and author of "How to Be a Man: A Guide to Style and Behavior for the Modern Gentleman," agrees. "I think that in politics, you're supposed to be real; you're not supposed to be styled and groomed. And Mitt Romney sort of looks like he's been groomed professionally. It's like John Edwards' $400 haircut; if you look narcissistic -- if you look like you pay too much attention to your appearance -- then I think that's sort of supposed to be a bad thing.

"Aesthetically," O'Brien goes on, the slicked-back style "is about control. It's not a natural look ... I guess there's a certain kind of executive look of being finished, being done, that it connotes." O'Brien adds that Jon Huntsman, Romney's one-time rival for the GOP nomination, also has a slicked-back hairstyle. But since Huntsman's overall look is less "artificial" than Romney's, it's harder for observers to pick one physical trait and use it as part of a larger attack.

According to statistics released by the [National Organization of Men with Slicked-Back Hair], five out of every six characters with slicked-back hair are cast as the primary antagonist. Of this group, 29 percent are depicted as greedy and manipulative Wall Street sharks, 22 percent as cold, emotionless murderers, 19 percent as evil coaches or mentors, 12 percent as corrupt mafiosi, 8 percent as undead creatures who feast on human blood, and the remaining 10 percent fall into the general category of jerks/pricks/John Travolta.

Whatever cultural forces have dictated the popularity of the slicked-back hairstyle over the years -- and however it might come across in the political arena today -- when I ask D.C.-based image consultant Yasmin Anderson-Smith what she thinks of Romney's look, her mind immediately jumps not to Gordon Gekko or Don Draper, but to the candidate’s father, George, who wore his hair slicked back (and parted) long before “Wall Street” was released. Perhaps in Romney's case, she suggests, there is a more basic, time-honored fashion formula -- like father, like son -- at work.