Yummy, yummy! The Internet goes ape as an original member returns to a beloved children's band 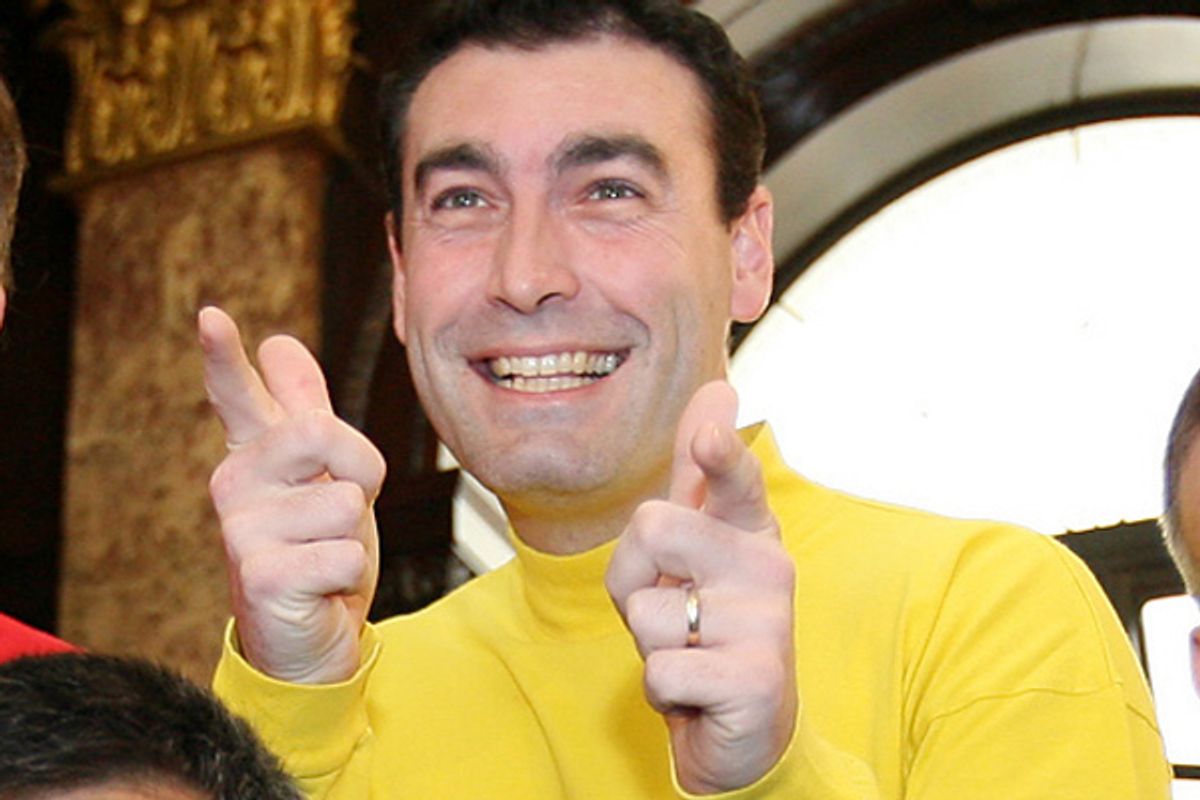 They are a musical group that defined a generation, cranking out an unstoppable slew of hits and selling out arenas around the globe. But when a key member bowed out, the group's future seemed uncertain -- until a charismatic newcomer joined the band. Now, years later, to the delight of millions of loyal fans – and the outrage of others – the original lineup is back together.

Sure, you too, Van Halen. But today is about the Wiggles. Original Yellow Wiggle is back, people!

The Wiggles, that relentlessly cheerful powerhouse of kid tunes -- and one of Australia's most successful exports of all time -- stunned preschoolers around the globe Wednesday with the sudden announcement that founding Wiggle Greg Page was returning to the group after a five-year absence. He begins creating new television and musical content with the group effective immediately, and an international tour begins in March. And so, the yellow shirt is passed back to its original owner.

Unlike some of the crazy crap that's gone down with, say, Quiet Riot, Page's departure in November 2006 was a far more amicable, if unfortunate, turn of events. After being diagnosed with the rare nervous system disorder dysautonomia, Page quit the group and handed over the reins to his longtime understudy, Sam Moran. Moran will now depart after nine years.

The notion of a man returning to the stage he loves after fighting a debilitating illness is no doubt a happy one, and it caused a mass outbreak of nostalgia among fans of the 21-year-old group. "OMG yes! My childhood!" wrote one Facebook poster. "Great to hear Greg is back!" Page, who says his health is now "good," clearly feels the same way. He told the Australian, "It's really like I never left. It's like I walked out the door yesterday and walked back in today. There is still the same chemistry between us."

But leave he did. And those five years Sam Moran has been with the Wiggles are, quite literally, a lifetime to the band's core young audience. Moran's abrupt departure is the biggest thing to happen to preschool entertainment since Steve left "Blue's Clues" and his "brother" "Joe" swanned in. And not everybody is thrilled with the new lineup. Interspersed with the happy "Welcome back" messages on the group's fan page are plenty of "Not a good move, Wiggles" voices, as well. "This change will certainly confuse the younger generation," wrote one poster. "My daughter saw the news and was actually upset." And mother and "Wiggles devotee" Sam Limmer told the Australian Wednesday, "I think Greg is a bit past it and he gave it up. That's not fair for him to come back."

It may look like it's all good times and mashed banahhhhnas in the world of childhood, but the shakeup of a group that earned $29 million worldwide last year is a very big deal. There will be kids who pitch fits, and parents who do likewise. There will now be die-hard Greg people and Sam people. Some anguished fans have even begged  Sam to remain, suggesting he could be shunted to a newly formed role of Green Wiggle. But come on. As any child could tell you, there's only room for four in that big red car.