For fans of the 49ers and Ravens, the road to the big game is paved with pain 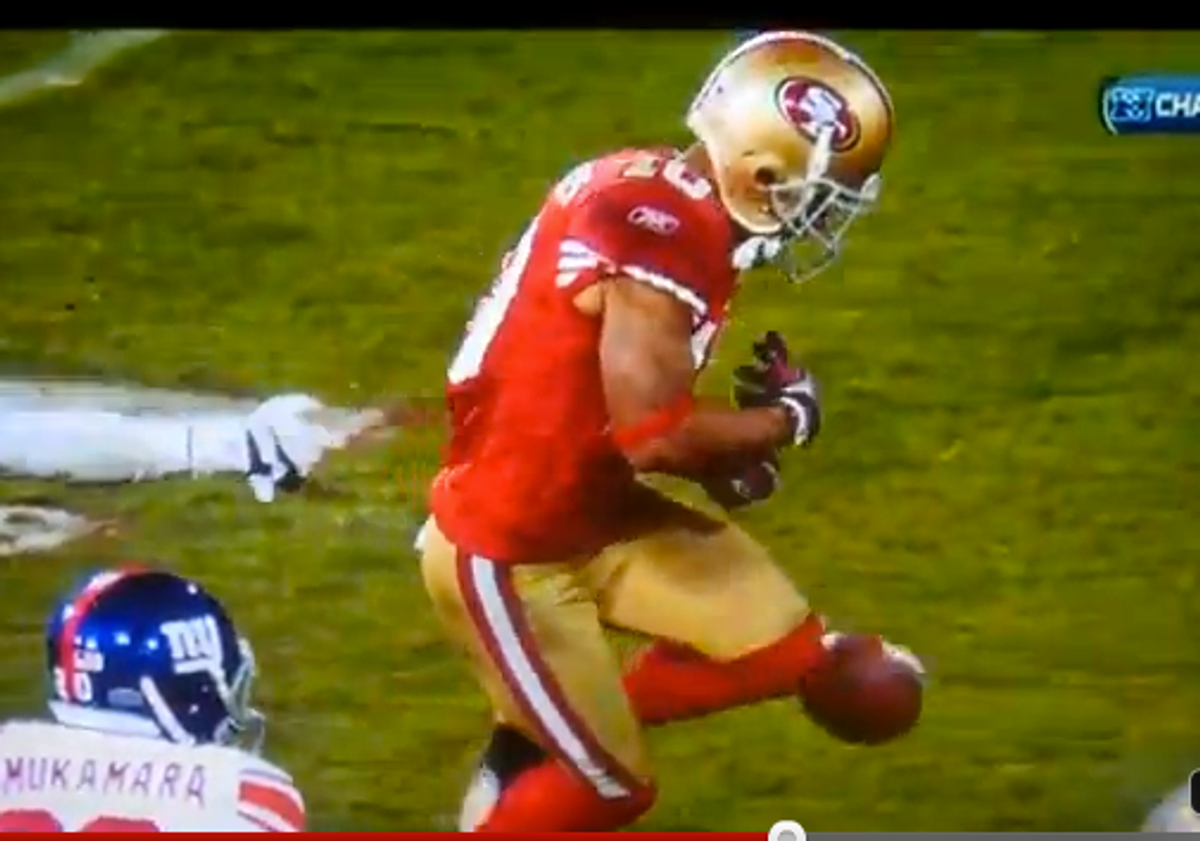 Just when it looked like the NFC and AFC championship games were going to last until the Super Bowl, two fatal blunders brought them to an abrupt close. The stunning conclusions to two of the most tense, evenly matched conference championship games in recent memory were a painful reminder that although football is a team game, one miscue by a single player can wipe out thousands of hours of collective blood, sweat and tears.

It will be a sad and lonely night for Baltimore Ravens’ kicker Billy Cundiff, whose shanked chip-shot 32-yarder gave the AFC championship to the New England Patriots. Kickers must have strong mental constitutions: in a sport where bonds between teammates are cemented in blood and pain, they are not always regarded as full-fledged comrades to begin with, and so when they screw up, it’s even harder for them to deal with. The mantra “short memory,” which defensive backs are constantly shouting at each other, applies in spades to kickers.  Cundiff could use a tall glass of Milk of Amnesia.

It must have been an especially bitter defeat for the Ravens because they had played the Patriots to a standstill. In fact, they would have won the game had receiver Lee Evans been able to hold onto a pass in the end zone for another split-second, before New England backup defensive back Sterling Moore poked it out. On a night when Tom Brady had a subpar game – “I sucked pretty bad today,” he said – Baltimore had a golden opportunity to make it to the Super Bowl. The opportunity, for aging legends like Ray Lewis and Ed Reed, may never come again.

But the biggest goat horns belonged to San Francisco 49er return man Kyle Williams, who made not one but two critical mistakes that basically cost the 49ers the game. His first miscue took place midway through the fourth quarter, with the 49ers leading the New York Giants 14-10 and about to get the ball back. It was not only a game-changing play, it was one of the weirder instant replays I’ve ever seen.

As a Steve Weatherford punt landed in front of him and began bouncing toward him, Williams was torn between trying to field it, saving valuable yards of field position, and playing it safe by getting away from it. His indecision only lasted half a second, but it cost him and his team dearly. The ball ticked almost imperceptibly off his knee, and the Giants recovered it as he froze, desperately trying to look like he just happened to be walking by the bank when the vault exploded and a large wad of banknotes flew into his unwilling hands. The officiating crew on the field ruled that it was 49ers ball; the Giants challenged the call. The slow-motion replays were inconclusive, leading 49er fans like me to briefly hope that a saving cloud of epistemological murk had descended, a Nietzschean universe in which there were no facts, only interpretations. But then perspectivism was refuted: A regular-speed replay from a different angle clearly showed the ball touching his knee.

That was odd enough – normally the full-speed shots are more ambiguous, not less -- but the really odd thing was Williams’ reaction. If he knew that the ball had touched him – which he may not have – did he really think he could get away with feigning innocence? The all-seeing eye of Sauron was going to find him out and shoot him down. His nothing-to-see-here, keep-moving reaction was understandable, but it somehow seemed like trying to hide under the bed when a drone has launched a missile at you.

That mishandled punt led to a Giants touchdown. And then, in overtime, Williams fumbled while returning another punt. The Giants recovered and kicked the winning field goal.

Williams’ 49er teammates all told him to keep his head up, that he hadn’t lost the game. Quarterback Alex Smith said that the real reason the 49ers lost was that they couldn’t convert on thirddown: They were an abysmal one for 13, and that one was a meaningless quasi-Hail Mary at the end of the first half that the Giants conceded. The solidarity Williams’ teammates showed was admirable, and in the great scheme of things they’re right that one player doesn’t lose a game. If the 49ers’ mediocre wide receivers had ever gotten open, if the 49ers’ coaches had stayed with what had been an effective rushing attack toward the end of the game instead of inexplicably deciding to pass on every down, if they had overcome their aversion to calling screens and swing passes, Williams’ boo-boos might not have mattered.

But those flaws are integral to the 49ers. All year long, they struggled to convert thirddowns and score in the red zone. Alex Smith has taken most of the blame for these failings, and he deserves some of it. But so do his receivers. And so do the 49er coaches, who have devised a highly creative running game but whose passing schemes are strikingly ineffective.

The 49ers lived all year on great defense – this year’s version is right up there with the great defenses in the glory years led by Ronnie Lott – and above all by not making mistakes. They tied an all-time NFL record for the lowest number of turnovers, with 10. But this means they have no margin for error. Until they put some electricity in their passing game, they have to play flawless football to beat a first-rate, well-rounded team like the Giants. And that isn’t going to happen every time.

I was bummed that Alex Smith’s redemption story did not have a Hollywood ending. Although he didn’t have a great game – the fact that his 97.6 quarterback rating was higher than Eli Manning’s 82.3 shows how little those ratings can mean – he played well enough this year to have convinced all but the most obdurate that he is not the 49ers’ problem.

Still, even taking into account how bad the 49ers’ receivers are compared to the Giants’ lethal trio of wideouts, the contrast between Manning and Smith in this game was striking.

Manning simply played at a higher level. Under heavy pressure in the second half, he managed to find open receivers time and again, whether on outlet patterns or downfield. His accuracy was remarkable for a game played in terrible weather. And even when he was being smashed to the ground, he kept his poise. No quarterback in the league is playing better than he is right now.

All four teams were remarkably closely matched; both games could have gone either way. But in the end the two best teams from each conference are going to the Super Bowl. And just as the matchup between the Giants and the 49ers became more intriguing after Alex Smith won last week’s legendary shoot-out with Drew Brees, so the matchup between the Patriots and the Giants has become a lot more interesting after the Patriots showed they could actually play defense against the Ravens. Defensive tackle Vince Wilfork had a monster game, and the Patriots’ secondary managed to hang in there against Anquan Boldin and Torrey Smith. Also, Brady is not going to lay an egg two games in a row.

A personal postmortem, now that my team has been eliminated. Defeat is bitter wormwood. I’d forgotten how bitter.

It has been many years since I’d really felt anything, good or bad, about the 49ers. The team sucked and I got used to being disappointed. The glory days felt like they took place in another lifetime – and in a way they did. I shut my expectations down. And my emotions.

Then this amazing season reawakened something. And when the 49ers pulled off that victory for the ages last week against the Saints, it all came back. I felt the delirious joy I, and the city, felt the first time, and every time, the 49ers won the Super Bowl. I remembered the shouts of joy echoing across rooftops on Nob Hill, and the old black man on the corner of Broadway and Columbus doing a funny little dance and saying to everyone who went by, “Who said Joe ain’t bad?” Like a woman who can only remember the joy of giving birth and has blocked out the excruciating pangs of labor, I conveniently forgot the agony of all the losses – Billy “White Shoes” Johnson’s last-second catch in Atlanta, the Don Beebe dagger, Roger Craig’s fumble against the Giants, the phantom pass-interference call against Eric Wright against the Redskins.

But when the 49ers walked off the field Sunday with their heads down, in front of a sad, silent crowd, 30 years’ worth of bad old memories came rushing back. As I drove through the empty streets, the city’s collective sorrow seemed almost tangible, like the weeping sky. It, and I, had gone from ecstasy to misery in one week. I wondered for a moment if it was worth it.

But I only wondered that for a moment. This had been a wondrous season, a gift. Yes, it ended in heartbreak. But I would rather feel heartbreak than nothing. In sports, as in life, it’s better to have loved and lost than never to have loved at all.