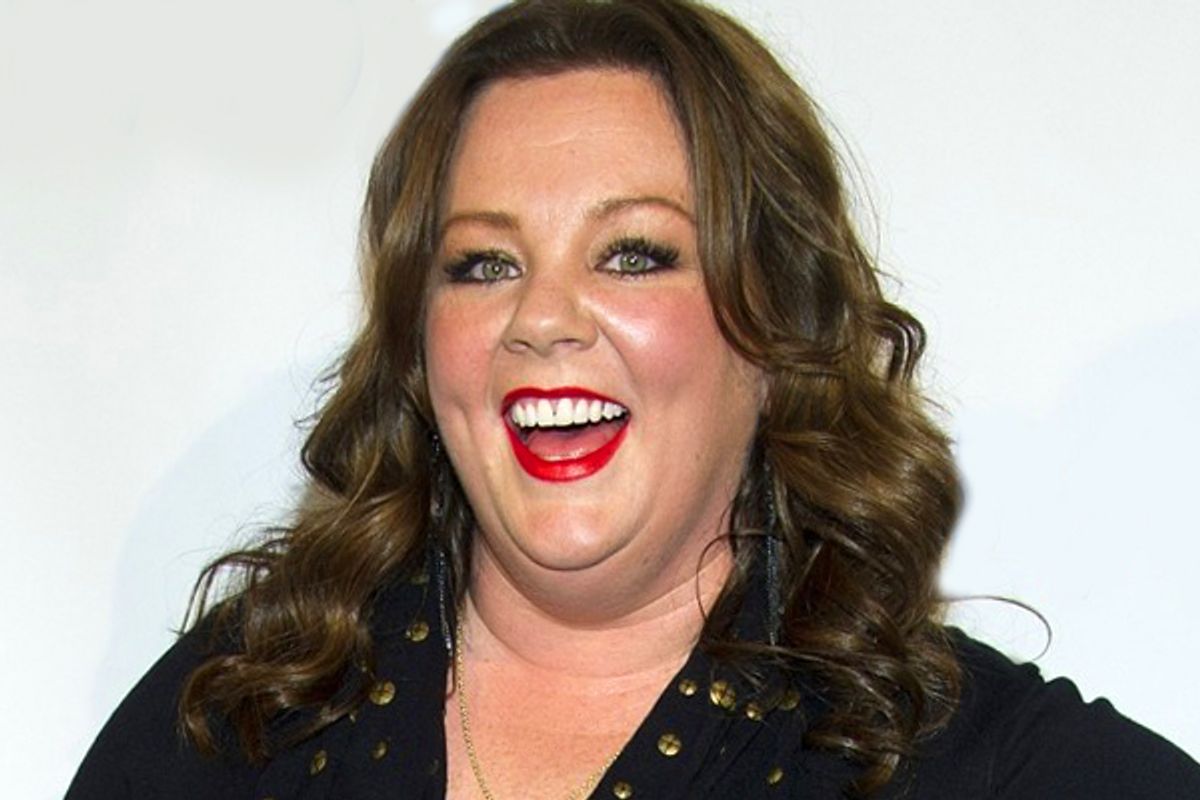 Melissa McCarthy doesn't get small parts. She stars in a sitcom about characters who met at Overeater's Anonymous. She does "Saturday Night Live" sketches that involve guzzling bottles of ranch dressing. As a result, she has faced her share of cruelty and stereotyping – most notably in 2010, when Marie Claire blogger Maura Kelly wrote a piece on "Mike and Molly" and declared herself "grossed out," not just by the idea of "fatties" kissing, but frankly by them "doing anything" at all.

But along the taunt-strewn way, audiences and critics began to take serious notice of a very funny actress. When "Bridesmaids" became a massive hit last spring, its success was fueled in no small part by McCarthy's fearlessly brash performance. (Once you know that McCarthy based her character on Guy Fieri, the entire thing gets that much more fantastic.) It wasn't just the ferocious comic energy that McCarthy put into using a sandwich as a sex prop or defecating into a sink that made her so instantly indelible. It was the way she gave Megan such a convincing heart. In a sea of poop jokes, she emerged as the most real character in the whole movie, the one you'd want in your own entourage.

And just as the long, golden popcorn days of "Bridesmaids" began to fade and her ride at the top seemed close to an end, McCarthy bested a posse of multiple-award winners -- Laura Linney, Amy Poehler, Tina Fey, Edie Falco and Martha Plimpton -- to win the Emmy for best actress in a comedy. Strutting onstage with the jokey props of a tiara and bouquet, she gushed with the unguarded enthusiasm of a true beauty queen. "I'm from Plainfield, Ill., and I'm standing here and it's kind of amazing," she said tearily, before threatening to "carry around" her colleagues later in the evening. By fall, she was hosting "SNL" and gracing the cover of Entertainment Weekly, crowned yet again as the new "Queen of Comedy."

So McCarthy's latest coronation as a best supporting actress nominee should come as no great surprise. Yet that in no way detracts from the awesomeness of it. It's a victory in a movie industry – and an awards system in particular – that is still dominated by a very specific physical type. The skinny kind. Though Gabourey Sidibe came close two years ago for "Precious," you'd have to go all the way back to Kathy Bates in 1990 to find an Oscar-winning best actress who might ever have darkened the door of a Lane Bryant. In McCarthy's category, there have been a handful of plus-size winners of late, including "Precious" costar Mo'Nique just two years ago. But though Jennifer Hudson was known for her big voice and frame when she collected her Oscar for playing the generously proportioned Effie in "Dreamgirls," she's since slimmed down enough to become a Weight Watchers spokeswoman.

It's not that the award bestowers don't love a big lady, or what passes for a big lady in Hollywood. It's that they just don't pay much mind to the authentic kind. Ten years ago, Renee Zellweger gained 30 pounds – and still looked like a pretty average-looking woman – on her way to an Oscar nomination for "Bridget Jones's Diary." A few years later, former model Charlize Theron bulked up and won the little golden man when she played serial killer Aileen Wournos in "Monster." It's not just the women, by the way; George Clooney added heft for "Syriana" and walked home a winner.

Looking at this year's nominees, the disconnect between the larger-size characters they play and their considerably smaller real-life size is hard to ignore. This year's single husky male nominee, Jonah Hill, has undergone a dramatic weight loss. Viola Davis packed on 25 pounds for her role in "The Help" – and still needed padding. Her costar and fellow nominee Jessica Chastain put on a mere 15 pounds, a feat she later complained was "a form of torture." McCarthy, in contrast, seems remarkably untormented. Yes, she admits there are times she would "love" for someone to think she looks a tad "emaciated," but as she declared in 2011, "I think the things that define me… are a lot more than those kinds of petty things."

A person's exterior is at once a "petty" thing and a primary one. It affects how the world treats her and how she chooses to respond in kind. And that McCarthy can be an Emmy-winning, Oscar-nominated, magazine cover-gracing, full-blown star without shrinking down to Keira Knightley proportions represents a consciousness shift not just in the culture at large, but in a business that associates success with being built like Jennifer Aniston. The nomination of McCarthy suggests that maybe the movies are finally acknowledging that human beings come in different sizes. (The fact that Rebel Wilson gets to be the bride in the forthcoming "Bachelorette" is an encouraging sign.) And though we'll have to wait until Feb. 26 to learn if Melissa McCarthy will take home an Academy Award, her uncompromising rise to A-list status already makes her not just a winner, but, beautifully, a big one.