Why shouldn't Demi Moore be "stressed"? 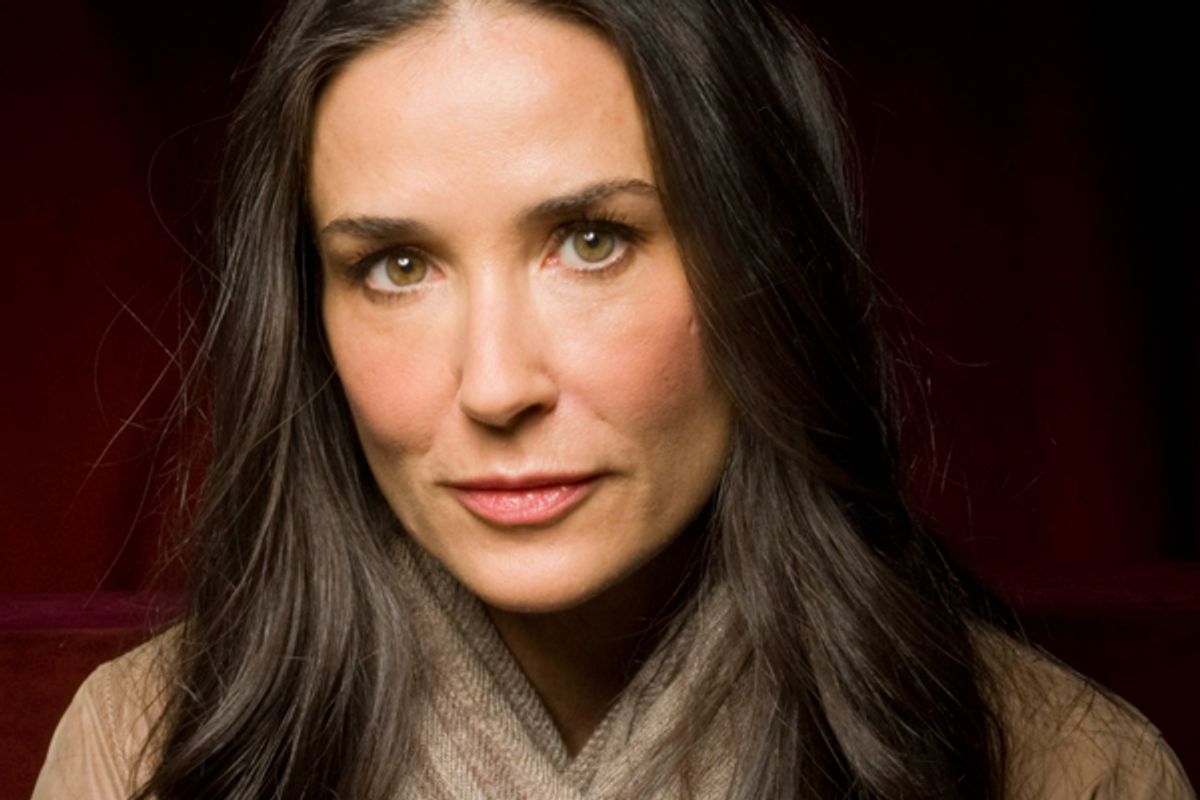 At 10:49 Monday night, a 911 call summoned an ambulance to the home of actress and producer Demi Moore. Within half an hour, a team was on the scene, had assessed her condition, and taken her to a local hospital. That's about double the amount of time it took for Internet critics to take aim at her.

In a cryptic statement Tuesday, a spokesman for Moore announced, "Because of the stresses in her life right now, Demi has chosen to seek professional assistance to treat her exhaustion and improve her overall health. She looks forward to getting well and is grateful for the support of her family and friends." She has since dropped out of the biopic "Lovelace," where she was set to play Gloria Steinem.

You don't have to be wearing a tinfoil hat to suspect there's more to the story than "exhaustion." Exhaustion doesn't usually merit a 911 call. And an anonymous source who claims to have seen the incident report told E! Tuesday that Moore was "shaking" and otherwise "acting like she was suffering from a seizure," which certainly sounds like something serious went down – and may have been part of a larger problem.

But from the moment the news broke, there was skepticism that a beautiful, wealthy woman -- even one whose recent divorce proceedings render her Twitter handle painfully obsolete -- could have it all that bad. The very first response on E!  was a weary "Stress? What stress? I swear, these Hollywood socialites wouldn't last a minute in the real world!" TMZ, where the story originally broke, had similar sentiments. "Stress? WTF! Obviously she hasn't been out in real America lately," wrote one disgusted commenter. On People, a commenter complained, "I am exhausted too. Where is my article in People?" while another said, "For rich people it's called exhaustion. For the rest of America it's called working a full time job, plus overtime, running a household, raising kids and paying your bills. Now I know why I am exhausted." A commenter named Lucy added, "Try working 2 jobs, 60 hours a week, looking after your own household with no hired help and tell me about exhaustion! " And at ABC News, a woman named Ann wrote, "I look frail and tired EVERY DAY. I am fed up with rich has-beens being a piece of 'news.'" Wow, all that real-world stress and exhaustion sure makes people angry.

The idea that a lady with an army of handlers to clean her mansion, iron her designer clothes, and mix up her cleanse shakes is stressed out may justifiably stick in the craw of anyone trying to wring one more winter out of that crappy pair of Payless boots. The story, for Moore's detractors, is black and white: Entitled woman with a jet-set lifestyle hits a bumpy patch when her marriage to her handsome TV star husband  flatlines, can't handle the "real" world, and has the luxury of retreating to some zillion-dollar-a-week oasis where she is no doubt right now getting a caviar and gold leaf facial – all while the rest of us are picking off-brand Cheerios out of the carpet.

Divorce, sickness, job insecurity and family obligations happen to the rich and poor, the famous and the obscure. And very, very few among us have the resources of a "Charlie's Angels: Full Throttle" star. There are no medals or cash prizes handed out for enduring hardship without a personal trainer or Kabbalah retreat. But it's certainly not as if a celebrity's choice to "seek professional assistance" creates a shortage of it for everybody else. Some movie star's in treatment? Oh well, dammit, now where are the rest of us supposed to go? She's doing something for her health? Gosh, what a bitch.

If, for whatever reason at all – the end of your marriage, the disappointment of a professional flop, the plain old chemistry in your brain – you were at the end of your rope, wouldn't the absolute best and smartest thing in the world be to get whatever assistance you possibly could? Or does having a big bank account somehow render an individual impervious to heartbreak or depression? Because I've got to say, based on what we know of celebrity, it does not.

There's still far too much stigma attached to the issues of mental and emotional health and illness. And the idea that anyone, regardless of fame or income, isn't supposed to be affected by profoundly life-changing events is absurd. Worse, it perpetuates the myth that getting help is for the weak. Just because you can afford "exhaustion," there's still no shame in having it -- and there's no shame in getting treated for it. Sure, most of us have to get through storms on the strength of our own, decidedly low-budget, counsel and support. But we still find it in our own ways, because we need to in order to survive. And those who don't aren't stronger or more "real" -- they just tend to become angry commenters on the Internet.